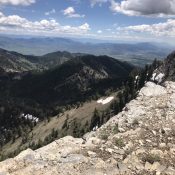 This peak is not in the book. Published November 2018

Peak 8540 is located just over a mile southeast of Elkhorn Peak. It sits on the Bannock Divide and is the high point of the Kents Peak massif. It is located about ½ mile north of Kents Peak (an unranked summit) on a connecting ridge. USGS Elkhorn Peak 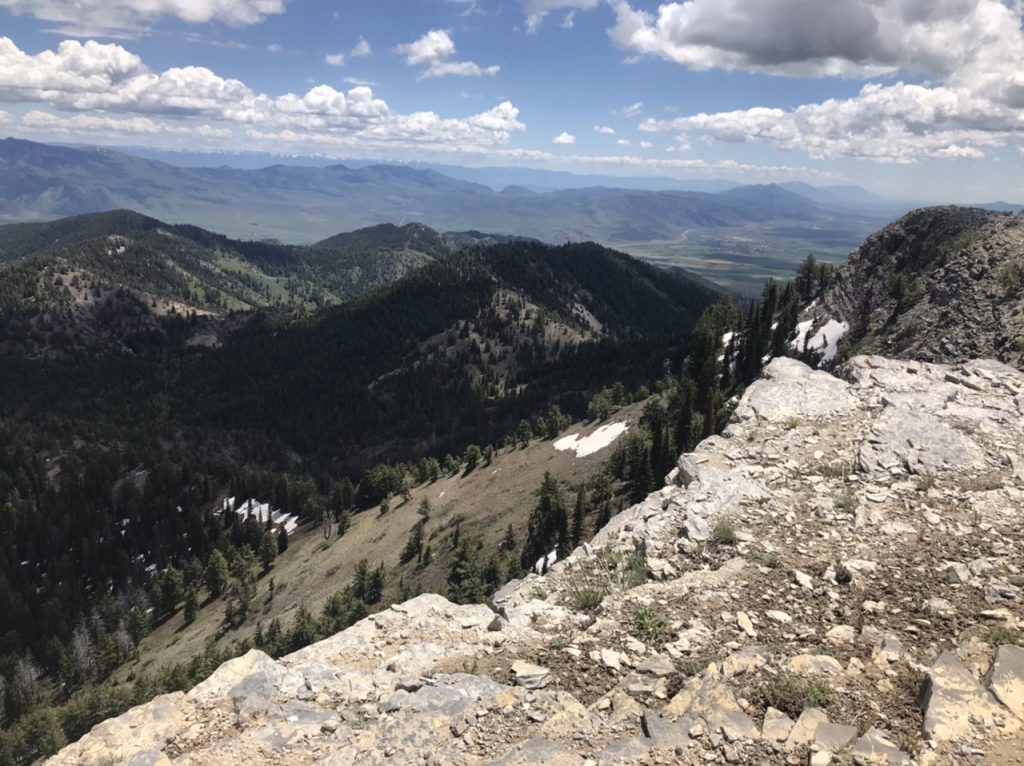 North Kents Peak as viewed from the summit of Elkhorn Mountain.

From the 7,980-foot connecting saddle with Elkhorn Mountain, bushwhack east up through a mix of semi-open desert scrub (on the right/south side of the ridge crest) and forest/blowdown/scrub (everywhere else). Higher up, boulders join the mix to make things more unpleasant. There are no game trails to assist you in this ascent. Once you reach the top of the West Ridge, the ridge turns right/south and you quickly reach the high point of Peak 8540. The true summit is on the ridge crest and is a ground boulder with a cairn atop it. The ridge crest at the summit area includes pine trees.

The north-to-south summit ridge leads to Kents Peak at its south end. Kents Peak is not a ranked summit and is only a ridge point. The summit ridge is forested on its west side and has open terrain (desert scrub + ground talus) on its east side.

Same as for the west ridge and the northeast face

This route is part of a ridge traverse from Peak 8540 to Kents Peak (and back). From the summit of Peak 8540, follow the ridge crest south-southeast in open desert scrub on the left/east side of the ridge. This is somewhat tedious as the desert scrub is thick and there are no game trails. The ridge crest itself is clogged with trees, blowdown, and scrub. As you approach Kents Peak, the trees disappear and it is open scrub to the gentle, scrub-and-broken rock hump that is Kents Peak. Thankfully, the ridge traverse only entails a half-mile of effort.

From the summit of Peak 8540, bushwhack northeast down through the thick forest (which includes veg and blowdown) to the elongated saddle that is at the head of Kents Canyon. There are no game trails to help you in this somewhat tedious bushwhack. As thick as the forest can be, it is a better choice than the semi-open terrain on the right/southeast side of the ridge crest. That terrain is comprised of thick desert scrub and involves side-hilling.

Upon reaching the elongated saddle, scramble over or around a treed hump (Point 8077) on the saddle then descend to the easy, open terrain of the narrow saddle itself. FST-334/Kents Canyon Trail crosses the saddle and is signed. Please note that the USGS topo map incorrectly positions FST-334 well away from the saddle’s low point. From the saddle, follow FST-334 northeast then north down the unnamed drainage that leads back to Mill Canyon and FST-333.