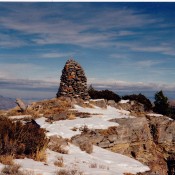 The route information in the book is still accurate with the exception that the Forest Service changed the trail numbers from 133 and 134 to 333 and 334. Many people climb this peak by looping over the peak, climbing Peak 8540 (North Kents Peak) along the way. I added a GPS for this loop below.

Livingston Douglas has provided a new, more difficult route up the peak’s east rib and he describes a descent down the south ridge. Updated June 2020

Elkhorn Peak is perhaps the most impressive Bannock Range summit. It has 3,515 feet of prominence which results in a view that encompasses a huge part of southeast Idaho as well as peaks in northeast Nevada, northern Utah, and the Salt River in Wyoming. USGS Elkhorn Peak 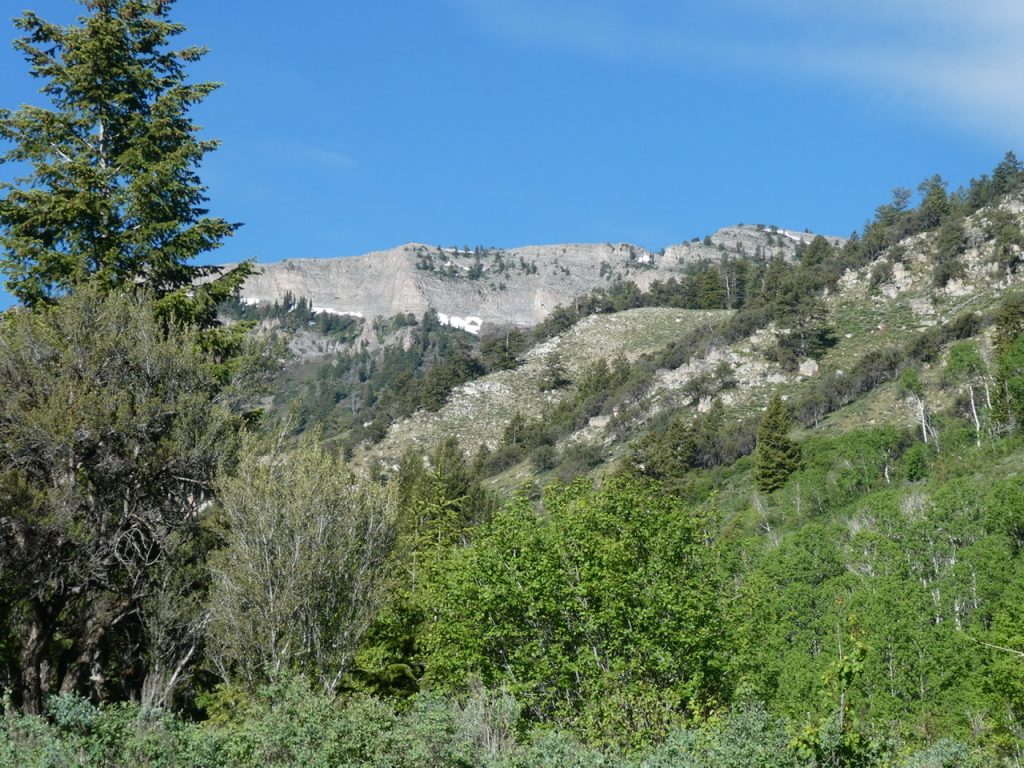 Livingston Douglas points out “Elkhorn Peak is the southernmost (and highest) peak on the Elkhorn Mountain massif. It is also called South Elkhorn Benchmark. It sits at the head of Mill Canyon and still has a massive cairn on top (as pictured above). The north ridge (described in the book) is the easiest route to the summit and can be accessed via FSR-333/Summit Canyon Trail. The east slopes (referred to in the book) are no picnic. There is a prominent cliff band high up on the east face that must either be climbed or circumvented.” 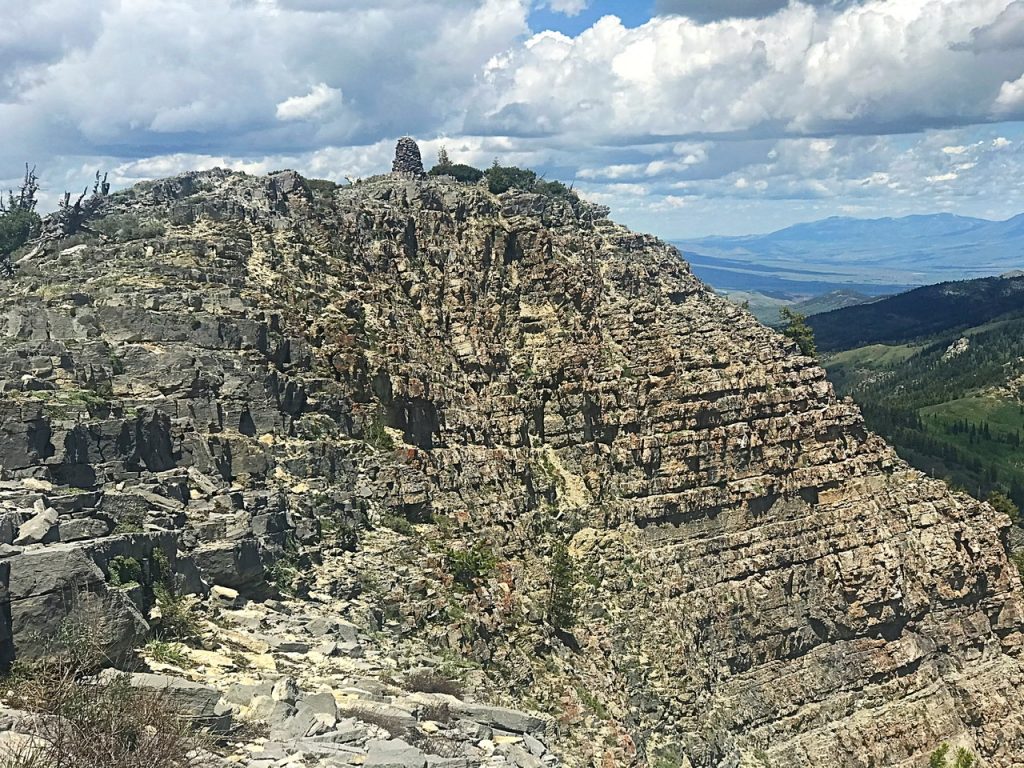 The summit of Elkhorn Peak

“In 1877, Henry Gannett and A.D. Wilson of the Hayden Survey used this summit and about 35 other eastern Idaho summits in their triangulation scheme. They called this peak ‘West Malade Peak’ and assigned a barometric elevation of 9,220 feet. The USGS benchmark in place is dated 1934 and is stamped ‘South Elkhorn.’ T.M. Bannon’s Elkhorn station is to the north, seen on the right in the photo. The summit of Limestone is crowned with a beautiful, well-constructed 9-foot high stone monument. The sheer east face of the mountain drops off from this point and is ‘Tetonesque’ in appearance. A pleasant circular hike, part trail, part cross-country, can be done from the east side of the mountain, starting above the Forest Service Campground.” 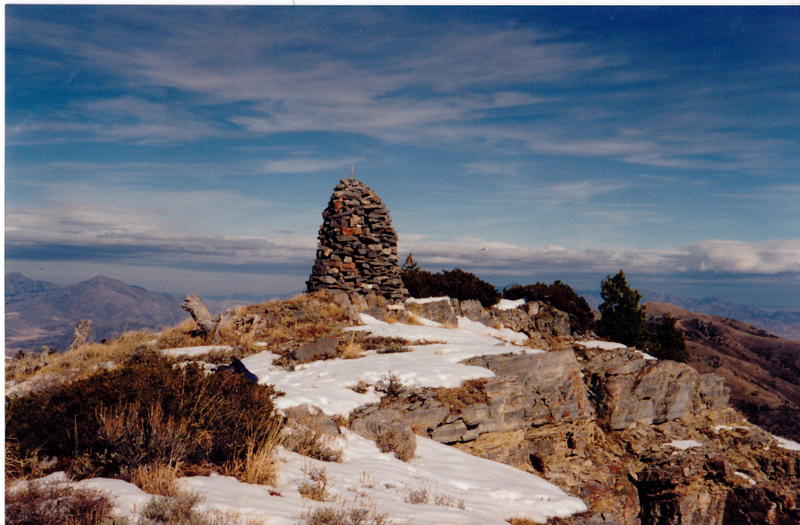 Malad Summit Road crosses over I-15 (no exit here). It is located 8.1 miles south-southwest of Downey on the Old Malad Highway. Set your altimeter to 0.0 at the junction of Malad Summit Road and the Old Malad Highway and begin your drive west up Malad Summit Road. At 2.1 miles, reach the Caribou National Forest boundary. The road now becomes FSR-041. At 3.0 miles, reach the Summit Campground (LHS of the road). The road gets much rougher after this point and is not advised for passenger vehicles. There is parking space for 1-2 cars at the entrance to the campground. There is an informal campsite on the RHS of FSR-041 about 0.3 miles before reaching the campground. You may be able to pull off and park here as well (or just across the road from it).

From the Summit Campground, hike (or drive) about a mile up FSR-041 to the [signed] trailhead for FST-333/Summit Canyon Trail. FST-333 is an old jeep road that is now an ATV trail. Hike up FST-333 for just over ½ mile to a signed junction in an open area where Mill Canyon forks. FST-333 goes up the right fork to reach the Elkhorn Divide at an 8,060-foot saddle. FST-334/Kents Canyon Trail (a MC trail) goes up the left fork and reaches an 8,020-foot saddle north-northeast of Kents Peak. Go LEFT onto FST-334.

Study the USGS topo map closely. Please note that the map spuriously shows “Power House Road” going from Mill Canyon up to the summit of Elkhorn Peak and then descending the north ridge of Elkhorn Peak. There is no such road/trail; it’s complete nonsense. Your objective is to climb the east rib of Elkhorn Peak. The east rib descends to the unnamed drainage that FST-334 follows. The toe of the east rib meets the [dry] drainage at a point where the drainage makes a sharp bend to the right/west. This point is at approximately 7,420 feet.

Hike south up FST-334 for about a mile to 7,420 feet in an open area at a sharp right/west bend in the drainage. Leave the trail and bushwhack briefly west (or northwest) up easy desert scrub to reach the forested crest of the east rib. There is open scrub/gravel on either side of the rib crest, albeit angled. The rib crest itself is clogged with trees and blowdown, so you must weave from side to side to find the optimal way to advance higher. Climb the rib west-southwest then west up to 8,000 feet. In this lower section of the rib, there is an obvious gully to the right/north. This gully disappears at the 8,000-foot level and, soon after that, the northeast spur merges with the east rib at 8,200 feet. At this juncture, another [larger] gully emerges on the right/north side of the rib. This wide gully dramatically cuts the east face of Elkhorn Peak.

The rib becomes well-defined here. The rib bends hard left/south-southwest to skirt the right/north side of Point 8276. Once past this point, the rib turns back to the right/west and is now heading due west. Continue west up the rib crest through a flattish section. The rib soon steepens and a massive ridge buttress blocks your way at 8,400 feet. Skirt the left/south side of this rocky buttress/cliff and return to the rib crest by climbing a steep talus/scree + scrub mix. The footing is rather loose here, so be careful. The rib steepens considerably here. At 8,900 feet, you reach the crux of this climb—a 50-foot headwall. As you climb the upper section of the east rib (above Point 8276), you can’t help but notice a cliff band that runs across the entire east face of Elkhorn Peak. The cliff band is worse the farther north it goes.

This cliff band has moderated somewhat by the time it reaches the east rib, but it is still a serious obstruction. To surmount the headwall, climb up onto the first ledge (Class 3) and move left/south on the ledge to find a break/crack in the sheer face above you. Find a diagonal, rightward crack in the cliff face. The footholds on this 15-foot section are meager and the handholds are even more precarious. The moss and veg on the scanty ledges and protrusions make things even more problematic. This is full-on Class 4 work with exposure. It is short-lived but it will test your climbing skills, particularly when wearing large boots. Once atop this testy pitch, the slope moderates a bit and the climbing isn’t too bad. You are still on talus and slab rock, but it goes quickly. You reach the top of the headwall about 50 feet above its base.

Same as for the east rib. This route is part of a ridge traverse from Elkhorn Peak to Peak 8540.

This route is part of a ridge traverse from Elkhorn Peak to Peak 8540 and Kents Peak. It follows the south ridge of Elkhorn Peak to a ridge corner at 8,620 feet then turns sharply left/east to descend to a small saddle at 8,180 feet. On the USGS topo map, this looks like a pretty straightforward proposition. In reality, it is much more tedious and difficult than that.

From the summit of Elkhorn Peak, follow the narrow ridge south for about 0.8 miles to a ridge corner. The upper section of this descent is on slab rock, broken rock, and short scrub (easy stuff). But you are soon dealing with hidden cliff bands that must be navigated. Downclimb the left/east side of the first cliff band. The second obstruction is a set of two ridge blocks. Descend a crumbly chute between them on the right/east side of the ridge crest. From the bottom of these blocks, the desert scrub gets thicker and rougher. When you reach the ridge corner at 8,620 feet, turn hard left/east and descend a very ill-defined ridge (initially a face) to a small saddle at 8,180 feet. 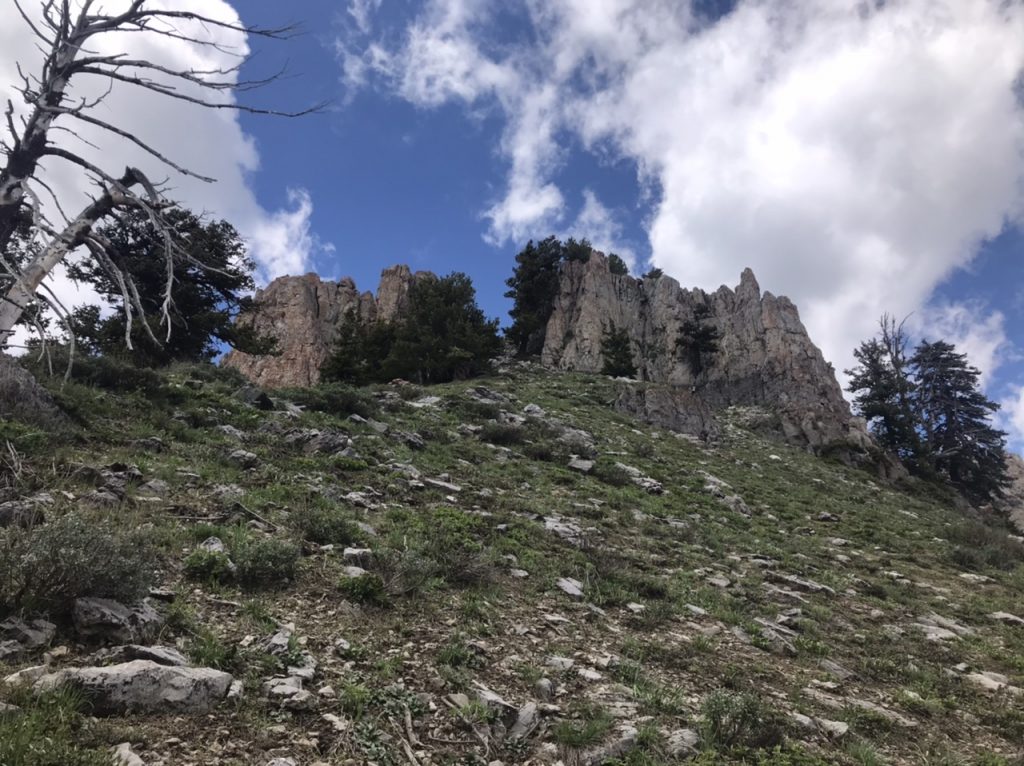 The Class 2 gully on the south ridge described by Livingston Douglas.

You cannot see the 8,180-foot connecting saddle from the ridge corner due to the forest that lies in between. Consequently, you must aim at Peak 8540 (the north end of the Kents Peak ridge). If you maintain an eastward line and aim at that high point, you should be fine. This section of the ridge traverse begins on open, thick scrub but soon you are battling your way through a dense forest (with tall, thick veg and blowdown mixed in). You may even encounter some side-hilling. The east spur becomes better defined just above Point 8404. Once you pass Point 8404, descend east to the small saddle. Thankfully, the saddle is wonderfully-open, easy terrain (broken rock and short veg).

Elkhorn Peak is situated above the Mill Creek in a manner the makes a loop route route feasible. I recommend doing the loop in a counterclockwise direction. Follow FST-333 to the saddle on the peak’s north ridge. Climb south up the ridge line to the summit. The north ridge is mostly open terrain but you will encounter patches of brush and some downfall. Descend down the south ridge until you can drop into the saddle west of Peak 8540 (North Kents Peak). Climb over North Kents Peak and then descend its brushy east ridge to FST-334. Follow the trail back down to the trailhead. 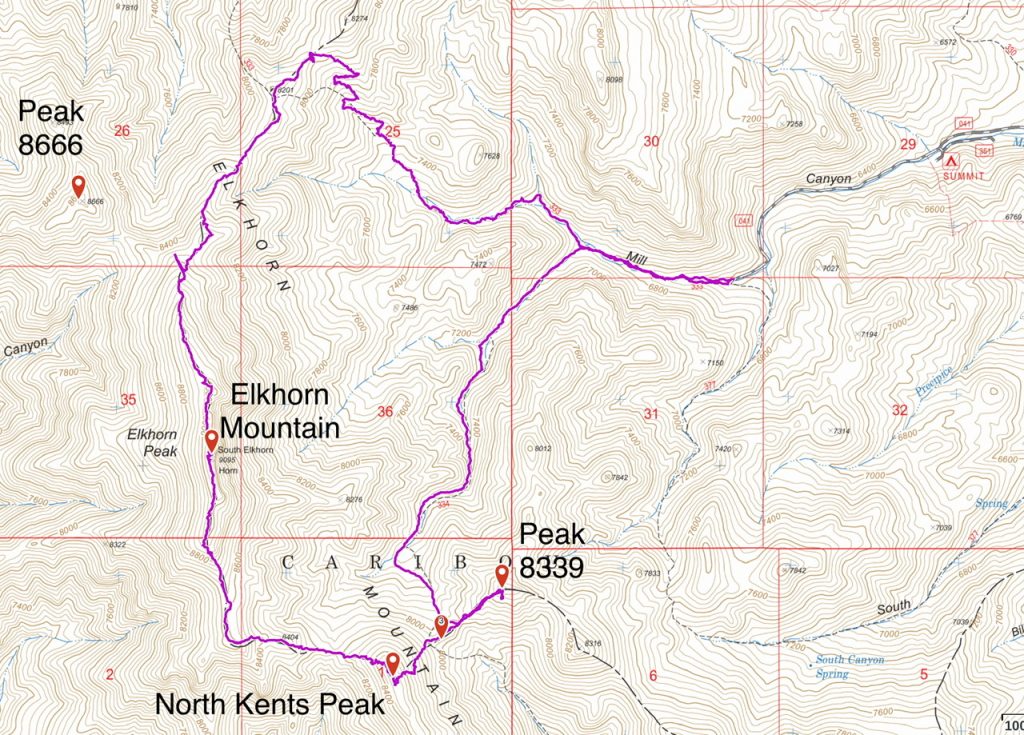