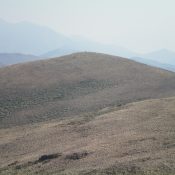 This peak is not in the book. Margo Mandella and Livingston Douglas contributed the peak, access, and route information found below. They both linked Peak 8566 and Peak 8620 together but in opposite directions. Updated November 2021

Peak 8620 sits above Smiley Meadows and Smiley Creek and southeast of Smiley Mountain. The high point is the rocky southwest summit outcrop, NOT the “official” northernmost hump. Stand on both points just to be sure. The summit provides excellent views of nearby Smiley Mountain, the White Knobs, and other interesting peaks above Bear Creek Road. Peak 8620 makes for a good climb when combined with nearby Peak 8566.

Livingston Douglas notes that the “official” summit hump isn’t the high point: “Good thing I carry an altimeter to figure things out like this. The summit covers a vast area with lots of optical illusions. You will need a GPS or altimeter to determine the true high point(s). Visuals can be deceiving on this summit plateau with its many humps.” USGS Smiley Mountain 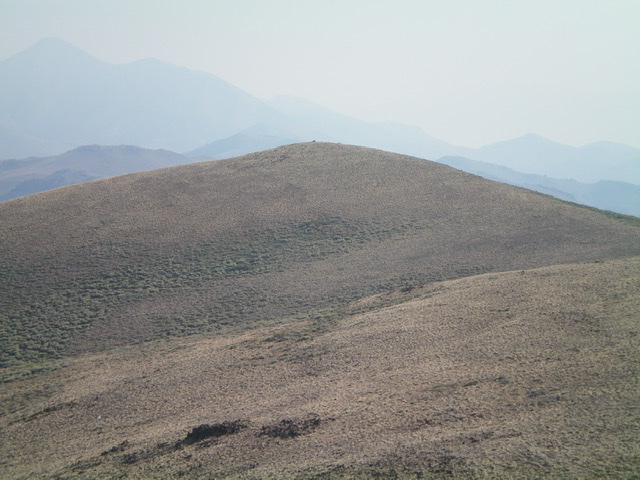 The official summit hump of Peak 8620. It is about 5-10 feet lower than the rocky outcrop that is the true summit. Livingston Douglas Photo 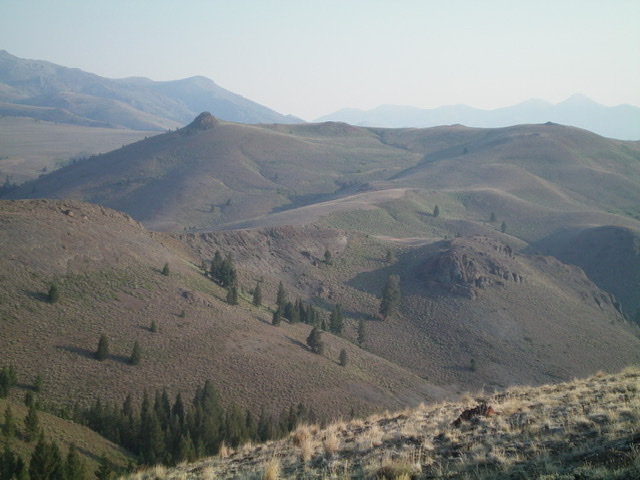 Peak 8620 as viewed from the south. The official summit is the minor hump just right of center on the skyline in the distance. The actual summit high point is the rocky outcrop at far left. Livingston Douglas Photo

Turn off US-93 10.5 miles north of Arco and follow Antelope Creek Road west into the mountains. At the Antelope Guard Station, continue on FSR-137 to Iron Bog Campground. Continue to a fork in the road marked FSR-221 and stay to the right. If you take the next unmarked fork to the right, you will bypass a short section of rugged, high-clearance 4WD terrain. You can pull over and park before this fork rejoins FSR-221, as a high-clearance 4WD is best from this point on.

Continue along a narrow road section that passes through willows and reach the creek crossing. The creek bottom is rocky and travel through it is good. The question is whether you will be comfortable driving up the bank on the other side where good 4WD skills and high clearance are required. You can easily hike along the creek to evaluate the creek exit. When you cross the creek, either by vehicle or foot, you are at another fork. At this fork, stay right and park at the “no motorized vehicles” marker.

From the marker, follow a fairly well-travelled pack trail that runs north and parallels Smiley Creek to a flat, thinly-willowed creek bottom at about 7,600 feet where you can easily cross. We were also climbing Peak 8566 and decided to head toward Point 8083 so that we could look around at all the ridge options and features. Follow the south ridge to the summit. Our track shows where we meandered and scrambled on interesting rock outcroppings. There was a medicine bottle register in the summit cairn where Rick Baugher dubbed the peak “Smiley Mountain Meadows Peak.” 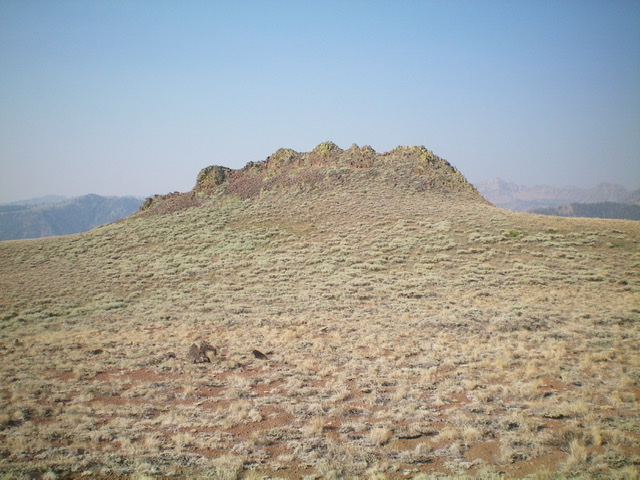 The true/south summit of Peak 8620 is this rocky outcrop. It measures 5-10 feet higher than the official/north summit. Livingston Douglas Photo

From the 8,140-foot connecting saddle, scramble north up the easy scrub on the ridge crest to a rocky ridge point at a juncture in the ridge. This point seems to be the high point of the expansive summit plateau. But, alas, it is not. The official summit hump is about a half-mile to the northwest and appears to be a bit lower in elevation. But that is an optical illusion since the official summit measures 40-45 vertical feet higher, according to my altimeter. There is another rocky outcrop (much more substantial) to the west. Perhaps it is the high point?

Scramble northwest and skirt the left/south side of a gentle hump then drop to a saddle and continue northwest to the official/northernmost summit hump. The terrain here is typical sagebrush. The official summit is a gentle hump of short scrub and has a large cairn. The southwest summit is an impressive rocky outcrop that has the same final contour line (8,600 feet). It appears to be slightly lower than the official/north summit. Well, let’s check it out. From the north summit hump, head south across sagebrush down to the final saddle then southwest toward the rocky southwest summit. 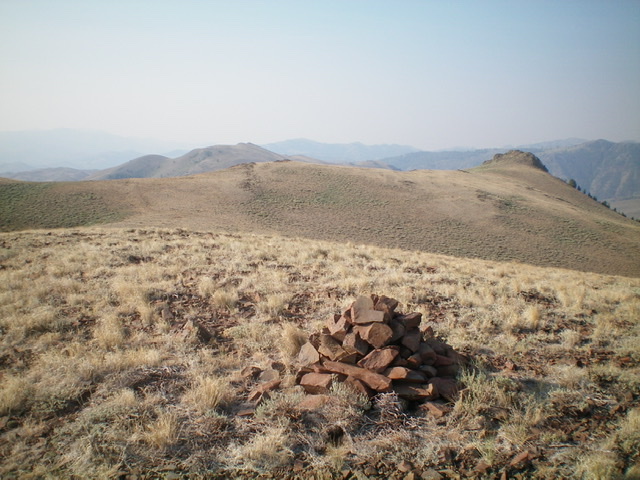 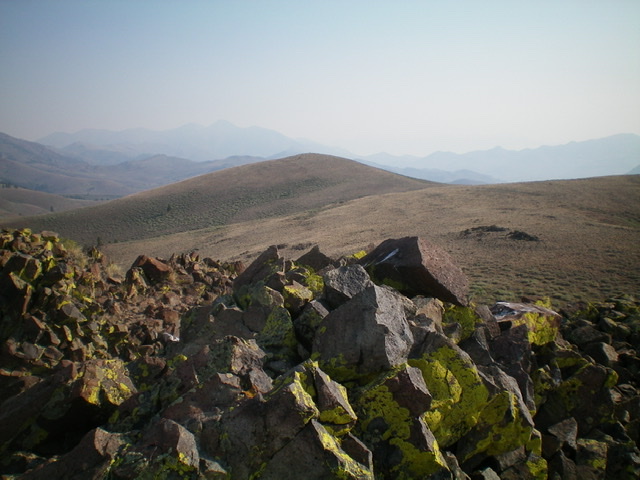 From the true/southwest summit, downclimb east from the rocky outcrop onto the sagebrush slopes below. Descend east and cross a gully with a small stream in it. Contour east then south onto the south ridge. Follow the open scrub of the south ridge down to the connecting saddle (Saddle #2). Continue south along the ridge to Saddle #1, after crossing a rocky ridge outcrop on the way. Saddle #1 is just northwest of Peak 8566. To return to the Iron Bog Campground and your parked vehicle, head southwest along a sagebrush-covered ridge to a ridge point at 8,300 feet.

From there, descend a shoulder that heads south then southwest down to Smiley Creek. This shoulder is a mix of scrub, loose scree/gravel, and some rocky ridge outcrops. Descend into the forest below and bushwhack west through the easy pine forest to reach the east side of Smiley Creek. Follow a cattle trail downstream until Smiley Creek bends left/southeast. Bash west through a mess of aspens, willows, bushes, and brush to cross to the west side of Smiley Creek. Once across the creek, you reach open terrain and an old jeep road. Hike south on the jeep road as it follows Smiley Creek downstream. The road merges into a forest service road, which soon merges into the main forest service road just above the Iron Bog Campground. Walk another 0.2 miles southwest down this road to your parked vehicle at the entrance to the campground.