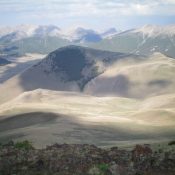 Peak 9053 is located south of Peak 8937 in the Lost River Range. Class 2 approaches are from the north and west. The north approach is relatively treeless and provides good views of Lost River Range peaks throughout the climb. We climbed Peak 9053 as a loop with Peak 8937 to the north. Another ranked peak, Spring Hill, can be added to this loop. If the weather had been better, we would have bagged that too. You can also 4WD to the base of Spring Hill from the south. From there, you can crawl towards both Peaks 8937 and 9053, shortening your climb of all three peaks. USGS Doublespring 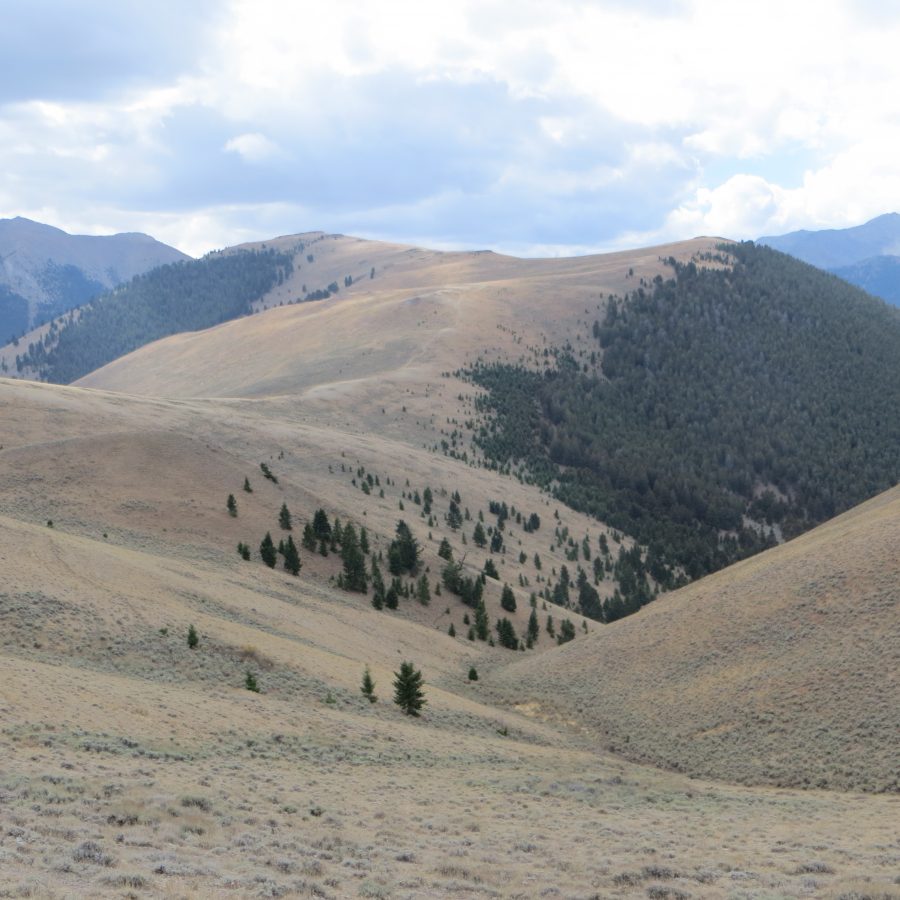 From your parking spot along 308, climb up the track until it disappears. Head to the saddle area around 8,200 feet. As you head south (toward the North Ridge of Peak 9053), you will encounter a jeep track that ascends partially up the mountain. Stay on the track for a while and then bushwhack directly through easy vegetation to the flat summit.

We combined our climb of Peak 9053 with Peak 8937 to the north. Our GPS track below is missing the descent from Peak 9053 to our vehicle. We descended via the west gully, right near the “T” in Forest on the track. You can also ascend this gully, but it is steeper than the north approach. From the summit, you have nice views of the north side of Mount Borah and Mountaineer Peak as well as other surrounding 10K and 11K peaks. You might also catch a rainbow. 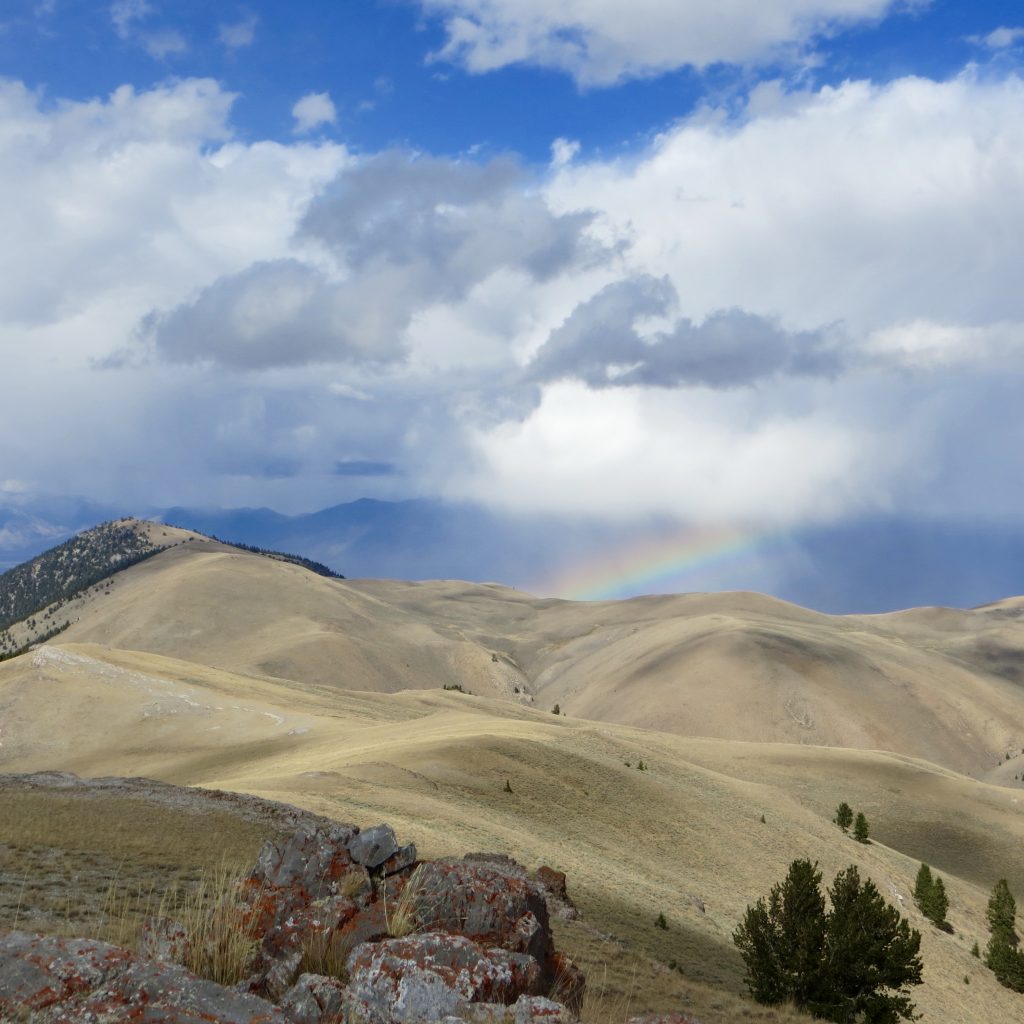 Sometimes your summit views includes a rainbow. Photo from the summit of Peak 9053. Peak 8937 is the semi-forested high point at upper left. Steve Mandella Photo 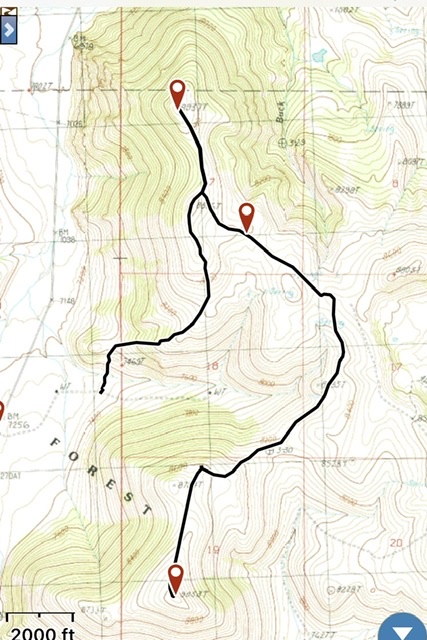 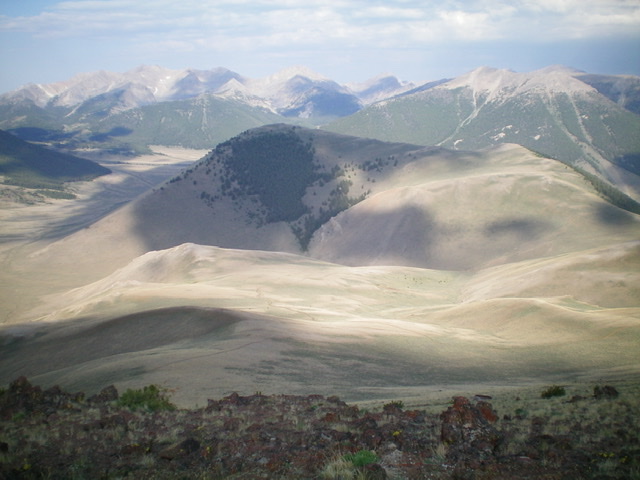 Peak 9053 (semi-forested in mid-ground, just left of center) as viewed from Spring Hill to its east. Livingston Douglas Photo

Park at an unsigned junction along Doublespring Pass Road/FSR-116 that is located 2.4 miles south of Christian Gulch Road and 1.4 miles north of Horseheaven Pass Road/FSR-117. The elevation at the junction (and base of a 2-track road heading east) is 7,275 feet. This old 2-track road is shown on the USGS topo map and goes to a water tank and then up the south side of a gully that separates Peak 9053 from Peak 8937.

From the road junction, follow the 2-track east briefly then leave it to hike cross-country through gapped sagebrush to reach the base of the steep, but open, west face of Peak 9053 just left/north of a gully and north of the thickly-forested northwest face. Grind slowly east up the easy scrub and broken scree with a few scattered pines to skirt. Reach the north ridge just above (and right/south of) the saddle that separates Point 8794 from Peak 9053. Scramble south up the easy scrub/grass and broken scree on the ridge crest to reach the small, rocky outcrop that is the summit of Peak 9053. The summit has a small cairn. 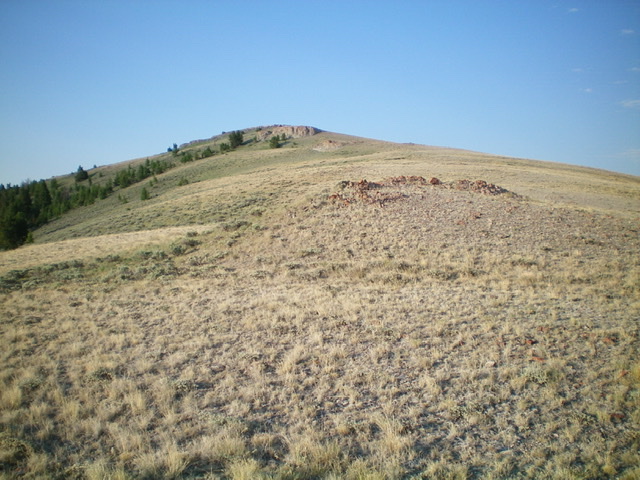 Looking back up at the summit cap of Peak 9053 from high on the north ridge. Livingston Douglas Photo 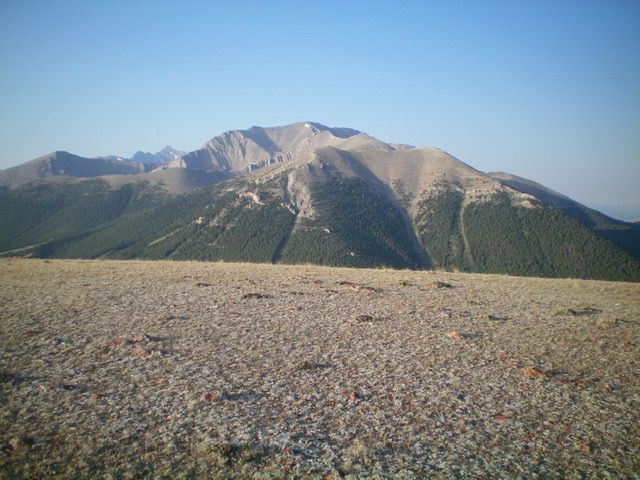 Looking southeast from the gentle summit of Peak 9053. The north end of the Lost River Range is in dead center. Livingston Douglas Photo 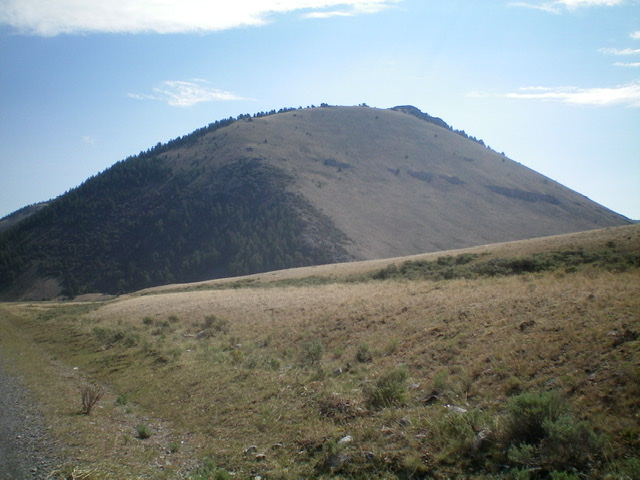 The clean, open southwest face of Peak 9053 as viewed from Doublespring Pass Road. The west ridge looks like a good alternative to the north-side ascent routes typically taken. The west ridge is in the center and center-left of the photo. Livingston Douglas Photo

Descend the north ridge back to the saddle between Peak 9053 and Point 8794. Skirt the east side of Point 8794 and descend diagonally right/northeast to reach the east ridge of Point 8794. Follow a faint 2-track on the ridge crest northeast down to a saddle where a good jeep/ATV road (not shown on maps) comes up from a gully to the south. This is the 8,220-foot connecting saddle between Peak 9053 and Spring Hill. It concludes the first leg of today’s 4-peak journey. Spring Hill is up next.