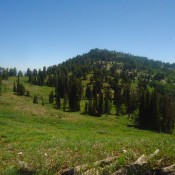 This peak is not in the book. Matt Durant and Livingston Douglas provided the following valuable updated information. USGS Paris Peak. Updated October 2018 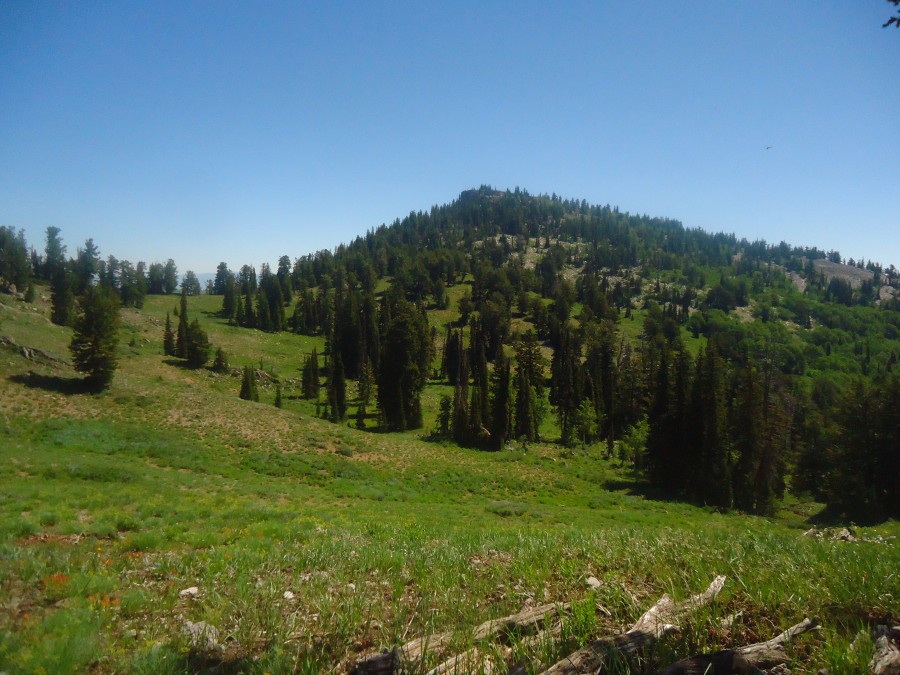 Please refer to the revised/updated access comments for Paris Peak. Park at the well-signed Paris Peak Trailhead located along Bloomington Canyon Road. The trailhead elevation is 7,250 feet. If Peak 9270 is part of a ridge traverse from Paris Peak, you will get a good look at the south ridge from the northwest face (or north ridge) of Paris Peak. Peak 9270 is a pile of white quartzite rock, which is also a common feature of some other peaks in this area (e.g., Peak 8963 and Peak 8852 as well as the upper reaches of Paris Peak).

From the Paris Peak/FST-340 Trailhead, hike up the ATV trail for about three miles to the pass at 8,820 feet. From the pass, scramble northwest up over a rocky ridge point almost immediately then drop 40 feet to a minor saddle on its north side. While you can skirt this point on its right/northeast side, it’s not worth the extra effort and the side-hilling involved in doing such [I know because I skirted its northeast side on the descent]. From the minor saddle, the ridge bends right/north. Scramble northward up the ridge, staying right/east of the ridge crest on easy, open terrain consisting of embedded ground boulders and easy veg. The ridge crest itself is a mess of pine trees, boulders, and veg, so avoid it all costs. The ridge crest IS helpful in blocking the westerly wind that so often blows across Idaho. The ridge offers a nice wind break on a chilly, windy morning like the one I had when I was doing this climb.

Higher up, the scrambling becomes much rockier, initially with some minor cliff bands (easy to either climb up over or to skirt to the right/east) and later with large, white quartzite boulders. Nothing worse than a moderate Class 2 effort. The summit of Peak 9270 is an airy, windy perch with fantastic views down to Paris Canyon. The summit has a modest cairn with a tree branch poking out of it. On the descent, be sure to stay far enough right/west to reach the rocky ridge point that you scrambled over at the beginning of this route. Otherwise, you will end up in less pleasant terrain on the east side of the aforementioned point. The descent back to the pass takes only 15 minutes or so. The hike down the ATV trail back to the Paris Peak Trailhead takes just under an hour. By this route, Peak 9270 is probably the easiest ranked summit to climb in this area.

This peak shares a major saddle with Paris Peak a mile to the south but has enough prominence (450 feet) to qualify as a peak on its own. Approaching from the saddle between the two peaks is quite easy. All one has to do is walk up the gradual rocky incline to the highest point. The north face of the peak is a large cliff face that looks like an extended rock wall above Paris Meadows to the north. There is some potential for some shorter rock routes on this face but there are no recorded ascents or even attempts that I am aware of. The view from the summit is awesome. It is a great place to go to sit on the edge and take in the valley below. I’m sure there have been people on this summit before but I could find no record of it. It is generally overlooked for the higher and more prominent Paris Peak nearby.

From US-89 in Bloomington, ID, turn west onto the signed Bloomington Canyon Road and follow this road for approximately 7.5 miles past the National Forest Boundary and park in the developed Paris Peak Trailhead parking lot. The North Fork Bloomington Canyon is the drainage to the south. This drainage gives you access to all the peaks in this area including Paris, North Paris, Whiteface, and Castletop. For Paris and North Paris, simply follow the ATV trail to the meadow between the two peaks and then work your way to the summit of either peak.

Whiteface and Castletop can easily be combined with Paris and North Paris for an amazing traverse by following the ridge that leads west from North Paris and continuing on the same ridge as it circles back to the summit on Castletop and then back down to the trailhead. For an ascent of Whiteface only, work your way up the North Fork Bloomington Canyon, all the way to its end and then ascend the peak from the south. For Castletop, simply cross the bottom of the canyon and work your way up the open ridge to the northwest of the trailhead.