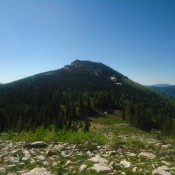 Climbing and access information for this peak is on Page 365 of the book. Matt Durrant and especially Livingston Douglas have provided updates which will help you explore this mountain. Livingston points out that the peak’s summit block is a difficult Class 3 bushwack rather than the Class 2 rating found in the book. USGS Paris Peak. Updated October 2018

Paris Peak sits at the north end of the Bear River Range with a group of three other peaks (North Paris Peak, White Face Peak, and Castletop Peak) which can all be climbed in one long day. 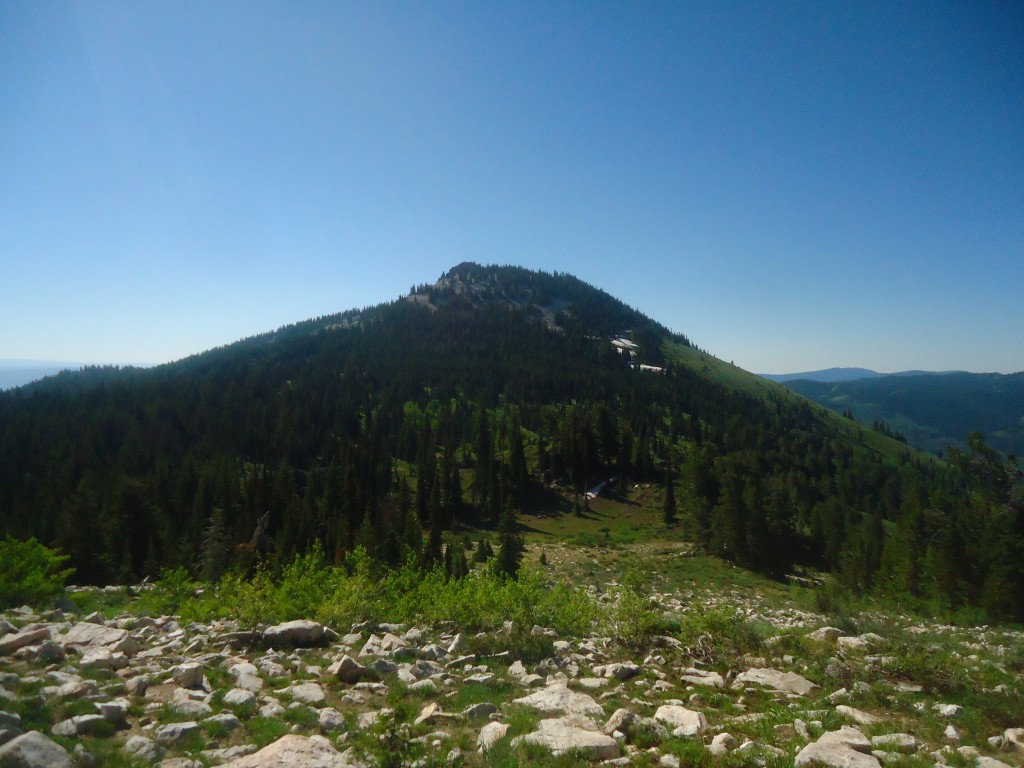 Map of peaks in the northern reaches of the Bear River Range. Matt Durrant Map

From US-89 in Bloomington, ID, turn west onto the signed Bloomington Canyon Road and follow this road for approximately 7.5 miles past the National Forest Boundary and park in the developed Paris Peak Trailhead parking lot. The North Fork Bloomington Canyon is the drainage to the south. This drainage gives you access to all the peaks in this area including Paris, North Paris, Whiteface, and Castletop. For Paris and North Paris simply follow the ATV trail to the meadow between the two peaks and then work your way to the summit of either peak.

Whiteface and Castletop can easily be combined with Paris and North Paris for an amazing traverse by following the ridge that leads west from North Paris and continuing on the same ridge as it circles back to the summit on Castletop and then back down to the trailhead. For an ascent of Whiteface only, work your way up the North Fork Bloomington Canyon, all the way to its end and then ascend the peak from the south. For Castletop, simply cross the bottom of the canyon and work your way up the open ridge to the northwest of the trailhead.

These comments are based on my August 2018 ascent of the west face and descent of the northwest face. Each of these routes gave me a good look at the two routes covered on Page 365 of the book (south ridge, north ridge). Neither of these two routes is of Class 2 difficulty. Paris Peak is a Class 3 endeavor from any direction due to its summit cap. The final 150 feet (vertical) of this mountain is a pile of boulders/blocks with ample amounts of trees and blowdown thrown into the mix, spread over a wide area due to a moderation in the slope. Mountaineers call this the TRIFECTA OF MISERY.

It’s one thing to scramble up a boulder-strewn summit. That alone might be easy Class 3. But when you throw trees and blowdown on top of the boulder field, the difficulty level goes to hard Class 3. And to do it for a prolonged stretch (several hundred yards) makes it a real test. Such is the case with Paris Peak. The final summit blocks alone (15 vertical feet) are a Class 3 scramble from any direction. This mountain has a tedious finish. Trust me. It seems as though you are in the middle of a Battle Royale and you will never reach the summit.

The south ridge probably IS of Class 2 difficulty up to the summit cap. However, it climbs up through thick desert scrub (as on the southwest face) and there is a steep section in the 9,000 to 9,200-foot area that may require the use of your hands. It also has a few rocky outcrops on the ridge crest itself (which can probably be avoided on the left/west side of the ridge). The north ridge is AT LEAST Class 3 difficulty. I intended to descend the “Class 2” north ridge but opted for the easier northwest face, which is a full-on Class 3 descent on steep boulders high up. The north ridge is very clogged with trees and blowdown on top of steep boulders. Perhaps below 9,100 feet that ridge is Class 2, but it most certainly is NOT Class 2 above the 9,100-foot level. From the open terrain of the upper northwest face, I got a good look at the north ridge to the right.

Take this mountain seriously and prepare to be abused by thick desert scrub and then a lengthy, full-on Class 3 scramble up the boulders/blocks amongst the thick trees and blowdown. Please be cautious with this mountain, no matter which route you take. Thankfully, the summit is clearly marked with a repeater antenna and a USGS benchmark on a summit boulder, so you need not thrash around in the thick forest/boulders trying to locate the high point.

Updated/Revised Commentary on Paris Peak Access:  Bloomington Canyon Road (called Bloomington Creek Road in the book) begins at the south end of Bloomington, ID on US-89. It is signed and is exactly 17.0 miles north of the junction of US-89 and US-30 in Garden City, UT.

The Paris Peak Trail on newer maps is now designated as FST-340 (rather than FST-453 as the book states on Page 366) and is an ATV trail open to ATVs, MCs, hikers, and horses. Yes, it IS an old jeep road and is a wonderful hiking trail. It does not seem to see much ATV use. The old road offers outstanding views of the surrounding area once you get high up on it. FST-340 crosses an 8,820-foot pass on the northwest side of Paris Peak. The trail soon becomes a MC trail and drops northeast down a canyon to intersect Paris Canyon Road (according to the Forest Service map and the Trails Illustrated Logan/Bear River Range map). The elevation at the trailhead is 7,250 feet.

From the Paris Peak/FST-340 Trailhead along Bloomington Canyon Road, hike up the ATV trail for about 2-1/2 miles to about 8,550 feet. This departure point is at a point where the west face opens up, just past a section of forest on the east side of the trail. While the face is quite steep here, the terrain is open (mostly sagebrush). Put on your gaiters. The punishment is about to begin. Climb straight up the steep slope through thick sagebrush. You won’t get any help from game trails or cattle trails. Not even they are foolish enough to be found here. The slope is so steep that there are times when you must grab the sagebrush to pull yourself upward and/or to avoid slipping downward. That being said, it goes. Keep grinding eastward, aiming for the forest that lies at the top of the open terrain.

The steep terrain changes over to a mix of forest (pines and aspens) and veg/desert scrub starting at about 9,100 feet. Large boulders soon join the mix and the climb turns into a Class 3 scramble. The slope steepens noticeably and massive blocks obstruct your ascent at about 9,300 feet. Work around these blocks on a combination of boulders and veg. Upon reaching the 9,400-foot level, reach a level, open field of sagebrush that lies at the base of the rocky summit cap. Cross the sagebrush and begin the final assault on a wicked mix of large boulders, pine and aspen trees, veg, and copious amounts of blowdown. Scramble east uphill to eventually reach the summit blocks. Scramble up a 15-foot, Class 3 rock chute on the west side of the huge summit boulder/block. Once on top of the summit block, find a USGS Benchmark nearby on a massive boulder to the east as well as a repeater antenna (+ storage box + 3 solar panels) about 20 feet away. Enjoy the nice views from the summit boulders, which protrude just above the nearby trees.

Same as for the west face

From the summit, descend west then northwest through a jumble of thick forest and boulders to reach the top of the northwest face of Paris Peak. Look for a large boulder field on the face and descend it to reach the forest below. It is steep and somewhat dangerous. The full-on Class 3 descent amongst these angled death traps, but it sure beats doing the forest-and-boulder combo elsewhere on the face or on the north ridge to the right/east. Go slowly down these massive boulders and watch your footing. As on the west face, the slope eases at about 9,150 feet and the forest takes over.

The boulders soon disappear and the bushwhack down to an 8,820-foot pass isn’t too bad. You will even find an old jeep road (not shown on any maps) crossing the face down near the pass. Follow this 2-track road right/north down to the pass and intersect the ATV trail (FST-340) which cuts across the pass. Go left/south onto the ATV trail to quickly reach the pass proper. From here, you can either continue southward down FST-340 to return to the Paris Peak Trailhead on Bloomington Canyon Road or you can mount an assault on Peak 9270 which lies just to the north.