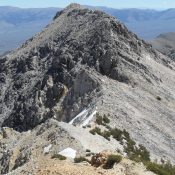 This point is not in the book. It is the East Summit of Gilmore Peak. Based on visual observation, there is a 50/50 chance that it is actually the highest point on Gilmore Peak. This route information was provided by Dean Lords. The peak is a part of the Gilmore Peak massif. Gilmore Peak is discussed on Page 304 of the book.

In 2013, there was a register on this point calling it Gilmore Peak. As noted above, it is difficult to determine if this point or the West Summit is the highest. The traverse from Gilmore Peak is a Class 2+ scramble. You will encounter one obstacle on the ridge. Bypass this obstacle on its South Side. USGS Gilmore 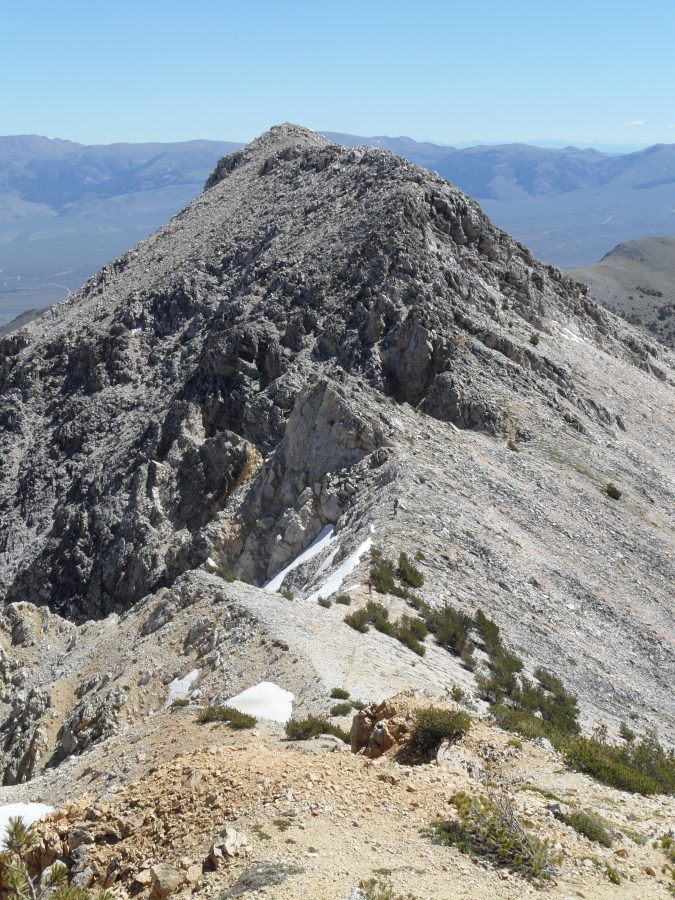 On the USGS topo map, Gilmore East is the main peak directly behind (south) of Meadow Lake. This route is easily identified looking south across Meadow Lake as the right-hand skyline with the obvious tower of rock (Cow Tower) at 2/3rds height on the ridge. The rock quality for the most part is pretty good with a fair amount of loose debris on the ledges. Protection is good but bring a variety of camming units.

Ascend talus slopes to the base of the Northwest Corner where one will start the route in a steep gully just to the left of the ridge. Ascend easy terrain just left of the ridge crest for several rope lengths, aiming for the large deep chimney (crux) on the upper reaches of the ridge. Belay under an overhang on the right side of the crux pitch.

The crux pitch follows a shallow chimney for half the pitch to where one exits onto a face and climbs the left side of the Missile (a long skinny detached block in the shape of a missile) crossing the top of it and into the deep chimney. Belay here or continue up the back of the chimney to a few overhanging moves (5.7 A0 or 5.8) into an off width that widens back to chimney size after several moves. This chimney is capped with a large chockstone which one can exit from underneath on the left and emerge on top of the Cow Tower. Ascend wide cracks above the tower to easier terrain and a few hundred feet of scrambling to the summit. Descend via the trail back to Meadow Lake.