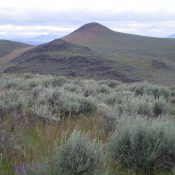 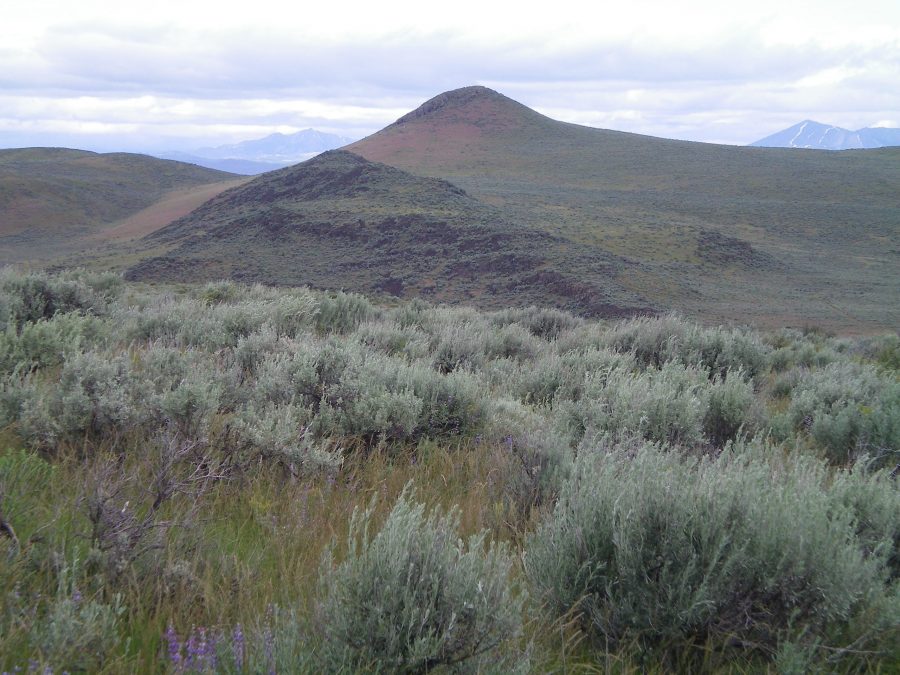 Rattlesnake Butte as viewed from the northeast shoulder of Dinosaur Ridge. The butte is dead-center with the reddish field grass on its south face. Avoid the rugged ridge section around Point 5105 (the blackish rock and scrub left of center). It is a tedious, difficult affair. Livingston Douglas Photo

Same as for the northeast shoulder of Dinosaur Ridge. This route is the next leg of a traverse from Dinosaur Ridge to Rattlesnake Butte. It begins at the connecting saddle between these two peaks.

From the connecting saddle/pass (4,830 feet), hike northwest up the ridge crest through reasonably easy field grass and sagebrush. The ridge narrows at 5,000 feet and becomes problematic because of rocky outcrops and cliff bands leading up to Point 5105. Skirt the right/east side of this mess and scramble through a difficult mess of scrub and boulders/talus. In retrospect, it’s best to stay well below this area by staying below 4,850 feet in open grass/sagebrush and working around to the north side of a shoulder protruding from the south end of narrow ridge crest area.

After skirting the right/east side of a massive band of dark brown/black rock, the terrain gets easier and you can work your way up onto a grassy saddle just north of Point 5105. From this saddle, scramble up a steepening face of easy, reddish field grass to reach the base of the summit cliffs. I didn’t encounter any rattlesnakes here but I did have two bull snakes slither by me as I ascended this warm, south-facing grassy slope. Once at the base of the summit cliffs, find a minor gully/chute and climb over some Class 2+ boulders to reach the rock-and-scrub summit area. There is no summit cairn on top as there isn’t much, if any, loose talus to work with here. Just boulders and thick scrub. The summit offers a stunning view of nearby Magic Reservoir.

Same as for the southeast ridge. This is the final leg of a loop route that begins and ends on Big Wood River Access Road near ID-75.

This route is a less cumbersome endeavor than the southeast ridge. From the summit, descend the southeast ridge down to the grassy saddle. Pick up a weak grassy path at the saddle and follow it southeast down the southeast slopes as it morphs into a 2-track road. Follow this road southeast then south past a cattle gate until it intersects Big Wood River Access Road a little ways east of the 4,830-foot connecting saddle with Dinosaur Ridge. Hike east on the Access Road for ¾ mile to return to your parked vehicle. 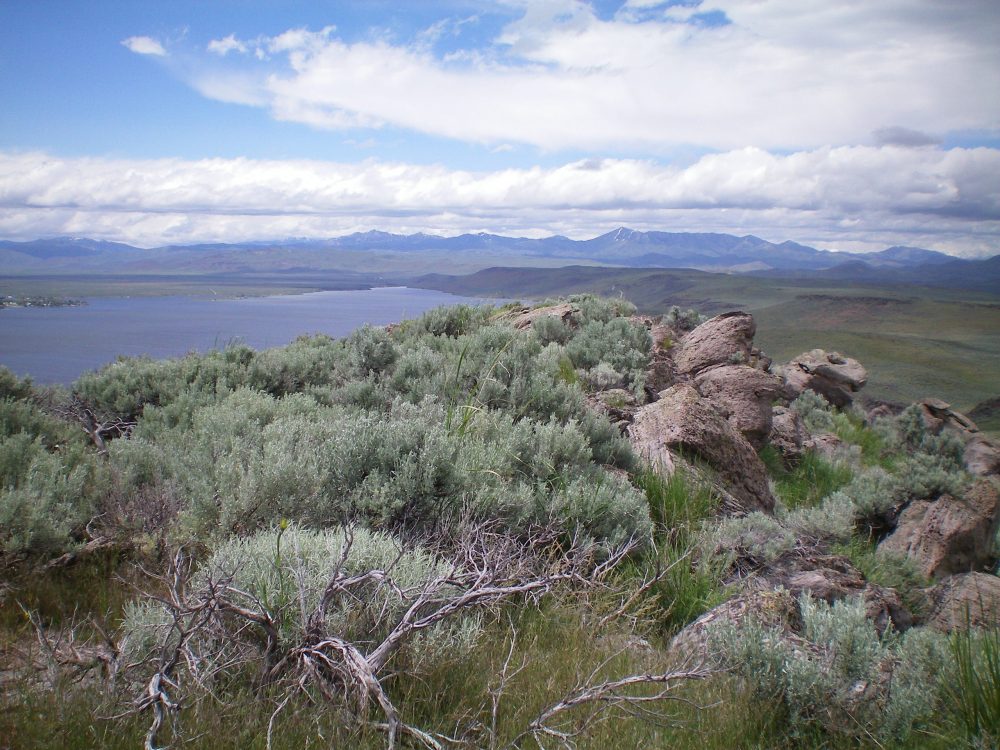 The summit boulders and scrub atop Rattlesnake Butte. Magic Reservoir is in the background. Livingston Douglas Photo