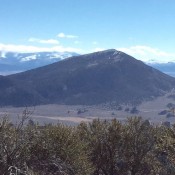 This peak is not in the book. Livingston Douglas provided the additional route the information found below. Updated November 2018

Smoky Mountain a big, somewhat-isolated peak located at the south end of the Albion Range near the village of Almo. While there is private property on all but the east side of this big juniper-covered mountain, the private property is within the City of Rocks National Reserve. Thus, access may or may not be allowed from other directions. Check at the Visitor Center if you want to climb the peak by crossing private property. The recommended route is to climb the peak from the Smoky Mountain Campground. The slopes are broad and many lines lead to the top. USGS Almo 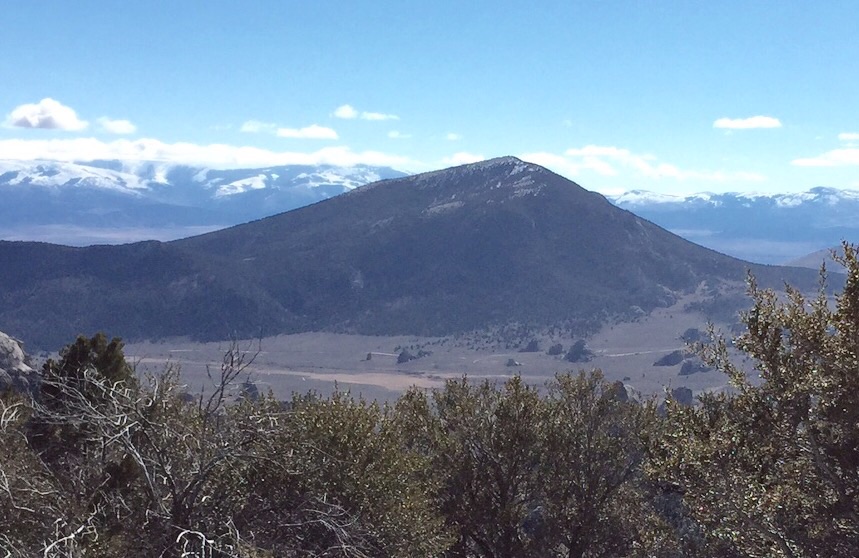 Smoky Mountain as viewed from the slopes of Graham Peak.

[Editor’s Note: the following routes, although within the City of Rocks National Reserve, cross private property. Please refer to the main Albion Range page and this website’s discussion of private property and trespass issues before following these routes.]

From the junction of ID-77 and Elba Road/1950 South in Elba, drive 12.7 miles south on ID-77 (passing through Almo en route) to a signed right/west turn for the City of Rocks National Reserve at 3075 South. This paved road is unofficially called the “City of Rocks Road.” Reset your odometer here. At 2.0 miles, reach the City of Rocks east entrance. At 3.2 miles, reach [signed] Camp Rock. Park here on either side of the road in a pullout. The elevation here is 5,880 feet. By the way, Camp Rock is not a campground. It’s a ROCK—a VERY BIG ROCK. That’s why this place is called the City of ROCKS.

This route begins at Camp Rock along the City of Rocks Road. This route crosses a short strip of private land near the City of Rocks Road. Please obtain permission from the landowner prior to ascending this route. Before beginning this climb, it is critical to take a good look at the convoluted, confusing, and ugly northwest face of Smoky Mountain. Camp Rock is a good place to do this. If you analyze the USGS topo map, you can see that there are some serious cliff bands and rocky outcrops on the northwest face and on the west ridge of this mountain. Choose a line that ascends the northwest face between a prominent rock buttress to the left/east and the rocky outcrops and cliffs of the north side of the west ridge to the right/west. From Camp Rock, you can visually see what the USGS topo map suggests.

Early on with this route, you are going to lose your visuals in the trees that cover the lower third of the face. That makes it more difficult to maintain a workable line but, thankfully, there is plenty of terrain between the obstructions to the west and east. My best advice is to establish a good line early and then just go straight up the slope to reach the summit ridge. I was very concerned that there would be hidden cliff bands in the forest, given how steep the slope becomes higher up. Those concerns were unfounded as there were no hidden cliff bands to surmount.

From the parking pullout next to Camp Rock, walk on a footpath along the east side of Camp Rock to pass by it. Leave the footpath once you reach the back side of the enormous rock. Bushwhack south-southeast across and up through thick, tall desert scrub. You will soon reach a thick forest. Unlike mountain mahogany, juniper branches are pliable and won’t poke a hole in your skin or your Gore-Tex jacket. Weave your way up through the junipers in a south-southeast direction. Your visibility is simply gone here. At about 6,200 feet, the forest steepens considerably and the junipers give way to mature pine trees.

By this point, you’ve reached the northeast face proper and the steep slope is heading southeast. Grind your way up through the pine forest, weaving around blowdown and thick scrub. Higher up, mountain mahogany shows up and complicates matters. The slope is very steep from 6,400 feet up to the summit ridge at about 7,150 feet. The USGS topo map makes the north ridge look like an open-terrain cruise to the top. Not true. While there are some sporadic sections of open terrain, the north ridge is mostly forested. And the open terrain is tall, thick scrub with no game trails to help.

When you reach the north ridge, bend right/south to follow it to the summit. Surprisingly, there are TWO north ridges, separated by a thick scrub-filled, wide gully of open terrain. You can see this anomaly on the USGS topo map if you analyze it closely. Bash your way across the gully to reach the TRUE North Ridge at about 7,250 feet. At about 7,400 feet, the ridge bends to the left/southeast. You must skirt some sections of thick aspens up here, as well as maneuver around the ever-present mountain mahogany trees. You will eventually reach the semi-open summit area and find a large ground boulder with a large cairn atop it. This is the high point of Smoky Mountain. The final ¼ mile of this ascent is fairly flat. I thought I’d never reach the top.

Same as for the northwest face/north ridge

If you climbed Peak 6821 earlier in the day as I did, you got a good look at the northwest face of the north ridge of Smoky Mountain. There is a prominent, open grassy slope that drops from the north ridge (shown on the USGS topo map, too) near Point 6661. It dumps you out on the City of Rocks Road near the road’s crossing of Circle Creek. If you can make your way down the north ridge to the 6,460-foot saddle on the south side of Point 6661, then contour around the west face of Point 6661 to reach the top of that grassy slope, you will have yourself an easy descent to the City of Rocks Road. That’s the objective.

From the summit, descend northwest then north down the north ridge, staying to the right/east as necessary in semi-open terrain to avoid mountain mahogany on the ridge crest. The ridge becomes rounded and ill-defined fairly soon, but in open areas (which you WILL find) you can see the beautiful, large, gentle, open saddle below you to the north-northeast. At some points, you get a visual of the dropoff down the northwest face to the valley floor and the City of Rocks Road. It might just give you a nosebleed.

At about 6,600 feet, the ridge splits and has two similar sub-ridges (with a scrub-clogged gully in between). The terrain is mostly forested here and you lose your visuals. Just keep bashing your way through the blowdown and veg either in a northerly direction (if on the right sub-ridge) or in a northeasterly direction (if on the left sub-ridge) to reach the [blessed] open saddle at 6,460 feet. This saddle sits at the head of a narrow, thickly forested gully that drops sharply northwest then west from the saddle to reach the desert scrub southeast of Camp Rock. Don’t even think about descending this gully. It looks treacherous up near the saddle and it gets much steeper and narrower farther down. It may have impassable cliff bands in it. Stick with the original plan.

From the open saddle, contour north into the thick forest on the west face of Point 6661. This terrain is much rougher than the USGS topo map makes it appear. The forest has massive boulders/blocks and hidden cliff bands in it, making this short traverse somewhat challenging. The side-hilling here is worse than I expected. Work your way through it and try to stay just above the 6,400-foot level. You will soon cross a shoulder at which point the contour turns right/northeast. Stop contouring and descend northwest from here in forest or semi-open terrain. I could not find the wide-open grassy slope that I saw from the top of Peak 6821. Work your way down through relatively easy grass/scrub slopes and reasonably easy forest to reach the end of the forest and the desert scrub near the City of Rocks Road. Use gaps and cattle trails to cross the open scrub to reach the City of Rocks Road just above, and southwest of, the bridge crossing of Circle Creek. Hike west up the road to return to your parked vehicle at Camp Rock.