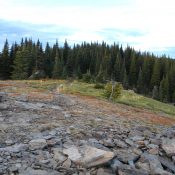 South Chilco Mountain is a locally significant mountain. It is the highest peak on the western front of the Coeur d’Alene Mountains, a sub-range of the Bitterroots in Northern Idaho. It is 5,661 feet in elevation and has a respectable 1,526 feet of prominence, both of which are ranked #3 in Kootenai County. The abrupt rise of these mountains is approximately 3,500 feet, which is not large, but with the heavy coat of evergreen forests and numerous large and small lakes nestled against the lower elevations, it’s a very scenic place.

The mountain stands out particularly from Hayden Lake (north of Coeur d’Alene) which lies nearly 3,300 feet below. The lakes largest tributary (Hayden Creek) flows off the southwest aspect of the mountain feeding the lake with cold, clear water through dark, inland rain forests of western red cedar and Hemlock. The upper elevations support open stands of subalpine fir and beargrass glades broken up by large talus slopes. These large rocks are billion-year-old sedimentary ripple rocks raised up from an ancient sea bed. USGS Spades Mountain 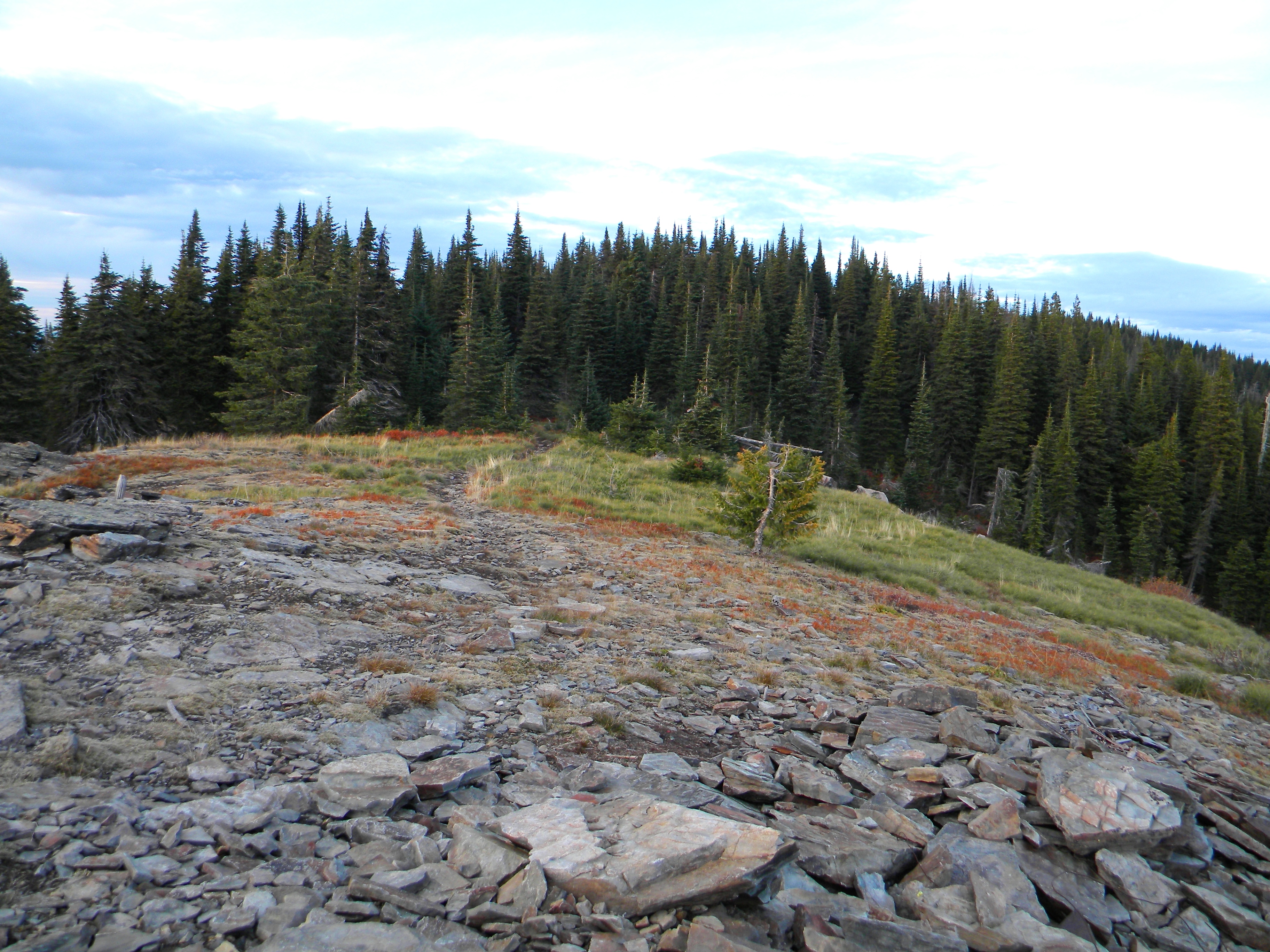 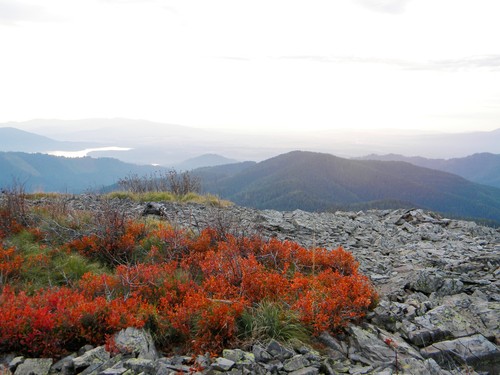 The summit views are the highlight of South Chilco Mountain. Mike Hays Photo

The mountain looks out over the Rathdrum Prairie into Washington State beyond the city of Spokane. Several lakes including Coeur d’Alene, Hayden, Lower Twin and Hauser are visible to the south and west. Across the south end of the Purcell Trench lies the southern terminus of the extensive Selkirk Mountains along the Idaho/Washington border. To the east, the apparently endless waves of the Coeur d’Alene Mountains (broken up by the highly dendritic fingers of the Coeur d’Alene River) extend to the Northern Bitterroots and on into Montana. To the northeast, the view across the broad Clark Fork Valley is highlighted by Snowshoe Peak and other summits of the Cabinet Mountains. To the southeast, below the South Fork Coeur d’Alene basin, the St. Joe Mountains rise in a similar, but generally slightly higher manner than their northern neighbors.

A visit to this high summit is always rewarding but, unfortunately, progress is limiting the experience. The Idaho Panhandle National Forest has become an urban forest due to the swelling of the Coeur d’Alene/Spokane metro area, which now collectively exceeds a half-million people. Though the development is miles away, a person standing on the summit can easily hear vehicles and trains from the valley below. But it is still a beautiful place that allows people to escape the hustle and bustle to enjoy one of the premier viewpoints in Northern Idaho.

There are several approaches to this mountain from Highway 95 north of Coeur d’Alene, Idaho. The southern access is covered below and the northern access is found on the North Chilco Mountain page.

From the north end of Hayden, go north slightly less than three miles on US-95 to the intersection with ID-57. A new traffic light and intersection reconstruction occurred here in 2009. Continue straight on US-95 for just over two miles to East Ohio Match Road. Take a right on this road and continue for 7.5 miles to where the Ohio Match meets the Hayden Creek Road. The Ohio Match starts off paved but soon turns to gravel. It is in pretty good shape, but there are a lot of corners before reaching Hayden Creek. This is a high use road so beware of oncoming traffic. Take a left on Hayden Creek Road (FSR-473) and continue for approximately 7.5 miles to FSR-406. Turn left on FSR-406 and continue for almost a mile. There will be a trail sign and a couple wide spots for a few vehicles to park. This is the trailhead.

This drive up the bottom of the Hayden Creek basin is quite scenic in deep dark hemlock and cedar forests. About five miles up FSR-473, the road starts to climb in elevation giving a few views of the heavily-forested basin to the west. Then a ridge top is met and the road turns left and meets FSR-406 to the left almost immediately. To return, just follow the same route out or continue west beyond the trailhead on FSR-406 to FSR-1530. FSR-1530 drops down to meet FSR-473 in the drainage bottom about 3.5 miles up from the Ohio Match/FSR-473 junction. It is narrower with more curves, but being higher up, probably gives better views.

The trail itself is in good condition, though it is being worked on extensively. The old trail more or less went straight up the mountain to the broad ridge of the summit area. This steep path encouraged erosion and general degradation. The trail is being reconstructed into a series of wide switchbacks giving a more pleasant grade. The trailhead marker says it’s a two mile hike to the mountain, but it is not clear if this distance applies to the old path or has been updated to the newer route. It is evident that the trail is heavily used. 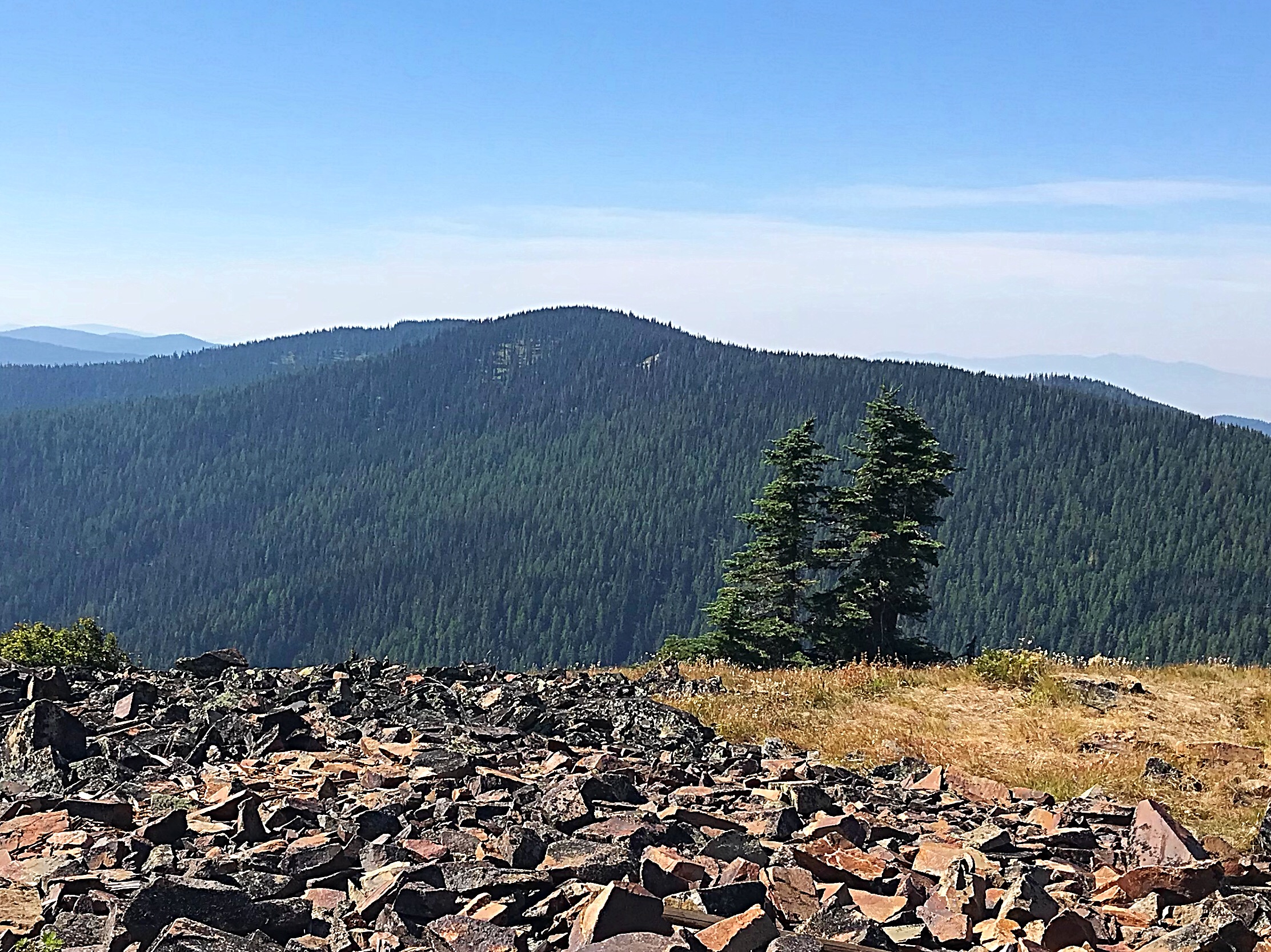