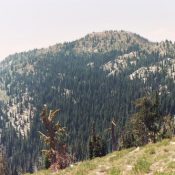 This peak is not in the book. I have updated Mike’s narrative with bracketed text [*] additions to cover recent developments.  Update July 2022

Southwest Butte is the high point of a small group of mountains between the Salmon River Canyon and the high mountains of the Gospel-Hump Wilderness to the east. The butte is the high point across approximately 40 miles between the Gospels and the Seven Devils. The area is a long ridge system that divides the Salmon River from its large tributaries of Allison Creek and Slate Creek. Only a few mountains along the ridge have enough prominence to be considered mountains. USGS John Day Mountain 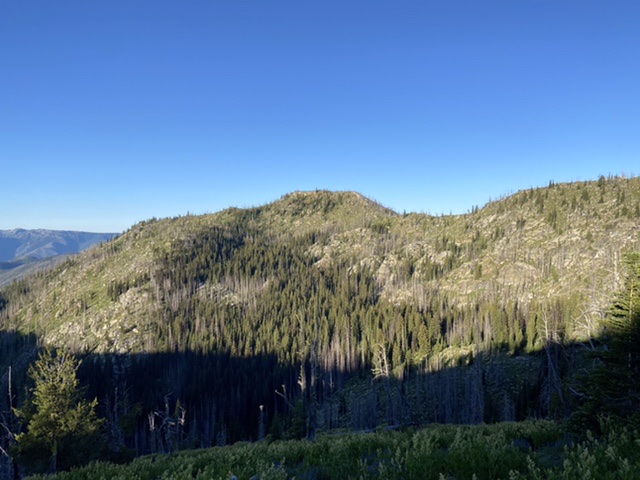 The area is interesting due to the extreme abrupt lift from the bottom of the Salmon Canyon. The greatest elevation change is over 6,300 feet, with almost the entire area being well over a mile above the canyon bottom. To the east, the summit pyramid rises 1,400 feet over the headwaters of the West Fork of Allison Creek and over 6,000 feet above the confluence of that stream and the main fork of Allison Creek, approximately 4 miles away. The long Southwest Ridge forms the divide between the main Salmon Canyon upstream from Riggins and the lower Salmon River downstream from the confluence of the Little Salmon River.

The high vertical lift gives the Southwest Butte and its neighbors varied ecological gradation ranging from hot canyon grasslands, through open pine savannas to moist mixed-conifer forests followed by cool lodgepole pine forest before the high parklands of subalpine fir and whitebark pine. High-elevation sagebrush areas are also present with beautiful early-season wildflowers. Such communities high in the mountains are unusual for the northern portion of Idaho. There are also some high, cool basins dominated by subalpine fir and spruce.

Geologically, the mountain is complex having basalt, limestone, quartz and granite components. Much of the area is formed by a granite batholith that cooked some of the base layers into various forms of quartz and schist. The limestone remains from the ancient Pacific shoreline. This shoreline was forced into the North American plate when the Wallowa Terrane pushed in from the west. Covering much of the lower to mid-elevations is more recent basalt from the Grand Ronde lava flows that flooded much of the inland northwest approximately 18 million years ago. An Idaho endemic plant that is limited to highly decomposed granitic soils is found on Southwest Butte, well separated from its more typical range further east.

A large forest fire in 2003 left the top of the Southwest Butte and much of the land to the north and east charred and barren. Regardless, it’s a nice, easily accessible destination. The views ranging from the hot Salmon Canyon below up to the jagged peaks of the Seven Devils provides a huge contrast in land forms and vegetation across 7,800 vertical feet. The view to the east up the main Salmon Canyon and to the south up the Little Salmon Canyon provides a rare intermingling of huge holes in the ground divided by high peaks. Patrick Butte to the south rises 7,000 feet up from the Salmon River. The mountains in this area are not terribly high so they often go unnoticed. However, their bases are much lower than most places in the west and provide tremendous overall relief. Southwest Butte is uniquely situated to take in much of this fabulous country.

Drive to Slate Creek, 19 miles north of Riggins, Idaho on US-95. Take the Slate Creek Road east from this point. This road is found on the north end of the developed area that includes the Slate Creek Ranger Station and a couple dozen private homes at the mouth of Slate Creek. Follow the road for 0.3 miles where the actual Slate Creek Road merges to the left. Stay on the pavement (to the right) and continue for 0.3 mile to the Nut Basin Road/FSR-441. Turn east on Nut Basin Road and climb out of the canyon. Continue for approximately 17 miles on Nut Basin Road to the Southwest Butte trailhead. This location is on a broad curve and there is room to park 2-3 vehicles.

Another route into the area from Riggins goes east on Salmon River Road for 9.5 miles to the mouth of Allison Creek. Turn left onto Allison Creek Road/FSR-221 and follow it for 16.2 miles to the trailhead. There are a couple of intersections to be aware of. About 3.0 miles after the road leaves the bottom of Allison Creek, turn left onto FSR-535. After nearly 4.0 miles, merge left (continue straight) onto FSR-441 and continue to the Southwest Butte trailhead. This will be about 0.1 mile before the turnoff to the Nut Basin high point. Also see Southwest Clearwater Mountains Access Points.

From the FST-118 trailhead, it is a little over 2.0 miles to the eastern slopes of Southwest Butte. [This trail has been modified into an ATV trail since Mike prepared this page. There is still a signed trailhead on the ridge top where the road makes a big sweeping curve. The trail from this trailhead connects with the ATV trail in the next saddle to the west in 0.25 miles. The ATV trail starts downhill/south of the upper trail.]

Continue along the gentle higher elevations before coming to a south aspect. Here, drop down to a flat meadow area at the north end of a large basin on the northeast flank of the mountain.

In the vicinity of the northeast basin a trail goes to the west [toward John Day Mountain]. Ignore this trail and go south through the basin. Small openings in a spruce/fir/lodgepole pine forest are found before the trail climbs up to the [spur on peak’s west face]. Once on top of this ridge, leave the trail and hike cross-country up the ridge to the top. This is only about a 200-foot climb on moderately-steep ground. 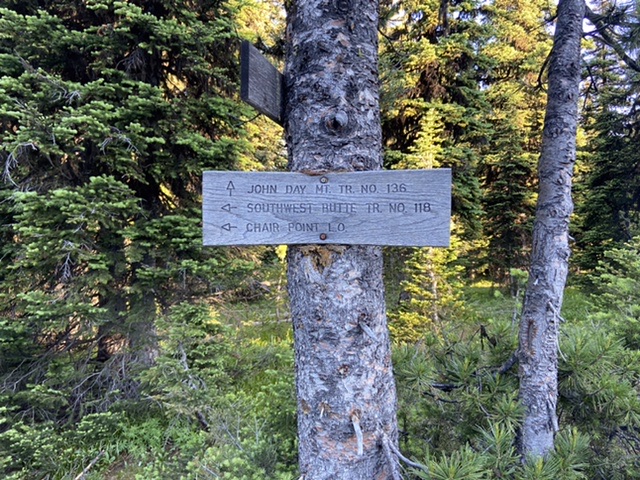 The junction with the trail to John Day Mountain.

[There are two high points separated by a couple of hundred feet. The northernmost point is the highest and there is a Richard Carey register in a red can.The slightly lower point has a benchmark,] 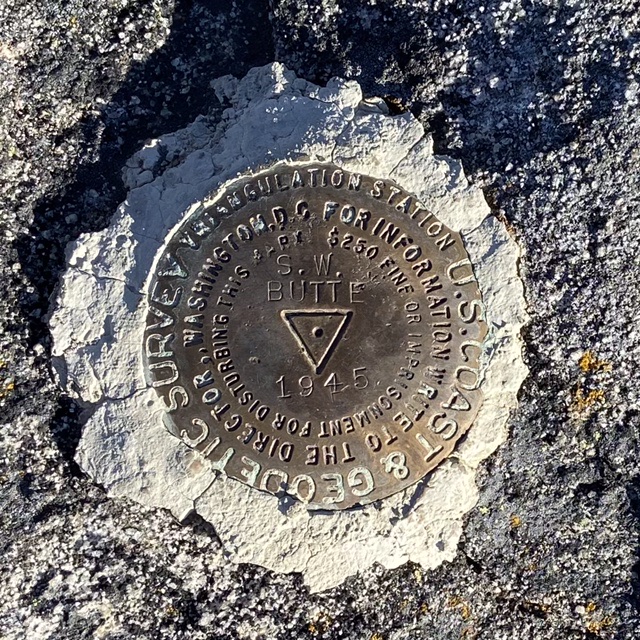 The benchmark on the lower summit. 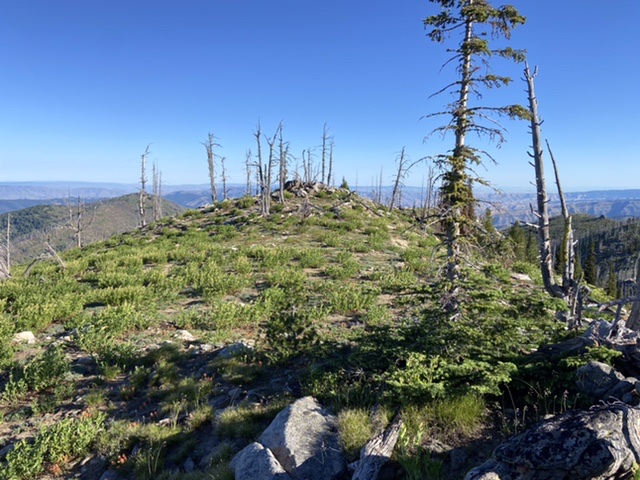 Return can be by the same route or continue on the main North Ridge from the summit and encircle the Northeast Basin, dropping back down to the trail at its north end. Then follow the trail back to the trailhead. 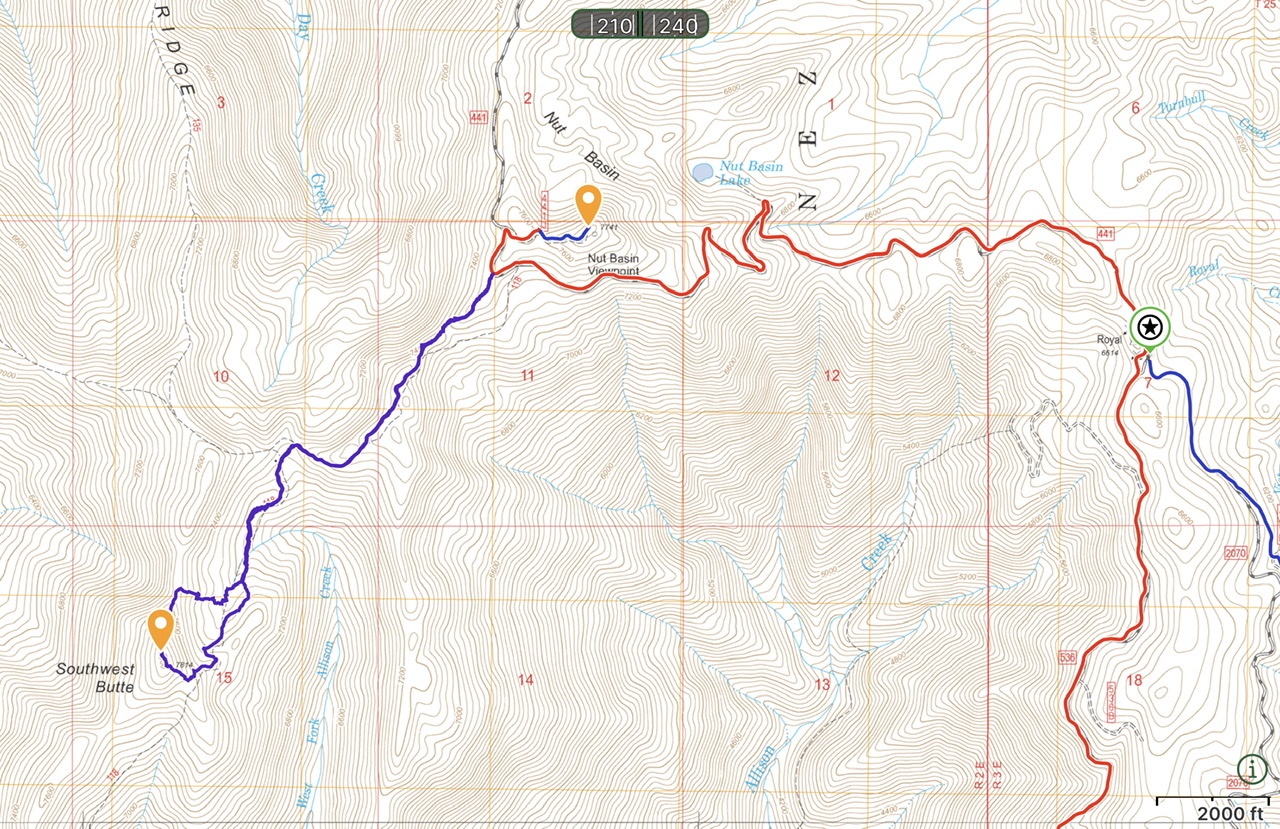 My GPS tracks for Southwest Butte and Nut Basin Lookout. My route was 4.4 miles with 1,305 feet of elevation gain round trip. 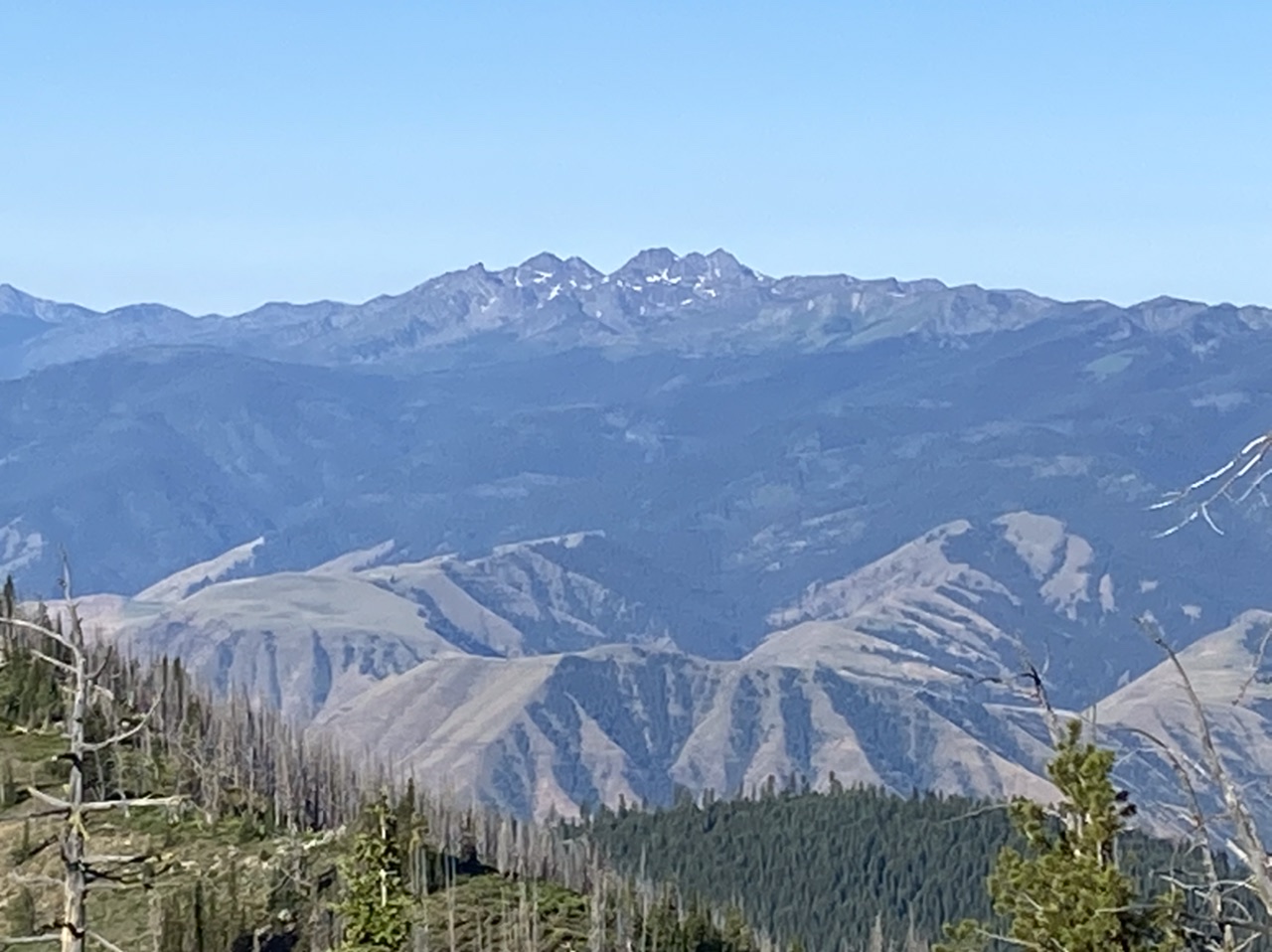 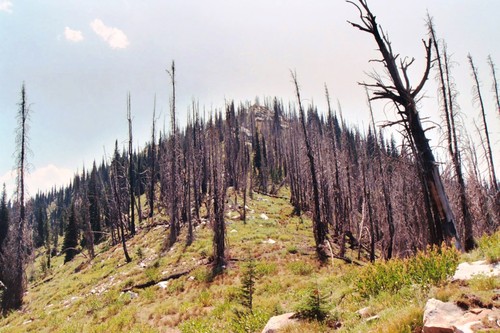