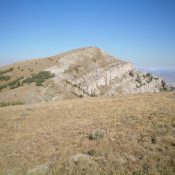 Climbing and access information for this peak is on Page 332 of the book. Published November 2020

Taylor Mountain is located on the Continental Divide and towers over Upper Red Rock Lake (MT) to its north. It is a massive mountain and is most easily reached via the CDT and Keg Spring Road to its east. Taylor Mountain has a gentle south side but a steep, exposed north side. Unlike what is shown on the National Forest map, Taylor Creek Road/FSR-037 is closed early on and is only a weak foot path higher up the valley. The road has been gated for decades and there are only remnants of it for a short distance after the gated closure point. USGS Upper Red Rock Lake 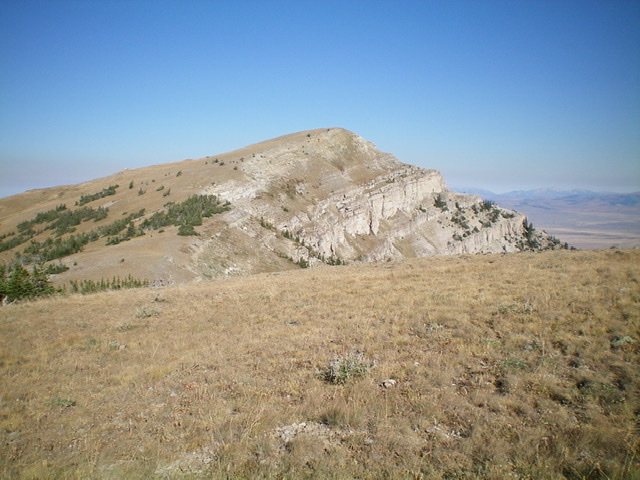 Taylor Mountain as viewed from the southeast on the Idaho side. Livingston Douglas Photo

From the junction of [signed] Yale-Kilgore Road and US-20 just north of Island Park, drive west on Yale-Kilgore Road for about 15 miles to reach a [signed] junction with FSR-035. Turn right/west onto FSR-035 and drive 0.8 miles to an unsigned road junction. Go right/north here onto FSR-037/Taylor Creek Road. Drive 1.1 miles north on FSR-037 to reach an unsigned road junction. Go straight here for 100 feet and park in a pullout just before the road closure gate (6,840 feet).

From the road closure gate, follow an old 2-track road north up a dry gully until it soon fades to a foot path then a cattle trail. The gully morphs into an open face of field grass and sagebrush. Continue north up mostly open terrain until the south spur gains definition. Follow the spur/ridge north through patches of forest and open meadows to find an old mining road higher up. Hike up the mining road until it ends just north of Point 8492. From here, scramble northwest then north up the mostly-open ridge on short scrub and through short patches of forest.

Higher up, the trees disappear and it is purely a grind northward to the Continental Divide. You reach the CDT before reaching the crest of the CD. Go left/west on the CDT for about a mile to reach the left/south side of a ridge saddle at 9,520 feet. Leave the CDT here and scramble a short distance right/north to reach the ridge saddle on the Continental Divide. From this saddle, you can make a short side trip (on a use trail) to climb Arrowhead Mountain (9,500 feet)—a Montana peak. It is a beautiful forested hump just north of the CD with a magnificent view of Upper Red Rock Lake to its northwest.

From the ridge saddle, follow the easy, open ridge crest west-northwest then northwest to the summit of Taylor Mountain. You must drop to a final saddle before completing the final push to the high point. The summit has an ID/MT boundary post and cairn as well as a survey benchmark in a ground boulder. The view of Upper Red Rock Lake (MT) is stunning. 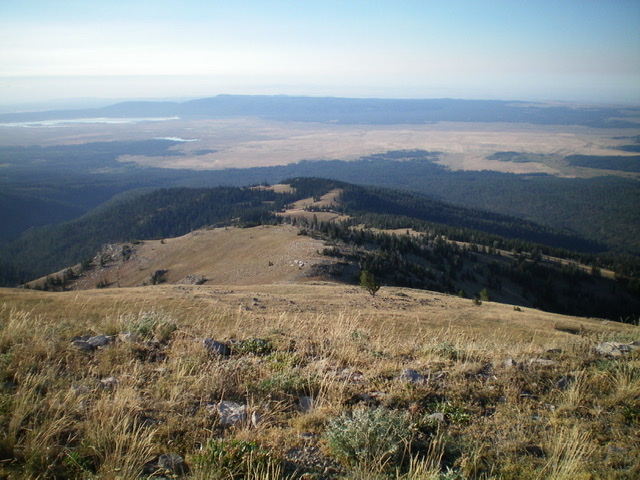 Looking down the south spur of the southeast ridge of Taylor Mountain. This is part of my ascent route. Livingston Douglas Photo

From the summit, descend southwest on magnificent open terrain (short scrub, grass, and scree) on a ridge/shoulder that leads down to an old mining area with mine remains and old mining roads crisscrossing the terrain. As you approach the mines, bend right/west to drop and cross a dry gully. The sagebrush is much thicker here and is a tedious bushwhack but is not long-lived. The dry gully is the low point in the traverse to Peak 8660 and concludes the first leg of today’s 2-peak journey. Peak 8660 is up next. 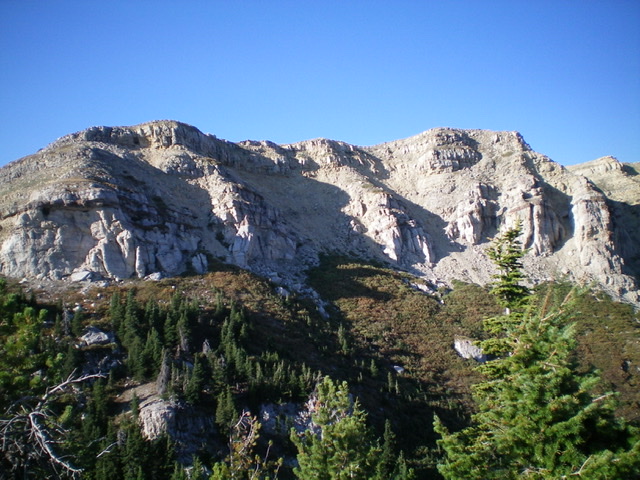 The sheer cliffs on the north side of the southeast ridge of Taylor Mountain. You can only see this from Montana. Livingston Douglas Photo 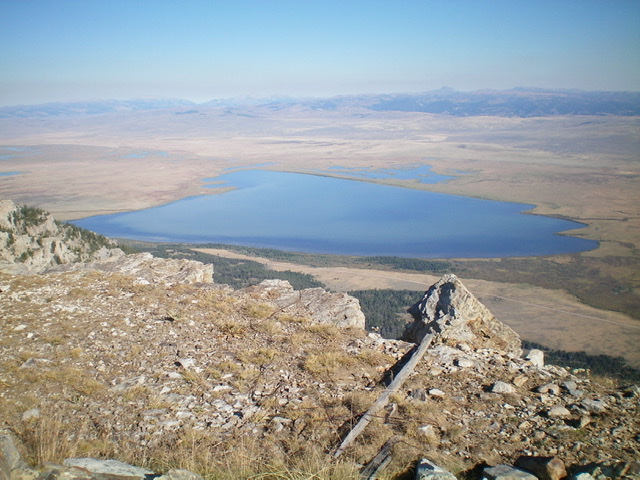 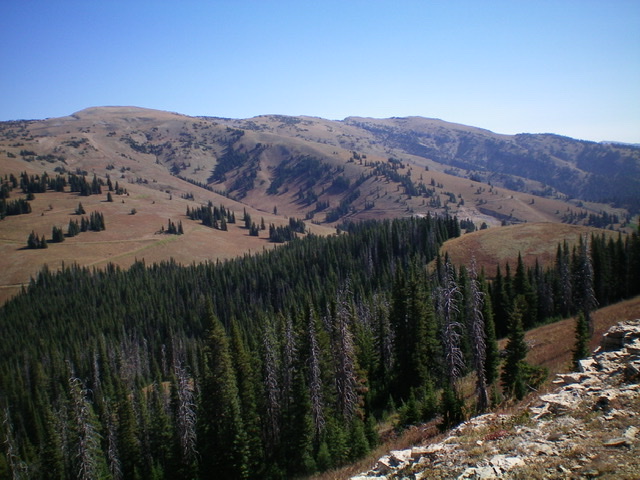 The long southwest ridge of Taylor Mountain is in the center of the photo, running from upper left to lower right. Livingston Douglas Photo 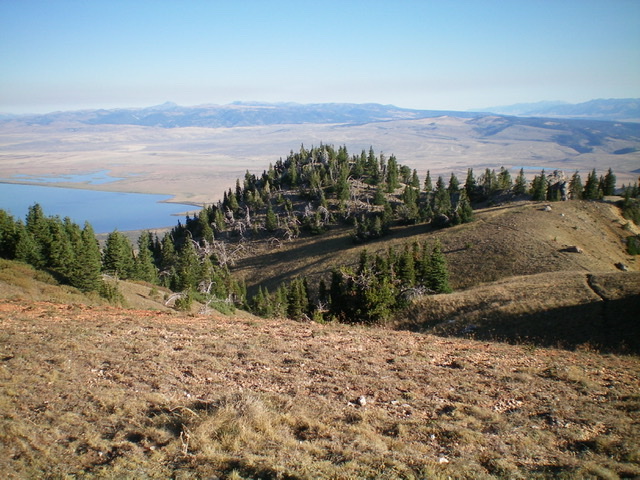 Beautiful Arrowhead Peak (MT), a very worthy side trip on your way to the summit of Taylor Mountain. Livingston Douglas Photo 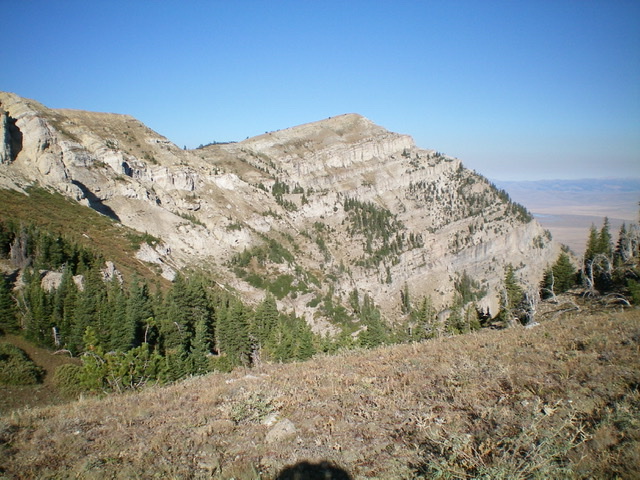 Taylor Mountain as viewed from the east-southeast on the Montana side. Livingston Douglas Photo