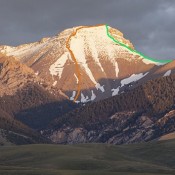 Climbing and access information for this peak is on Page 308 of the book. The book recommends climbing Rick Baugher’s East Ridge Route. After talking about the route, I think this route is more appropriately called the East Rib Route as the line does not follow a highly-defined ridge.

The Brow is the lowest of Idaho’s 11ers. It is the first summit north of Diamond Peak on the main Lemhi crest and its distinctive summit is a beauty. See Larry Prescott’s trip report (linked below) for additional photos. USGS Diamond Peak 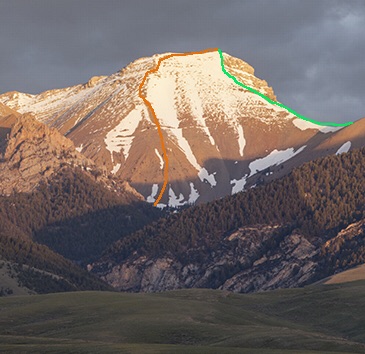 This photo shows Larry’s route up the East Rib and descent down to the ridge leading to Lame Jake Peak. Larry Prescott Photo

The drive to North Fork Pass Creek was straightforward [(A)(2.1) on Page 313]. The road was excellent by Lemhi standards. My Forester had no problem at all. The most important turnoff comes shortly after turning onto Pass Creek Road from the highway. Not long after turning, look for a road on the right that takes you up a small bench. Once on this road, follow it until you see the mouth of North Fork Pass Creek Canyon. It is quite a distance.

The hike up the canyon was beautiful. Springs emerged from several places to feed the creek. They often disappeared and reemerged alone the way. A nice bonus of such a hike is drinking straight from icy-cold mountain spring water. As I neared the end of the canyon, I veered left. I could not get a good look at the mountain because of the trees. From what I could see and from looking at the face from the Birch Creek Valley earlier in the morning, I had pretty much decided on a line up the East Face towards the south end. I also planned on coming down the East Face on the north end to make the ridge leading to Lame Jake Peak. 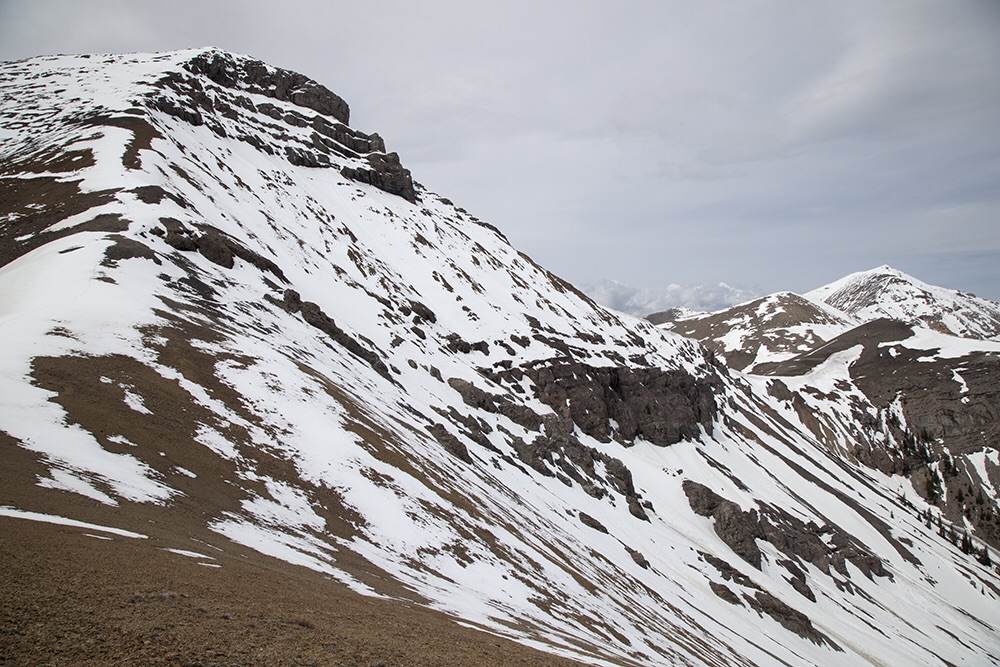 The North Face of the Brow. Larry Prescott Photo

Larry’s GPS track for his ascent of The Brow.