Climbing and access information for this peak is on Pages 191-196 of the book.

Warbonnet Peak, called the “Grand Teton” of Idaho by some, lives up to its reputation as one of Idaho’s most impressive peaks. There is no easy route to the top and all of the routes involve considerable exposure. Farther down the page you will find the South Face Route description from the book as well as many photos. Be sure to read Brandon Prince’s essay Warbonnet Peak and the Fine Art of “Not Giving Up.” USGS Warbonnet Peak 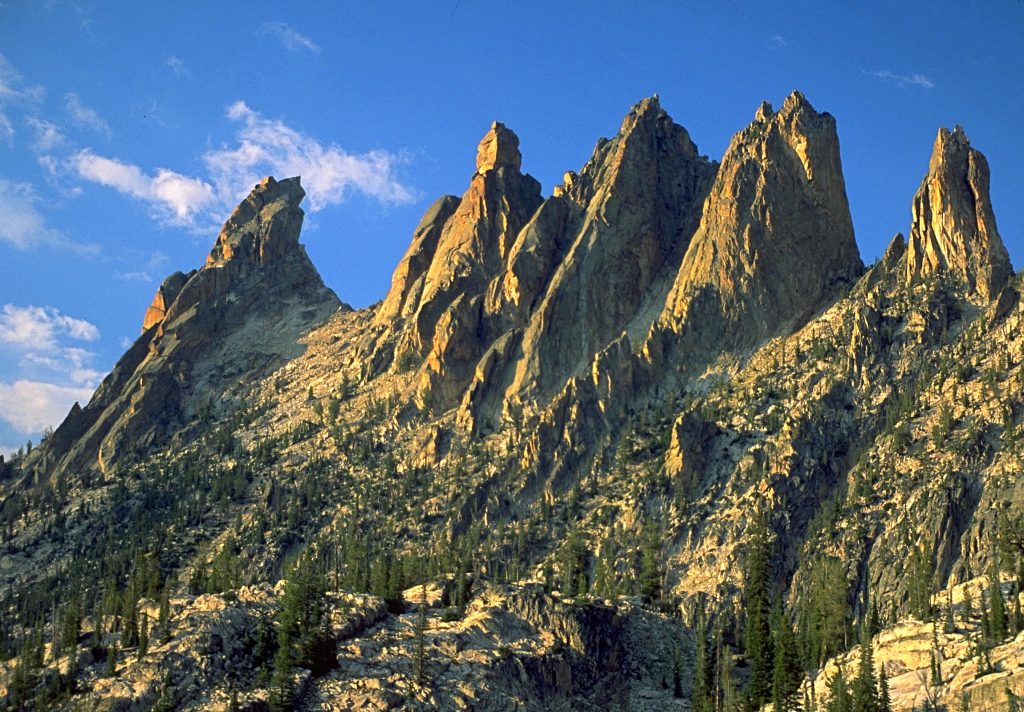 Warbonnet Peak (left) and its Verita Ridge neighbors are hidden from view deep in the Sawtooth Range.

The route begins at Bead Lakes southwest of the summit. From the lakes, climb to the Warbonnet/Cirque Lake Peak saddle on the southeast side of the peak. From the saddle, the route follows a series of connecting chimneys. Begin by climbing up the face for 40 or 50 feet to a ledge system that runs diagonally left to the peak’s Southeast Corner. The access to this ledge system is somewhat flaky, but sound. The ledge system ends behind a large detached slab. Climb over or below this slab to the west side of the ridge.

From this point, there are three alternative chimney routes, all of which lead to a shelf below the “staircase”—a talus-filled crack that leads up to the “friction highway.” The far left chimney, which is rated at 5.4, involves considerable exposure. The center chimney, also rated at 5.4, contains a chockstone and is shaped like an hourglass (one climber—despite having only a 31-inch waist—became wedged into the narrow section of the chimney). The far right chimney, the most difficult of the three, is rated 5.6. This chimney is directly above the detached slab and contains a chockstone that should be avoided.

Exiting this chimney requires stemming up under the crack’s roof and then doing a twisting pull-up (mantel) on a thin handhold. From the top of the chimney, climb up the “staircase” to the “friction highway” leading west on a ledge that connects with the notch at the base of the summit block. Follow the West Face Route to the top from this point. First ascent: L. Stur, B. Ring, N. Bennet, and S. Franke in 1957. 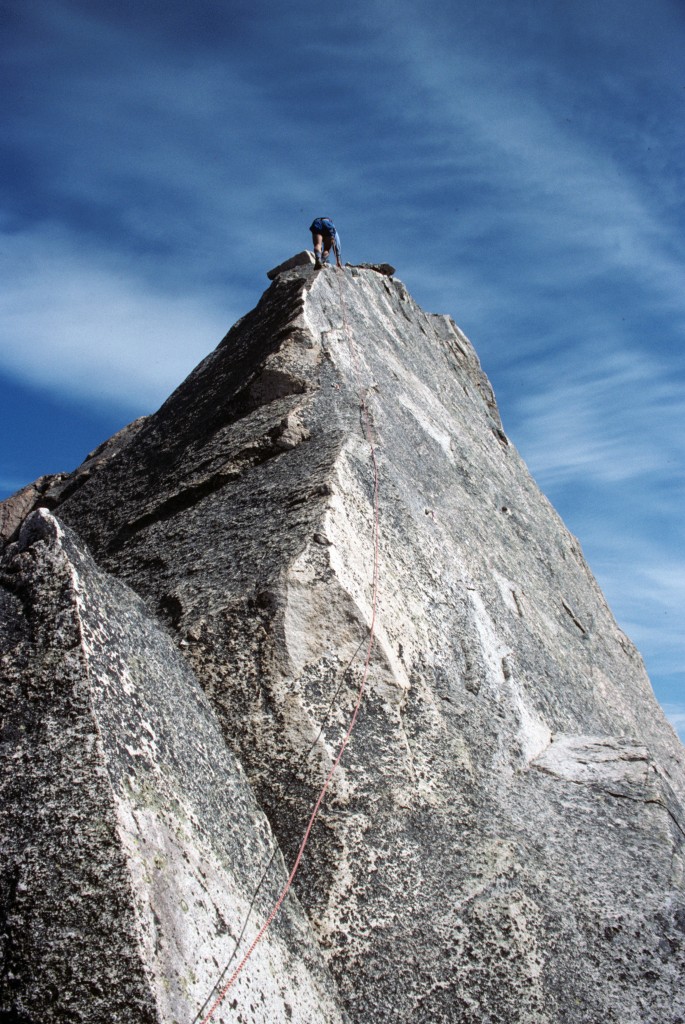 The summit of Warbonnet Peak. 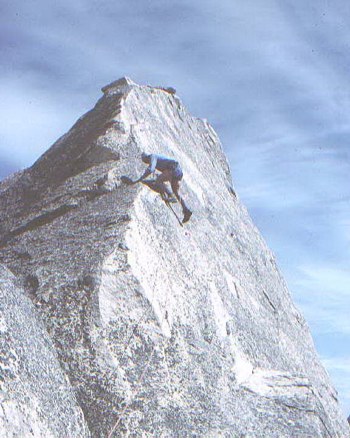 Kirk Bachman leading the last pitch on the summit block. 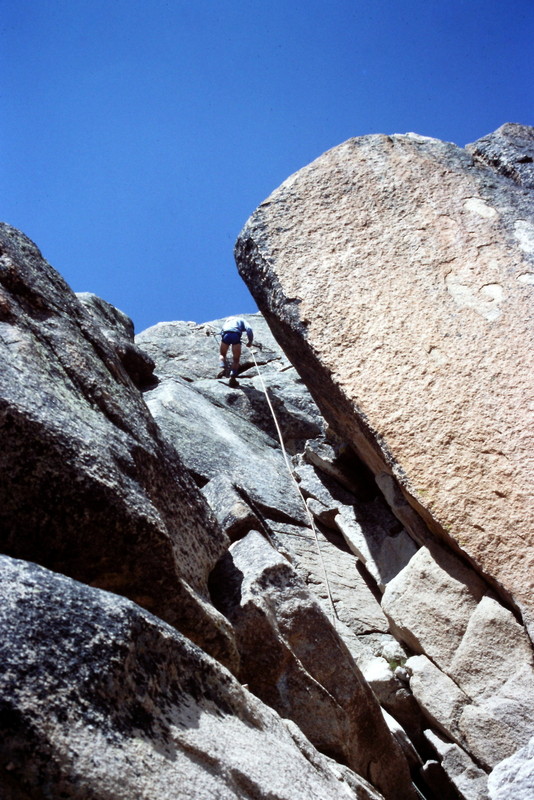 Rappelling down the South Face. 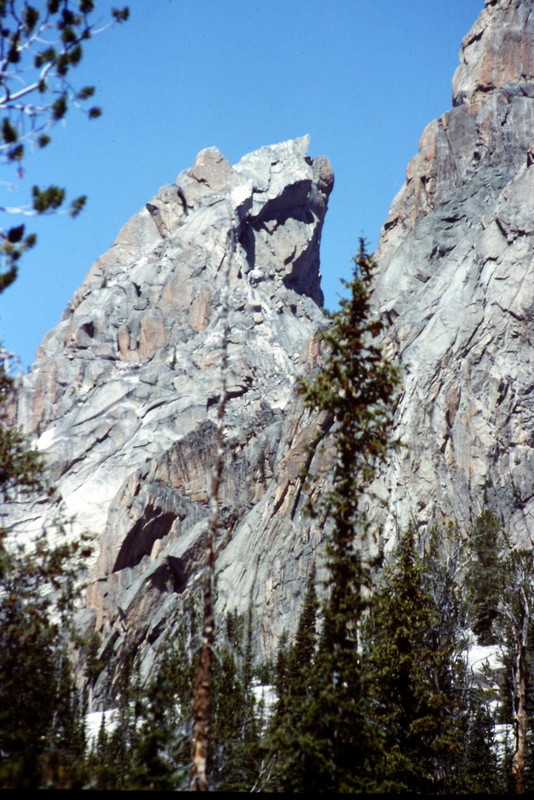 The South Face of Warbonnet Peak as viewed from Bead Lake. 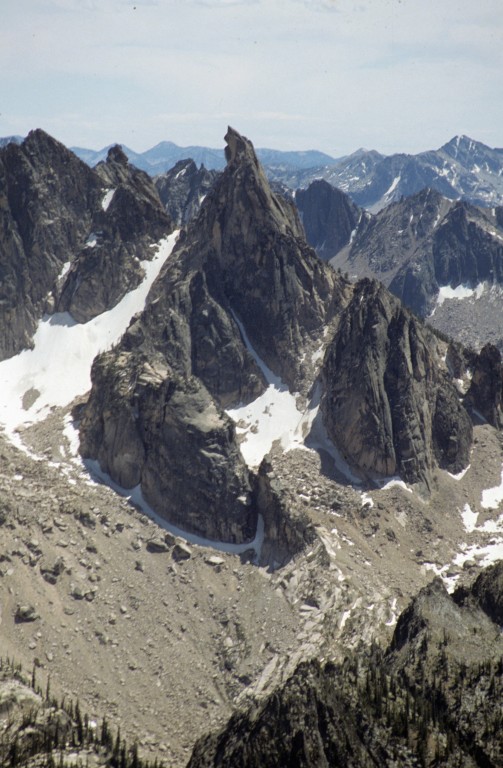 Warbonnet Peak as viewed from Peak 10330. 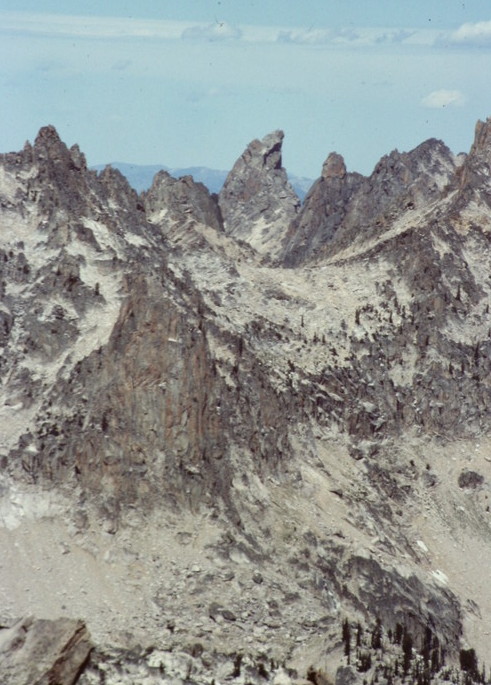 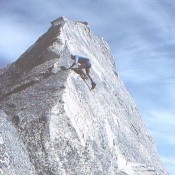 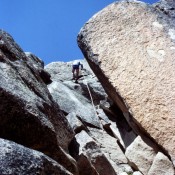 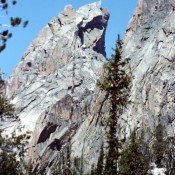 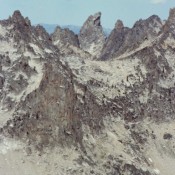 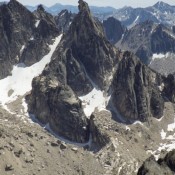