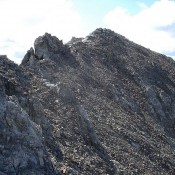 Climbing and access information for this peak is on Page 223 of the book.

WCP-8 is one of ten numbered peaks, denoted as “WCP-#” in the White Cloud Mountains. WCPs 1-10 are part of the Northern White Cloud Peak Group (on Page 220). All ten are spectacular peaks! WCP-8 is a broken pile of rubble. It is located south of O’Caulkens Lake and sits between WCP-7 and D.O. Lee Peak. WCP-8 is seldom climbed. The book provides route information for the peak’s south ridge. Find Livingston Douglas’ route up the north ridge below. USGS Washington Peak 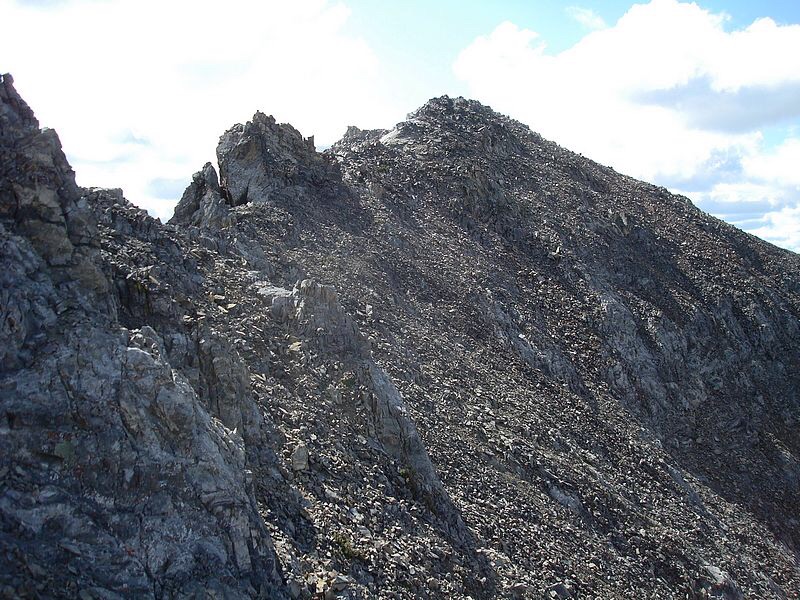 I climbed WCP-8 along with WCP-7 and White Cloud Pyramid/Peak 10182. From the ridge saddle south of WCP-7, scramble south along the ridge, up and over Point 10244 (Class 2 so far). At this point, the ridge becomes choppier, but it is still an easy Class 3 scramble. Goat trails will help you work your way along the ridge crest and keep you to the climber’s right of a few rocky ridge outcrops.

The final section of the north ridge is Class 3. The summit of WCP-8 is the high point (a slanted rock fin, actually) that marks where the ridge turns left/east. The exposure on the east side of the ridge is consistently breathtaking. Avoid it by staying on, or just west of, the ridge crest. Thankfully, the ridge itself is NOT a knife edge. To descend, return the way you came. If you can spare an extra hour, climb the beautifully-pyramidal Peak 10182 (Iron Basin Peak) just to the west of Point 10244 on your way back to WCP-7.