[Editor’s note: This page is adopted from Larry Prescott‘s trip report. Larry’s August 27, 2016, solo climb of 6 peaks will go down in Lemhi Range history as a ground-breaking effort. Larry passed away in October 2016.] 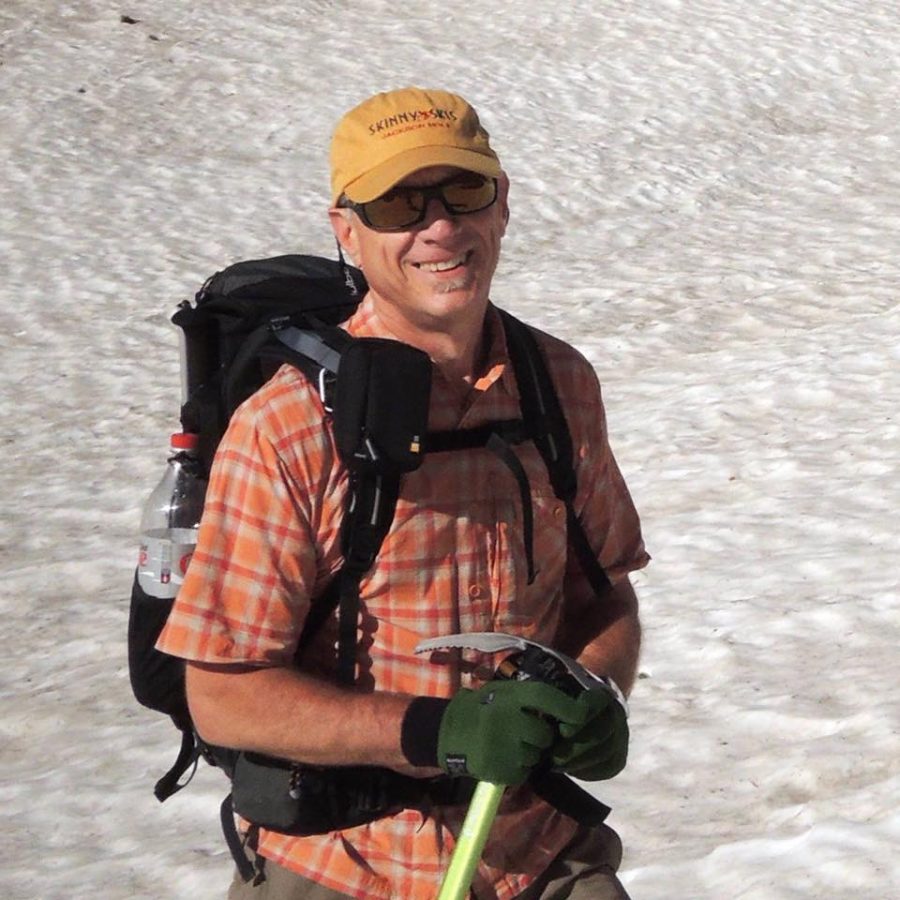 Drove to Mud Springs Friday evening and arrived just before dusk. The hazy conditions did not bode well for photography so I bedded down for the night. Slept under the stars. Watched the sky darken and the pin pricks of light appear. Mars and Saturn shone brightly in the southwestern sky long before stars and the Milky Way lit up the dark night. The faint white noise of crickets hummed in the desert silence.

Woke up at 4:30AM and thought once about beginning the hike. Just once. Fell back asleep and woke at 6:30AM. Boots on the ground at 6:50AM. The goal was to make Little Sister and then head for the main crest. Next continue north as far as Peak 10681. From there, I would head west along the ridge to Foss Mountain. Drop off Foss Mountain and hike back to Mud Springs.

From Mud Springs, I hiked up the gentle ridge shown below. The goal was to thread the space between 2 sets of cliffs near the top. Once past this point, a rocky ridge leads to the lower slopes of Little Sister. At the end of the ridge, I came across what looked like a rusty gold pan. Decided to hang it in a tree marking the route up Little Sister. 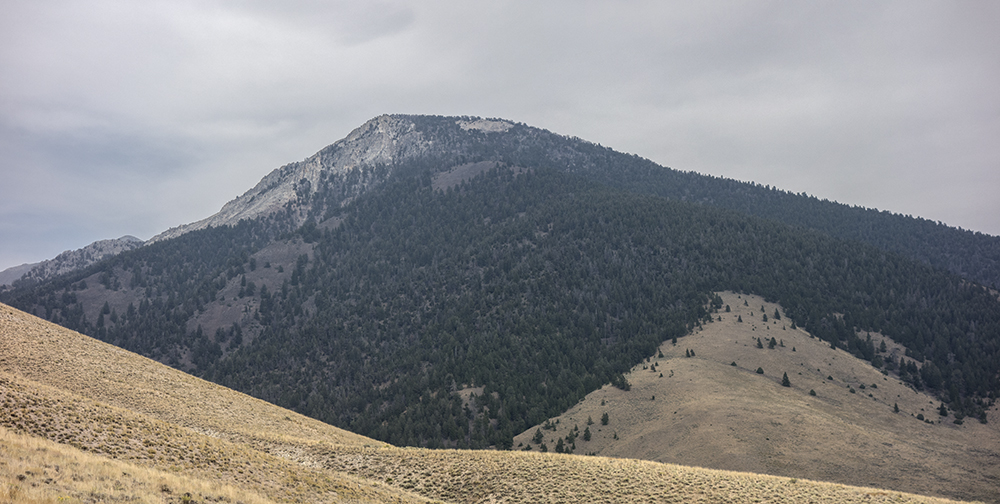 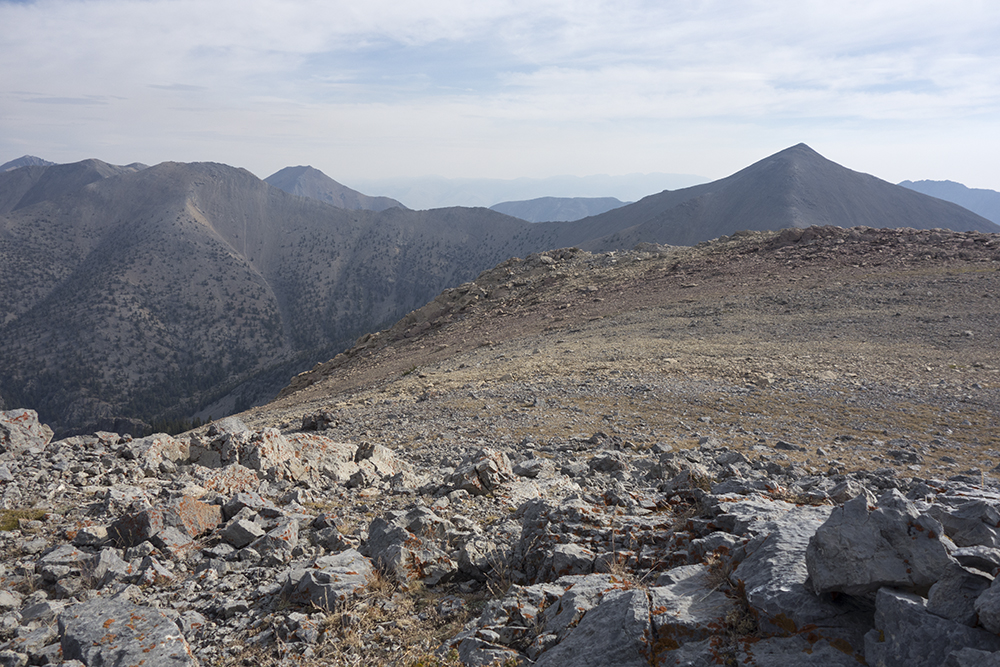 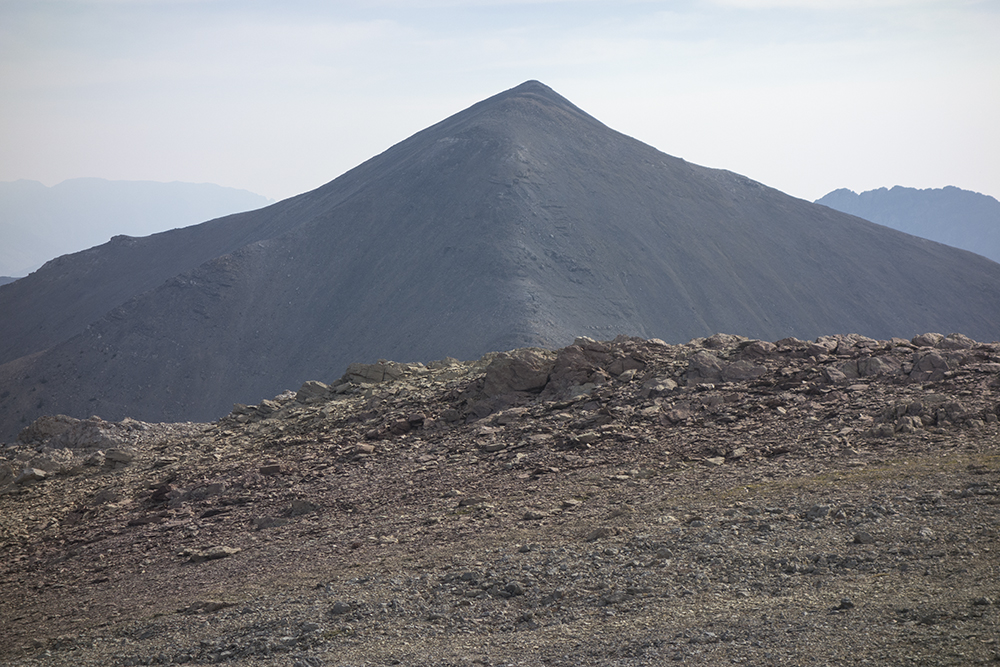 The Lemhi Crest. The goal was to make the pointed peak on the left and then head west. Larry Prescott Photo

Dropping off Little Sister, I spooked 5-6 mountain goats. They fled up the rocky slope, making a galloping ruckus in the shale. 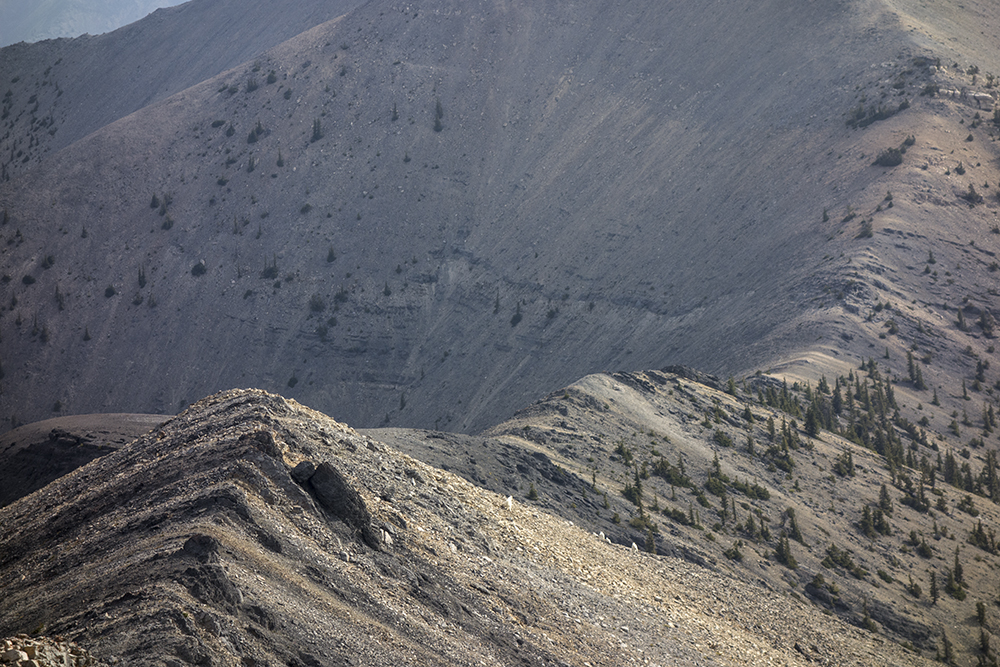 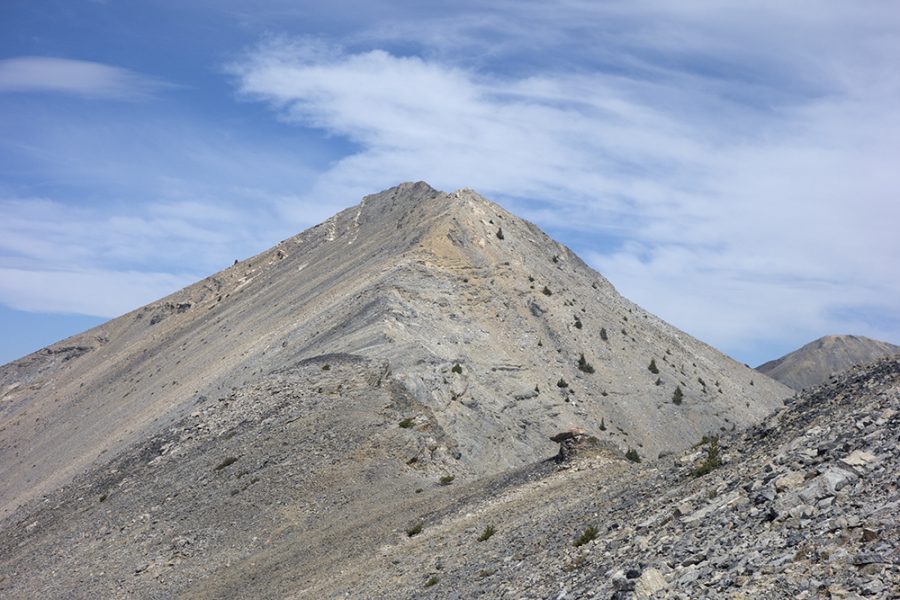 Heading north off Big Sister, Peak 10737 was next. The idea of calling it Little Brother just seemed fitting. For me, having a moniker to remember a peak is just easier to remember and talk about than a number. Having Big Sister stand between both Little Sister and Little Brother was in keeping with the family theme already in place. Those who know [my son] Ben might agree. On the ridge, I passed this interesting rock. A large slab of limestone sits balanced on an outcropping. How in the world? 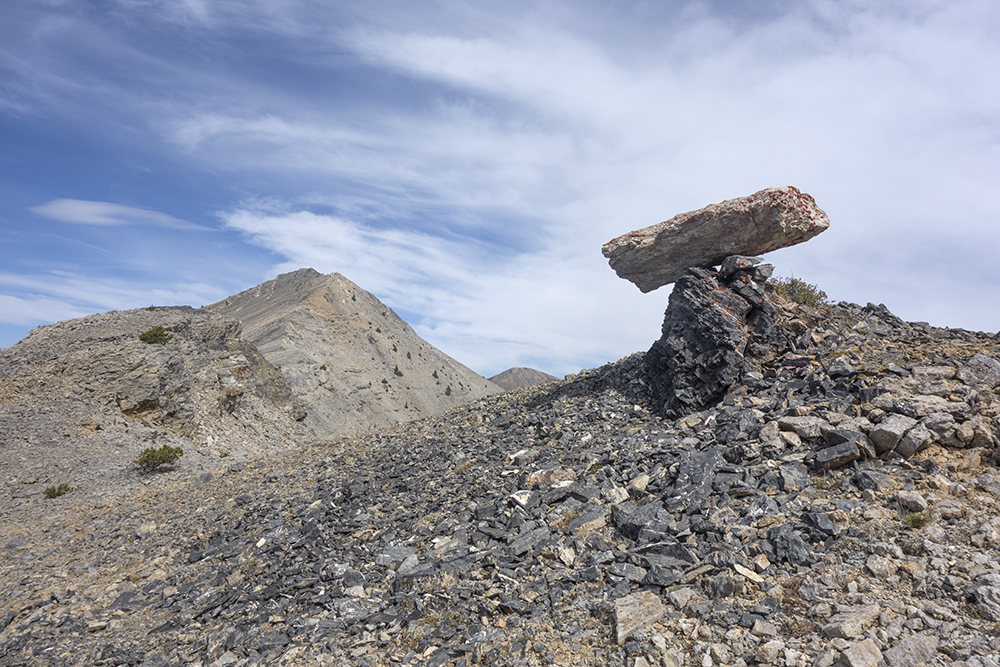 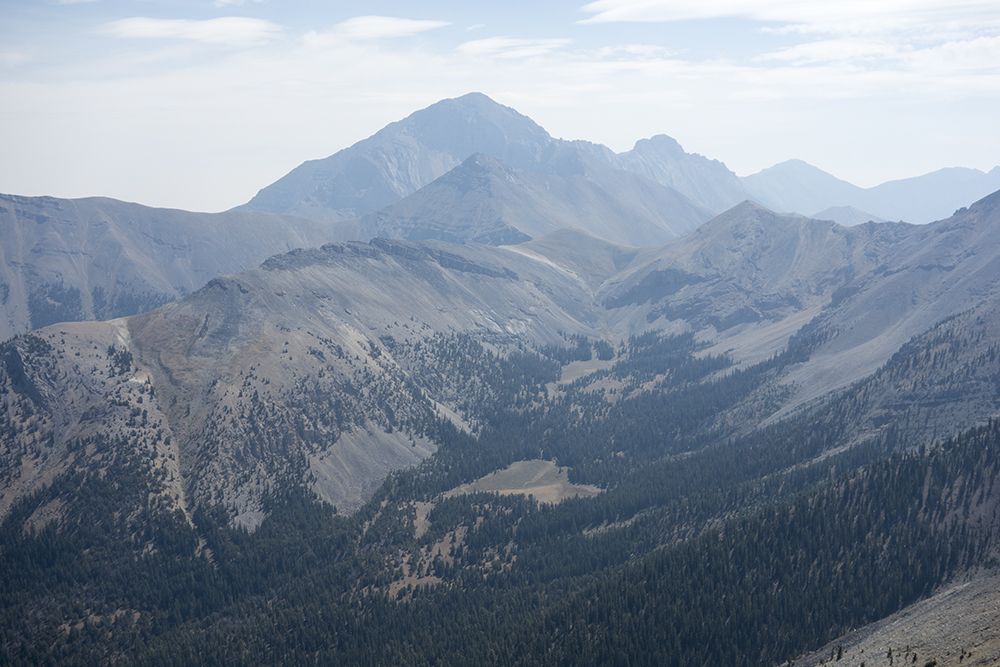 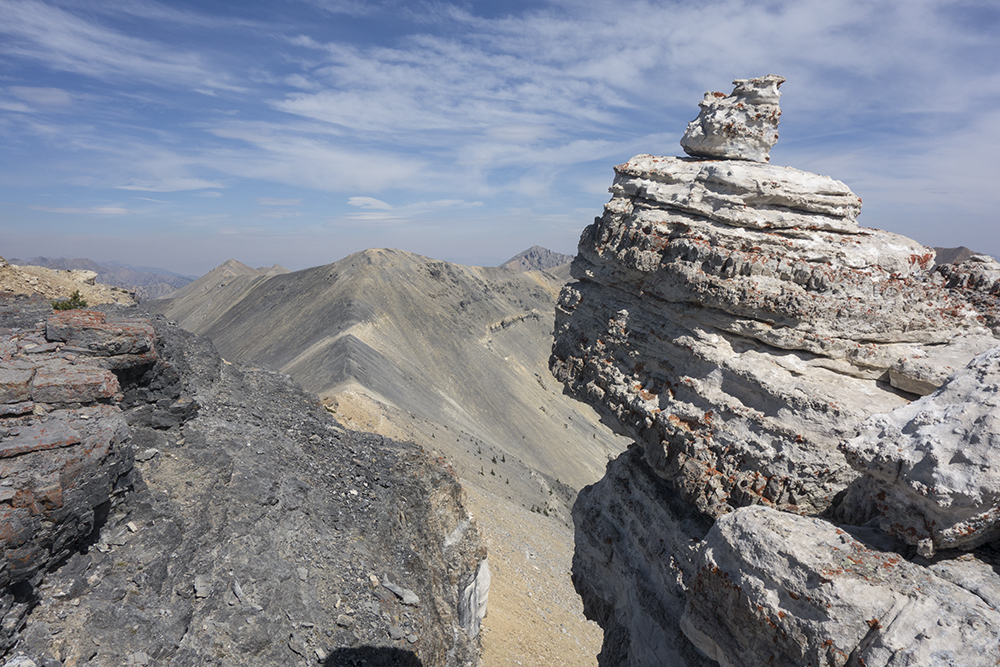 The next summit would be Peak 10751. I was in the name game mode and dubbed it Midway Mountain because of its location about midway between the 2 most notable Lemhi Peaks: Bell Mountain and Diamond Peak.

Two views of Rust Peak along the way.

The next destination was Peak 10681. It was the most impressive of the enchainment. Yet I was without another name. I took several images of this peak. 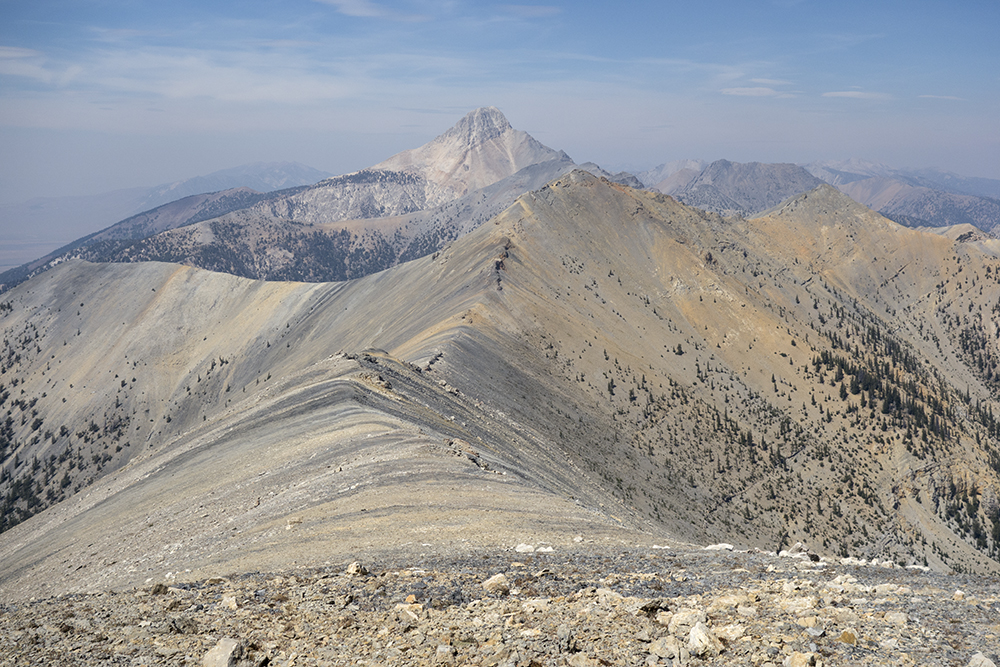 Heading east now, I made for the long West Ridge in the above photo. 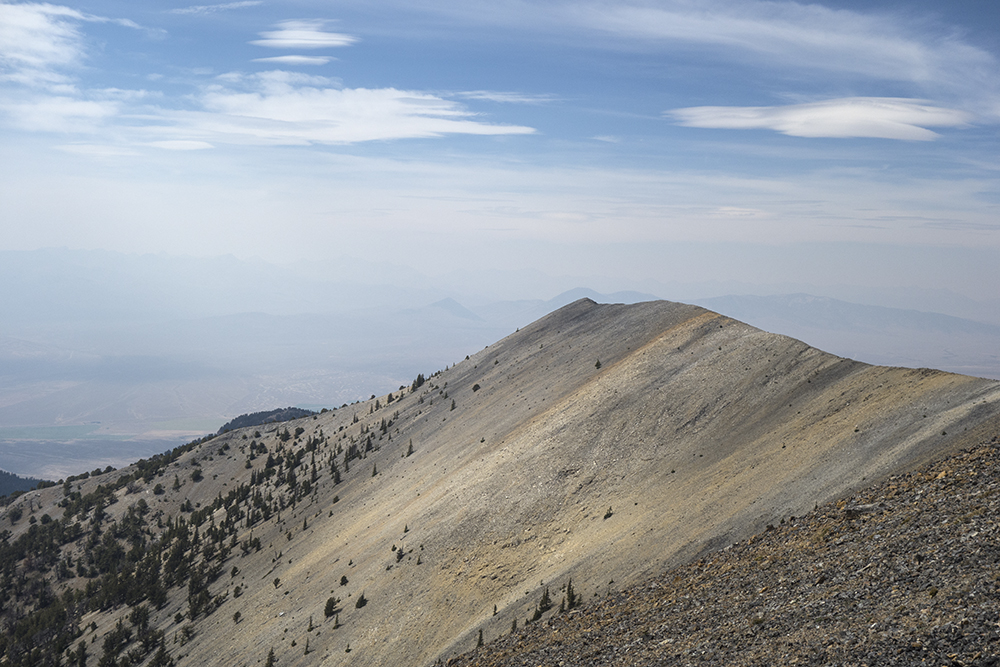 I also made an image of Bell Mountain with The Clapper in the foreground.

Looking back at the route, I made these images:

Little Sister (far right) and Midway Mountain (center left). The rise on the right does not have 300 feet of prominence. Larry Prescott Photo

The ridge line from Little Sister to Big Sister and Little Brother on the left. Larry Prescott Photo

The East Ridge from Peak 10861 leads directly to Foss Mountain. 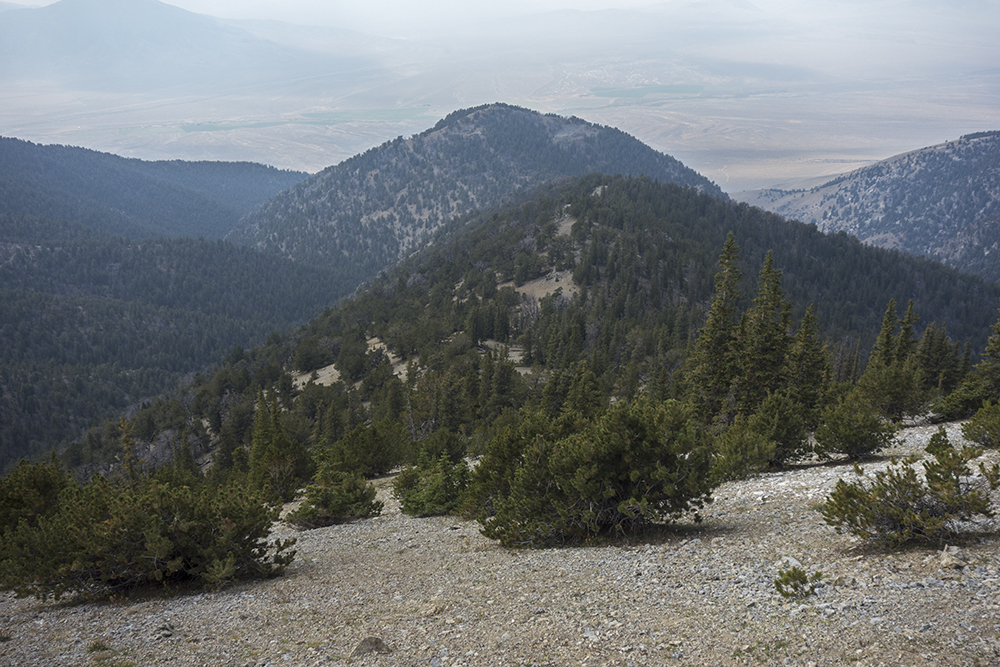 There is an actual road that one can drive to the top of the mountain. I came across it and followed it for a bit and then took a more direct line to the summit. Once I reached the summit of Foss Mountain, I needed to descend southwesterly and meet the road for an easy path to the mouth of the canyon. My map showed a possible route between 2 sets of formidable cliffs. I got really lucky with this descent. I found a scree run that was perfect for sliding down the mountain. Then, with some moderate bushwhacking, I found the road and the way out. 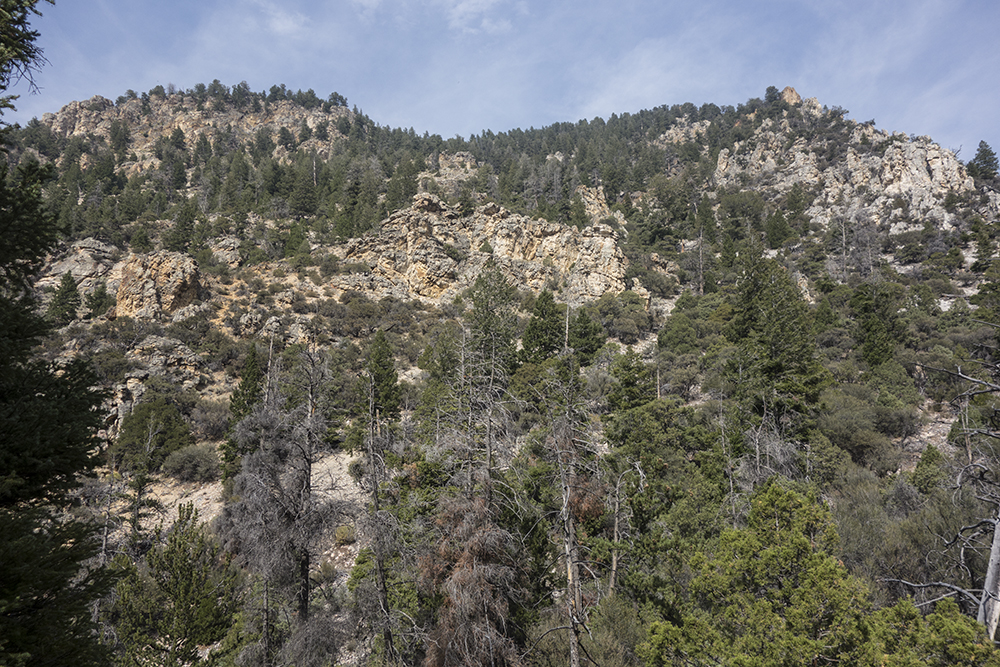 Foss Mountain. Looking back at the face I came down. Larry Prescott Photo

Coming out of the canyon, I was impressed by this very thick oasis. 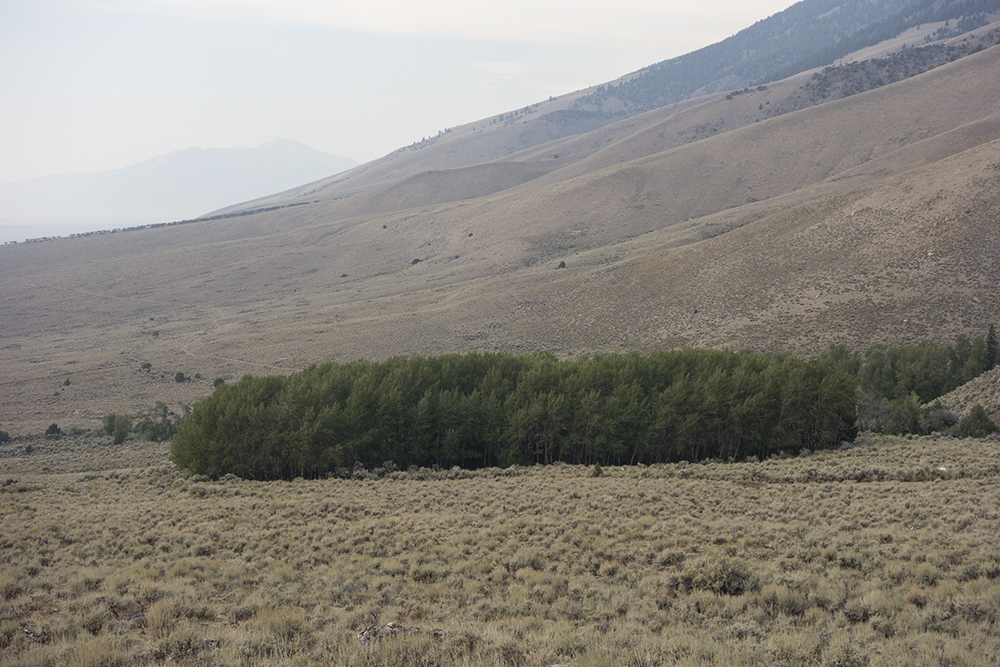 I began the long walk over the foothills and back to Mud Springs. Often following faint roads or stepping through sagebrush, I headed south. The hike was punctuated by several lush areas fed by small springs. Although barely a trickle at this time of year, the areas were surprisingly verdant. I did see 5 more mountain goats on the upper foothills and counted myself lucky to come across such magnificent animals. 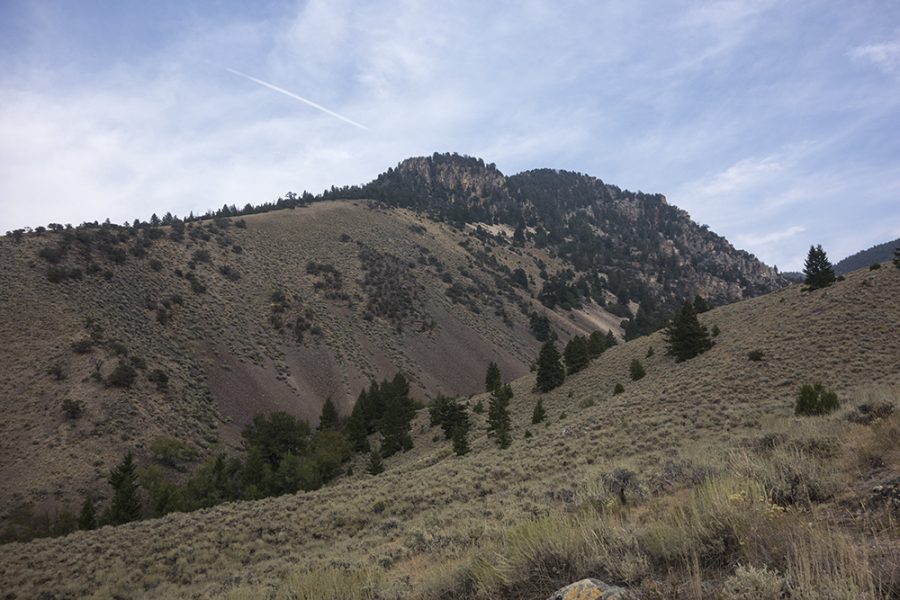 The rolling foothills pushed my total elevation gain to over 7,300 feet and the distance to 12.97 miles. Finally, I saw the green line of Cedar Run Creek in the far distance. I had rationed my 3 liters of water to just make it back to the truck and was motivated to reach the cooler and down a cold Mountain Dew Kickstart and a protein drink. 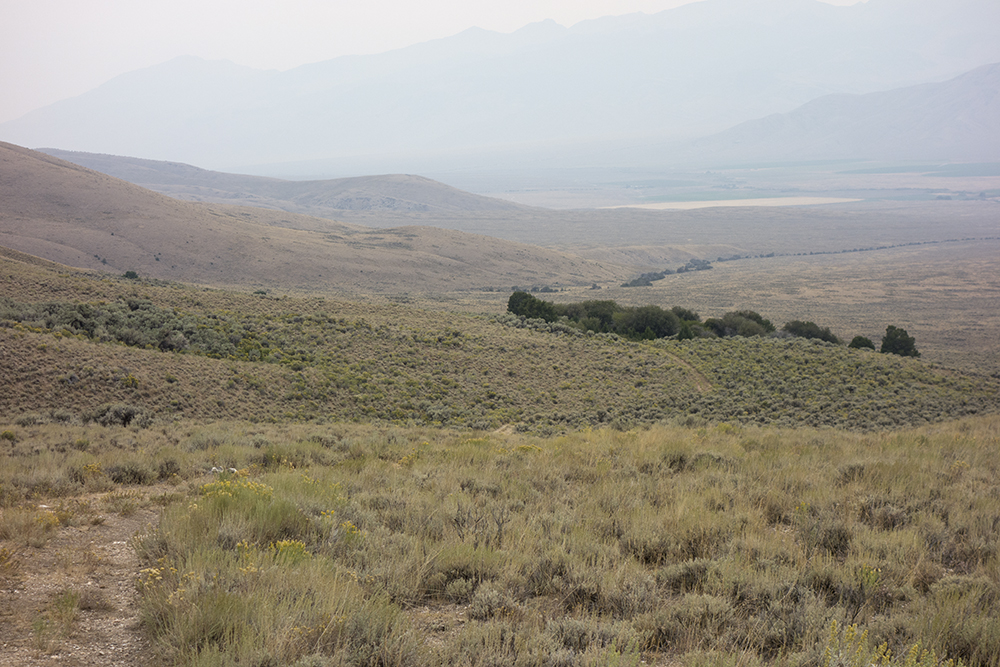 The line of cedars in the distance leading to Mud Springs. Larry Prescott Photo

Reaching the car at 5:40PM gave me plenty of time to make it to Mud Lake and order a Hawaiian pizza before the pizza joint closes at 8:00PM. Perfect timing and a perfect day.

For some reason, I was able to really see the light that evening. Artists know that as the sun sets and the colors change, the shadows cast by the sun will appear as the complement of whatever light the sun and atmosphere transmit. That evening, the sun set in the smoky haze from the numerous wildfires in the area. It glowed red. Hence the shadows of objects should be a vivid green. Most will never actually see this as their brain prevents this visual feast. However, that evening as I drove across the desert, I was ecstatic to see the shadows as green as can be. Wow! A final treat to a great day. 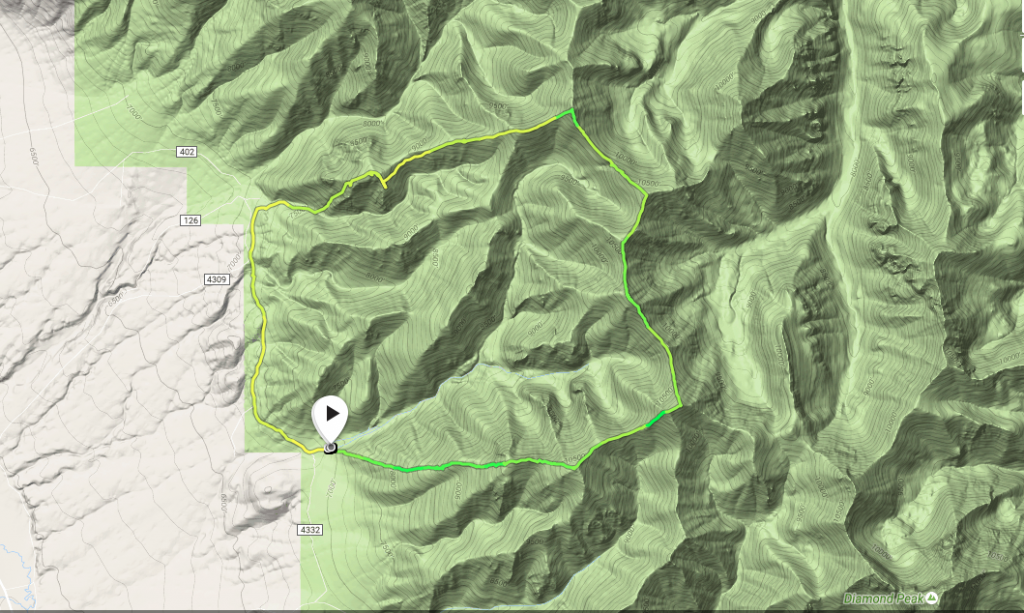