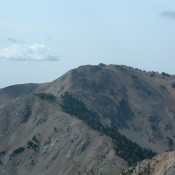 Climbing and access information for the north ridge of Baker Peak is on Page 212 of the book. Livingston Douglas has added two additional routes. Updated November 2022

Baker Peak is located southwest of Baker Lake. It is most often climbed as part of a ridge walk starting at Baker Lake that includes Backdrop Peak and Peak 10137. USGS Baker Peak 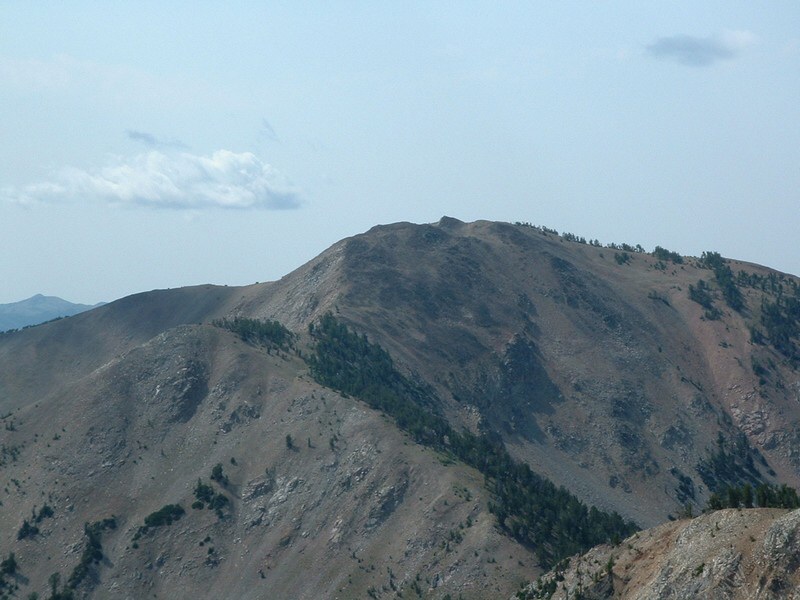 There is no FST-211 from Baker Lake to the right north of Baker Peak (as the book states). That trail is not shown on any maps, not even the USGS topo map. The USGS topo map fails to show the Osberg Ridgeline Trail from the Baker Lake trailhead parking area over to the upper reaches of Lost Shirt Gulch. The USGS topo map fails to show the upper section of the Castle Rock Trail/FST-140 which comes up Castle Creek from Slide Rock Canyon then heads northeast up to a ridgeline west of Point 8905 and then skirts around the north side of Point 8905 to reach a signed junction with FST-147. The Sawtooth National Forest map shows all of the aforementioned trails (or lack thereof) correctly.

From the trailhead parking area, hike south on the Osberg Ridgeline Trail/FST-147 as it descends to cross Baker Creek on a nice footbridge. Leave the trail soon after crossing the footbridge and scramble south up a steep slope with thick, tall veg early and a burnt pine forest (snags + downed charred timber). The underlying scree/gravel is very unstable. Contrary to the implications from the USGS topo map, this face is not a consistent, smooth grade. It is very steep in some areas and flatter in others. It has a mix of face terrain and a series of minor gullies. Interestingly, the gullies are generally easier to climb than the face terrain itself. All that being said, it goes pretty quickly and you find yourself atop a critical ridgeline just west of Point 8905.

This is the ridge that separates the Baker Creek drainage from Baker Peak. It is ironic that Baker Peak is located quite a distance from both Baker Creek and Baker Lake with [impressive] Backdrop Peak sitting directly above Baker Lake. The aforementioned ridge is your ticket to actually seeing and then climbing Baker Peak since there is no trail heading up Baker Creek to the ridgeline north of Baker Peak. You could, however, bushwhack up Baker Creek in open terrain to accomplish the same objective. 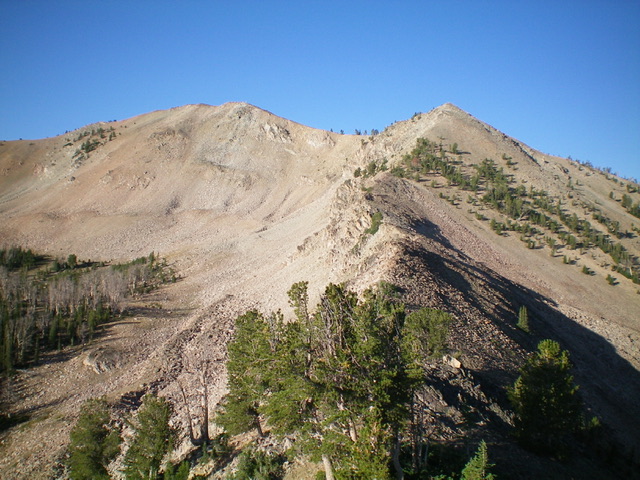 Looking up the rugged northeast ridge of Baker Peak (my ascent route). The summit is left of center. Livingston Douglas Photo

Once atop the ridge west of Peak 8905, follow a trail (this is the Castle Rock Trail) west until it turns left/south and begins a steep descent into the Castle Creek drainage. You have two options here. First, scramble southwest then south up onto the crest of the northeast ridge of Baker Peak. Second, leave the trail here and contour southwest into Slide Rock Canyon (which is the upper reaches of the Castle Rock drainage). I did the former for my ascent and the latter for my descent of Baker Peak.

Leave the trail the scramble southwest then south up steep scrub and gravel to quickly reach the crest of the northeast ridge of Baker Peak. The ridge heads west then southwest to reach a ridge point north of Baker Peak on the main north-south ridge crest of the Smoky Mountains. The terrain of the northeast ridge is mostly rocky with only a few ridge pines here and there. Midway up, there are a few Class 3 towers/outcrops to climb over. High up, it’s mostly a talus scramble to reach the ridge hump on the main ridge crest just north of Baker Peak. This hump is a talus heap and has a repeater on it. There are actually a couple of talus humps here, so a talus scramble is required in order to move south on the ridge. Follow the rocky ridge south on reasonable rock to reach the summit hump of Baker Peak. The summit had a small, torn-down cairn which I rebuilt. 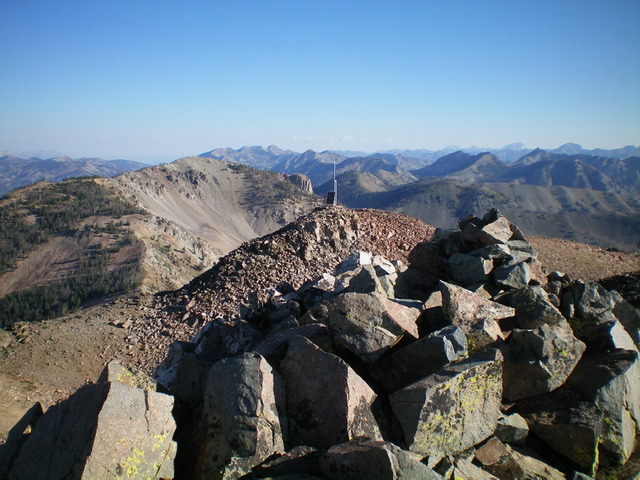 The summit of Baker Peak with Backdrop Peak in the distance (left of center). Livingston Douglas Photo

From the summit, head east down a ridge of easy scrub and broken rock to a small, gentle saddle at 9,820 feet. This is the connecting saddle with Peak 10137 and concludes the first leg of today’s 2-peak adventure. Peak 10137 is up next. 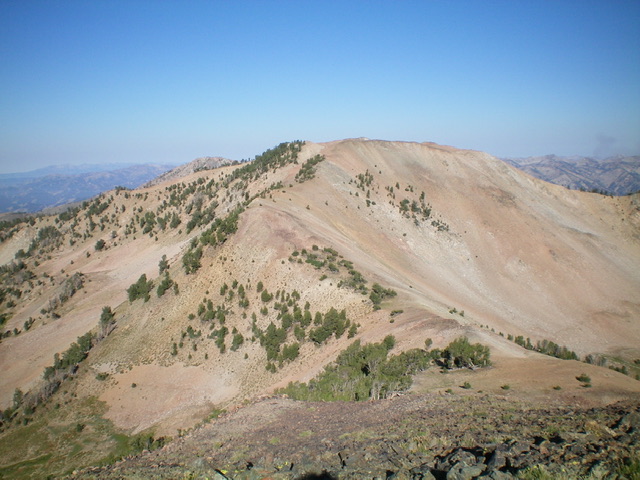