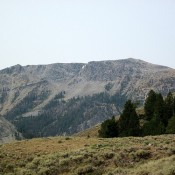 Climbing and access information for this peak is on Pages 304-305 of the book. Updates include (1) A link to the updated access page, (2) Ray Brooks’ trip report covering some of the peak’s interesting history and (3) Livingston Douglas’ west ridge route, a likely first ascent. Updated December 2019

Big Windy Peak is situated on the main Lemhi Range Crest, south of Sheep Mountain and just north of Trail Peak. The peak’s summit area is the largest that I know of in Idaho. It’s hard to figure out where the high point is on the open expanse that comprises the summit. See the Spring Mountain Canyon Road page for access details. A road leads almost to its lofty summit. Big Windy Peak was used as a fire lookout in the 1930s. Climb the peak via a short walk from the road on its north side. USGS Big Windy Peak 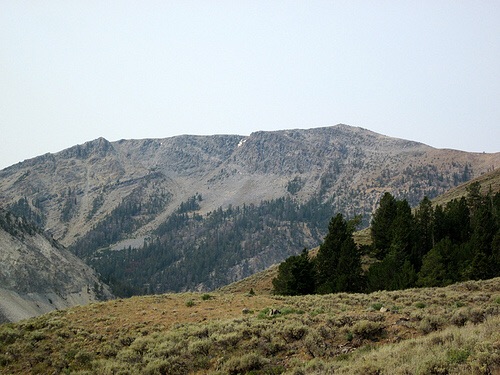 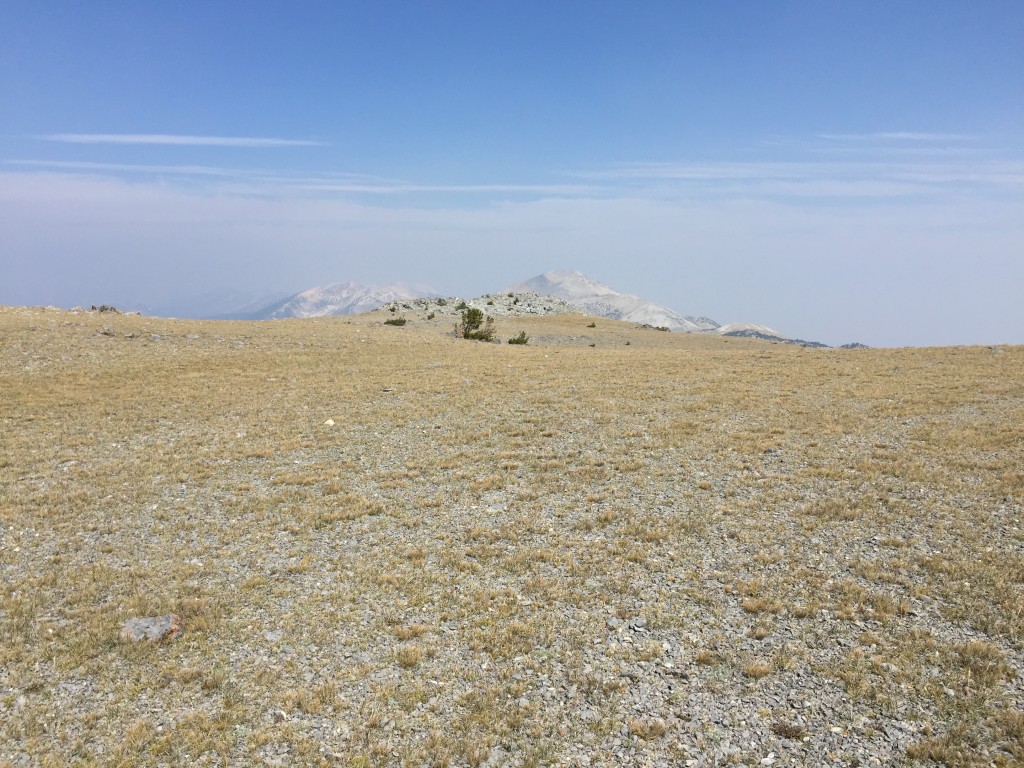 I blush to admit to the forum that my only mountain this year is 10,390-foot Big Windy Peak in the Lemhi Range. However, I did not ride an ATV to the summit plateau. I parked my 4-Runner at 10,000 feet and defied the local ethic (“it ain’t worth going if you can’t drive there”) by walking a mile to the summit.

Rick Baugher has a short but interesting write-up on the subject of Idaho fire lookouts on the Idaho A Climbing Guide website. He notes there were 36 lookouts above 9,000 feet. Big Windy Peak has a huge summit plateau, but just south of the north-most high-point I found what appears to be the remains of an early 1900s tent cabin. There is also a fallen telephone pole with missing insulators. A very well-defined trail leads a few feet to the summit. No mines are closely adjacent. Several old telephone poles are still standing in the upper Squaw Creek drainage that goes down to Little Lost River.

Does anyone have an opinion? 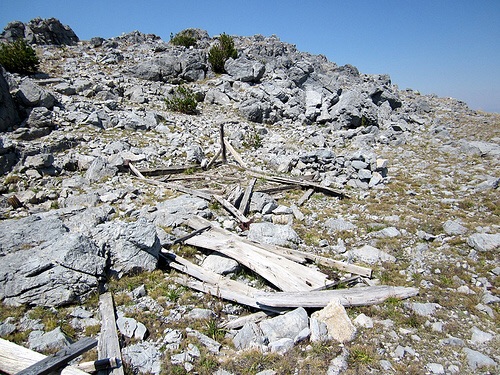 The tent cabin with a trail to the summit in the background. Ray Brooks Photo 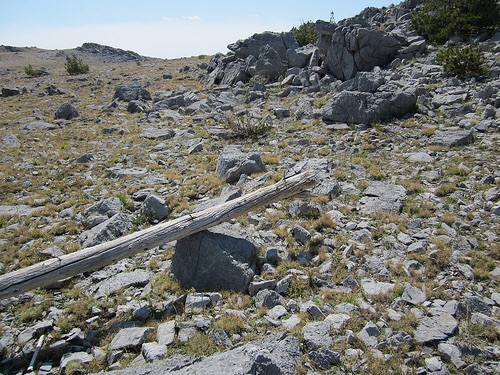 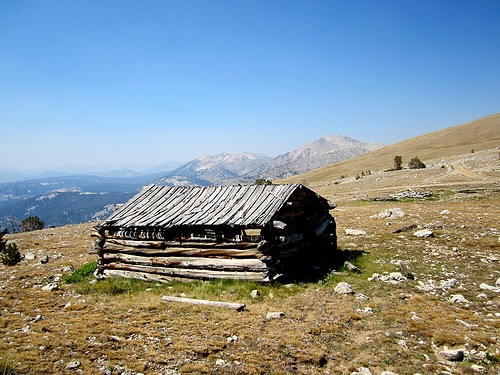 Scenic up there if you like old mining history. Thankfully, it was a low-smoke day. Ray Brooks Photo 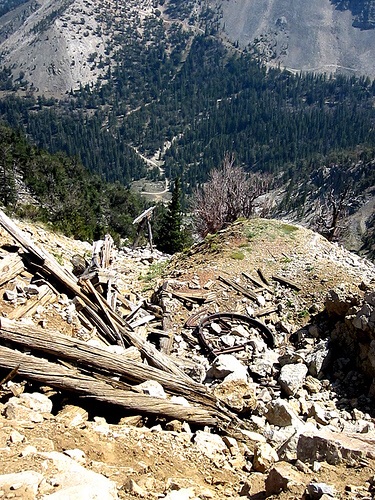 The top of a mining tramway, with the top tram wheel and one tram tower still showing. Ray Brooks Photo

Sawmill Canyon Road/FSR-101 is located 36.6 miles north of Howe on the Little Lost River Highway. Turn right/east onto [signed] Sawmill Canyon Road at a fork in the highway. At 6.7 miles, reach the Challis National Forest boundary. At 8.0 miles, reach a junction with [signed] Squaw Creek Road/FSR-102. Turn right/east onto FSR-102 and drive 0.7 mile to the base of the west ridge of Big Windy Peak. Park here (6,935 feet).

There are three shoulders that terminate on the east side of FSR-102. All of them lead up to a critical saddle at 7,620 feet on the west ridge of Big Windy Peak. I chose to climb the middle shoulder because it is open scrub (not forested like the third shoulder) and it is the most direct route to the 7,620-foot saddle. Leave FSR-102 and bushwhack east up through easy scrub and skirt the north side of a ridge hump to reach the saddle. The sagebrush traverse (and 70-foot drop) to the saddle is thick and punishing.

From the gentle, broad saddle, climb east-northeast in somewhat unpleasant sagebrush to reach the forest at a narrow ridge point. The ridge is now narrow and well-defined. But it is also rough. The ridge terrain is a combination of pines, blowdown, embedded talus, and rocky outcrops/towers. You will quickly reach a flattish, saddle-like area at 8,000 feet from which you can see the rocky ridge challenge ahead. This next ridge section is the crux of the climb (Class 3).

Though the USGS topo map suggests otherwise, the left/north side of the rocky ridge crest goes best. You can skirt most of the Class 5 ridge towers by side-hilling on loose scree at the base of the towers/cliffs. Higher up, it is easier just to climb up through the ridge chop or stay close to the ridge crest on its left/north side. Once you pass the ridge towers, push upward through open forest with an annoying talus base and lots of blowdown.

At about 9,400 feet, the slope eases considerably. Cruise through a flat forested area for almost a mile, going over Point 9610 on the way. Descend southeast to a beautiful, hidden, grassy saddle at the base of the west face of Big Windy Peak. From the saddle, bushwhack east-southeast up through the pine forest. This forested area is somewhat steep with blowdown to navigate. Cross 2 jeep roads on the way to the ridge crest of the north ridge. Reach the north ridge at a rocky outcrop that is well-cairned. Follow the ridge crest south to the broad summit of Big Windy Peak.

Good luck finding the high point of this one. You’ll have to wander around and stand on at least three different potential summits to satisfy yourself that you stood on the top. There is a rocky north summit (I built a cairn here), a grassy middle summit with a post, and a rocky south summit. They all measure of identical height. Yes, there is a 6-foot tall cairn in the middle summit area (on its west side, not at the high point) that is meaningless. 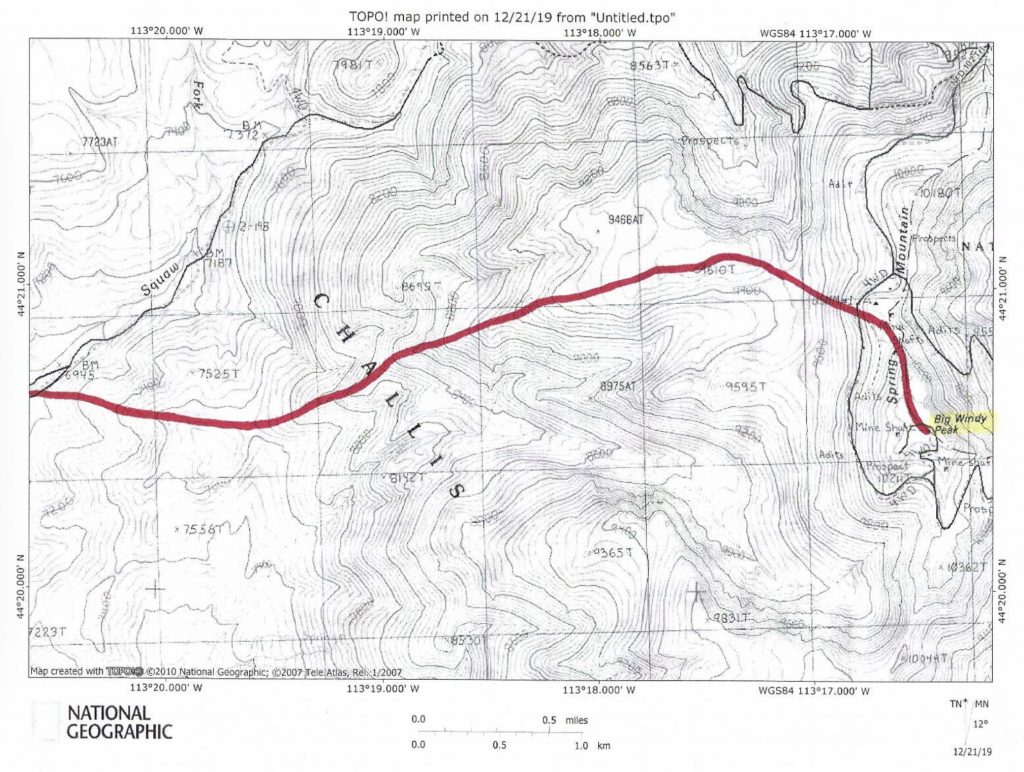 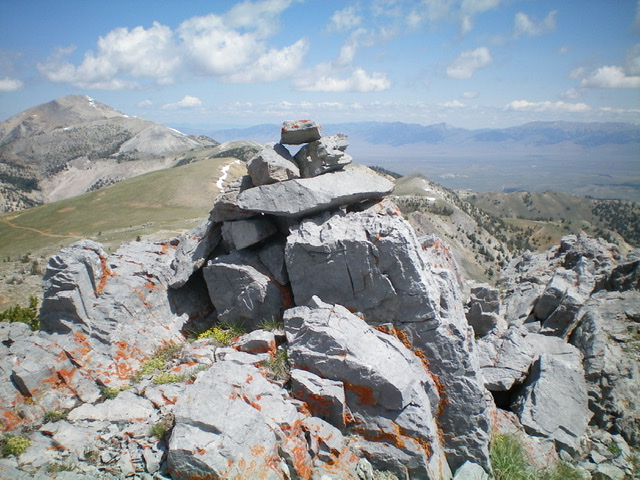 The newly-built summit cairn atop the north summit of Big Windy Peak. I believe that this is probably the high point, if there is one. Sheep Mountain is in the distance to the left. Livingston Douglas Photo