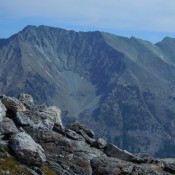 This peak is not in the book. Judi Steciak and Carl Hamke provided the Southwest Ridge route information. See their article on the Missing Eleveners in the Climbing History Section of this site. Derek Percoski climbed the West Face. His route is set out at the bottom of the page. Use this link to Pat McGrane’s Wildhorse Classics Guide for information on technical climbing on the peak. Updated August 2020

This peak is 1.5 miles east of the Wildhorse Mine. Improvements made in 2012 to the 4WD road up Wildhorse Canyon [(C)(1) on Page 259] block the road at the start of the first switchback marked on the topographic map. There is a small parking area here.  Walk up the road until the clearing at the 8,200-foot contour. Follow the clearing up and continue to the ridge top 3,200 feet above. Follow the Southwest Ridge to the summit, crossing back and forth over the crest as needed. Akin to its neighbor (The Fin) across the valley to the east, this route is one of the best ridge scrambles in Idaho.

Steve Grantham and David Ferguson followed the Southwest Ridge to the summit on July 18, 2009. This was Dave’s first climb after hip replacement. 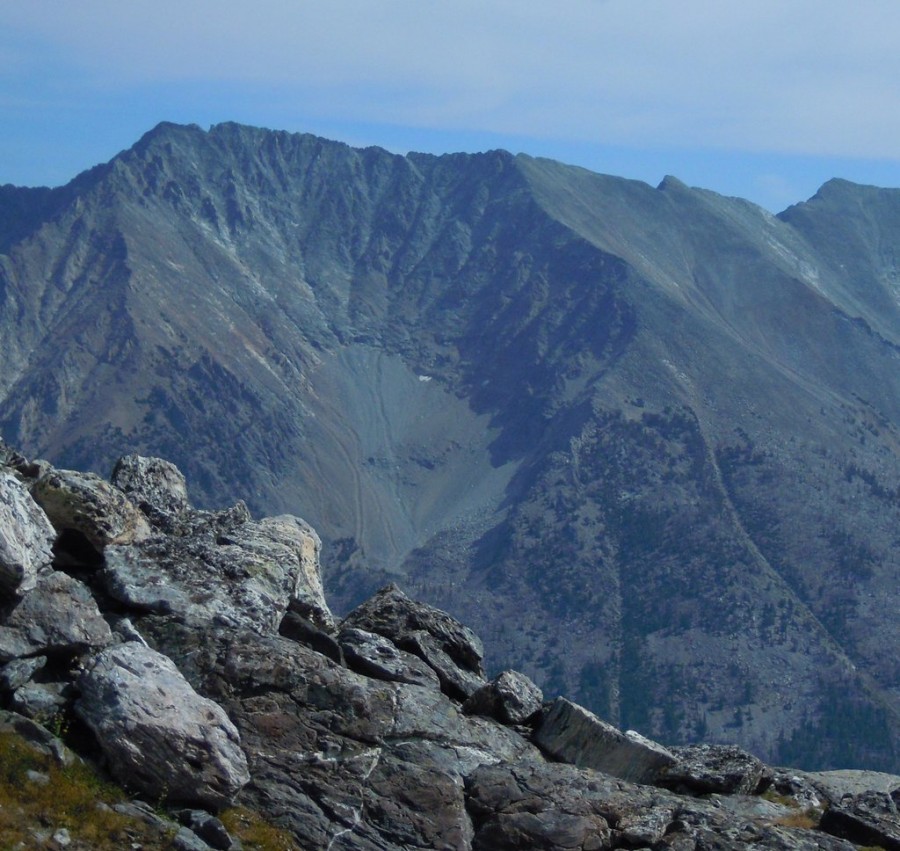 Judi and Carl provided the following information soon after they climbed the peak:

Last Saturday, we climbed the Southwest Ridge of Gabriels Horn/Peak 11641 in the Pioneer Mountains.  We had no route information beforehand.  It was a wonderful surprise to work out a scrambling route along the ~1/3 mile ridge (with only 200 feet of gross elevation gain from the southern bump to the summit).  It was one of the best quality ridge scrambles we’ve done in Idaho. It reminded us of The Fin/Peak 11887 in the Pioneer Mountains.

We went over the crest of the southernmost bump, dropped down to the E side of the ridge and stayed off the crest until we were forced back up and over to the W side for a while, repeated this twice and we were on the summit.  Many small towers and ribs blocked our view of the summit. It felt like the ridge would go on forever. It was actually only about an hour each way.  We returned on the same route because we were having so much fun.  The rock was stable where it needed to be.  We thought that the exposure was greatest near the start and at just one or two other short spots.  Good/careful route finding skills are essential to remain on terrain that is no more difficult than Class 3+.

In the summit register, a party in 2009 said they had also followed the Southwest Ridge, while another party said ‘never to be repeated’ regarding the Northwest Ridge. The only downside of this peak was the steep, sometimes bouldery, Class 2 walk up from where the 8,200-foot contour crosses the former upper extent of the Wildhorse Canyon Road.   We gained about 3,200 feet in just over a mile.  We took an alternate route down that brought us to the valley a 1/2 mile farther south, but it was still a challenge for my aging knees.

The Forest Service improved Wildhorse Canyon Road this past September.  Some of these changes were good, whereas others we wondered about. They bulldozed out some of the worst rocks near Wildhorse Canyon Campground, dug a ditch at the worst wet spot, added many aggressive water bars (the trailer hitch of our 4WD high-clearance truck kept bottoming out on the drive up), blocked all of the dispersed camp sites with boulders and/or felled trees, and blocked the road completely just before the first of the switchbacks. This shortened the distance you can drive in by 3/4 of a mile or so. They made a small parking area for 4-5 vehicles, although it will be tough to turn around if that many vehicles are actually parked there.

Like others, I do highly recommend climbing this peak via the SW ridge route—but the entire west face is reasonable Class 3 terrain. This could be useful info for a climber looking to get off the peak quickly. I dropped straight off the summit and descended this way out of curiosity to explore a new route. There’s a bit of a cliff band where the solid rock meets the talus (~10,400’), but it’s easy to find a way through. If a climber did want to ascend this way, GPS navigation would be useful for topping out on target as it will be difficult to tell where the summit is on your way up. The two photos below show the face from below and above. 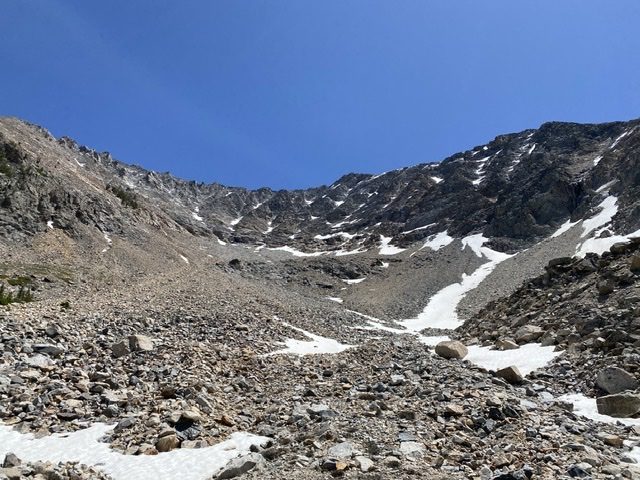 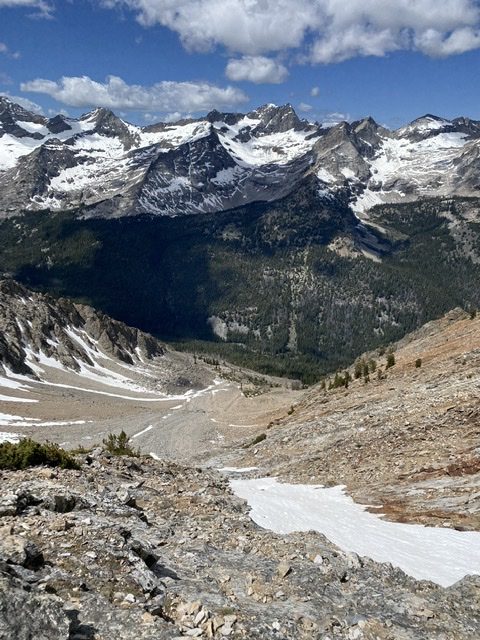