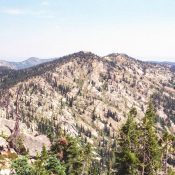 Climbing and access information for this peak is on Page 71 of the book. Mike Hays has provided this extensive update to the information found in the book.

Indian Peak is the highest point on the divide between Schwar Creek and Buck Lake Creek, two major northern tributaries in the vast Meadow Creek drainage which, after Moose Creek, are the largest tributaries of the Selway River. Indian Peak’s summit is an unassuming rounded hump on the end of a long ridge that is almost the same elevation. The summit is just inside the boundary of the Selway-Bitterroot Wilderness and is one of the more remote places to reach in North Central Idaho. It’s not a technical mountain and is easily walked up; however, it is a long hike.  USGS Running Lake 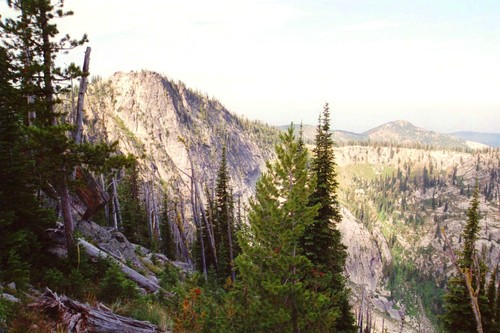 The view of the steep North Face of Indian Peak as viewed from high on the North Ridge (July 2007). Mike Hays Photo

The relatively-flat summit area is formed by a pile of large granite rocks. The broad south and west aspects fall gently to broad ridges radiating from the mountain. The southwest aspect between these ridges drops steeply about 800 feet to the bottom of the remote Snowslide Creek. The north side is formed by sheer cliffs that fall over 900 feet to the head of an unnamed subalpine basin. The open eastern slopes descend to Schwar Creek approximately 2,300 feet below. The long North Ridge runs around the east side of the rugged North Face along a nice open subalpine boulder hop or walk on the subalpine beach formed by the decomposed granite. The ridge eventually ties in with the pass above Grave Meadow, which sits at the head of the basin about 1.5 miles northeast of the summit.

The mountain provides good views across Schwar Creek to the large masses of Bilk Mountain and Elk Mountain. Westerly views are dominated by the picturesque form of Vermilion Peak and the Copper Buttes in front of endless waves of smaller tree-covered mountains and ridges that stretch to the horizon and fall into the Selway to the north. Looking north, the ridge dominates the view as it stretches away toward the Selway. But the best view by far is to the south at the pile of giant rocks that form the Rocky Peak pyramid. Look for the hot-pink wildflower, Idaho Douglasia. The Elk Mountain area supports the largest extended population of this endemic on the planet. These flowers are common on the north end of the ridge top. This stunning species was described by botanists in the early 1980s.

Indian Peak is accessed from the Magruder Corridor Road via FSR-468 from Grangeville, ID or from Montana. From the western terminus of the road, head east for 19 miles to the junction of FSR-285, which is signed for Green Mountain. Turn left onto FSR-285 and continue 15 miles to the trailhead, just south of Elk Mountain. FSR-285 road is narrow and takes some time to navigate safely. Road use can be high on weekends and during hunting season, so anticipate oncoming vehicles on the road turns.

From the trailhead, hike up FST-517 north over Elk Mountain and Bilk Mountain. Continue west across the Schwar/Marten Divide to Grave Meadow. Leave the trail here. This is a distance of about 7 miles. Next, get onto the high ridge to the west. Either climb up the steep slope west of the meadow or follow the trail north for a few minutes from the meadow and get onto the ridge at the saddle. Once on the ridge, continue south to the rounded high point of Indian Peak. This point is just a couple of miles from the Grave Meadow area. It is tempting to leave the trail in the Elk Mountain area, drop down into Schwar Creek, and go up the east side of Indian Peak. However, Schwar Creek is wide, deep, and brushy and a cross-country crossing is not recommended. 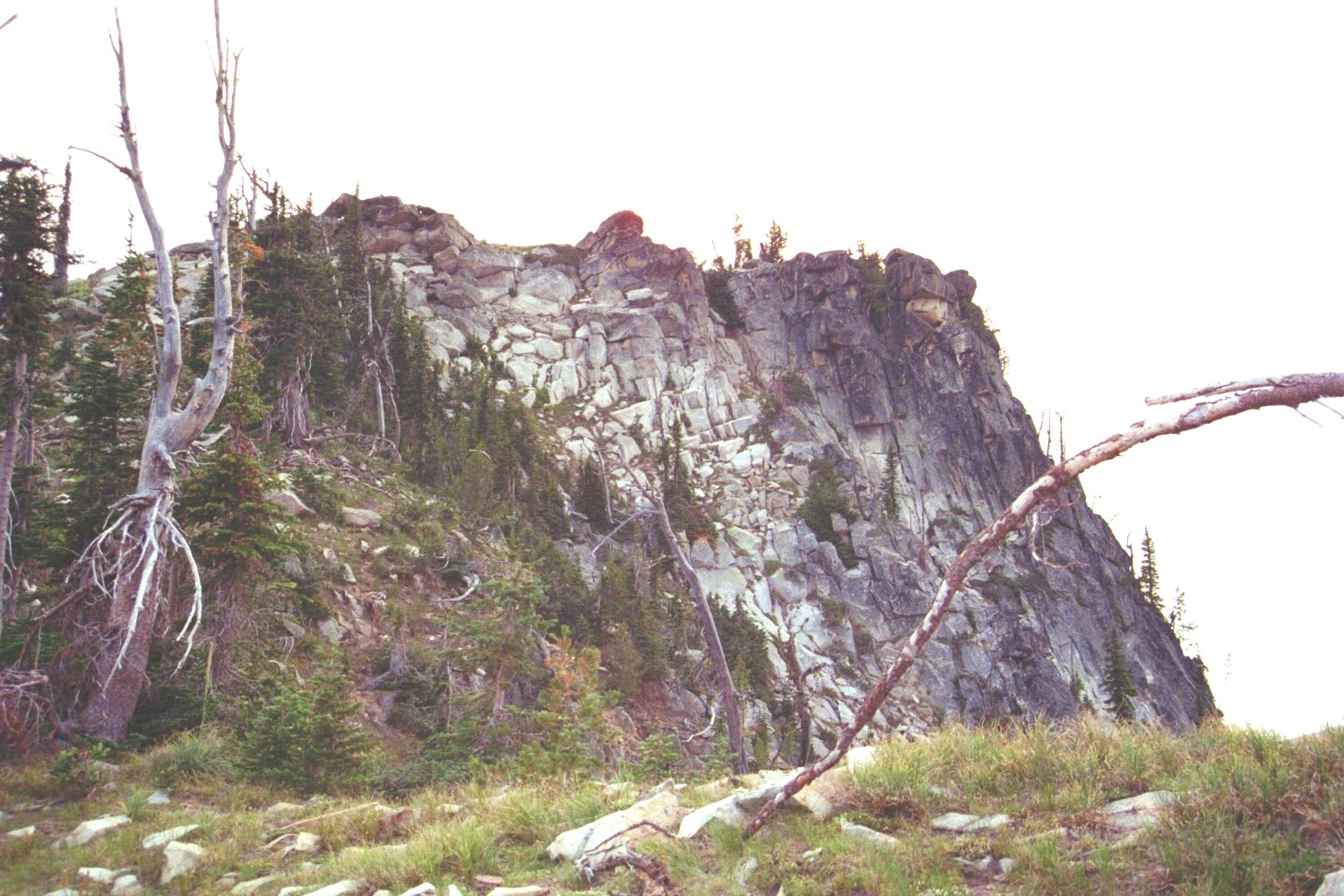 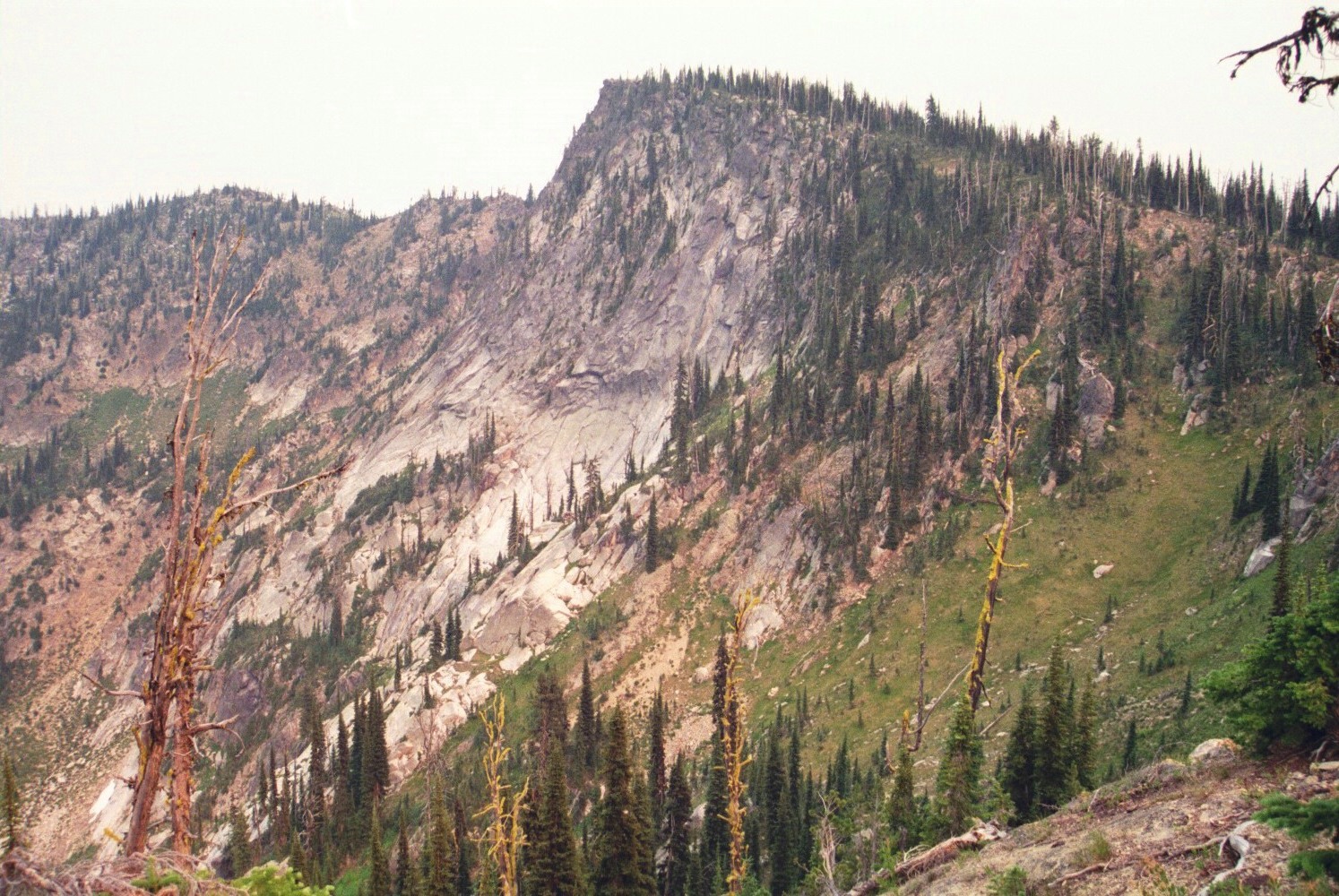 The view of Indian Peak from the ridge that runs northwest from the summit. Most of the mountain is characterized by gradual slopes but the North Face is steep and rugged. The dim light is due to forest-fire smoke (July 2007). Mike Hays Photo 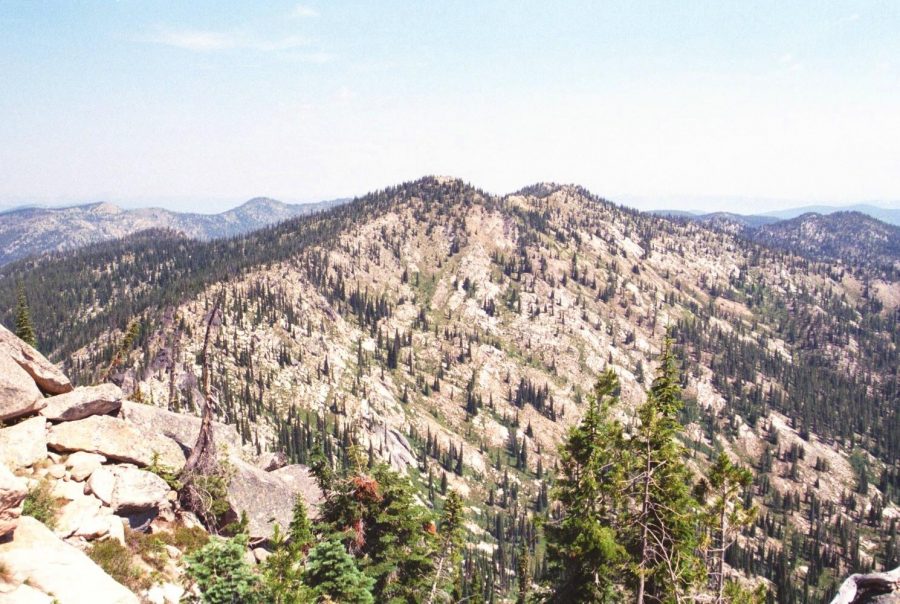 This is the gentle south side of Indian Peak. The ridge running north is basically as high as the high point. This view is from Rocky Peak (July 2007). Mike Hays Photo