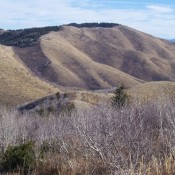 This peak is not in the book. Rick Baugher suggested the name to honor Idaho’s last Democrat governor. Rick’s notes are found below. Livingston Douglas climbed and documented the northern approach, the recommended route to the summit. I added the route description for the southern approach from the south and Peak 7217. Updated January 2023 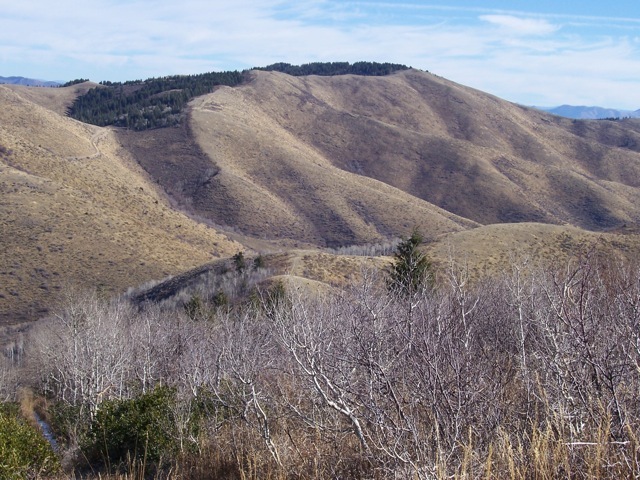 View northeast to John Evans Mountain on 11/4/09. By early November, cows are off the range, the main hunting season is over, and the land is quiet. Rick Baugher Photo

This peak is most easily reached from BLM-657 to its northwest via an unofficial 2-track road that meanders on or near the crest of the northwest ridge and leads all the way to the semi-open summit. A decent BLM road leads up to a nearby saddle then a hike up a 2-track road leads from the saddle to the top (Class 1). The water tower that Rick Baugher photographed is now gone and only wooden remnants remain. 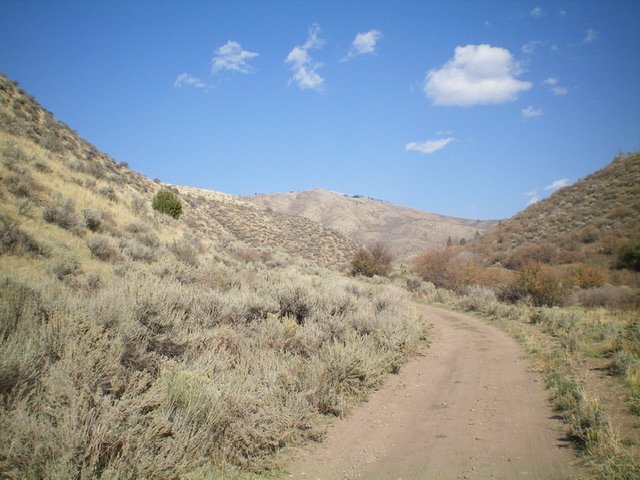 Pleasantview Hills HP (dead center in distance with pine trees on its summit) as viewed from Wood Canyon to its southwest. Livingston Douglas Photo

There is no National Forest map for this area. The USGS topo map fails to show many of the old 2-track roads on the ridges in this area, two of which were very helpful in this 3-peak journey.

From the 6,780-foot connecting saddle with Peak 7161, follow a 2-track road along the left/north side of a fence row that runs along the ridgeline southeast then east then southeast to the top of Point 7357, the [lower] west summit of Pleasantview Hills HP. The fence row stays on the ridgeline whereas the 2-track road skirts ridge points along the way, including Point 9357. If you follow the ridgeline, this ridge traverse is Class 2 and there is a footpath to help you follow the fence row. If you remain on the 2-track road the entire way to the summit, the ridge traverse is Class 1.

The ridge terrain is mostly open, but there is an initial forested section above the 6,780-foot connecting saddle and there are forested sections on the north side of the ridge, particularly between Point 9357 and the summit. The 2-track road drops well below the ridge and disappears into the forest in some of these sections. Not being sure of where the road was going (it is not shown on the USGS topo map), I stayed on the ridge crest all the way to the summit, using the road at times when it was close to the ridge to expedite the ridge traverse.

From Point 9357, the ridge drops 80 vertical feet down a mix of rock and scrub to a saddle. From that final saddle, follow the ridge crest east and then left-ish/northeast to the semi-open, ridgeline summit area. The ridge crest stays to the right of the pine forest as it heads to the summit area. The high point has extensive remains of a former water tower. There are two potential high points, each with a summit cairn. The first cairn is amidst the wooden and metal wreckage of the water tower. The second cairn is a bit farther to the northeast (by about 50 yards) and is on the edge of the pine forest. The second cairn is probably on a slightly higher point than the first cairn and is probably the highest point atop Pleasantview Hills HP. According to my altimeter, both points are of equal height. 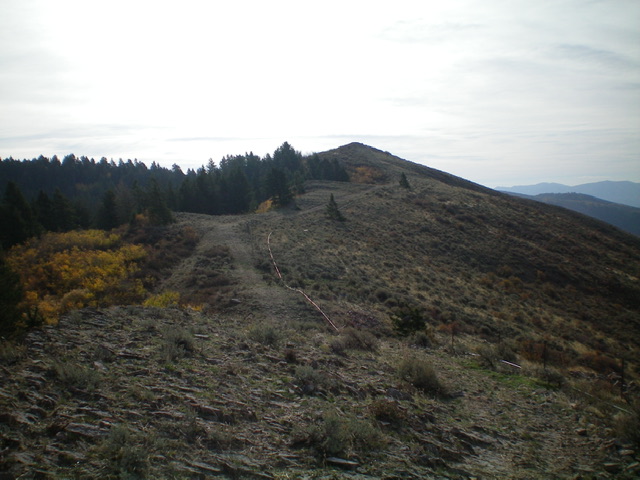 Hiking up the west ridge on the approach to Point 7357. The forested summit hump is not yet in view. Livingston Douglas Photo 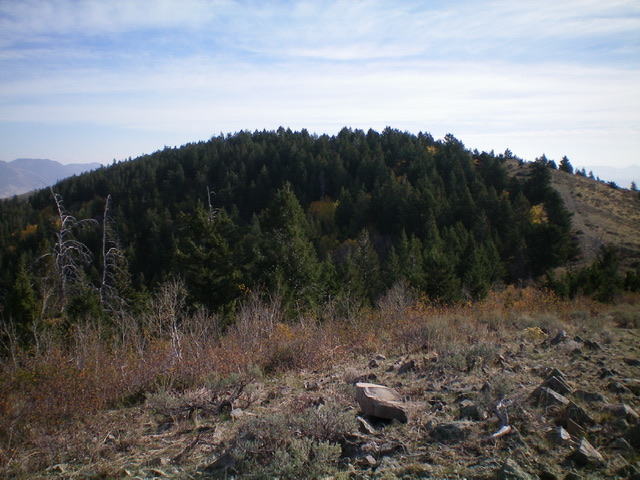 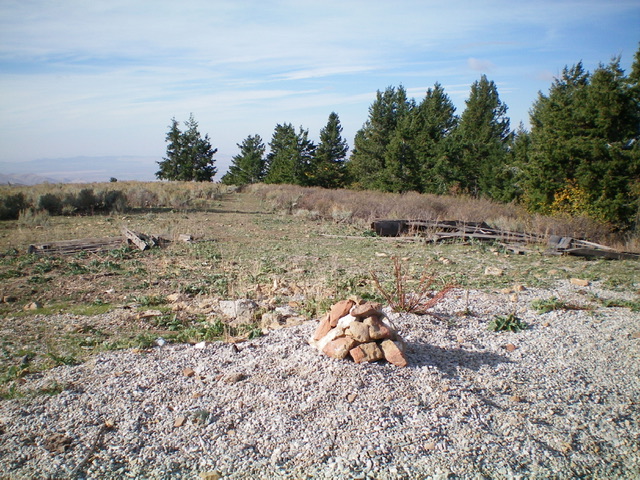 The summit of Pleasantview Hills HP and its newly-built summit cairn. The wooden remnants of the old water tank lay nearby. Livingston Douglas Photo

From the summit, return to the [lower] west summit. From Point 9357, descend south on a splendid open ridge of mostly field grass then a mix of sagebrush and grass. The sagebrush gets thicker as you descend. The south spur forks lower down. Exit the south spur to its right/southwest here. Descend into a dry gully, passing a patch of trees on their left side. Follow a cattle trail in or next to the center of the gully as the gully heads south to reach Wood Canyon Road. Hike right/west down the road for about ½ mile to reach the corral and road junction where your parked vehicle awaits.

This route follows a fence line and an ATV/4WD road for nearly the entire distance. From the summit of Peak 7217 descend the peak’s north ridge dropping 200 feet. The ridge jogs to the northwest and drops to a saddle at roughly 6,680 feet of elevation. From this saddle the route climbs generally in a northernly direction crossing over Point 6869 and Point 7014 before reach the slopes just below the summit. 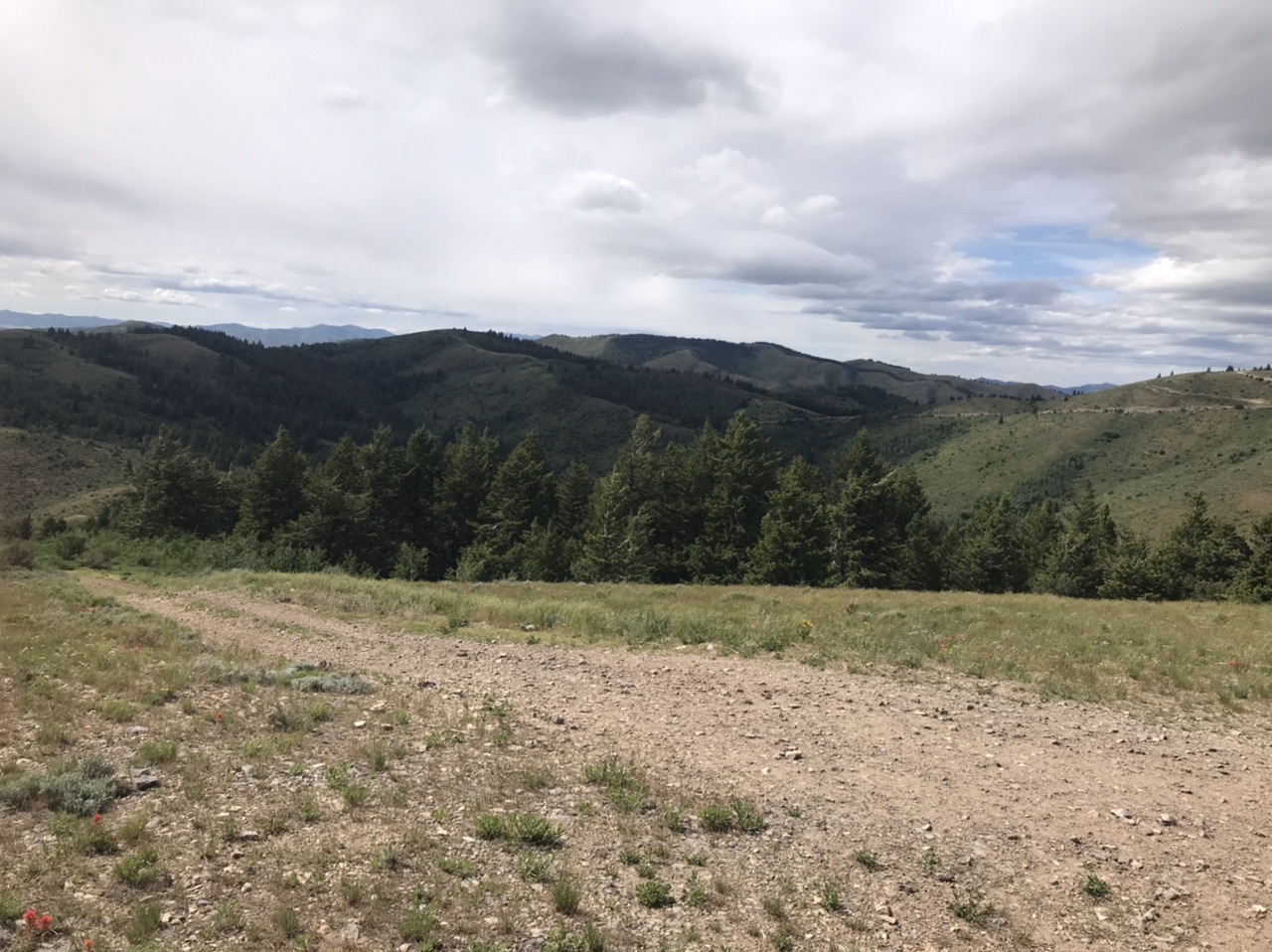 The peak sits at the head of John Evans Canyon. On April 12, 2004, Rick Baugher rode up the left fork of John Evans Canyon until stopped by snowcover at 5,700 feet. From there, it was soon possible to hike a mostly snow-free spur ridge heading west and north to the forested top of what has been called “John Evans Mountain.” 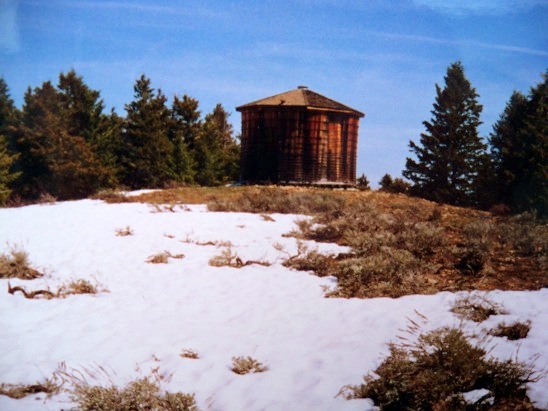 The summit has a surprise: a 20-foot wooden water tank. When you see the symbol “WT” on topo maps, you never know what you’ll get. In any event, this is irrigated cattle country. The ascent isn’t complete until you stand atop the water tank. Watch for splinters.

John Victor Evans (1925-2014) was born and raised at the base of the Pleasantview Hills in Malad, Idaho. He was a farmer, a devoted family man, a civic leader, and principle in the regional DL Evans Bank. In 1977, he became Governor of the State of Idaho and served until 1986. In a poll, Evans was ranked 77 out of 100 people who have had the most to do with making Idaho as we now know it.