Climbing and access information for this peak is on Page 204 of the book. Brian Fedigan and Mike McClure climbed the peak in 2020. Brian’s trip report is set out below. The North Raker’s summit spire, unlike Baron Spire, survived the 2020 earthquakes. Updated August 2020

Perhaps no other Idaho peak is more mysterious than North Raker. The Rakers first caught the attention of the Underhills in 1934. The first ascent took another 15 years when it was climbed by Fred Beckey and Pete Schoening in 1949. The Rakers are in remote, trail-less country. I believe the peak has only been climbed 7 times since the first ascent. I have only viewed the Rakers from a distance, with the summit of Blacknose Mountain as my closest vantage point. Ray Brooks has provided several photos on this page from his explorations of the area. Enjoy. USGS Mount Everly 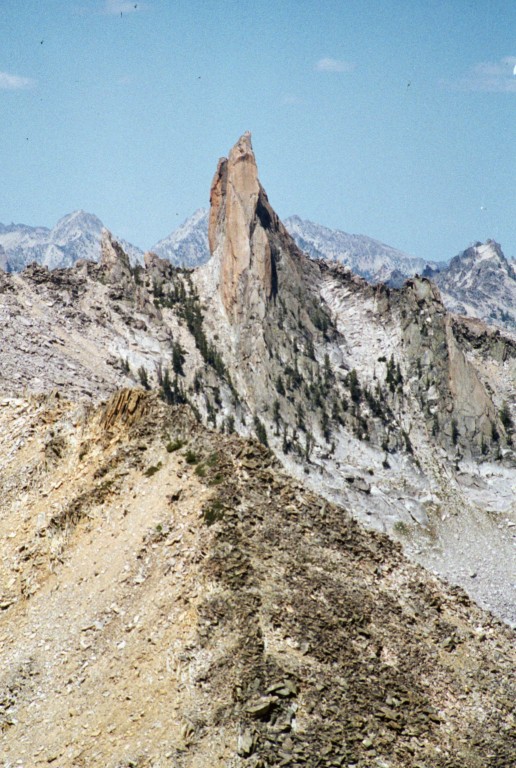 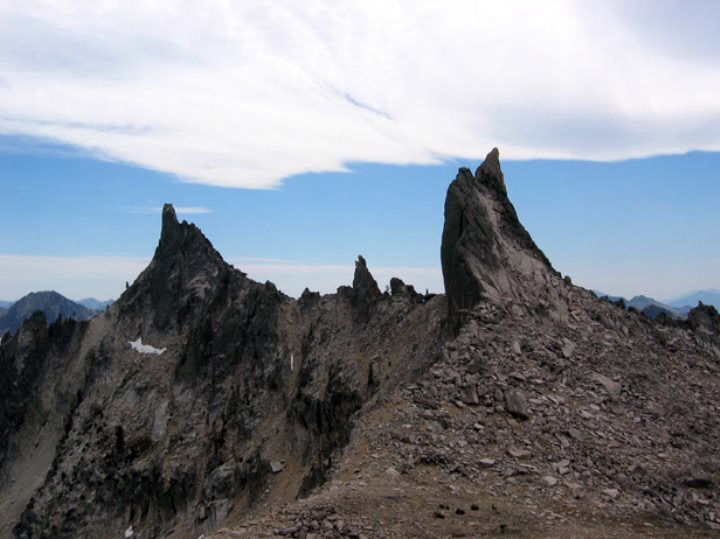 The North Side of North Raker (right) and what everyone but the USGS map calls South Raker is on the left. The USGS map shows a 9,558-foot bump 1/4 mile away as South Raker. Ray Brooks Photo

North Raker and South Raker as viewed from Mount Everly. 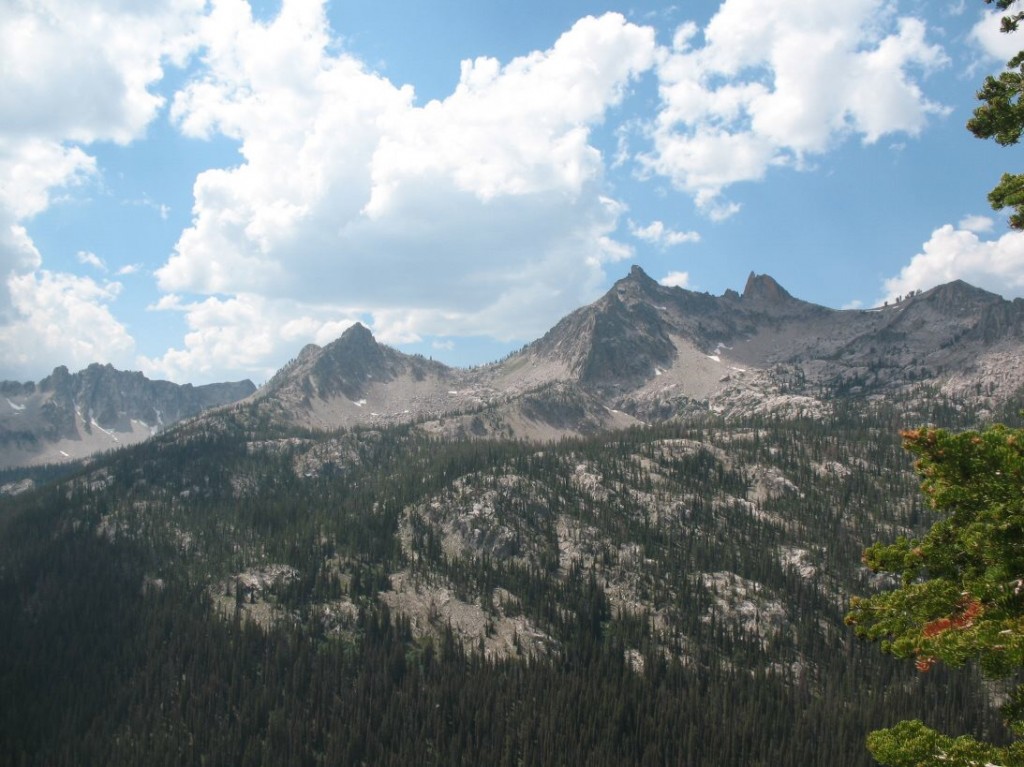 The Rakers as viewed from the ridge east & above Fall Creek, looking west. North Raker and South Raker are the obvious sharp summits at center. What the USGS calls South Raker is the next bump on the ridge to the left (south). Ray Brooks Photo 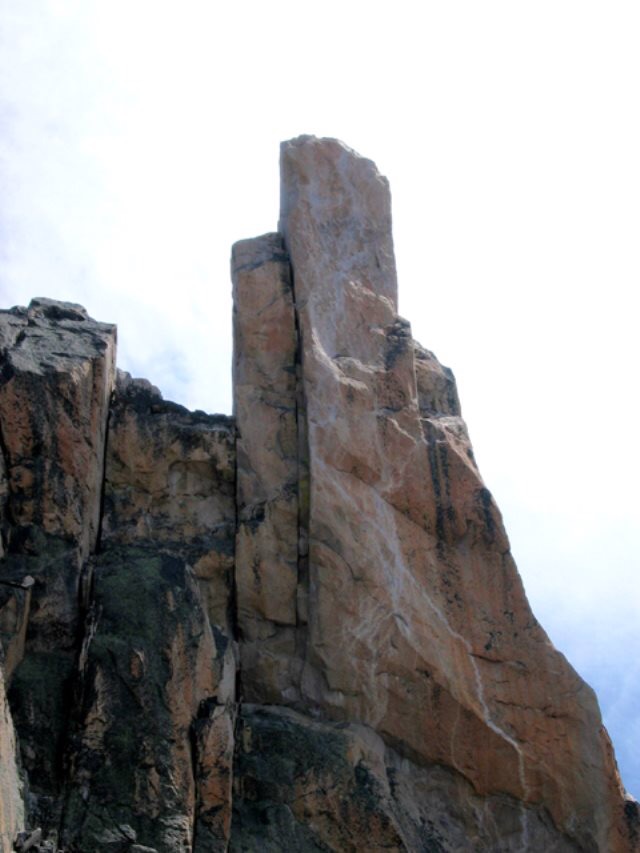 View of the West Side of North Raker. The original Beckey-Schoening route easily goes to the left-hand summit, then aid-climbs rotten rock to the right-hand summit. From the description, they probably climbed the large crack. Ray Brooks Photo 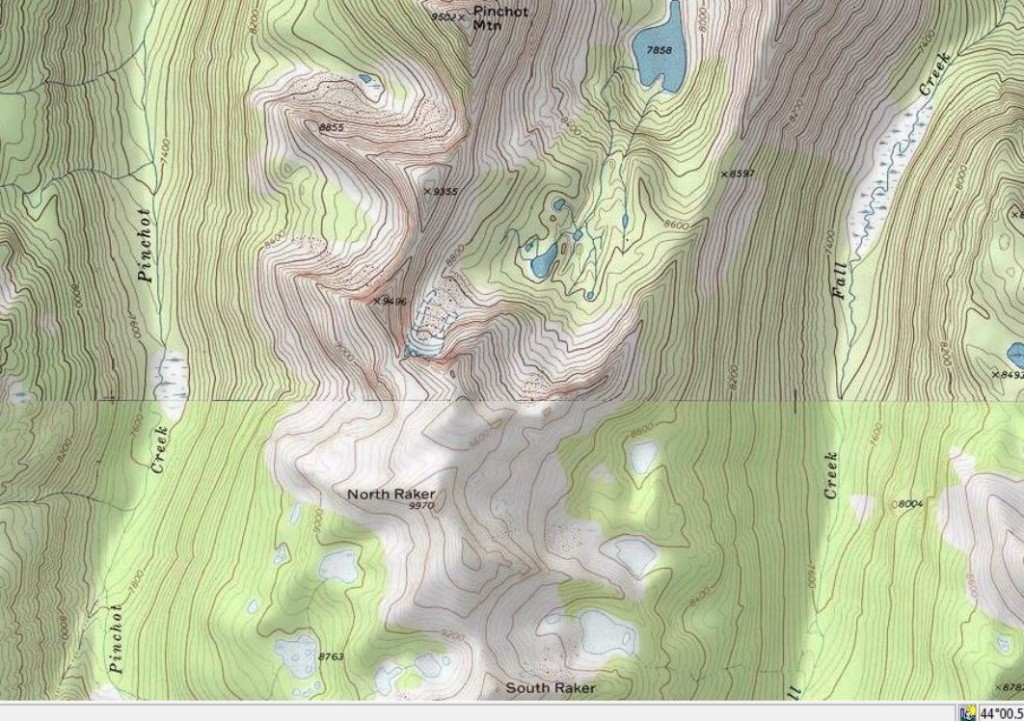 North is up. On my first trip in 2006, we did steep bushwhacking combined with climbing from near Fern Falls on the South Fork Payette to Lake 7858. In 2009, we went into Fall Creek. It also entailed route-finding and bushwhacking. No trails and no signs of humans. Lots of wolf and bear sign. Ray Brooks Map

Brian Fedigan and Mike McClure conquered the peak this summer. Brian’s trip report and photos are set out below.

“Mike McClure and I ascended the North Raker. We both onsighted the route; don’t know if it was a first free ascent or not. We scrambled to the notch mostly 4th class with some 5th class moves in there. We took off our approach shoes and racked up. We traversed about 100 feet to into a notch. This pitch was loose 5.8. We set up a belay and than Mike led off. He stepped on a large loose flake and traversed downward to gain the large crack. There was several large loose chockstones in the crack. The crack varied from hands to offwidth. We used most #3s and #2s to protect the pitch. There were two old pitons, and one old button head bolt. There was a new bolt located at the widest section of the crack. We were able to fist jam, hand stack and chicken wing through this section. There were several small foot holds that allowed us to surmount this section. The crack was steep in the wide section, but the angle decreased before coming to a large ledge. From here there was about 20 feet to the summit. We rapped off the summit to the notch. We than lead out of the notch back toward the false summit. We than unroped and downclimbed to the saddle. The crux pitch was mid to hard 5.10.“ 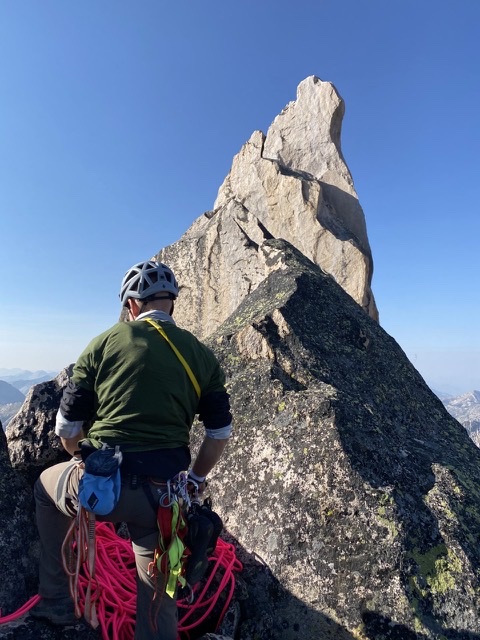 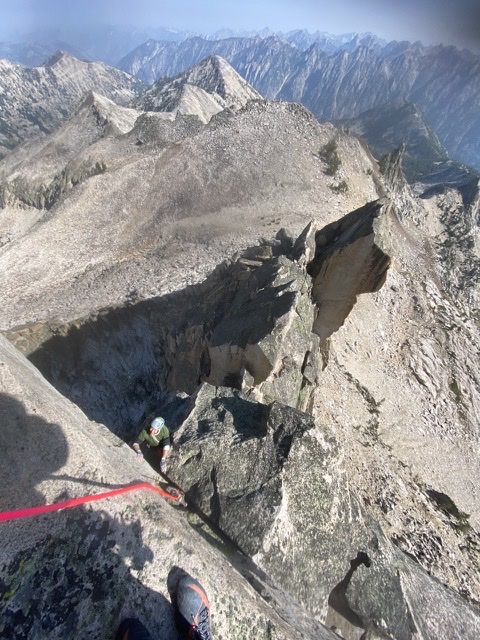 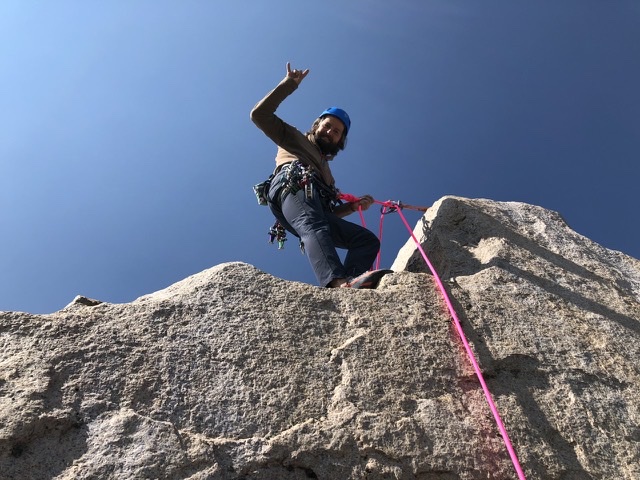