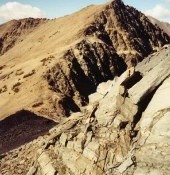 Climbing and access information for this peak is on Page 297 of the book. Livingston Douglas provides two new route descriptions set out below.

Peak 10775 (Buck Lakes Peak) is located on the main Lemhi Range Crest south of Lem Peak. Rick Baugher climbed this peak on October 4, 2000 and found no evidence of a prior ascent. USGS Lem Peak 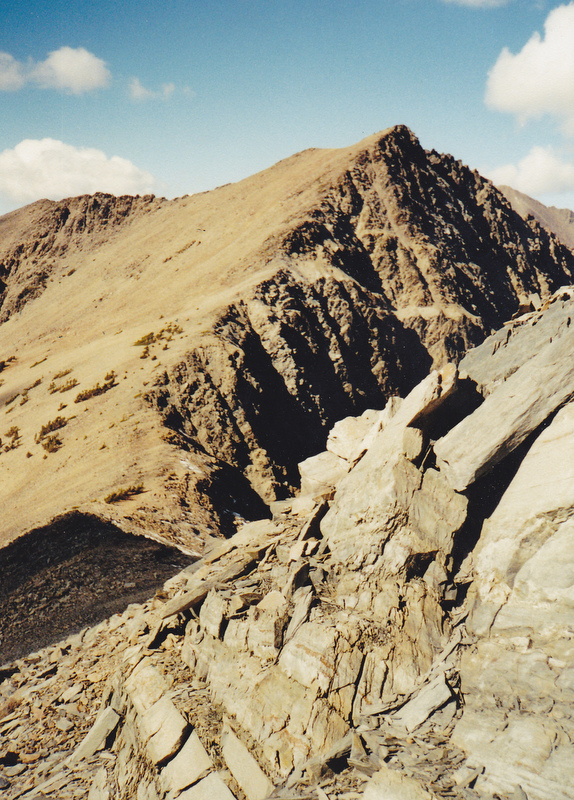 Peak 10775 as viewed from just above the 10,150-foot saddle on the main ridge crest. Rick Baugher Photo

This climb is part of a ridge traverse from Lem Peak to Peak 10744 (Wright Peak). From the Lem Peak/Peak 10775 saddle (at 10,100 feet), climb the ridge southeast then south to the summit of Peak 10775. This ridge looks daunting from a distance, but it’s actually relatively easy (mostly Class 2 with a bit of easy Class 3 thrown in). Stay on the west side of the ridge crest to minimize the technical difficulties. The east side of the ridge has stunning exposure; you might just get a nosebleed looking down it. Much better exposure than lofty Lem Peak. Peak 10775’s summit is a large boulder, with lots of “dinner-plate” shale scattered around. The summit had nothing on top, not even a cairn (so I built one). Apparently, this peak isn’t climbed too often.

This climb is part of a ridge traverse from Lem Peak to Peak 10744 (Wright Peak). I climbed the North Ridge Route to the summit, then descended the southeast ridge to the saddle between Peaks 10775 and 10744 at 10,140 feet. Be careful of the loose, dinner-plate shale on your descent, as you can easily lose your footing. Once again, there is fierce exposure on the east side of the ridge, so stay to the west side of the ridge to stay safe.