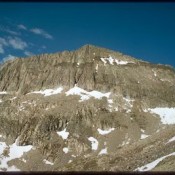 Climbing and access information for this peak is on Page 254 of the book. The book identifies Point 11887 (which is a spot elevation) as the peak’s true summit. Many who have climbed this peak, myself included, believe that the northernmost high point is the true summit. Derek Percoski  discusses this issue below. Thanks to his work, Lists of John now recognizes the northernmost point as the summit. Derek has also provided a route descriptions for climbing the peak’s South Ridge and extreme East Rib. Updated July 2022

The Fin is located due south of Standhope Peak. Its summit is an impressive fin-shaped conglomeration of granite towers and boulders. The highest point is located at the north end of the ridge crest. USGS Standhope Peak

The route described in the book leads over the northernmost high point to the 11,887 spot elevation rather than stopping at the true high point. Reaching the actual summit is much easier. Follow the route in book from the Standhope Peak/The Fin saddle up the peak’s North Ridge to high point on the summit ridge’s North End.

If you want to visit the South End of the summit ridge and Point 11887, you will find the traverse across The Fin challenging. The route finding is complicated. It will take all you have to find Point 11887 as you traverse, over and around the granite that makes up The Fin. You can easily find yourself on Class 4-5 terrain if you are not careful. If the climbing exceeds Class 3, you are off route. 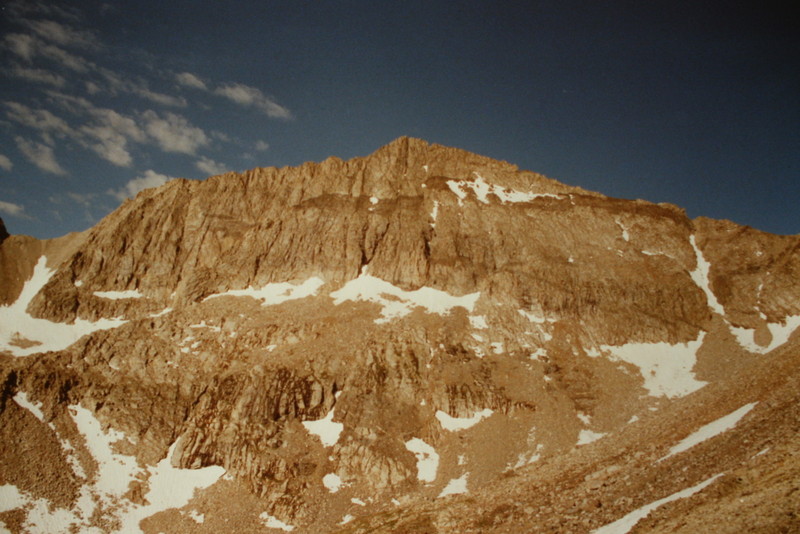 The Fin sits in the middle of a section of the Pioneer Mountains that is unsurpassed for its scenic qualities and its climbing opportunities. This shot shows the unclimbed East Face.

The True Summit by Derek Percoski

The two summit candidates for this peak that are 850 feet apart. Both have an 11,880-foot contour. The smaller of the two includes a spot elevation of 11,887 feet on the USGS Standhope Peak quadrangle. To those looking at maps, this is accepted as the summit and that’s the peak’s elevation. On scene, the North Summit appears higher from every perspective, and includes a small tower within that larger contour area. With an elevation range of 11,880-11,920 feet, this would put The Fin’s interpolated elevation at 11,900 feet if that were accepted as the high point. A detail-oriented climber should visit both summits just to be sure that their summit “counts.” 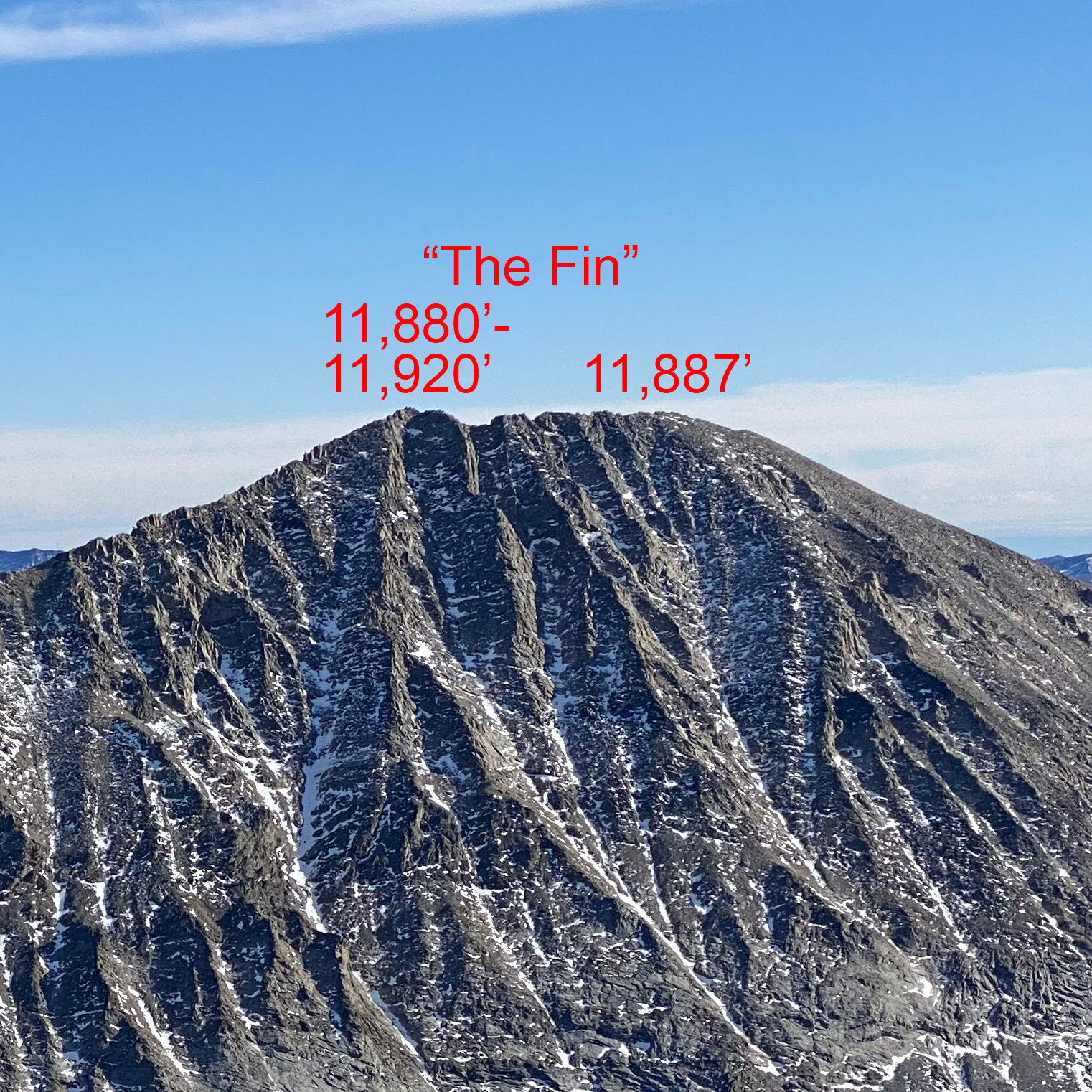 If a hiker wants to summit The Fin without doing any scrambling, it is possible via an 8-mile hike up Fall Creek. From the Recess Peak/The Fin saddle, it’s a simple walk up to the South Summit, where the 11,887-foot spot elevation is located. Getting to the North Summit (see above) requires a challenging Class 3 ridge traverse. 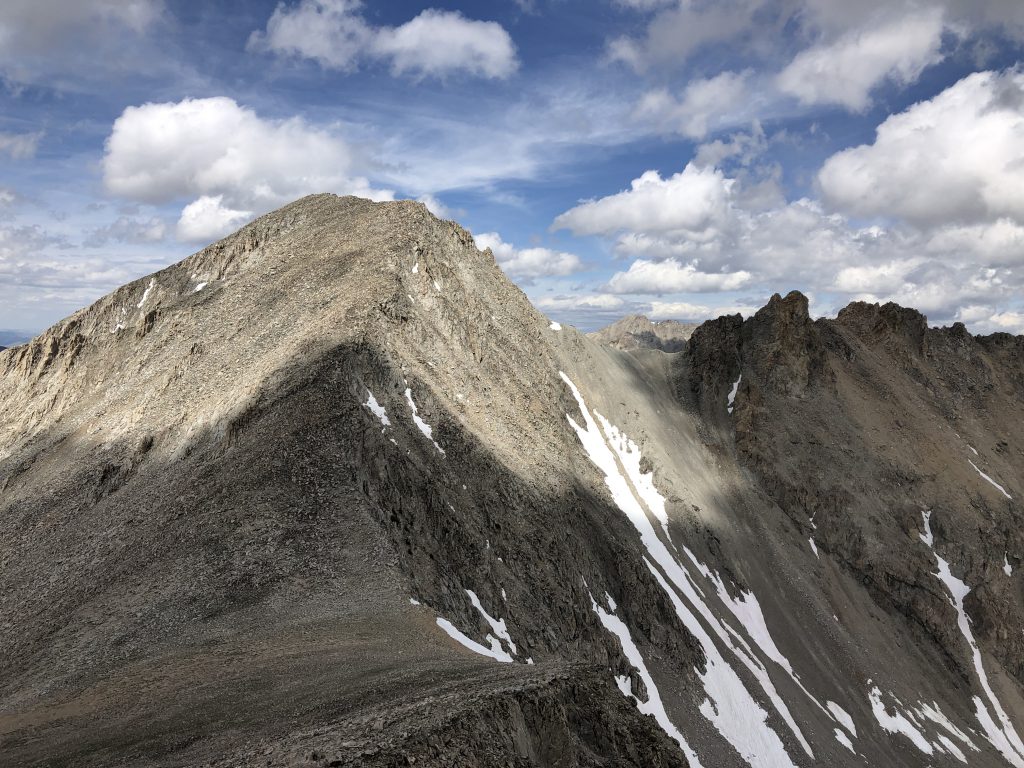 The South Ridge of The Fin as viewed from Recess Peak. Derek Percoski Photo 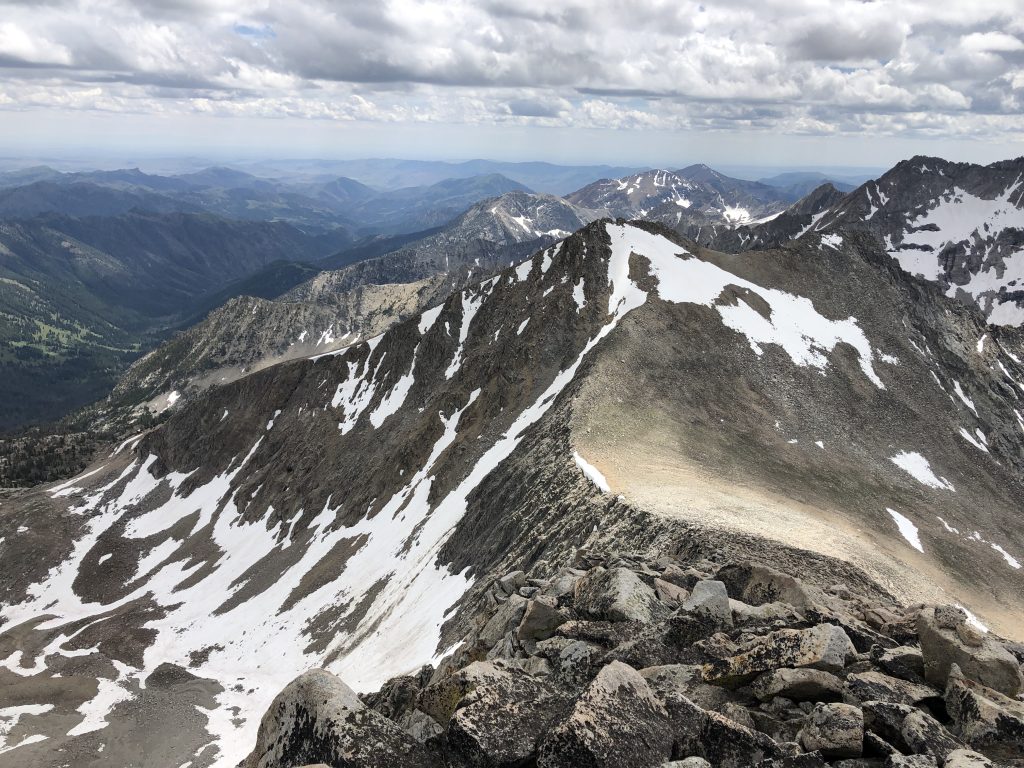 Looking down the South Ridge of The Fin toward Recess Peak. The rock in the foreground is illustrative of the entire ridge. Derek Percoski Photo

The east ridge of this peak caught my eye and I knew it wouldn’t be long before I returned to attempt it. The route was everything I hoped it would be: rocky quality as good as the north ridge but twice as steep. The crux came at the beginning. Taylor Amato and I climbed around 50′ that some would call low 5th class. There were a few other exciting sections along the way. Most (or possibly all) seemed like they could be avoided by moving toward the face, but we were determined to stay ridge-proper. We came for the route–not the summit. 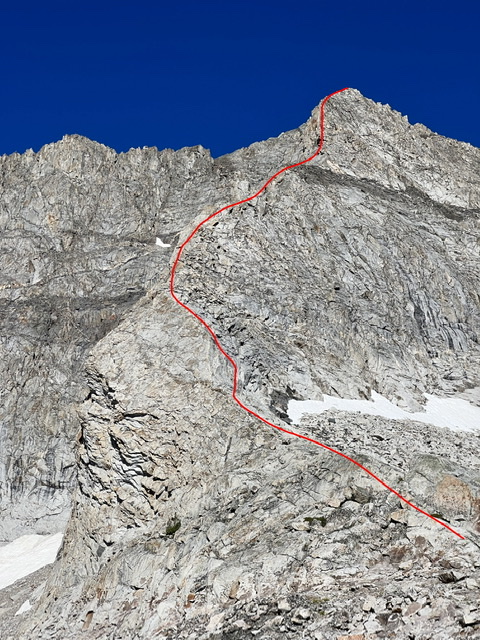 East Rib from the base of the route. The lower crux can be seen in this photo. Derek Percoski Photo 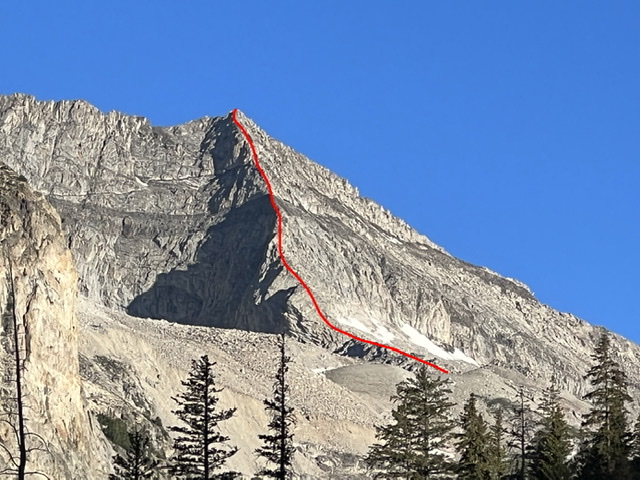 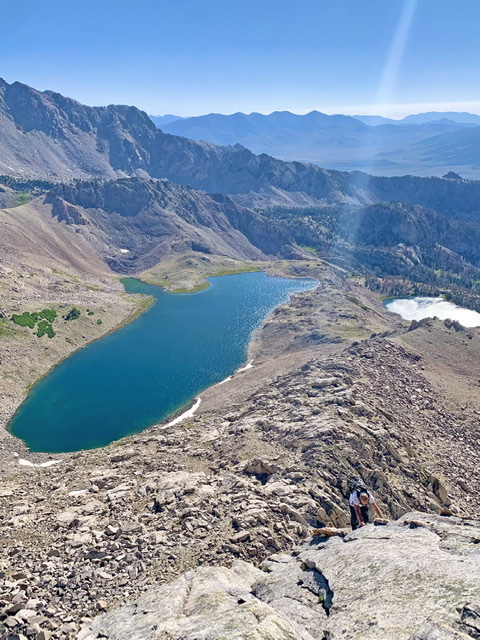 Derek Percoski halfway up the crux, at the base of the East Rib. Taylor Amato Photo 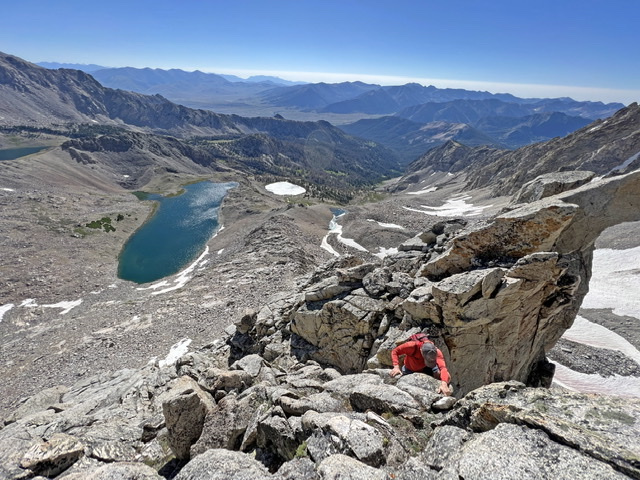 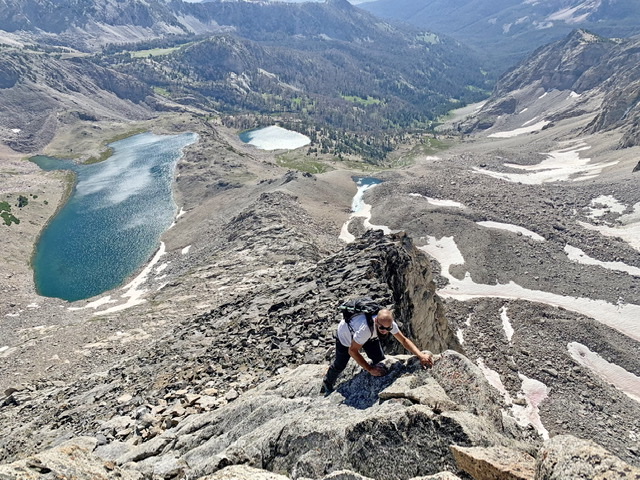 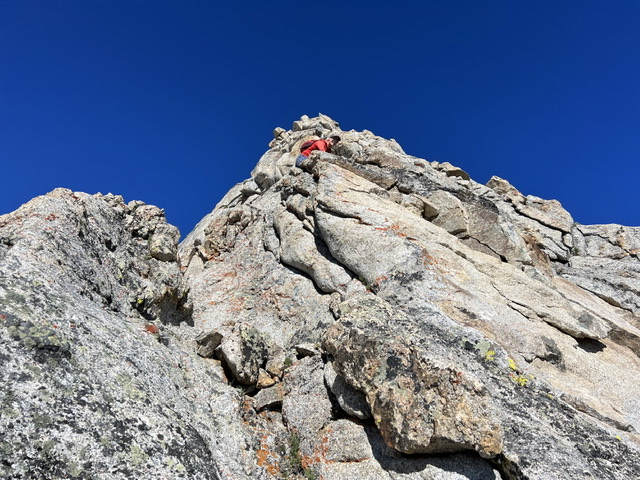 Access this route by taking the Broad Canyon trail to Baptie Lake (or you could keep going to Goat Lake). The east ridge starts between those two lakes. The crux comes right away—so if you don’t like what you see you can abort and climb the classic north ridge route instead. 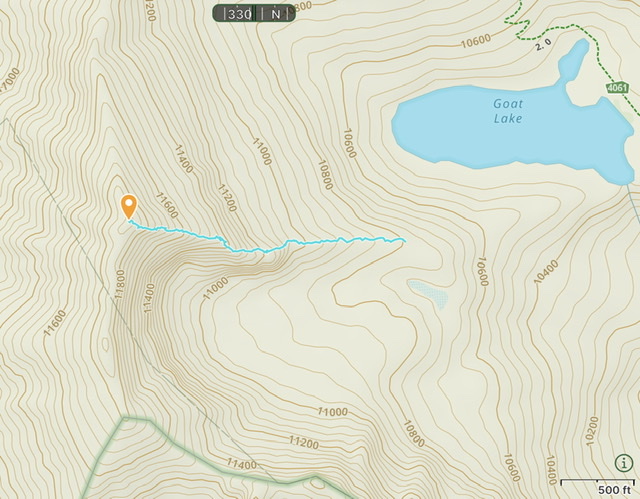 Derek’s GPS track for the climb recorded. 1,104 of elevation gain while on the rib. 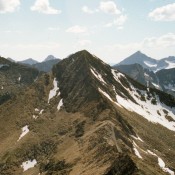