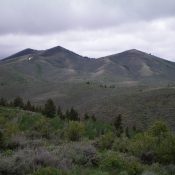 Peak 6910 is the highest of three ranked summits in the hill country south of Rattlesnake Peak. This area has numerous gullies/drainages, ridges, old roads and cattle trails. The bushwhacking in the gullies/drainages can be very difficult. While cattle roam this country now, miners staked their claims here many years ago. The easiest ascent route is via FST-364 (an ATV trail) from the west side of Rattlesnake Peak and the east face or northeast ridge. USGS Wakley Peak 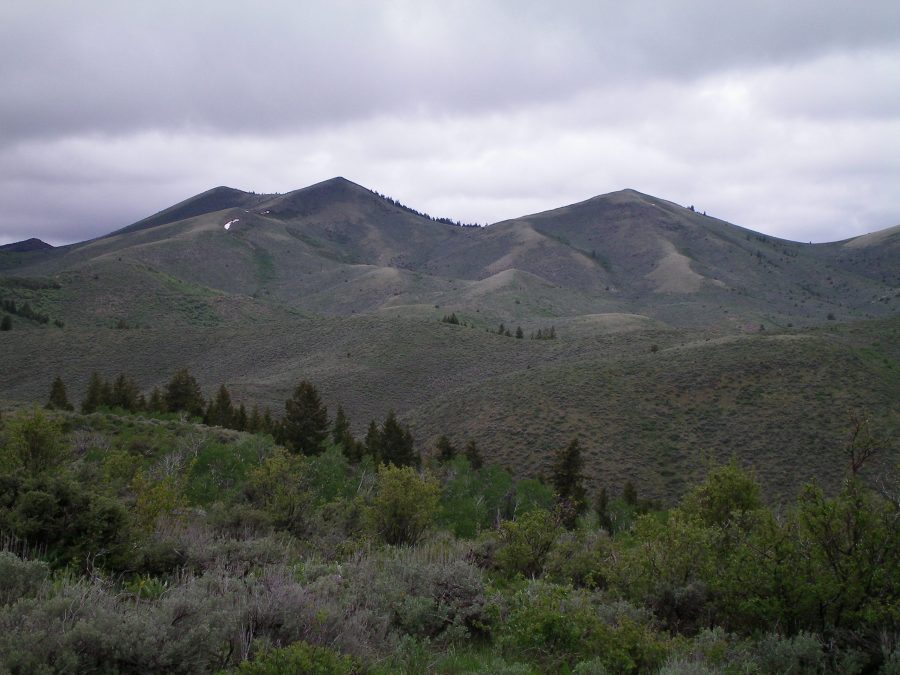 The undulating ridge line of Peak 6910. The double-humped summit is just left of center. The left/west summit is the high point. Livingston Douglas Photo

The USGS topo map has numerous errors with respect to existing roads, old roads, and helpful trails in this area. Be ready for a challenging adventure if you tackle these three peaks in a single day (Peak 6840, Peak 6910, and Peak 6708). The ridge traverse between these peaks is very time-consuming. If you add nearby Rattlesnake Peak to the agenda, you can bag four ranked summits in a single day.

This climb begins at the base of the north spur of Peak 6840 in the South Fork Hawkins Creek drainage at a meadow. When you reach the drainage, follow a cattle trail west to another meadow (cattle cistern here). If you continue southwest on the cattle trail, you will soon reach private property, fencing, and signage prohibiting entry, forcing you to return to this meadow. From the meadow, bushwhack north to cross a minor hump. Drop west to pick up a good cattle trail that shows up on the USGS topo map as a dashed line.

This cattle trail skirts the upper end of another drainage and proceeds northward over a minor ridge. It then drops north to yet another drainage. This is the third and final drainage to cross. At this drainage, the cattle trail reaches a “T” junction with another cattle trail that follows the center of the dry drainage. Go left/west onto this cattle trail and follow it briefly until it bends left/southwest. Leave the trail here and bushwhack northwest through steep, thick brush to reach the crest of the south ridge.

Follow the south ridge a short distance to reach the east summit. From here, follow the summit ridge west to reach the true/west summit. This summit is open and has a cairn on the high point. From here, the route to the top of nearby Peak 6708 is clear. That peak is about ¾ mile away on mostly open terrain. 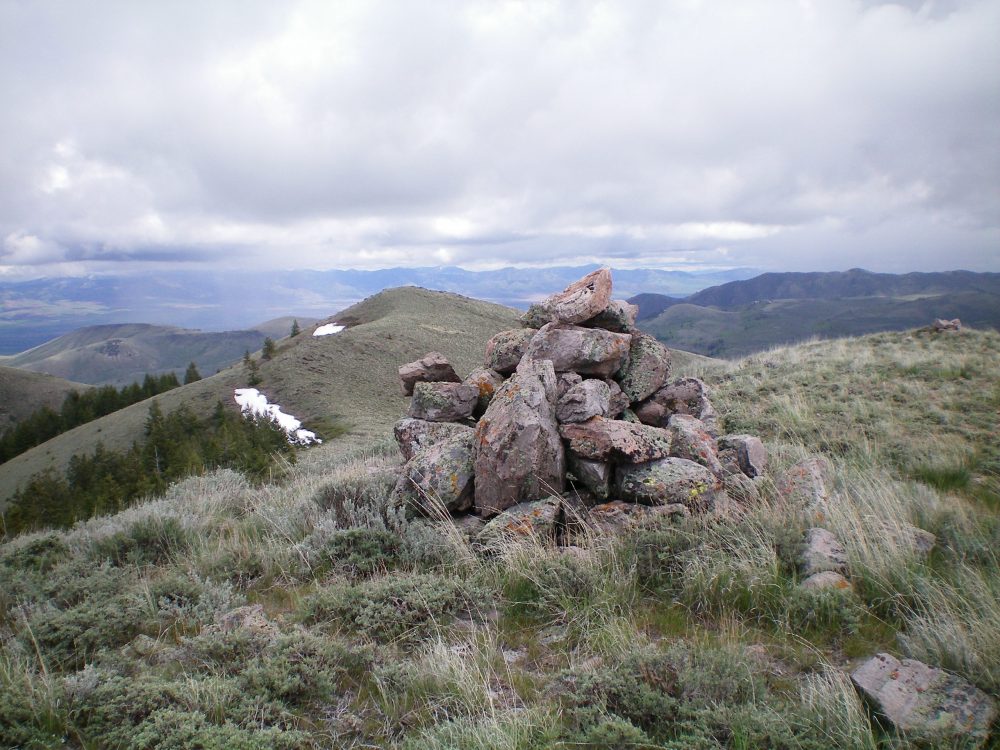 The summit cairn atop Peak 6910. The [lower] east summit is in the background. Livingston Douglas Photo

This route is part of a ridge traverse from Peak 6910 to Peak 6708. From the west summit of Peak 6910, descend the steep west face down to an obvious saddle. An old jeep road passes through this saddle. You must leave National Forest Land as you approach the saddle and cross a cattle fence onto private property. Be sure to obtain written permission from the landowner before completing this route. The terrain on the west face is mostly scrub but there is a section of steep, loose talus that is challenging and goes at Class 2+/3, so be careful in that area.

Same as for the south ridge. This route is the final leg of a loop route that returns to FSR-039/South Fork Road.

From the west summit, return to the east summit then descend east to a saddle (Class 2+ talus). From the saddle, angle east onto a shoulder that is heading southeast. Follow this shoulder down to a drainage. Find a good cattle trail here and follow it northeast down the drainage to an old 2-track jeep road (“JJ Road” on the USGS topo map). Follow this jeep track northeast then north as it stays just left/west of a private property fence line.

When the road reaches a flat area on the south side of Rattlesnake Peak, leave the road to bushwhack east down through thick sagebrush (crossing a cattle fence on the way). Descend to a nice meadow and cruise down a short section of FSR-037 to reach the gated closure and your parked vehicle. Yes, unless you skirt it, there is a VERY SHORT section of roadway on private land as you finish this hike.