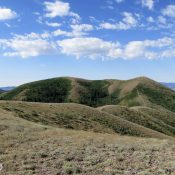 Peak 7140 sits south of Pocatello in the Bannock Range, barely a mile southwest of Rock Knoll. There a few ways to climb obscure Peak 7140, but one of those is not from the west which is Shoshone-Bannock Reservation land. USGS Michaud Creek 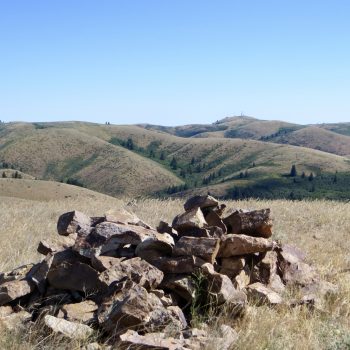 The s cairn atop Peak 7140. Kinport Peak is in the background. Steve Mandella Photo

Peak 7140 can be reached by extending your climb of Rock Knoll via the Gibson Jack Trail approach in a long day hike. You will encounter some steep bushwhacking and elevation loss on the west side of Rock Knoll in doing so. Crossing Midnight Creek might be challenging in early season especially after a snowy Winter.

Begin at Lower Kinport Peak Road (which runs parallel to City Creek) and ascend until you reach Upper Kinport Peak Road. We used an FJ Cruiser to crawl up the dicey, rutted, steep, rocky Upper Kinport Peak Road to the saddle southwest of Kinport Peak. We then traveled the better quality trail west and south, past Horse Lake (more of a higher elevation swamp that is easily missed), until we reached a point north of the peak and parked. From here, it’s a short, steep hike to the lower summit on a clearly-defined ATV trail. Continue southeast to the official summit.

In spite of using the north approach, we can’t in good conscience recommend using Upper Kinport Road. Signs require a high-clearance 4WD, and because of the depth of ruts that get worse each year, a very high-clearance 4WD vehicle with a short wheel base or ATV/UTV is really what is necessary. The drive is still unnerving in a few spots. Additionally, if you do take a vehicle, plan to totally trash its paint, as there are aspens and thick brush along many sections of the road that will scratch the heck out of your vehicle.

We encountered one vehicle climbing, as we descended, and we were very lucky to be at a point where we could pull over. There are very few locations to pass and backing up on this road to one of them would not be fun. The jeep trail from the east out of the Johnny Creek area might be a better approach to a hiking start. However, I don’t personally have any experience or knowledge of that route. Whether you opt for a very long hike or a combo jeep/hike approach on designated trails, the peak is not an easy prize. However, the views from Peak 7140 of American Falls Reservoir, tribal lands, peaks of the Bannock Range and the surrounding Deep Creek and Portneuf Mountain Ranges are stellar. 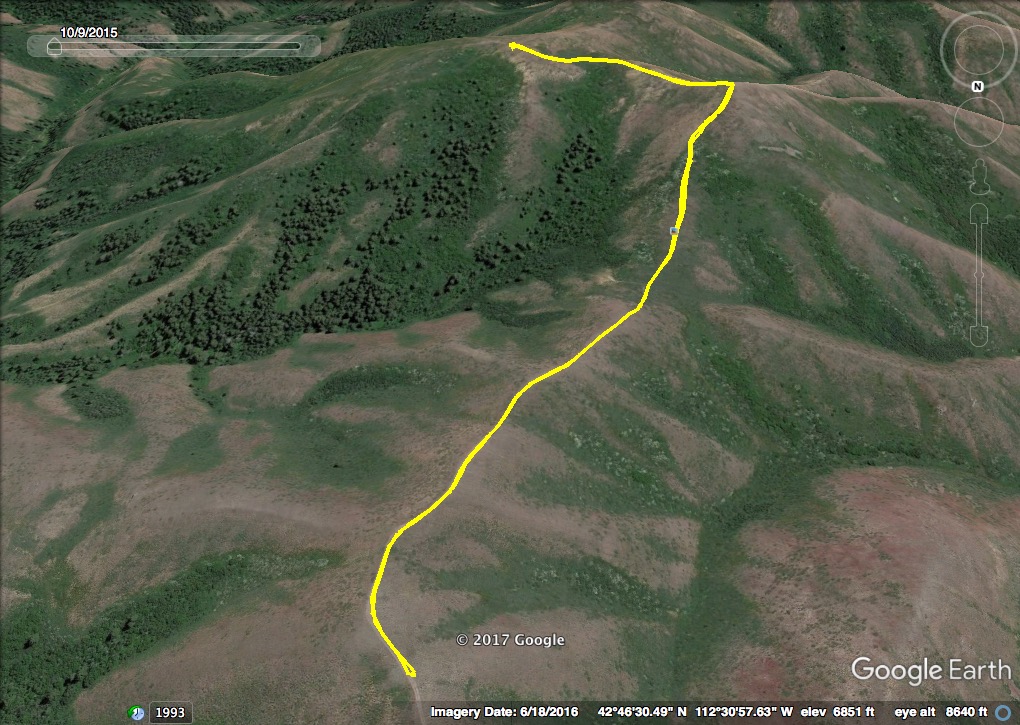