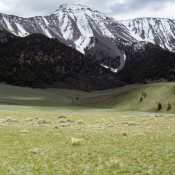 Climbing and access information for this peak is on Page 268 of the book. Three additional routes are set out below: (1) West Face, (2) South Face and (3) North Couloir. Updated June 2018

Petros Peak is one of the most attractive peaks in the Pahsimeroi portion of the Lost River Range when viewed from US-93. Climbing the peak from the west involves a long haul up talus-covered slopes to the peak’s ridge. The peak’s unique North Face is hidden from view unless you visit Christian Gulch [(C)(4) on Page 294]. By any measure, Petros Peak is one of Idaho’s most interesting mountains. USGS Grouse Creek Mountain 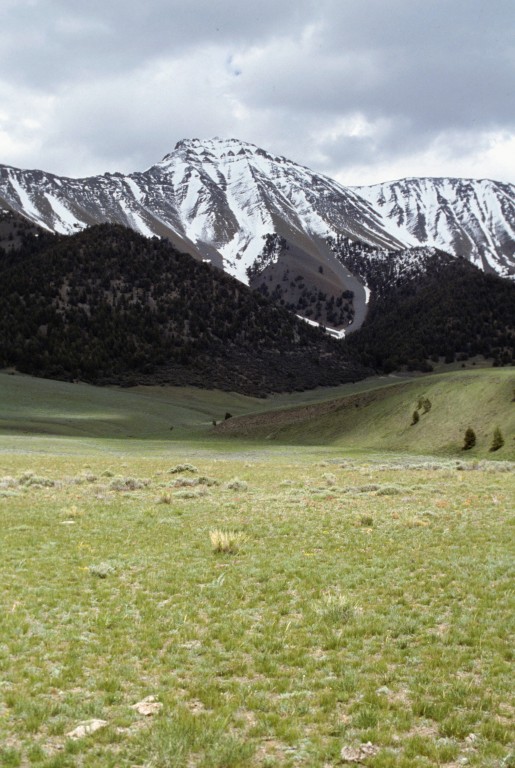 Petros Peak as viewed from the west. The West Face Route starts in the drainage to the right of center.

Scroll down for new route information on the peak’s South Face. 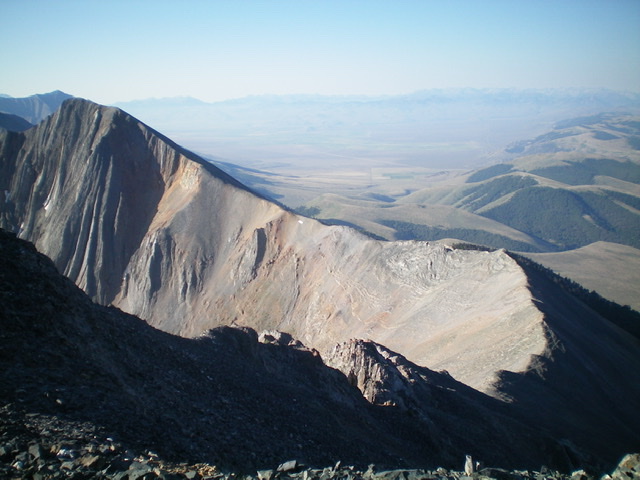 View of Petros Peak (summit is left of center) and its rugged northwest ridge from Pahsimeroi Pyramid.Livingston Douglas Photo 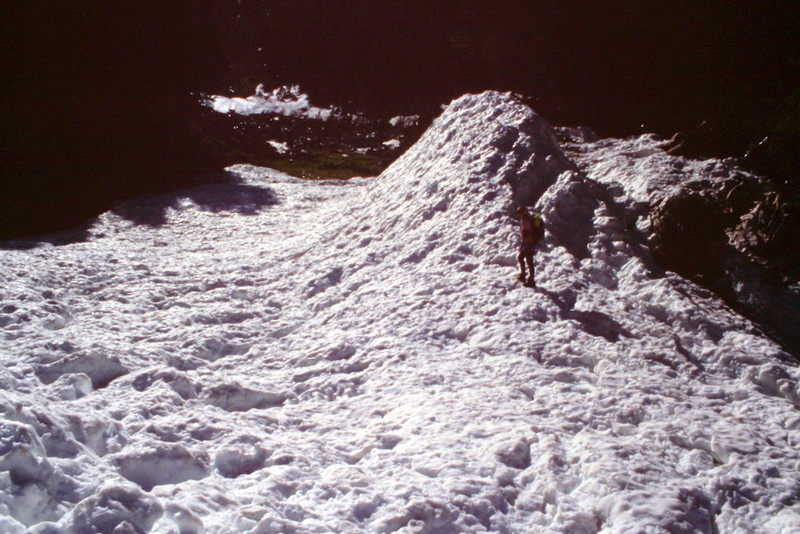 When I climbed the peak on 6/24/95, we found the remnants of a huge avalanche that had swept the face. As you climb up the West Face, you will see that it provides a tremendous area for snow to accumulate. 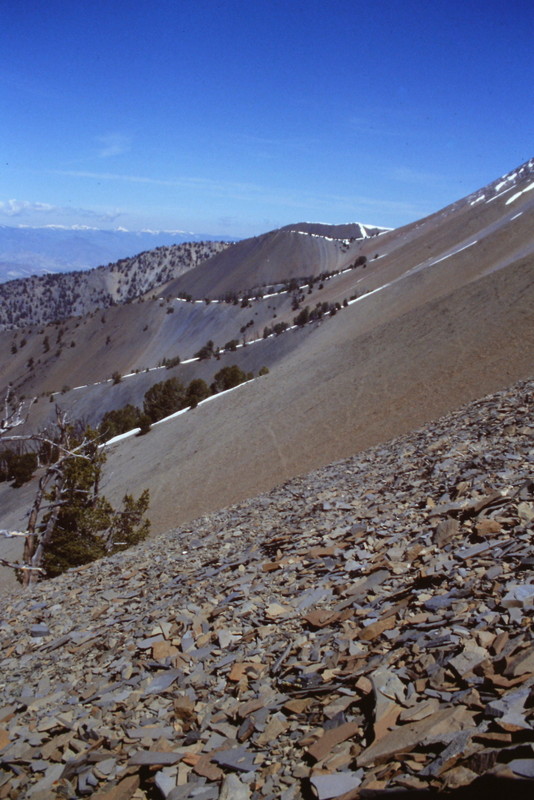 Once above treeline on the West Face Route, the view begins to open up and you can look north across the face of the range. 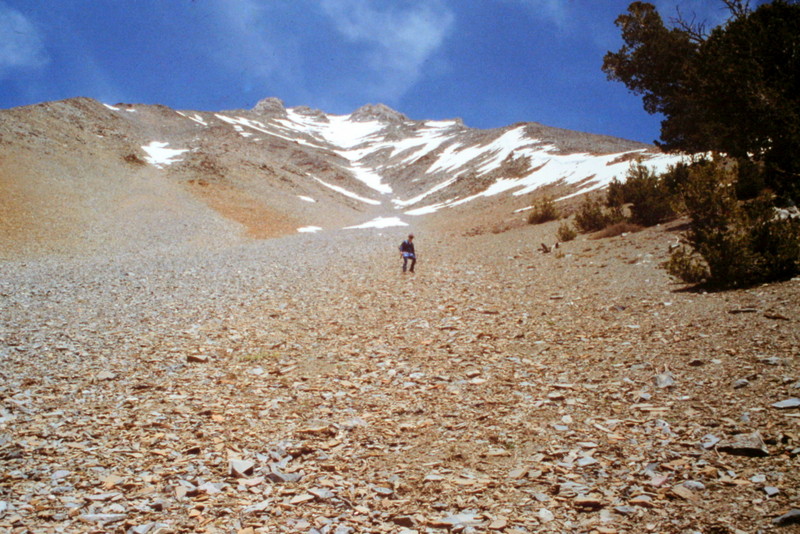 The higher you climb, the more talus you find. At this point, it is time to cross over the peak’s West Rib to the south. 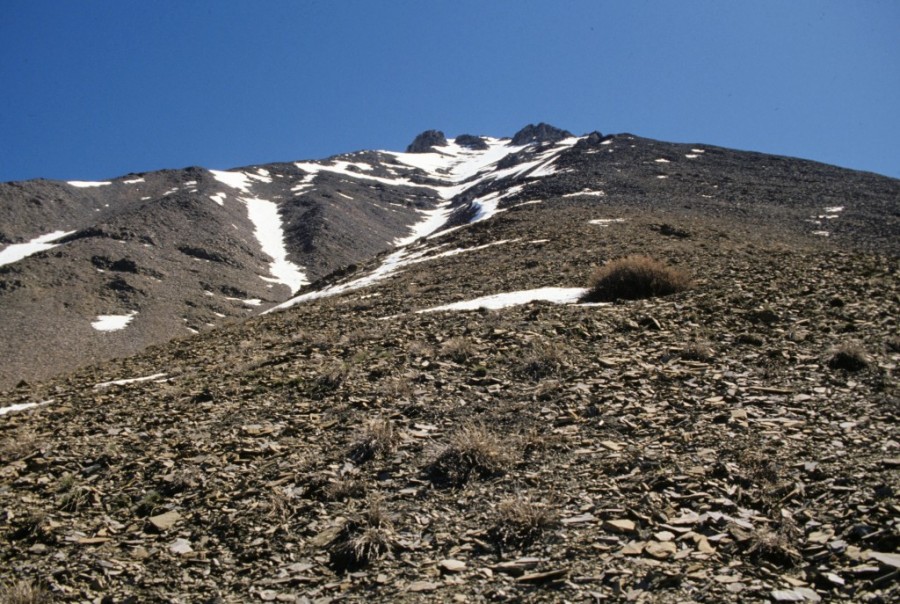 Looking up the West Rib of Petros Peak. 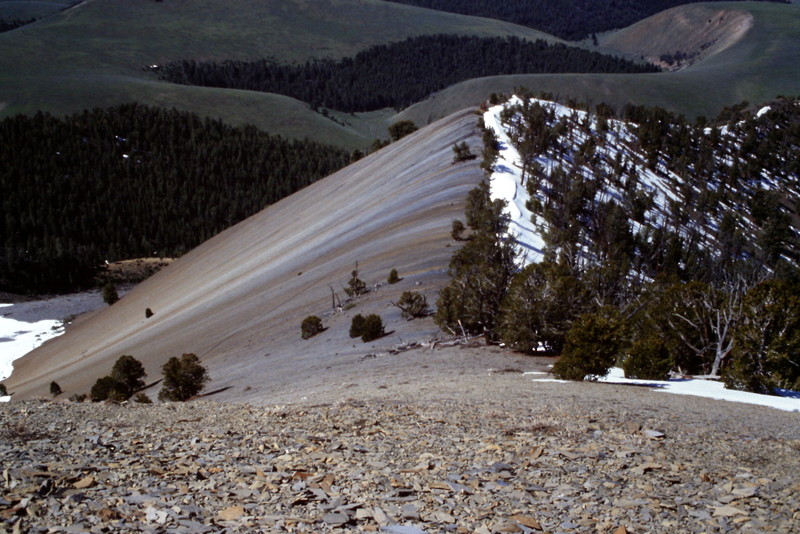 Looking back down the West Rib from midway up the face. 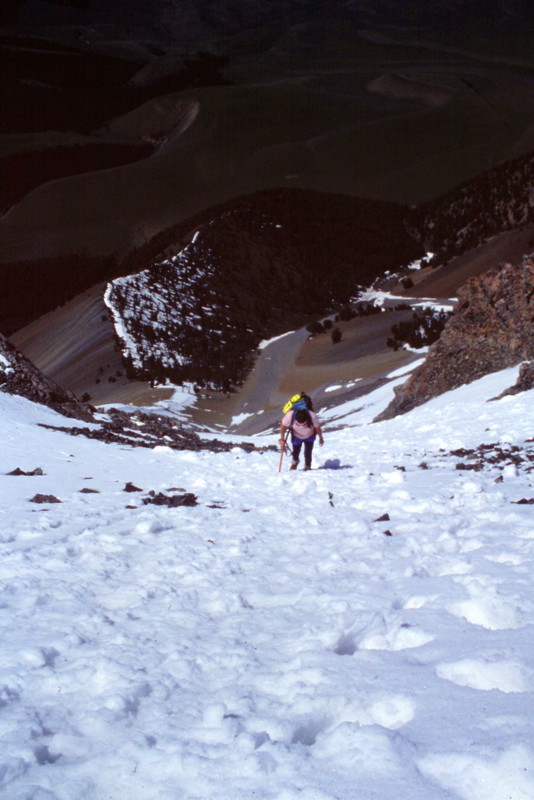 There was still a lot of snow in late June 1995. The snow was a welcome relief from the talus. 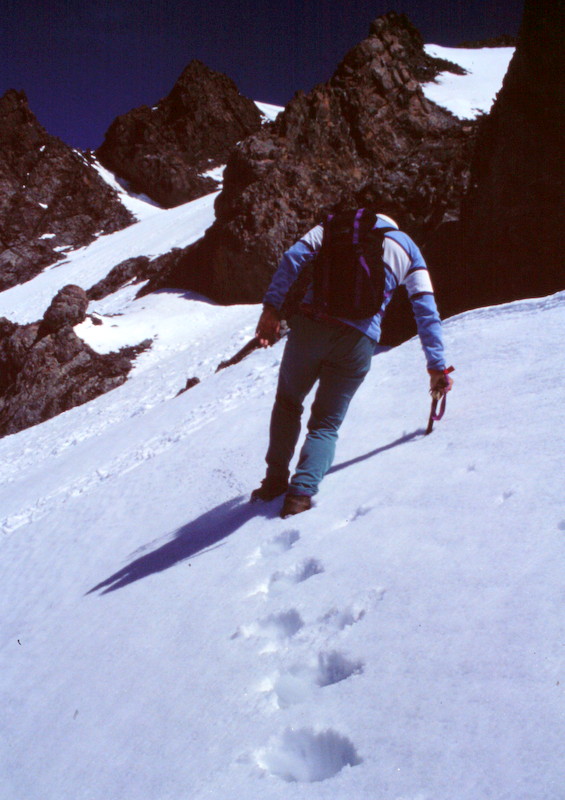 Once we had sufficient snow, we left the ridge and headed northeast toward the summit ridge. 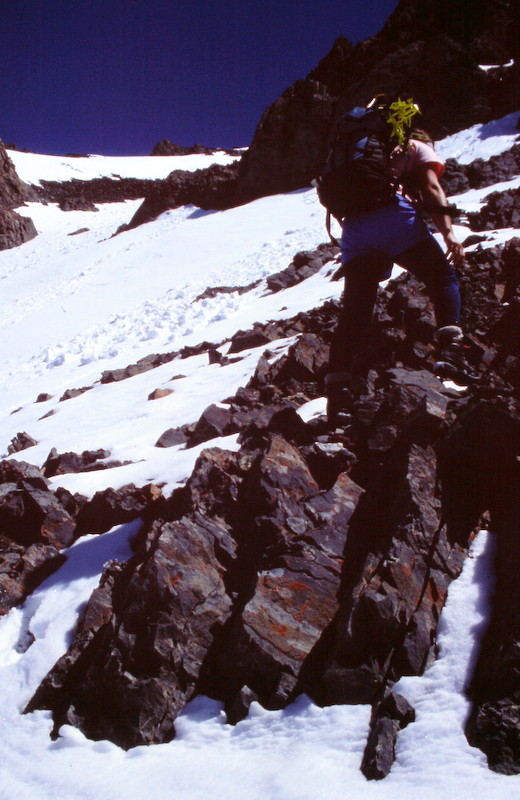 You will encounter a few small rock bands along the way. 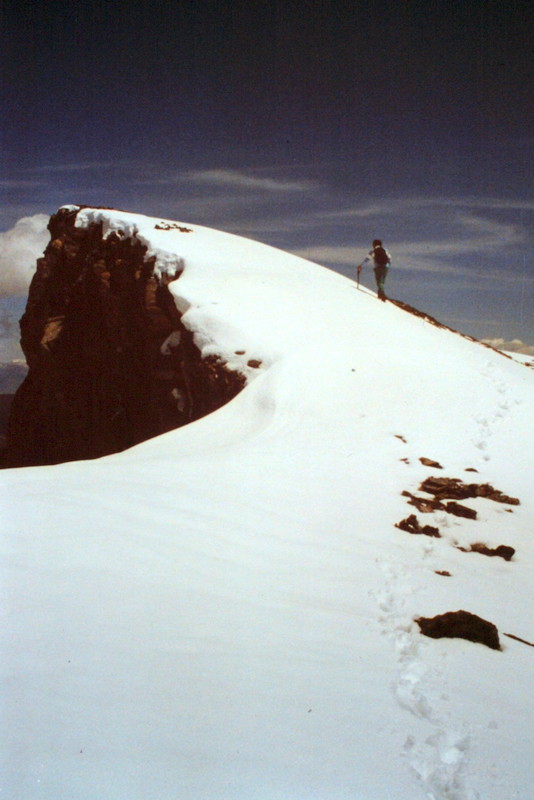 The final push to the top.

The peak’s North Face as viewed from Pahsimeroi Pyramid is accessed from Christian Gulch. Pat McGrane and Taylor Butters made the first ascent in June 2018. Pat’s trip report is set out below. 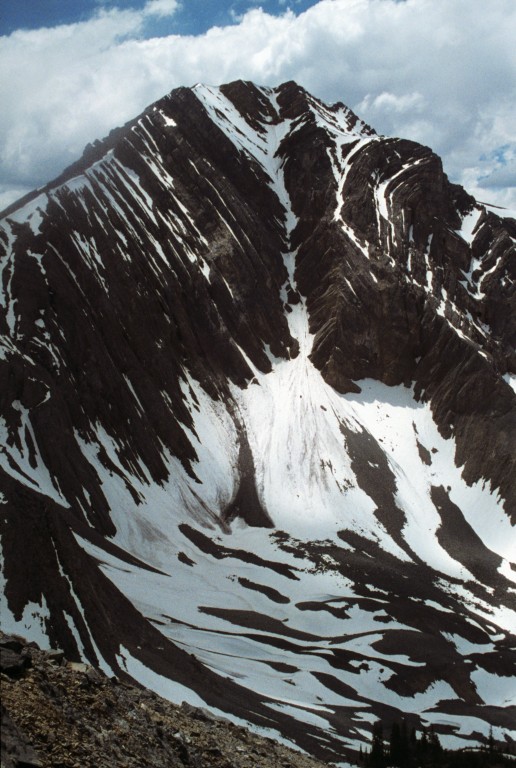 The North Face of Petros Peak as viewed from Christian Gulch.

See their article on the Missing Eleveners in the Climbing History Section of this site.

From the road up the South Fork of Christian Gulch [(C)(4)], continue walking up the drainage.  Follow the left/south fork to the base of the South Face and walk up the face to the summit on generally good footing. It is hard to imagine someone not accessing the summit from this direction in the past.

I have been waiting years for the right conditions to safely climb the North Couloir of Petros Peak. That’s because the couloir is very dangerous. Huge cornices form during the winter and overhang the entire North Face, the rock is shattered and very loose, and avalanches are possible much of the time. Anything that falls from the top can be funneled through a few narrow spots in the couloir below.

The conditions I was seeking included clear, stable weather and nighttime temperatures below freezing. The snow needed to be stable and hard. On June 2nd, conditions looked good, so Taylor Butters and I took advantage of it. We began hiking from Christian Gulch Road at 5:30AM.

It took us 2 hours to position ourselves below the North Couloir. The climb looked straightforward. There was snow from top to bottom with only two rocky constrictions which looked manageable. Taylor and I took a 30-meter, 7mm rope which initially stayed in the pack. We carried only 6 slings for protection. On routes like this one, which feature cornices and rock fall, there is a trade-off between speed and safety. Either you bring little gear, go fast and risk a long fall, or you bring more gear, go slower and risk getting hit by a rock. We chose the former.

We climbed unroped for the entire route except for one inspired pitch which Taylor led on rotten rock with no protection. Small rocks shot past us a few times but, for the most part, the rockfall was well-behaved. The couloir remained in the shade and the temperature was below freezing for our entire climb. We lucked out.

The crux pitch bypassed 2 small waterfalls that blocked the couloir at mid-height. Taylor led across a near-vertical face of shattered rock for a full 30-meter rope length. We climbed the rock in crampons with our ice axes stowed. It was an inspired lead. The rock section was perhaps Class 5.5 in difficulty but, without any rock protection or snow pickets, we needed to simul-climb to reach a belay stance. The final half of the route was ever-steepening snow.

The couloir forked near the top. The left fork was slightly more direct, but was topped with huge cornices. The right fork was a steep snowfield (60 degrees near the top) but had no cornice on one end. We went right. It was with great relief that we topped out at 10:30AM, 5 hours after leaving the car. The sun was just beginning to hit the face.

After a few minutes on top, we started down the Northwest Ridge towards Pahsimeroi Pyramid. We originally thought we might climb that peak too. The descent of Petros Peak was more difficult than anticipated with mixed rock and snow. Eventually we made it to the saddle, but found a cornice running the entire length. There was no easy way down to Christian Gulch. The temperature was getting warm and the cornice had a large crack on its uphill side. It looked like it might fail at any time.

We considered heading west to US-93 and hitch-hiking back to Christian Gulch, but decided to rope up, lower off the cornice and down-climb to safety as quickly as possible. It was with great relief that we reached the valley floor. The North Couloir was a very satisfying climb, steep and scary. It is dangerous due to exposure to rockfall, cornices, and avalanches. Don’t take it lightly. In hindsight, I would plan the descent differently. I would explore descending Petros’ South or West Sides and hook around nearby Pavlos Peak to reach Christian Gulch. That descent route may be safer. 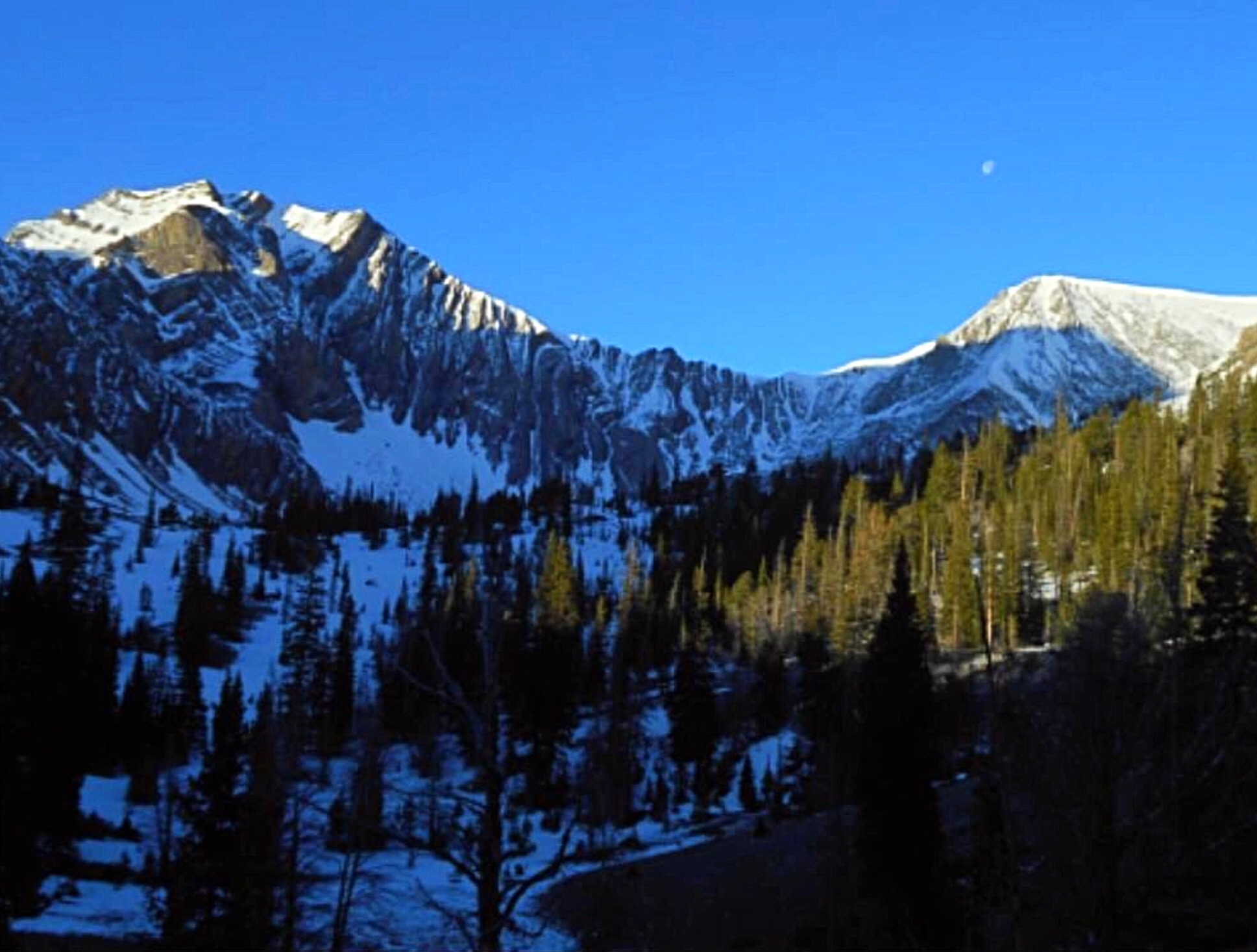 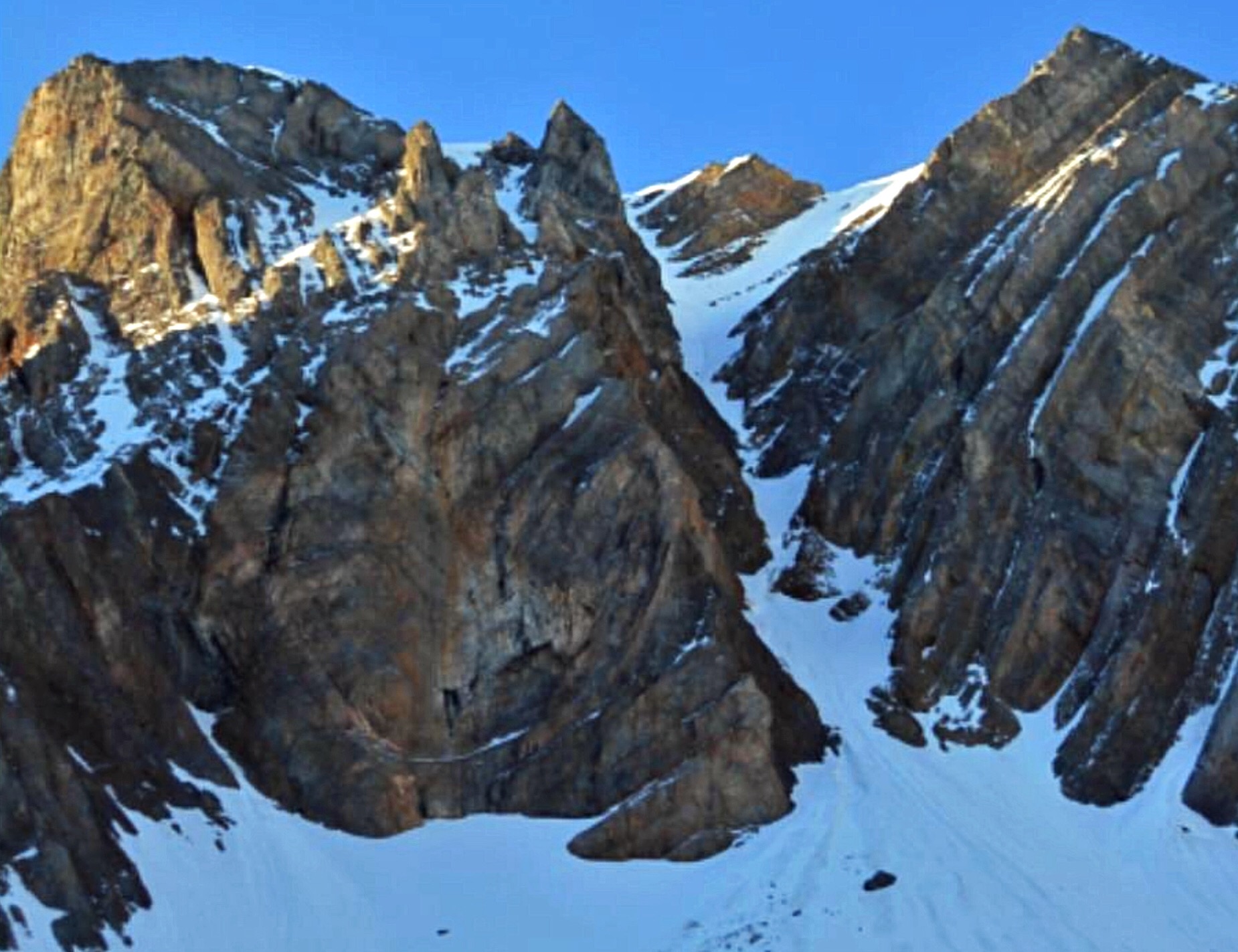 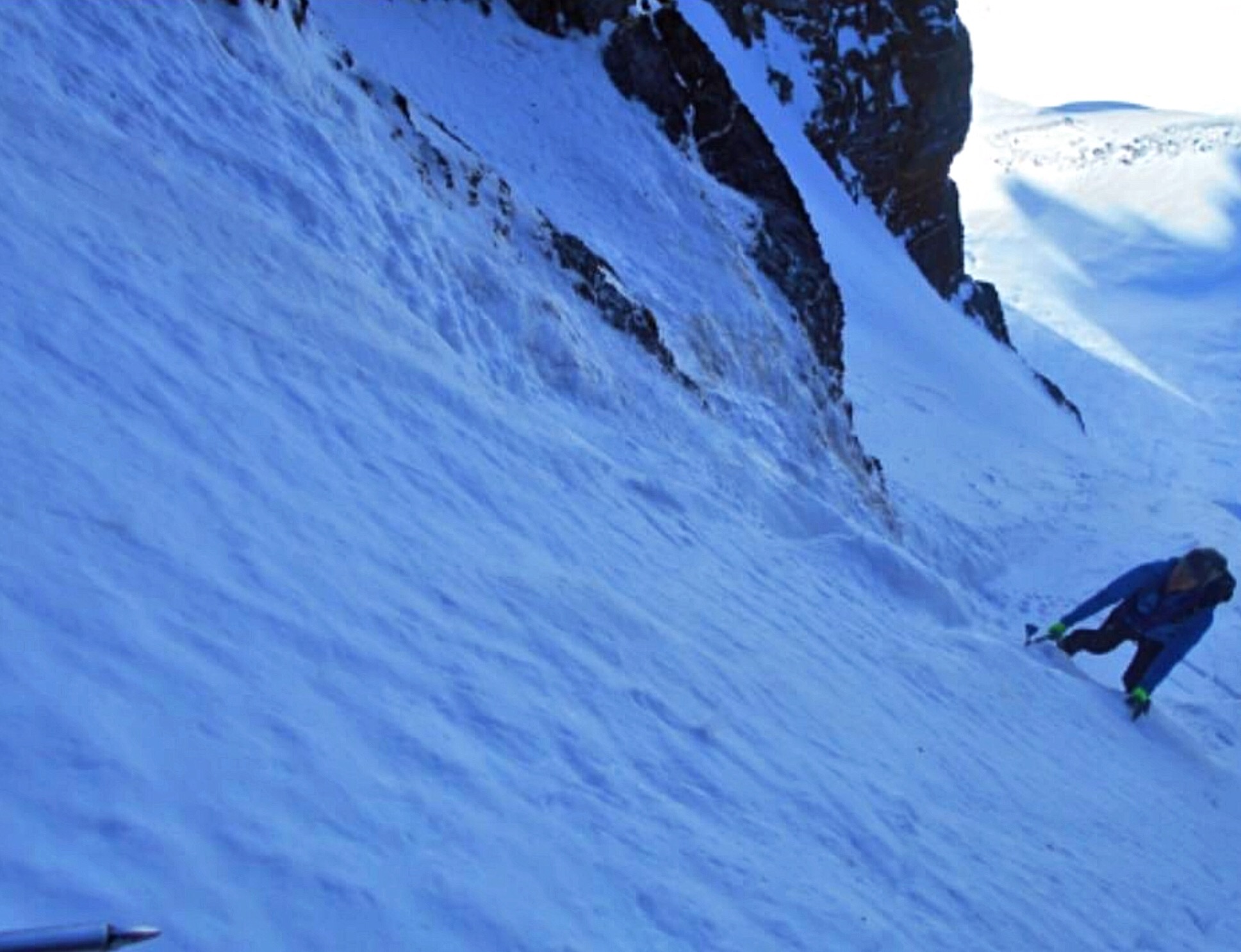 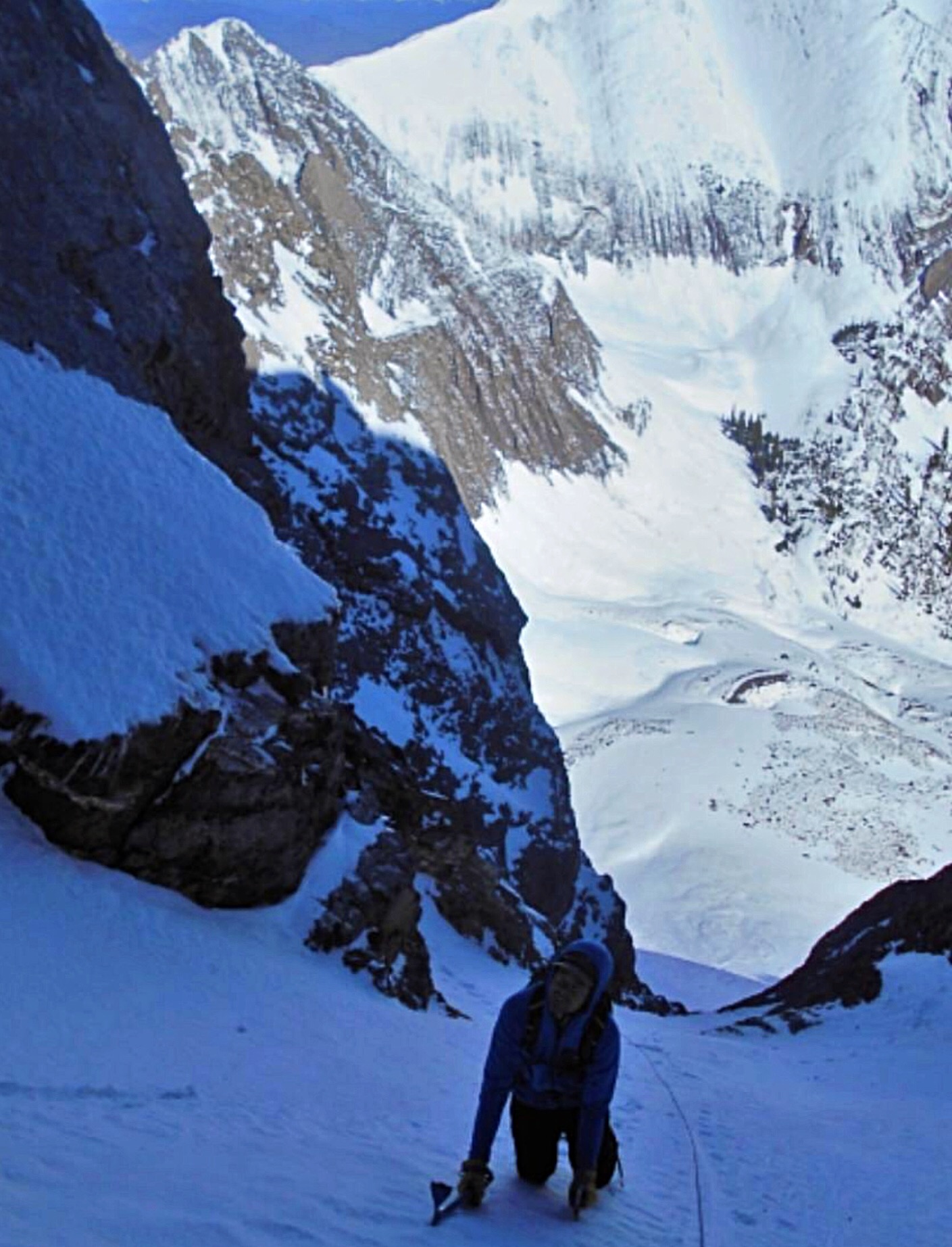 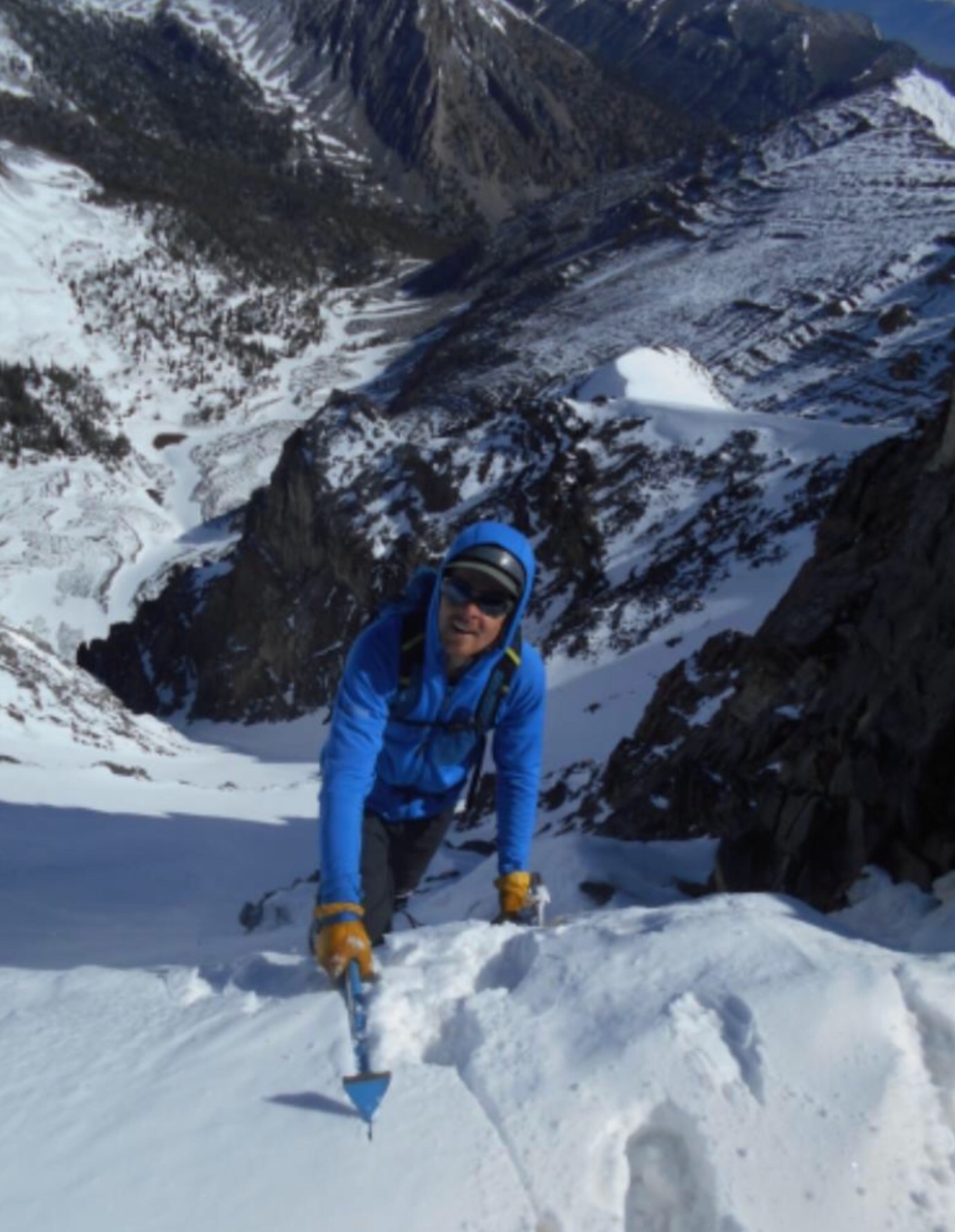 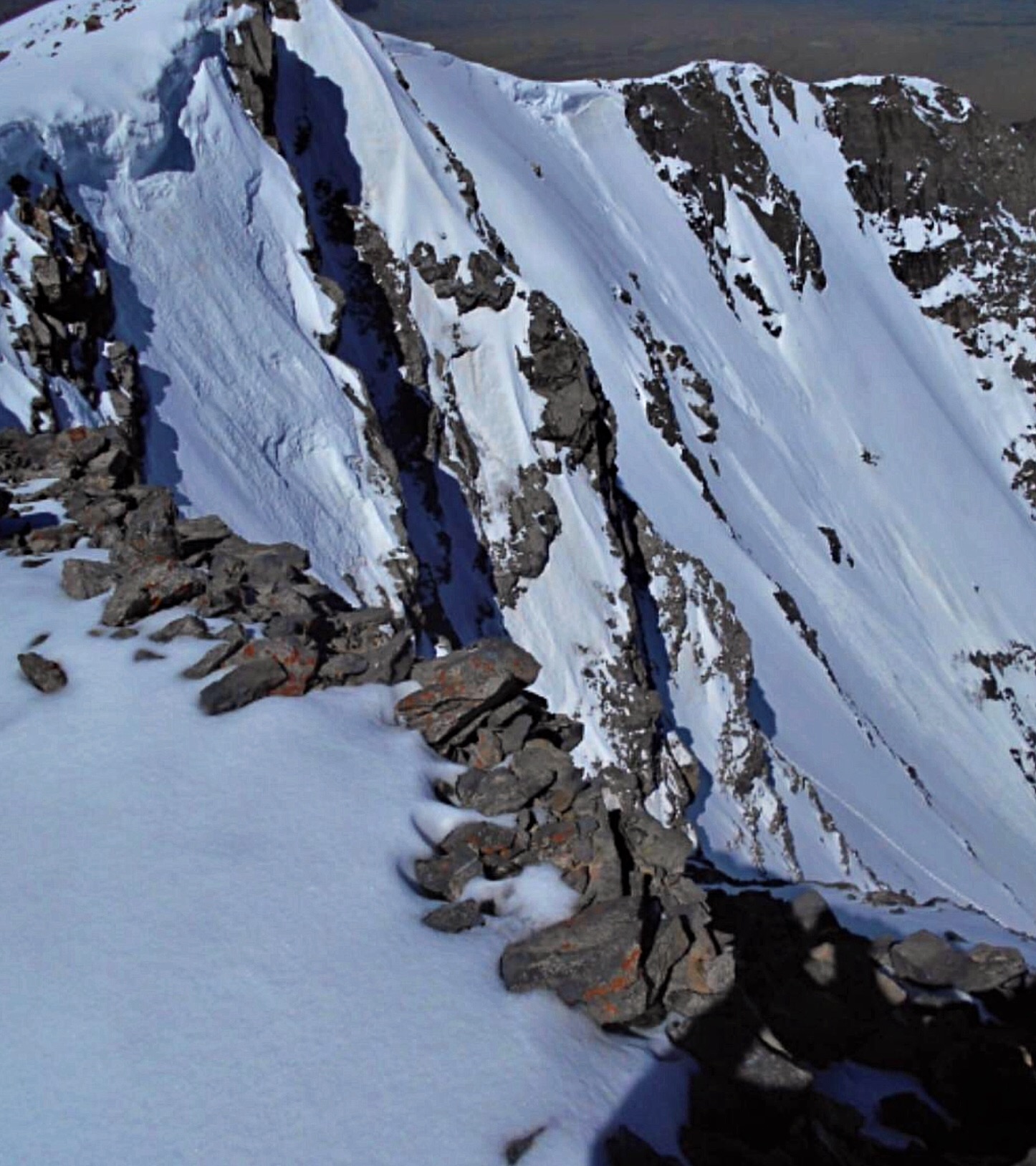 The North Face coming into the sunshine. Our tracks can be seen in the lower right. Pat McGrane Photo 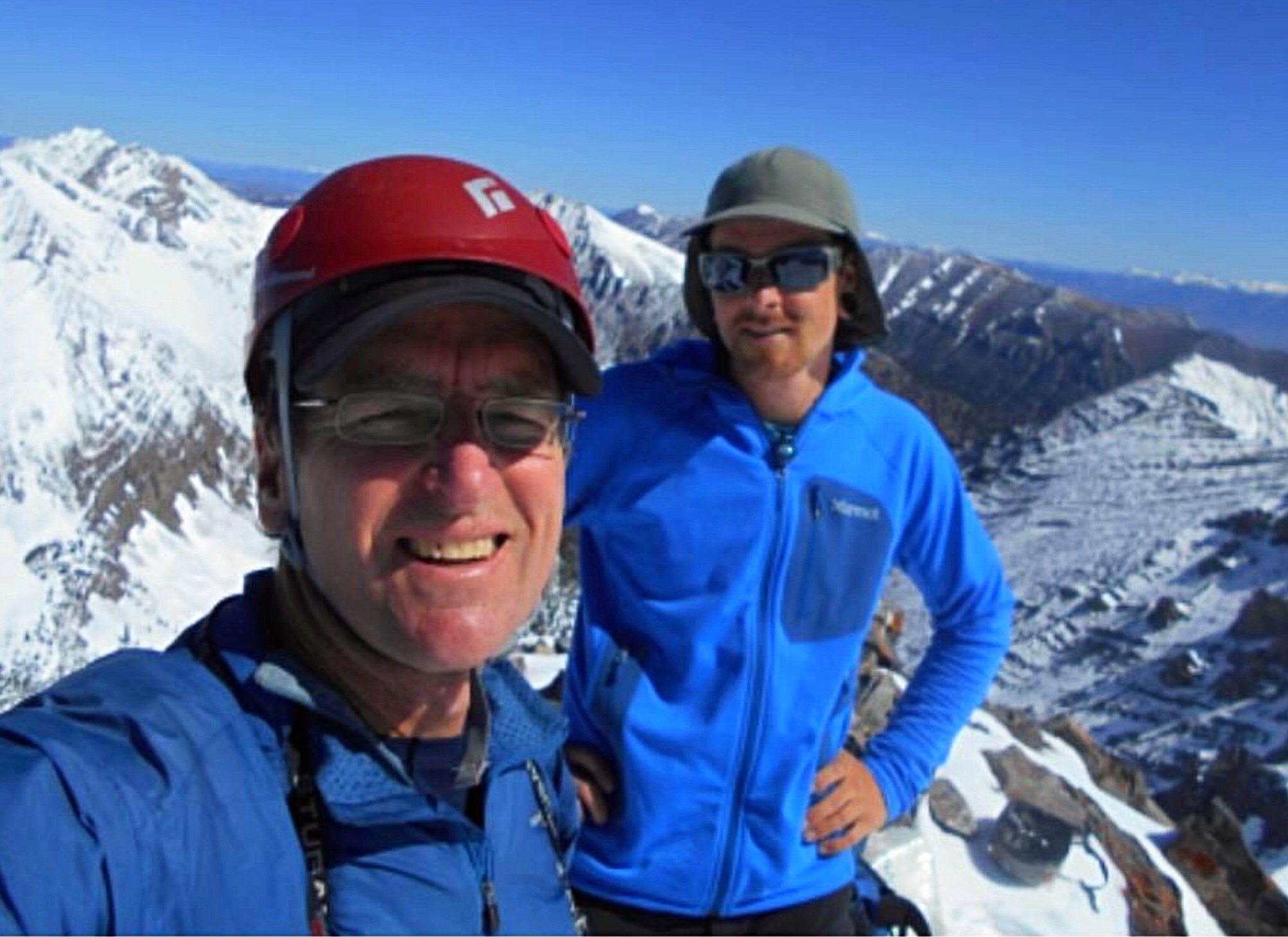 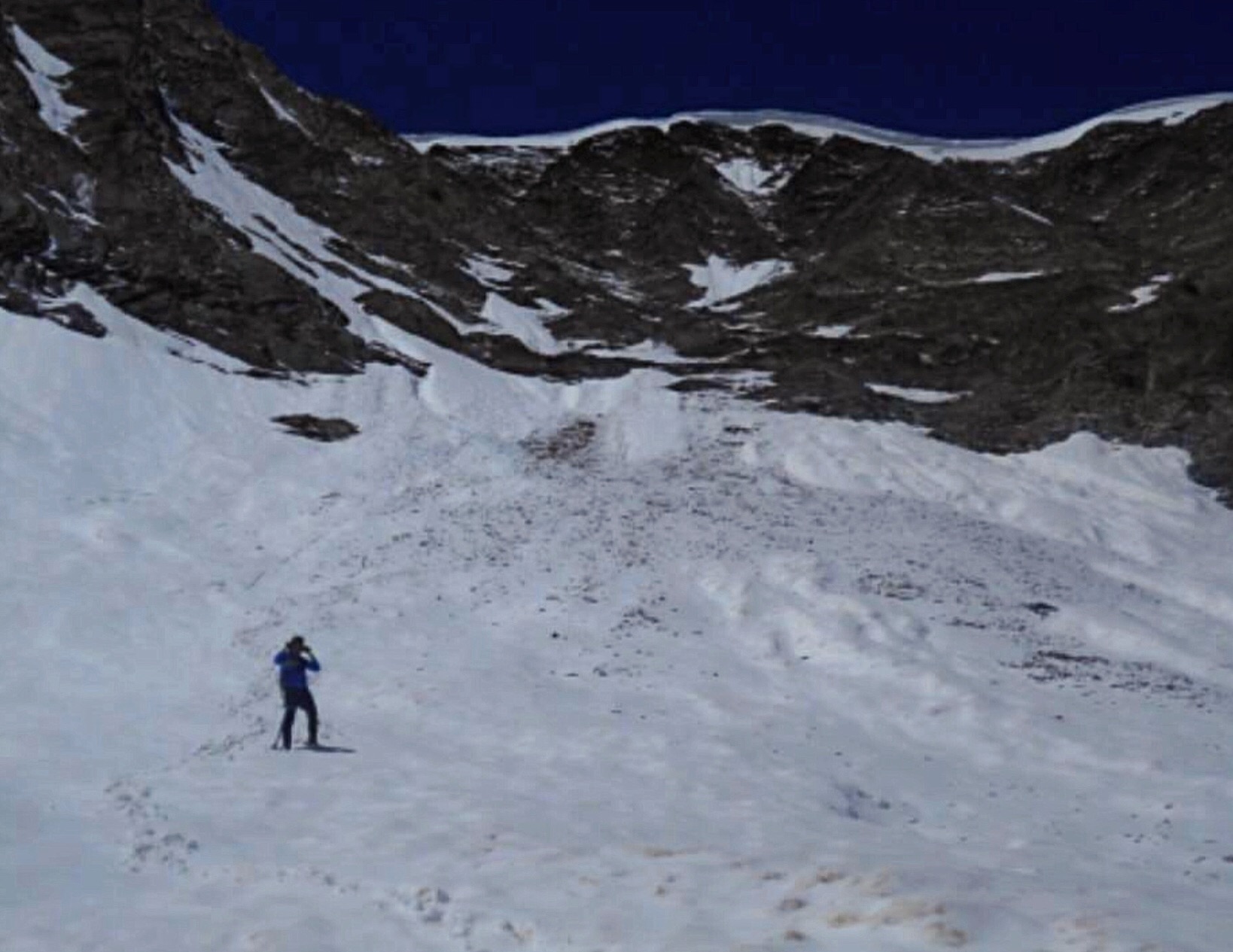 Taylor Butters below the cornice on the Petros Peak/Pahsimeroi Pyramid saddle after a quick descent. Pat McGrane Photo 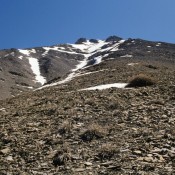 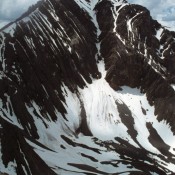