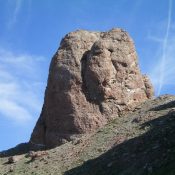 This formation is not in the book. The Lists of John elevation and coordinates are for nearby Point 9787 rather than for the named formation which is situated farther west. It is likely that the formation is unclimbed. Published December 2020

The Thumb is a rocky protrusion on the Continental Divide just west of Peak 9900/The Knuckle. This 40-foot chunk of dubious rock is a Class 5 endeavor to reach the summit perch. It is the final peak of a three-peak journey that includes Peak 9284, Peak 9900/The Knuckle, and The Thumb (9,760 feet). I did not climb the final Class 5 section of this peak because saw no way to safely scramble to the top without a rope and I did not like the look of the rock quality and the minimal holds it offers. USGS Edie Creek 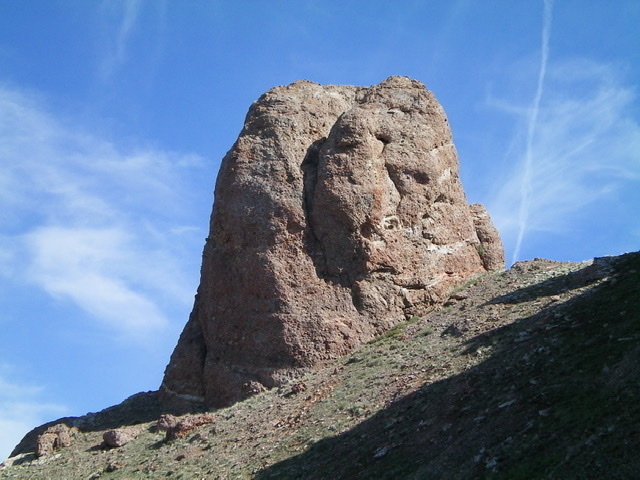 The south face of The Thumb. Livingston Douglas Photo

Same as for Peak 9284. This is the final leg of a three-peak adventure.

From the narrow, 9,580-foot connecting saddle with The Knuckle, climb west along the ridge crest up a steep, 170 vertical-foot section of Class 3 face rock with good holds to reach the top of Point 9787. There is a cairn atop this point. Continue west on the ridge crest on easy terrain to approach The Thumb. When the ridge turns right/north-northwest, it becomes a series of crumbly, exposed towers with dubious rock quality. Downclimb the final tower on steep ledges and a gully on its left/west side to reach the notch at the base of the east face of The Thumb.

Like Michael Darcy, I investigated the east side, south side, and north side of The Thumb to find the easiest route to the top. Based on what I saw, the east side probably holds the most promise. Contrary to Darcy, I found the upper north face to be overhanging and quite a challenge, though the starting point for that final climb is higher than the starting points for the east and south sides.

From the base of east face of The Thumb, move to the south side of The Thumb and traverse below the ridge towers and descend about 150 vertical feet then scramble up a scrub face to cross a lateral shoulder and then traverse east to reach the south ridge. This route avoids any climbing of the gnarly ridge towers. The south ridge emanates from a mid-point between The Thumb and Point 9787. It is a magnificent ridge and is easy to find.

The south ridge is a mix of open scrub/scree (high up), a rocky ridge line with ridge trees (mid-section), and easy but thick pine forest (low). The base of the south ridge is in a beautiful meadow where a weak 2-track jeep road (FSR-193) exists, just over 0.5 miles up from the National Forest boundary. 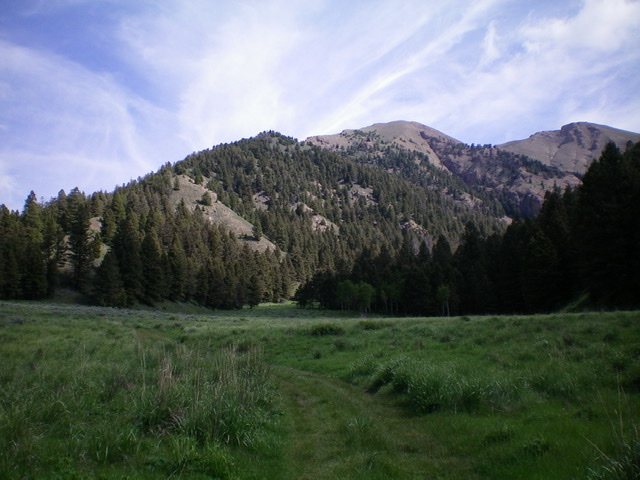 The south ridge of The Thumb (the skyline to the left) as viewed from the beautiful meadow in the Bull Pen drainage at 7,737 feet. Livingston Douglas Photo 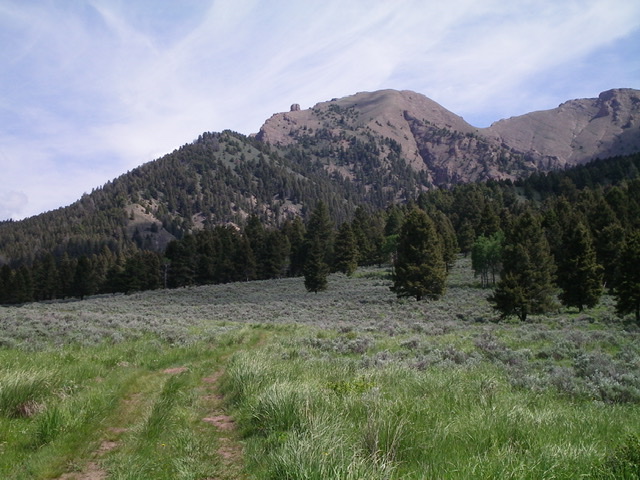 The lower part of the south ridge of The Thumb (lower left diagonally to upper right). Livingston Douglas Photo 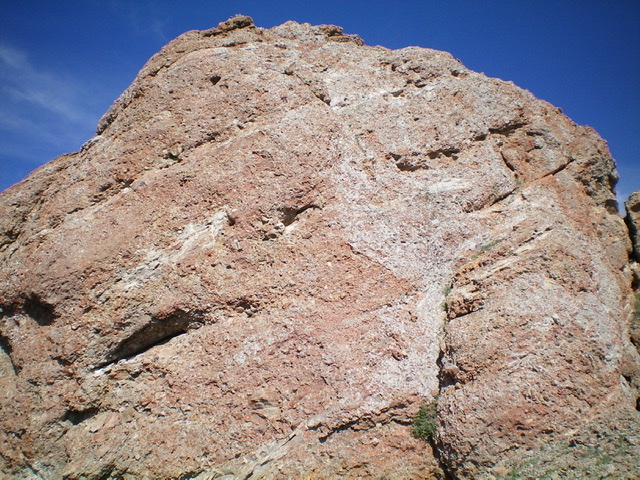 The east face of The Thumb as viewed from its base. 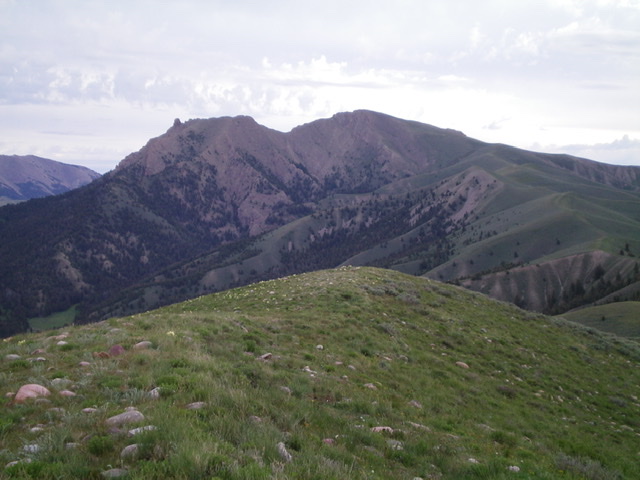 The gentle summit of Horse Mountain with The Thumb (rocky protrusion at far left) and Peak 9900/The Knuckle (the hump in dead center) in the background. Point 9787 is the flattish ridge just to the right of The Thumb. Livingston Douglas Photo