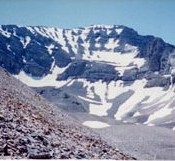 Climbing and access information for this peak is on Page 284 of the book. Livingston Douglas has provided detailed route information (below) for his first recorded ascent of the Upper Cedar Creek/Southwest Couloir.

USGS Peak, unofficially named in honor of all USGS surveyors, is a mighty peak protected on all sides by steep walls and in many places by towering cliffs. It is the 10th-highest Idaho summit. The summit is not easily spotted from the valley. Mount McCaleb blocks views of the peak from US-93, Mackay, and Massacre Mountain. Ross Peak and Octoberfest Peak block viewing it from the Little Lost River Valley. USGS Peak is #2 on my list of favorite Idaho climbs.

I believe that surveyors made the first ascent of the peak. Rick Baugher made an ascent in 1992. Rick’s trip report linked below contains an interesting history discussion. Dana Hansen and I made the first ascent of the peak’s North Face. See the North Face USGS article in the Climbing History section of this site. John Platt and Dave Pahlas climbed a North Face Variation in 2012. Use the links below to read their trip reports.

No one has climbed the peak’s North Ridge. The ridge is blocked by cliffs. There may be a way through the cliff band. Basil Service, Dana Hansen and I were chased off the ridge in 1993 by a thunderstorm. Livingston Douglas climbed the peak’s Southwest Couloir Route from Upper Cedar Creek in 2009. USGS Massacre Mountain USGS is a rugged mountain from every angle. This is the view from Mount McCaleb. 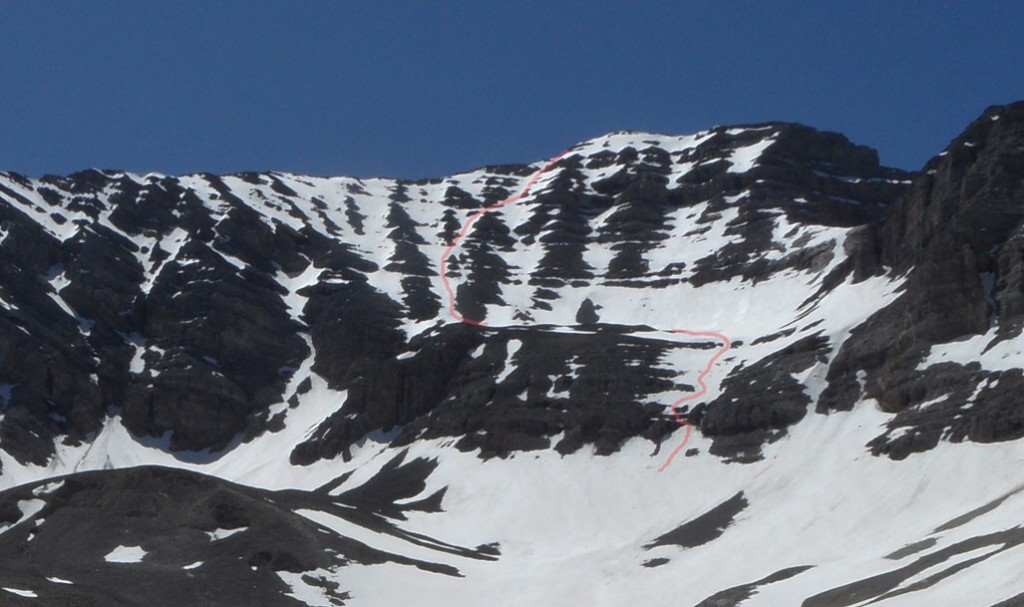 Hike up the unmaintained Upper Cedar Creek Trail, fording Upper Cedar Creek twice almost immediately. Follow the narrow, overgrown trail upstream, making one final crossing back to the right/SE side of the creek on a log. Leave the trail at a prominent triple-fork in the creek at 7,850 feet. Bushwhack up the east branch of Cedar Creek, staying on its south side and climbing well above the stream itself to avoid blowdown problems. Drop into the creek drainage proper at treeline (8,400 feet) and scramble up boulders and glacial talus in the dry stream bed to gain over 1,000 feet in elevation. This is a punishing task, not some simple “boulder-hop”.

It’s takes four grueling hours to get to this point (9,450 feet), but this is what you’ve been waiting for. You are now standing below the base of the Southwest Couloir of USGS Peak. The mountain towers over you and you’re hoping that this steep couloir doesn’t decide to block you with impenetrable cliffs higher up. The couloir clearly leads all the way up to the South Ridge of the peak at a point just under the summit, just as the Massacre Mountain quadrangle suggests.

Leave the dry stream drainage and and scramble ENE up scree to reach the base of the Southwest Couloir. Climb up the couloir on scree and small talus, all of it horribly loose. You will probably be pelted with an occasional small rock cascading into the couloir from above. I know I was. You will encounter several branches in the couloir as you climb higher. Always select the right-hand branch to remain in the primary couloir. Higher up, the couloir opens up. Exit the couloir up onto the South Ridge via moderately steep, scree-covered ledges. It takes about 1-3/4 hours to climb the Southwest Couloir.

Once on the South Ridge, it’s a relatively straightforward 15-minute scramble up loose scree and small talus to the talus-covered perch that is the summit of USGS Peak. After an exhausting six hours of work, you are finally on top. The summit has two USGS benchmarks as well as triangulation debris scattered about. The views of several nearby rugged peaks are rewarding. 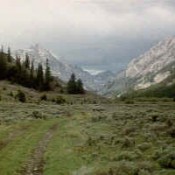 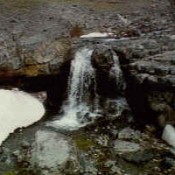 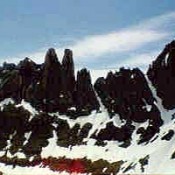 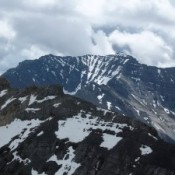