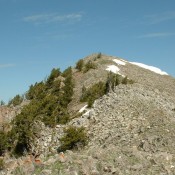 Climbing and access information for this peak is on Page 369 of the book. Ken Jones has provided an updated trip report for this peak which provides access information for an approach from Wyoming. Livingston Douglas’ update provides including a new route on the west side of Meade Peak that he reports “went beautifully and was never harder than Class 2.” Livingston also provides clarifications regarding the routes found in the book. Updated February 2021

Meade Peak is the highest point in the Pruess Range, which is a subrange of the Peale Mountains. This peak is connected to Mount Mansfield by a 9,100-foot saddle. I recommend climbing both peaks on the same day. USGS Meade Peak 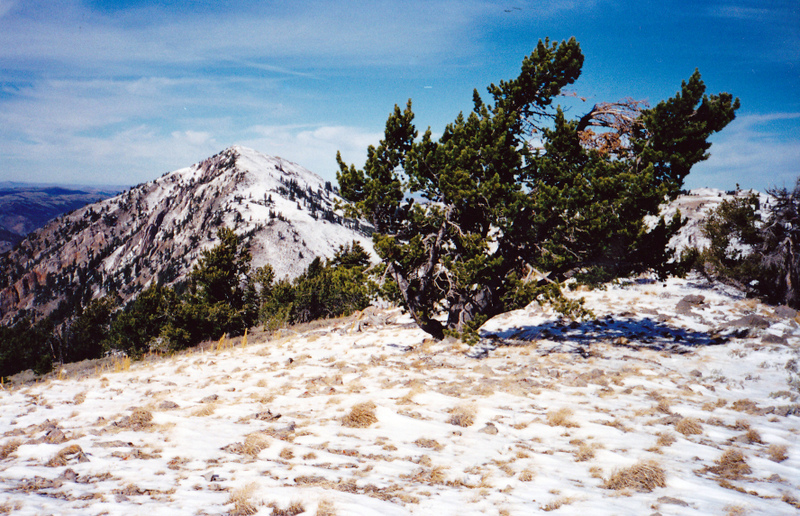 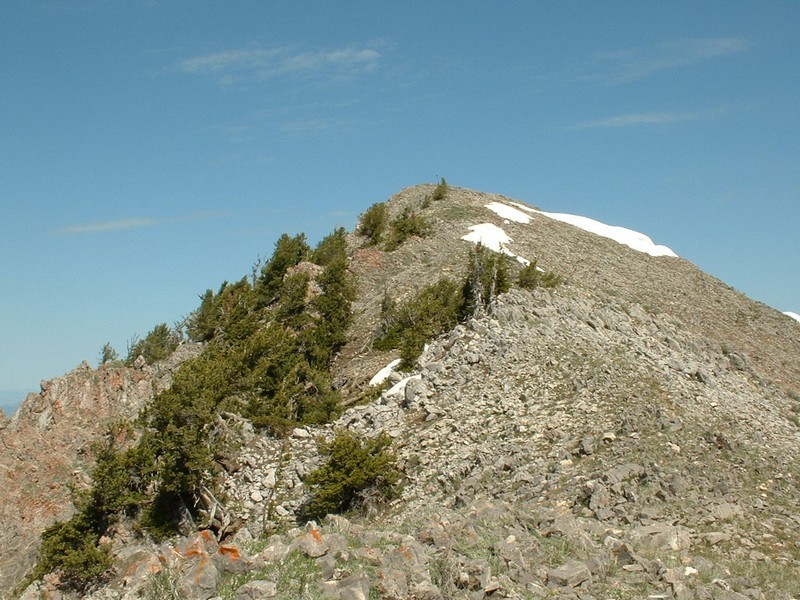 From US-89, two miles south of Afton, WY, take WY-236 to the west (this junction is at virtual milepost 82.9). At 2.6 miles, reach a stop sign. Continue straight ahead. The road becomes CR-142. At 3.5 miles reach a “T” intersection. Turn left onto Crow Creek Road. Follow Crow Creek Road, which is initially paved but becomes well-graded gravel. Cross the border into Idaho at about 7.4 miles. There is a junction to the right near here and several more along the way. It is obvious which is the main road, which runs up the Crow Creek Valley. This valley had the highest concentration of bluebirds we have ever seen, as well as a number of kestrels.

Just beyond the Clear Creek Guard Station, at about 20.5 miles, find FSR-698 on the right. This looks unpromising, and would be tough if it were wet, but I managed to nurse my Accord over the ruts and through the sandy patches in both directions. Drive this road, staying on the main route where tracks head off, for 2.2 miles. A less-major fork goes right here. You can walk it, or drive some or all of it with a high-clearance vehicle. It goes about 1/3 mile before reaching a turnaround loop.

Beyond here, it is a trail. This point is at about 7,200 feet. We drove another 0.15 mile or so, and found the point where FSR-698 drops steeply into the Beaver Dam Creek drainage. You’d want a 4WD to be comfortable about getting back up this hill. At the bottom of the hill is a sign for FST-114, the Beaver Dam Creek trail. We walked this, willow-bashing along the creek, until we reached the end of the “less-major fork” described above. We walked the road on the way back.

Hike the trail up Beaver Dam Creek. In its lower reaches (until about 9,000 feet), it is heavily used by cattle and is very dusty (or probably muddy, at wetter times of the year). The trail is shown on the Meade Peak quadrangle, but not on the quad to the north. For reference, it follows the creek to about 8,300 feet (“Creek” on the map), then heads to the right up the ridge north of the creek. It drops NE to the SW slope of the canyon which contains “8,600” and heads for the saddle just west of Point 8900+. Before it gets there, it heads up and left steeply, circling around “32” and picking up the ridge trending WSW. It follows this ridge, generally on top or just S, to about 9,550 feet, where it contours over to Saddle 9548 and drops slightly to meet the trail on the map (which is the Snowdrift Mountain Trail).

The Beaver Dam Creek trail is well defined to about 9,000 feet. Above there, look for an off-and-on track and blazes where there are trees. Upon reaching the Snowdrift Mountain Trail, note where this junction is for your return trip (it’s not obvious on the way back). Then turn left and hike down into upper Meade Basin. Find a good spot to head toward the North Ridge of Meade Peak (there are ATV tracks in the vicinity), and follow the ridge to the peak. The ridge is Class 1 to 2 all the way there. You can go around or through the craggy bits. No register was found or left. Round trip: About 11-12 miles with an elevation gain of 3,100 feet; 7 hours 30 minutes. 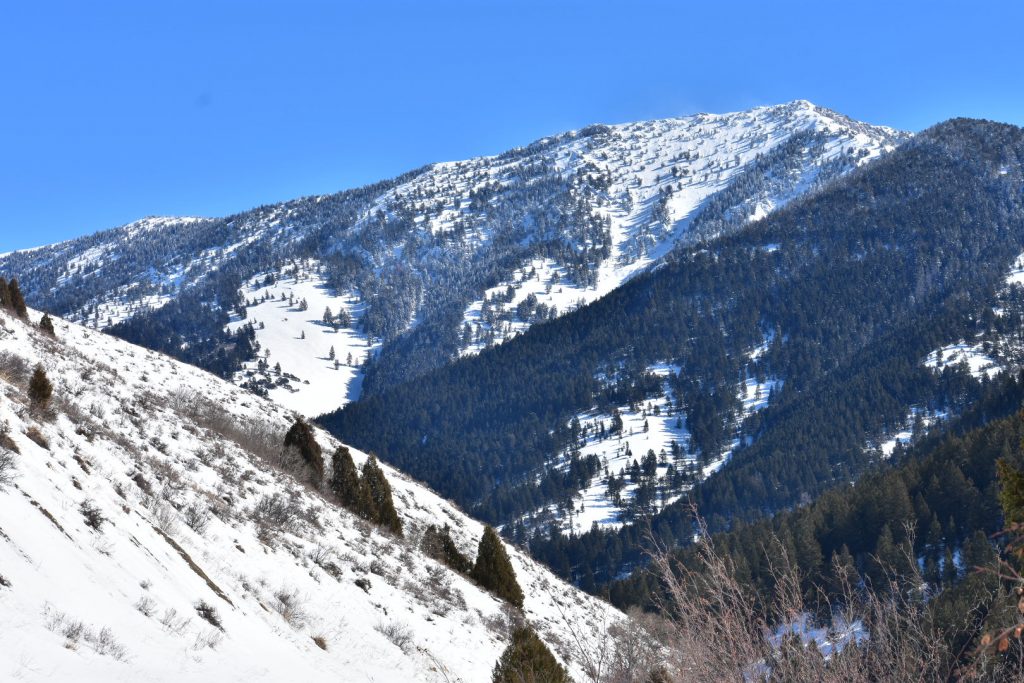 From the signed turnoff on US-30 in the center of the bustling metropolis of Georgetown, ID, turn east onto Georgetown Canyon Road (which is called Stringtown Road within the city limits). Drive up the road to a junction at 2.3 miles (LEFT is CR-1095/Left Hand Fork Road; STRAIGHT is Georgetown Canyon Road/FSR-102). Go straight; the road changes from paved to gravel here. At 3.1 miles, you will see an unmarked dirt road on the right/south side of the road. This is the Right Fork Road/FSR-225. Park here. The elevation at this junction is 6,290 feet. FSR-225 is a narrow jeep road that is not suitable for most vehicles.

From its junction with Georgetown Canyon Road, walk up FSR-225 for about two miles to a rightward bend in the road at 6,825 feet. As you hike up the road and you pass Peak 7551 on your left/west, you get a good look at the southwest aspect of the west ridge of Meade Peak. The terrain on the southwest side is NOT thickly forested as the USGS topo map suggests; it is actually quite open with scattered trees dotting the landscape. Use this opportunity to determine the line that you plan to take in order to climb up onto the west ridge.

Follow the ridge eastward, staying near the ridge crest and using a game trail and gaps in the scrub to expedite your ascent. The south side of the ridge crest (and oftentimes the ridge crest itself) is clean and open. By now, the veg has thinned and shortened making for easier traversing. You soon reach Point 8800+ WEST (the first of two ridge points of equal height). This point is easy to ascend and has a large cairn atop it. Now your task is to traverse east to Point 8800+ EAST. This is more challenging. You must battle with a mix of forest, talus, and scrub to reach the smaller, and slightly higher (by five feet) EAST point. From there, descend east on scrub and talus (this is probably the rockiest section of the west ridge) to a saddle at 8,620 feet.

Continue to follow the ridge eastward, skirting a few MINOR rocky outcrops on the ridge crest. The embedded talus/scree from the 8,620-foot saddle to the summit actually made the climb easier than an ascent on loose dirt or broken scree. Stay to the right/south of the ridge crest to avoid any trees. You do NOT have to ascend through an upper section of forest as the USGS topo map suggests. You can stay in open terrain the entire way to the summit. There are some ugly, rocky aretes that feed into the west ridge from the right/south side of the ridge high up, but you never have to deal with them.

The summit of Meade Peak is a small area and is just the highest bump on a LONG ridge. It offers a stunning view of surrounding peaks. The summit has a modest cairn, two USGS benchmarks nearby, and some recent summit registers in a glass jar.

The book states (on Page 369) that Meade Peak’s “south ridge and west slopes are Class 3 scrambles on rotten rock.” I could not disagree more. The west slopes (e.g., west ridge) are Class 2 scrambles on very little rock, none of which was particularly “rotten.” The south ridge is also a Class 2 endeavor (see the south ridge route). The southwest face appears to be a Class 3 scramble and may very well be on unstable, rotten rock. I would not advise climbing that face of Meade Peak.

From the summit, descend southeast along the ridge on a moderately steep scrub-and-scree/talus mix. To keep the south ridge at a Class 2 difficulty, you must stay on the left/northeast side of the ridge crest. The entire east side of Meade Peak is a gentle slope of desert scrub; not a tree in sight. Follow the ridge crest (which is indicated by the Caribou County/Bear Lake County border on the USGS topo map) southeast to reach a flat meadow at about 9,450 feet. By doing so, you will stay away from the nasty, rocky aretes and rocky outcrops that are located just west of the ridge crest. I saw two nice mule deer bucks in this meadow as I descended the south ridge.

From the meadow, bend right/south and continue south to a long, treed, narrow saddle. The ridge crest here is clogged with trees and blowdown, so move around it to make progress. I found intermittent game trails here to help. You have now reached the 9,162-foot connecting saddle between Meade Peak and Peak 9768/Mount Mansfield.

See the trip report links below for more information.