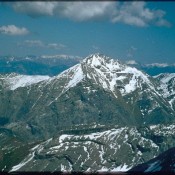 Climbing and access information for this peak is on Page 282 of the book. There are two routes listed in the book. Expanding on this information, you will find below the Northwest Gully/North Ridge Route set out in photos followed by photos of Pat McGrane’s Complete North Ridge Route. Derek Percoski climbed the peak via its South Ridge which was likely a first ascent. His route and two photo are set out below. Charlie Eiriksson’s exciting Pinstripe Couloir route is next. At the bottom of the page is Brett SergenianBrett Sergenian’s trip report and GPS track for the Southwest Face Route. Updated October 2020

Mount Corruption is one of my favorite Idaho mountains. It is the 21st-highest peak in the State of Idaho. Back in 1992 when I climbed it, only Rick Baugher and I had shown any interest in what was then an unknown peak. Mount Corruption sits well off the main crest of the Lost River Range and this remoteness adds to its allure. The route I climbed on this peak is one of the most varied routes I have climbed in the Lost River Range. It includes a hidden route into a hanging valley, a huge talus slog, and an ascending knife-edged ridge with a Class 4 crack near the summit. Mount Corruption will test your stamina and your desire, but its rewards make it all worthwhile. USGS Leatherman Peak 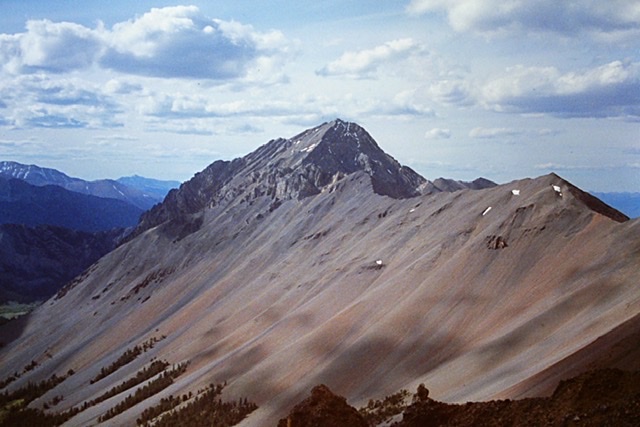 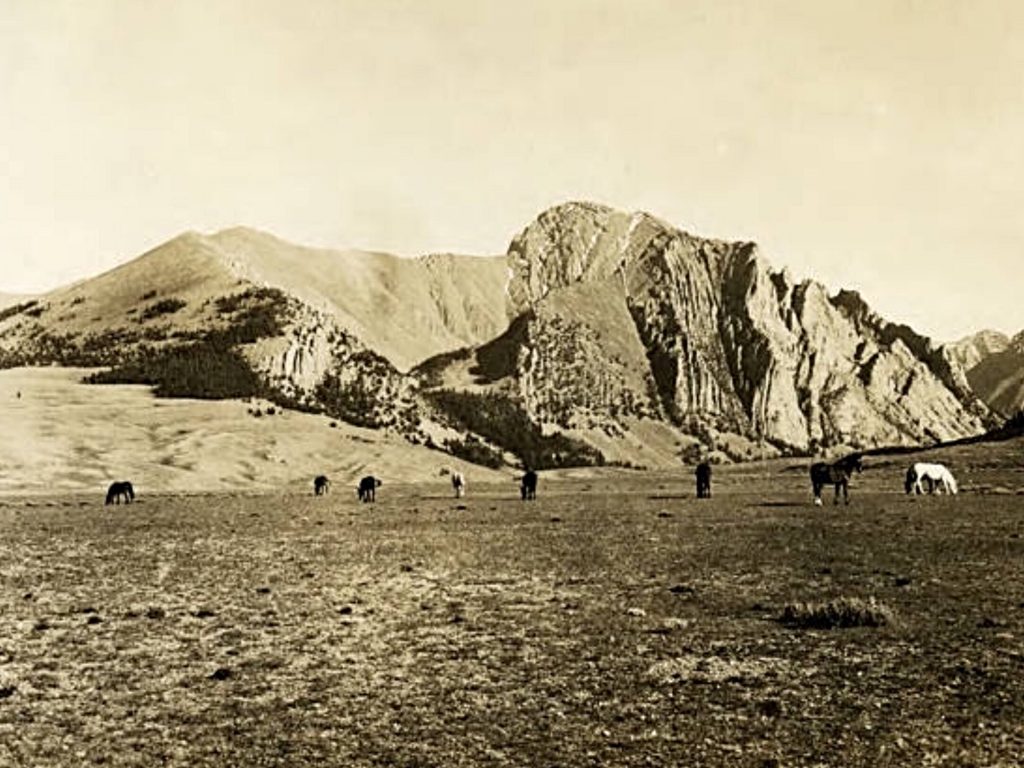 This 1934 photo by Lyman Marden of the USGS called the mountain “Dudley Peak.” That name never showed up on a map.

This is the route set out on Page 282 of the book. Pat McGrane’s variation (below) avoids the tough talus scramble from the Northwest Gully to the top of the ridge. However, neither route avoids the Class 4 climbing on the upper ridge. The crux of this route is a 20-foot, nearly-vertical crack. Pat’s route avoids the chimney but still crosses Class 4 terrain. 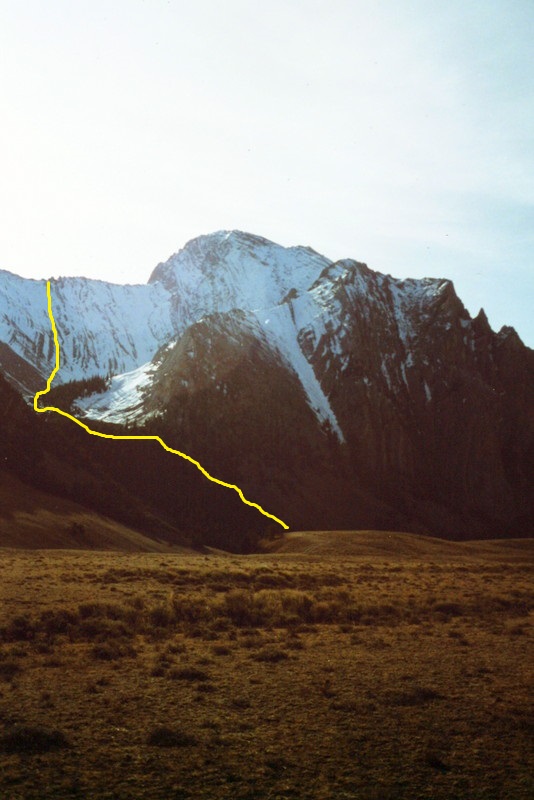 The approximate line of the Northwest Gully/North Ridge Route. From the top of the ridge, cross over to the summit block and then work your way up the ridge. See the book for more details. 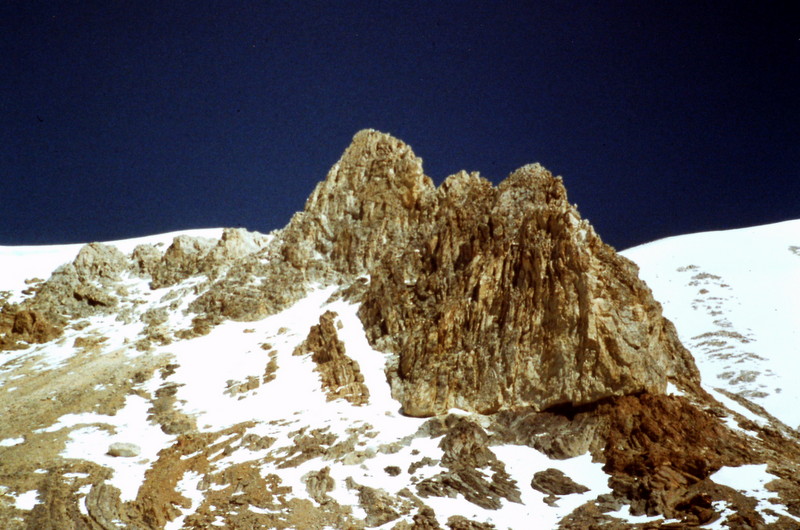 The slope leading to the ridge crest is tedious at best and very loose at worse, but it is a scenic route. 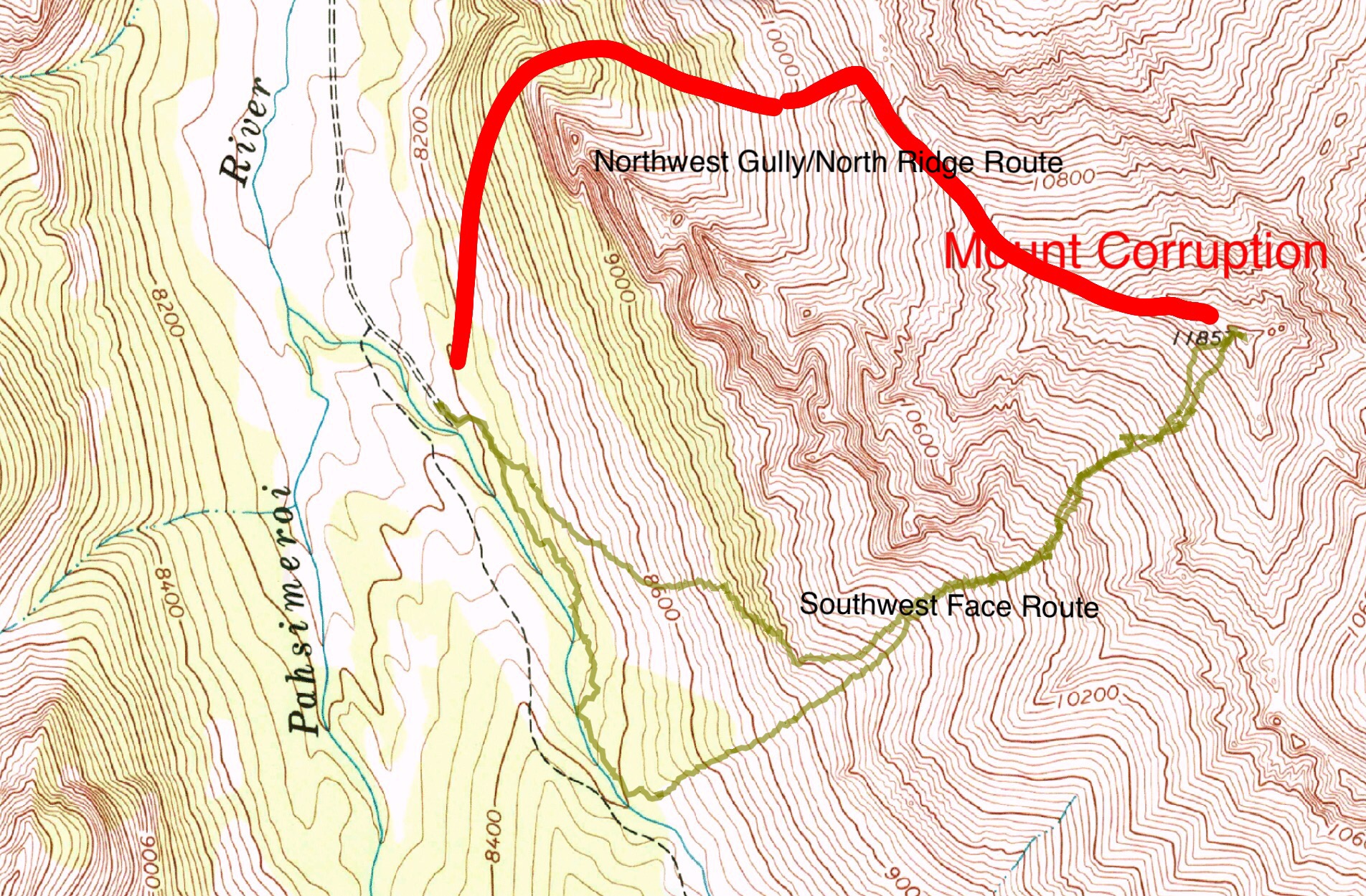 Pat McGrane climbed the entire North Ridge joining the Northwest Gully/North Ridge at roughly 10,500 feet. Pat avoided the 20-foot crack that I climbed and used an exposed white slab on the West Side of the ridge. His photos of the route follow. 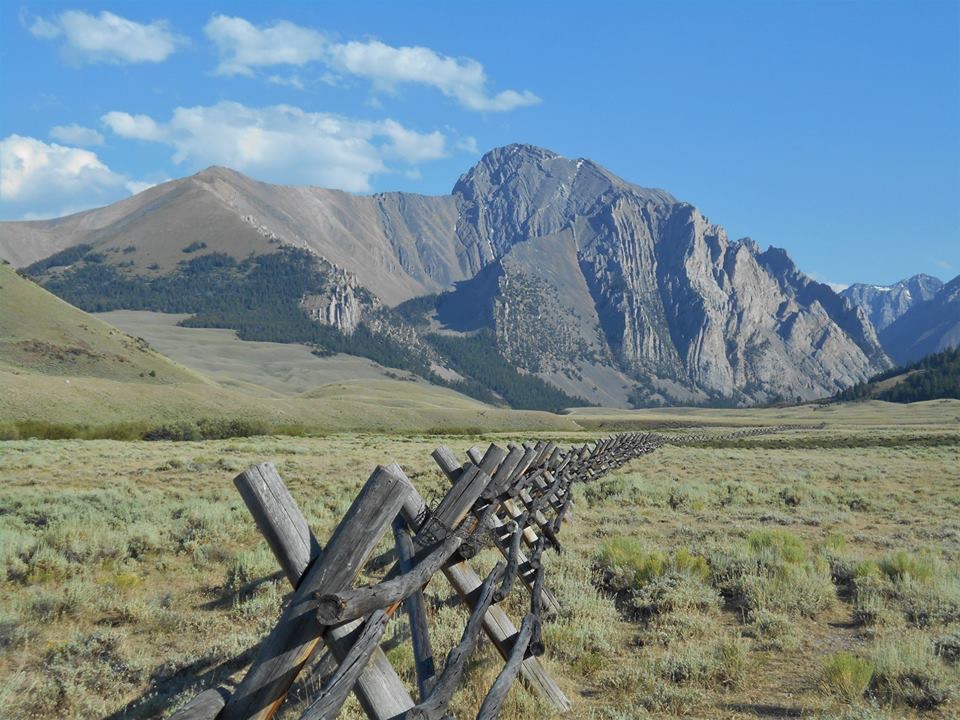 Mount Corruption with the North Ridge curving up on the left. Pat McGrane Photo 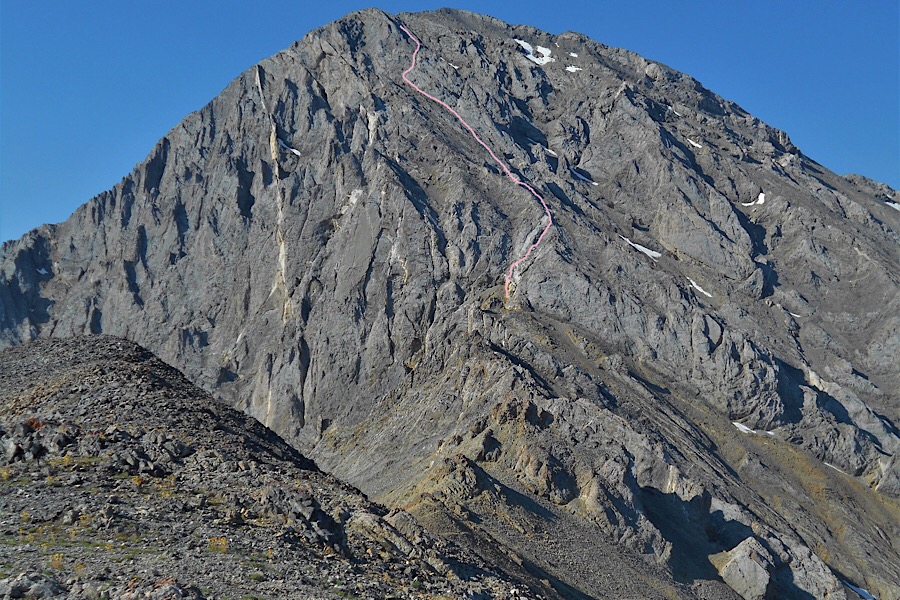 The Upper North Ridge (with the route drawn in) as viewed from roughly 10,500 feet. Pat McGrane Photo

Pat avoided climbing the 20-foot crack. He reports:  “I did not do the 20-foot crack.  That crack is nearly vertical and begins 30 feet above a sloping ledge. A fall from it would be fatal. I opted for the easier white slab to the right.” 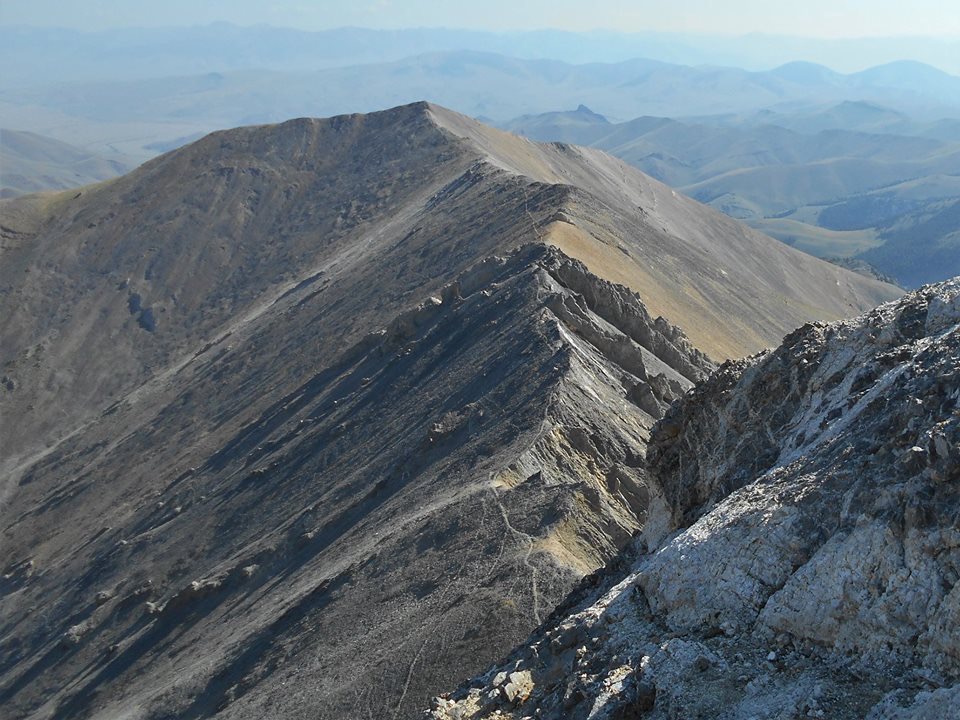 Pat avoided the 20-foot crack that I climbed and used an nearby exposed white slab (shown in this photo) that starts on the East Side of the ridge and wraps around to the West Side. Pat McGrane Photo 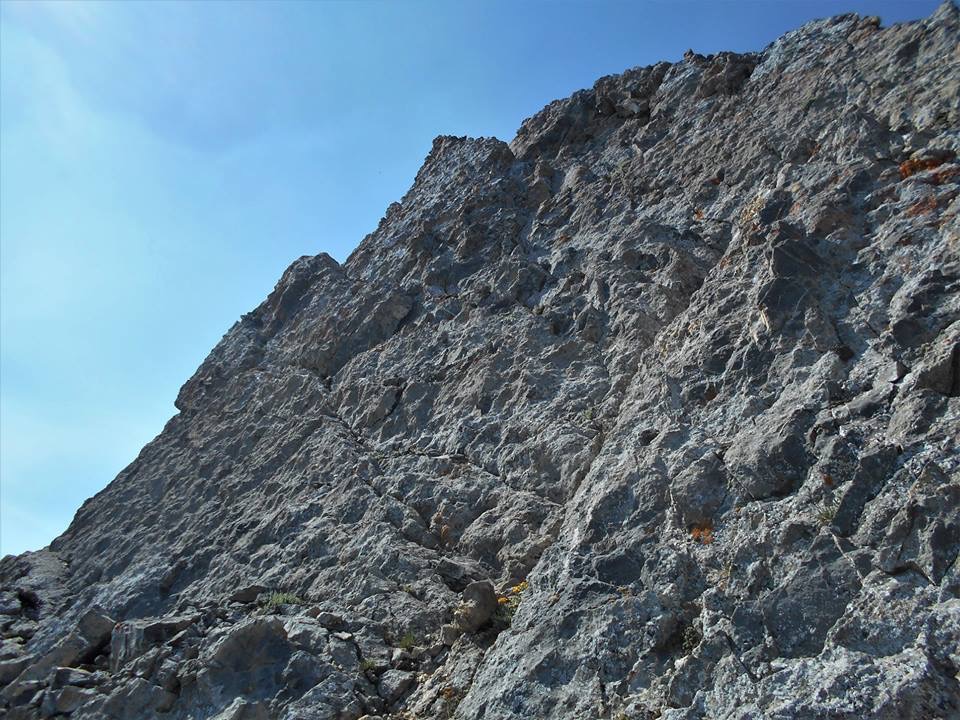 The south ridge offers a solid scramble from 11K up. Getting up there from East Fork Pahsimoroi does require a talus slog similar to the southwest gully, but not as long and you’d get to skip out on the loosest terrain (the areas with a tan color on satellite images). Up the south ridge and down the southwest gully is a good way to climb this peak. Approaching from West Fork Burnt Creek is also an option—just with a much longer approach hike.

A climber should aim to intersect the ridge at 10,900′ to avoid the
troublesome towers below there. For much of the route, you’ll likely find
yourself just west of the ridge crest on the grippy slabs. There are plenty
of cracks and options along the way. Perhaps some climbers would be
intimidated looking down the slabs, but I wouldn’t classify it as
“exposure”. 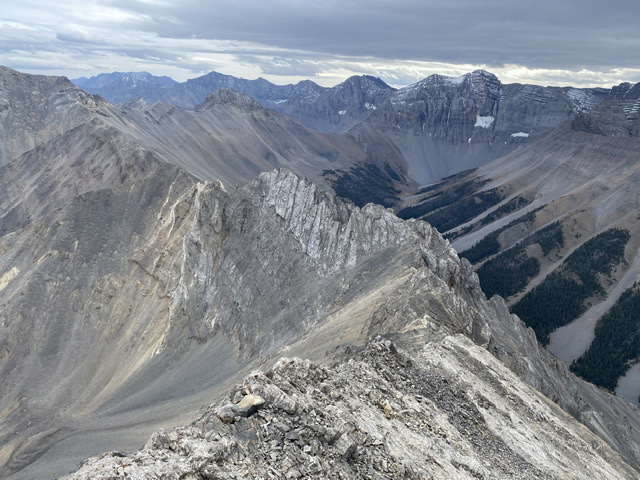 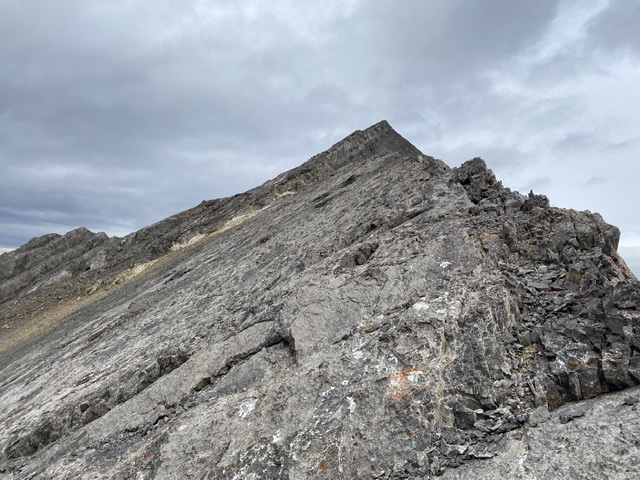 Looking up the South Ridge toward the summit. Derek Percoski Photo 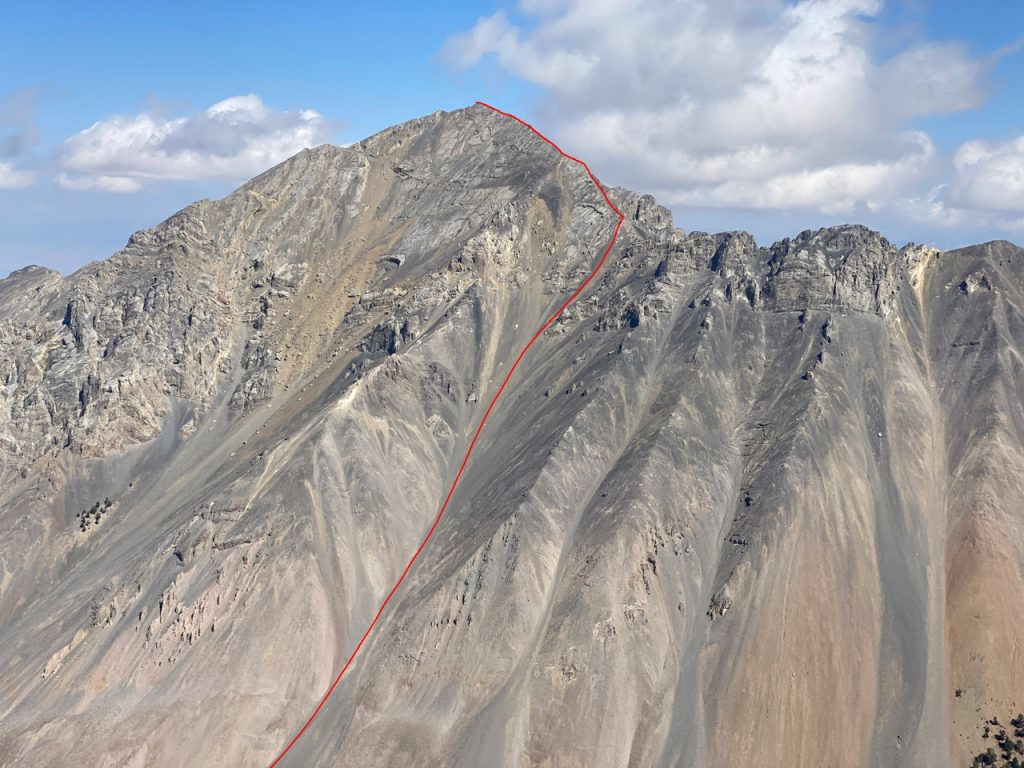 [Editor’s note: Access is the same as for the Northwest Gully/North Ridge route found on Page 282.] On 5/28/14 I summitted Corruption via a series of snow gullies up the north face followed by a descent of the southwest face. Aside from having to wade the Pahsimeroi first thing in the morning this seems to be the most pleasant ascent route on the mountain, starting with an easy walk through open forest up into the hanging canyon leading to the north face, mellow scree to the base of the face, and moderate snow all the way to the summit. An attempt on 6/20/13 failed in a snowstorm on the summit ridge after I missed a rightward traverse in poor visibility. There was no evidence of significant rockfall nor of avalanche risk on either attempt. Obviously the route will melt out later in the year and the drive in may be problematic earlier. The route is not as steep as it looks. Do it! 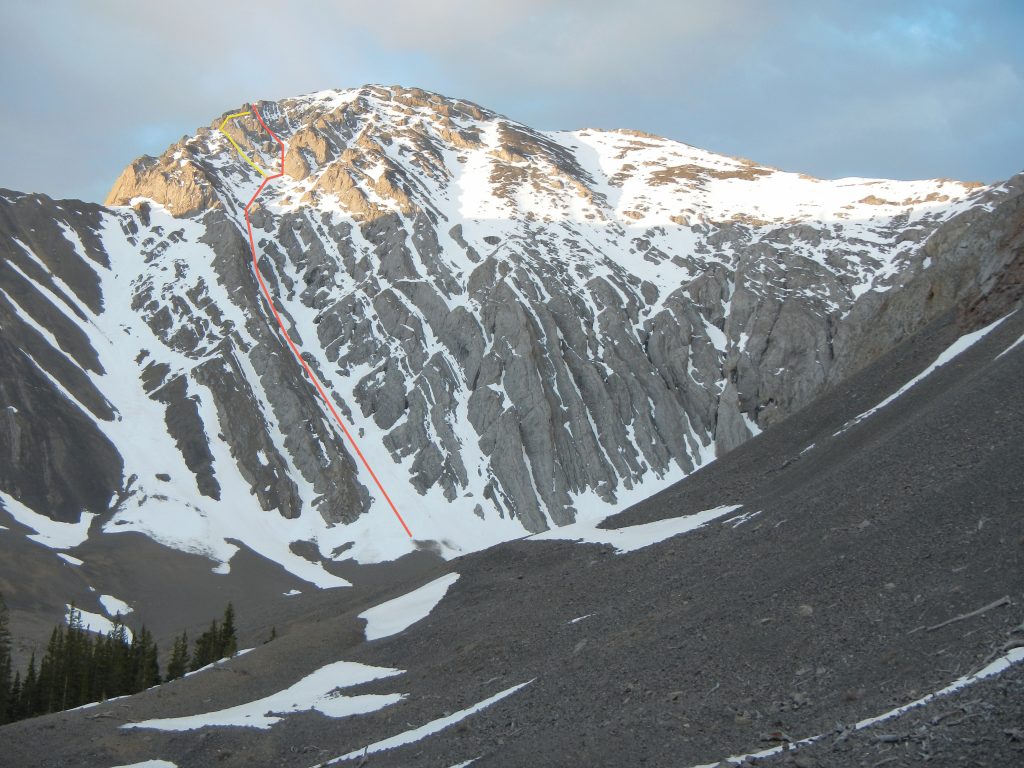 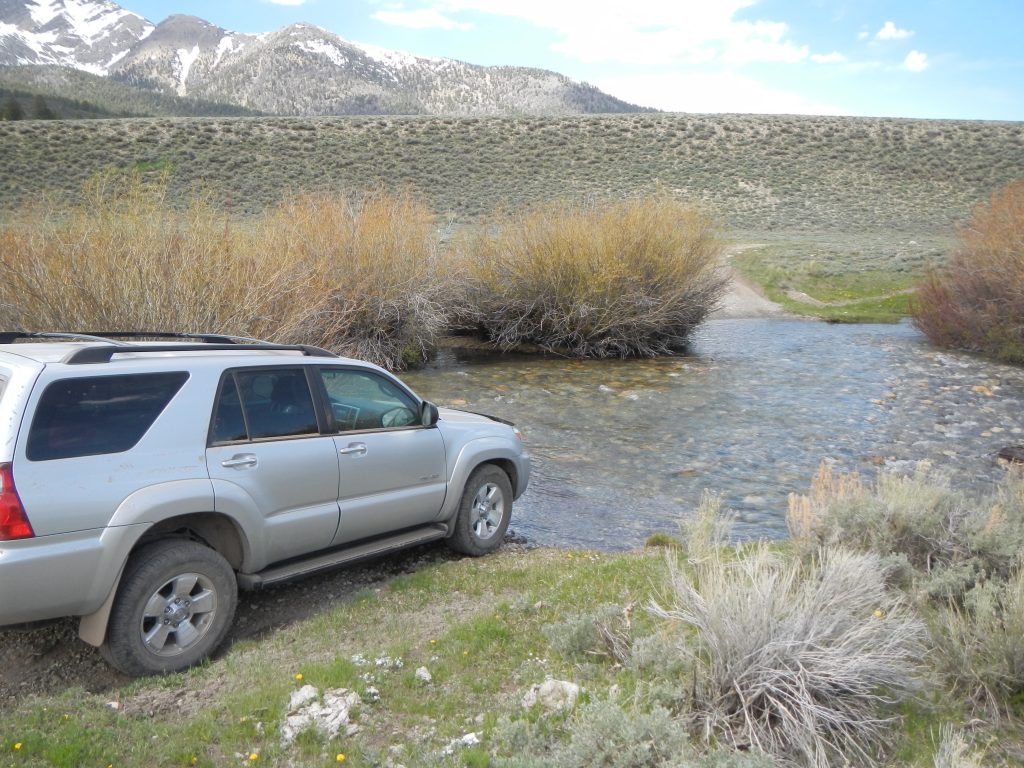 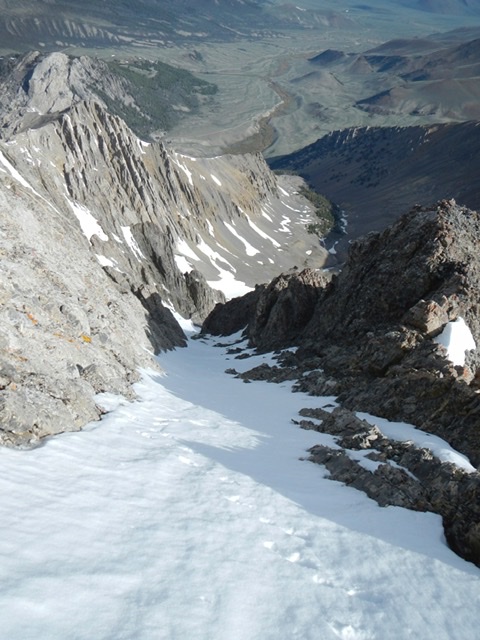 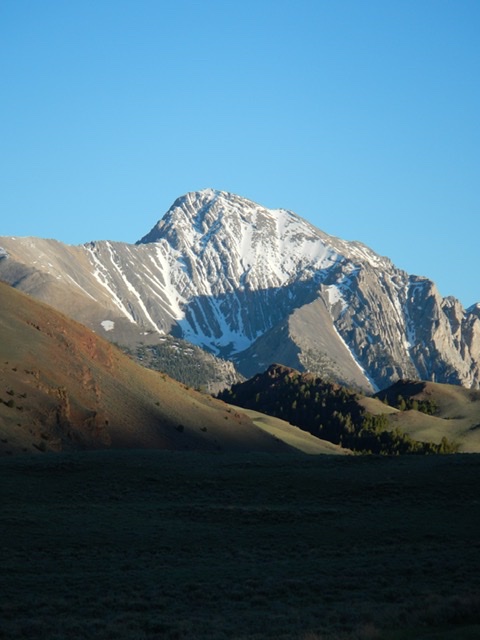 At the end of the road, I decided to head uphill to the cliff bands and then sidehill my way onto the Southwest Slopes. I soon realized that I probably should have attempted Mount Corruption a couple of weeks earlier as there was barely any snow. Most of the first 3,000 vertical  feet was on loose scree as most of the snow was gone. After having enough of the scree, I decided to climb the cliff bands. Luckily, the cliff bands were not terribly steep, so it was doable with only using my right hand for support. To the left was more scree which I planned to take on the descent.  After 4 long hours, I finally reached the summit after slowly navigating the cliff bands. It was slow going on the way down, as I could not swiftly head downhill on the scree and through a few cliff bands.

Finally, a few photos of this beautiful peak. 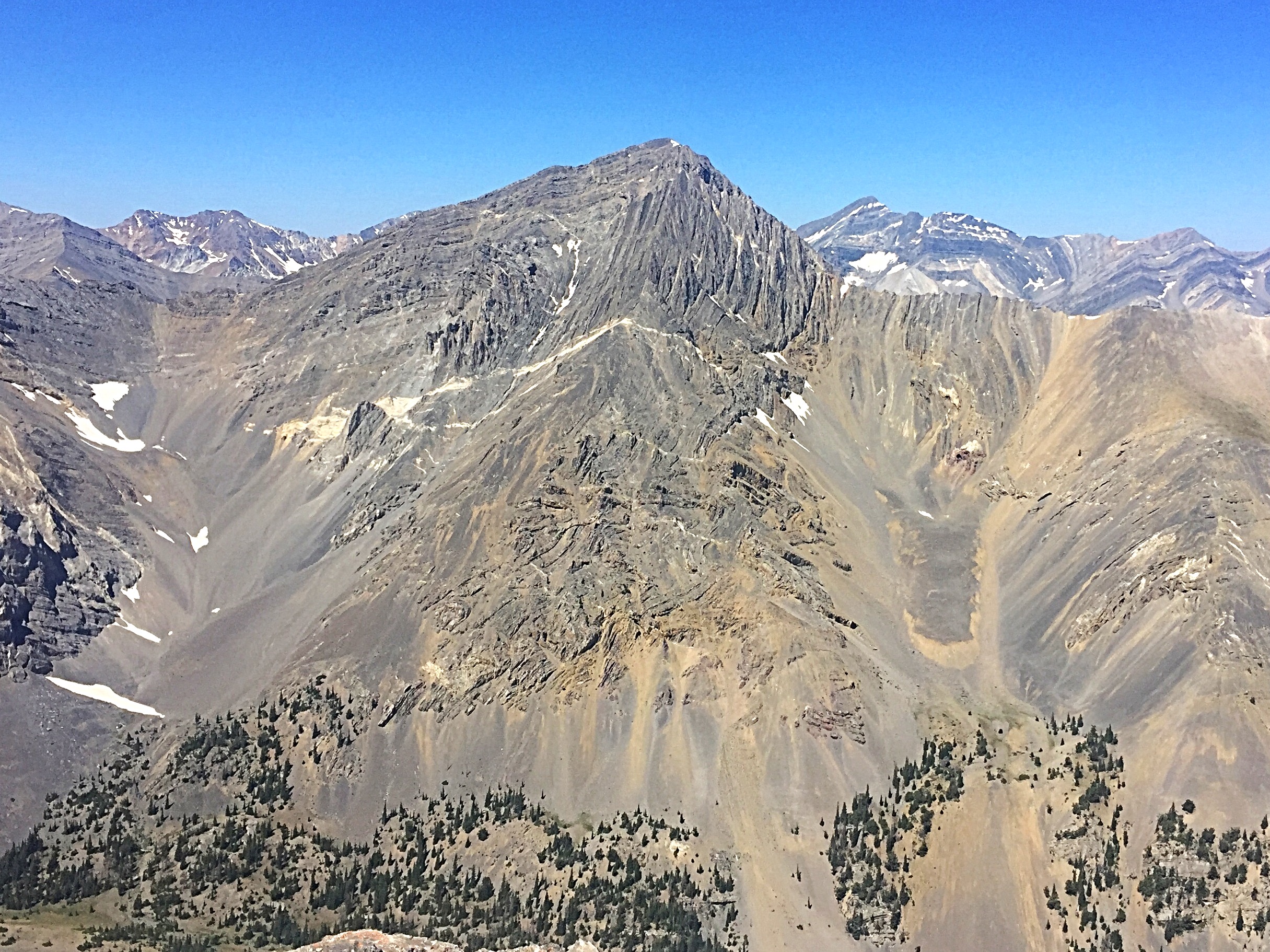 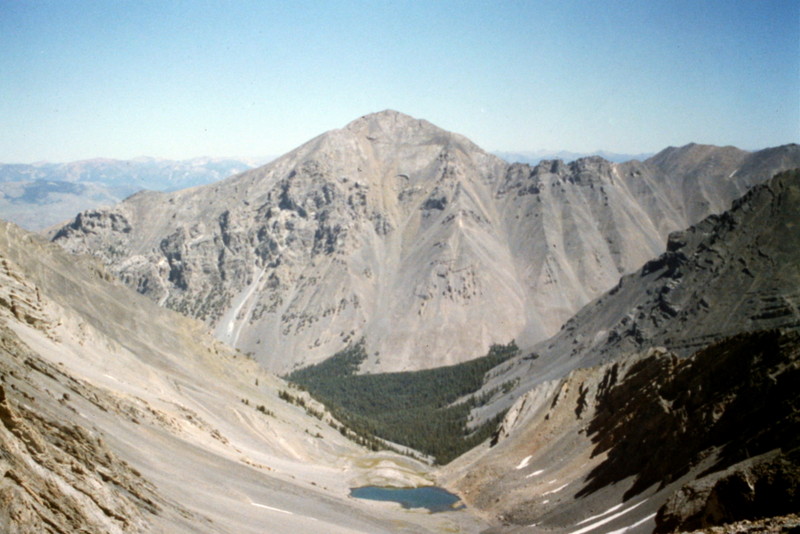 Mount Corruption as viewed from the col between Leatherman Peak and Bad Rock Peak. The route is not visible in this photo. 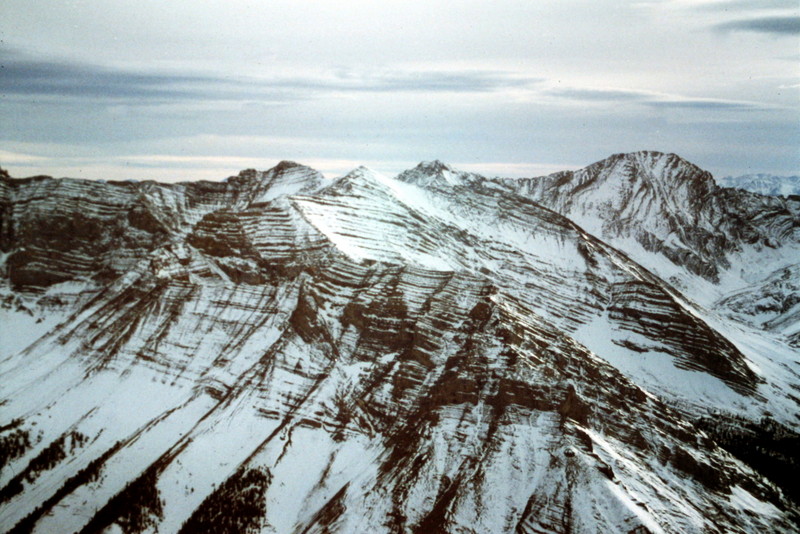 The view toward Mount Church and the main Lost River Range Crest. 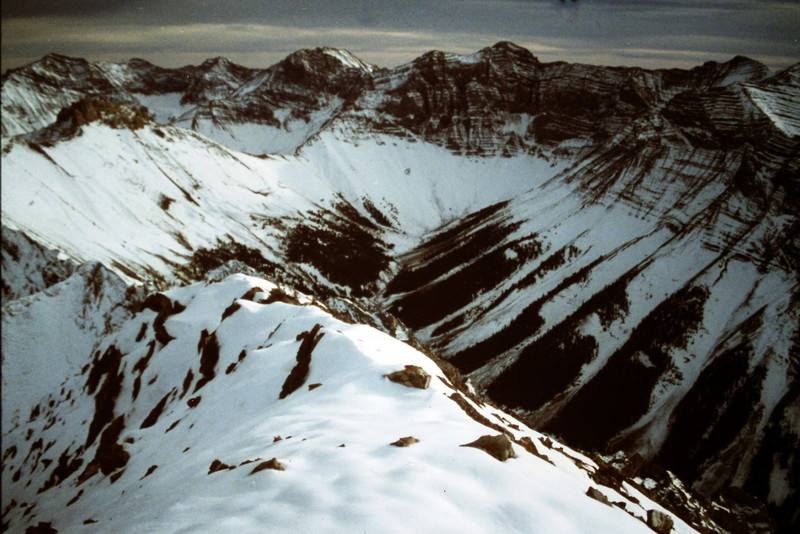 The view toward the Triple Peak/Mount Breitenbach Pass. 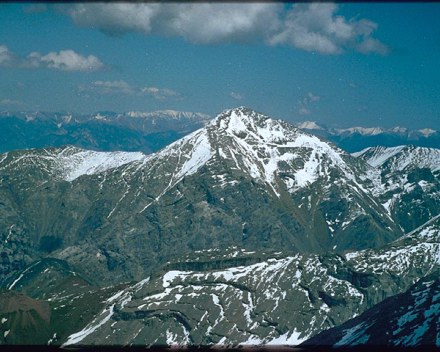 Mount Corruption as viewed from the west.