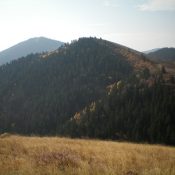 Peak 7535 is one of four peaks that surround Reservoir Canyon in the Grays Range. It is the final peak in a four-peak adventure that includes Peak 7442, Little Gray Ridge (8,050 feet), Peak 7313, and Peak 7535. Peak 7535 is most easily reached from a 2-track road in Reservoir Canyon to its north. USGS Wayan West 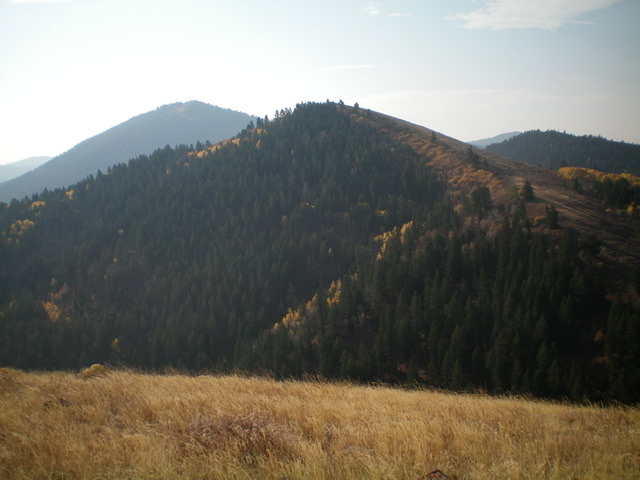 Same as for Peak 7442. This is the final leg of a four-peak journey that begins at Henrys Cutoff Pass.

From the 6,900-foot center of Reservoir Canyon, hike briefly right/west up the jeep road to reach the open terrain on the right/west side of the north ridge. Avoid the thick forest at all costs. Bushwhack up through brush and sagebrush and angle left/east toward the ridge crest. Follow a good use trail through a short patch of thick aspens to reach the crest of the north ridge. A weak game trail follows the ridge crest much of the way to the summit, but the scrub here is short and easy. The summit of Peak 7535 is a grassy hump with a modest cairn. 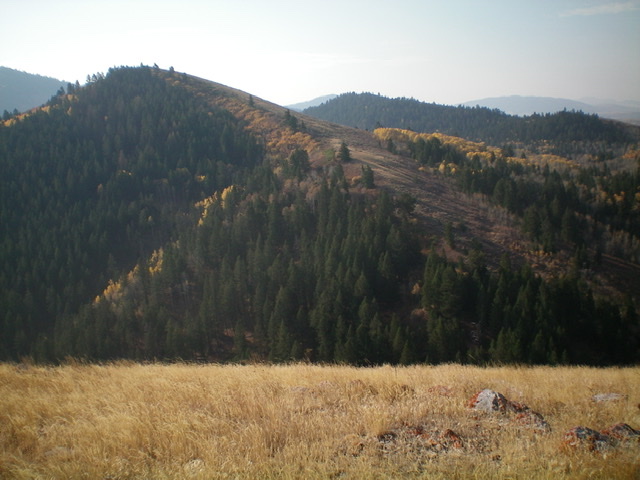 Peak 7535 (mid-ground) and its north ridge. The north ridge goes from lower right to the summit (left of center). Livingston Douglas Photo 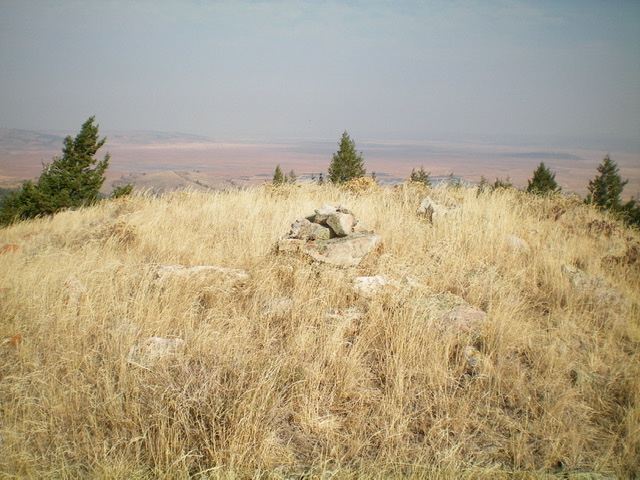 From the summit, descend the open scrub of the south face/ridge to cross an unnamed canyon with a jeep road in its center (as shown on the USGS topo map). The scrub on the south face is mostly easy but there are a few sections of thick brush and sagebrush. Aim to cross the canyon where an obvious gully heads south toward the critical ridge saddle that you must get up and over in order to return to Henrys Cutoff Pass. You should cross the center of the unnamed canyon at about 6,900 feet. 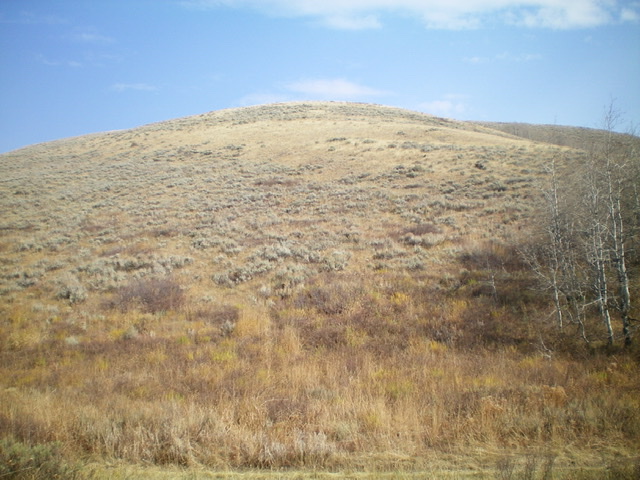 Looking up the sagebrush-and-grass slope of the south face/ridge of Peak 7535. Livingston Douglas Photo

From the canyon floor (6,900 feet), bushwhack south up the dry gully using a cattle/use trail initially. The pine forest is fairly open in this gully and, surprisingly, there is NOT much brush to contend with. However, there is a fair amount of LARGE downed trees to work around. After about 300 vertical feet of uphill, you emerge on the saddle that sits under, and just east of, Peak 7442. Follow a cattle trail that contours southeast from this saddle, skirting the right/west side of a ridge hump and passing through thick sagebrush. Follow another cattle trail through more thick sagebrush down a dry gully to return to Henrys Cutoff Pass and your parked vehicle.