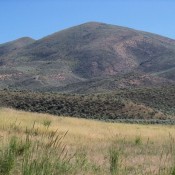 The Pruess Range is a subrange of the Peale Mountains and includes its main escarpment as well as Dry Ridge, the Gannett Hills, Freeman Ridge and the Sheep Creek Hills. The range forms the southern end of the Peale Mountains and is roughly 25 miles from north to south and 12 miles from east to west. The Preuss Range is named for Charles Preuss (1803-1854), the talented German-born cartographer/artist on John C. Fremont’s 1843 expedition thru southern Idaho. As a result of Preuss’ 1850 map of the Oregon Trail thru Idaho, the geologist Albert C. Peale in 1879 named a prominent Idaho mountain range in his honor. Meade Peak is the highest point in the range.

Livingston Douglas has provided many of the updated access and route descriptions found on the website. He recommends the follow three-peak traverse: The Giveout Triple Play

The Sheep Creek Hills are a southern extension of the Preuss Range in far southeastern Idaho. Boundaries are Montpelier Canyon to the north, Thomas Fork Valley and Wyoming to the east, Bear River to the south, and Bear Lake Valley to the west.

The Oregon Trail crossed the southern section of Sheep Creek Hills. For thousands of wagon bound emigrants of the 1840’s-1850’s, this was their Idaho point of entry. Weary travelers were “welcomed” with a daunting ascent and descent of “Big Hill,” one of the most difficult sections on the entire Oregon Trail.

The Sheep Creek Hills High Point (7,826 feet elevation; 886 feet of prominence) is at the north end of this hill group. It rises east of the town of Montpelier and is adorned with communications towers.

Dry Ridge is one of the middle fingers that extend northward from the “wrist” of the Preuss Range (Peale Mountains). Schmid Ridge parallels it to the west, while the more substantial Webster Range, defining the perimeter of Idaho’s Southeast Highlands, lies to the east. 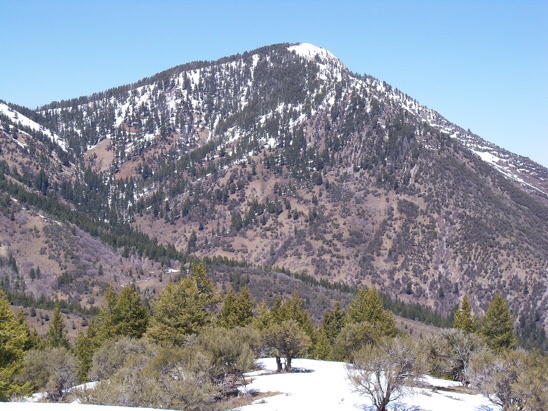 The view north to Hawks Peak (4/30/14). The Southwest Ridge is on the left skyline. Subsequent research has indicated this peak was used for triangulation by USGS topographical engineer George T. Hawkins in preparing the Montpelier 30-minute quad of 1909. I’d like to think the peak was named for the bird and the man. Rick Baugher Photo

Dry Ridge is difficult to catalog. Much of its 20-mile length is and has been mined for phosphate. Yet it has pockets of wild spots among its mixture of forest and brush. In the course of exploring the 9 ranked peaks on Dry Ridge, two were found to be unoccupied as late as 2014: “Hornet Peak” (8,623 feet elevation; 393 feet of prominence) and “Maybe Peak” (8,210 feet elevation; 520 feet of prominence).

The question about where Dry Ridge begins in the south is open to debate. Does Dry Ridge start at a political boundary, the Bear Lake/Caribou County line? Or is the southern boundary determined physically as the ridge dividing Georgetown Canyon? Various maps suggest different points of view. If we choose the first option, then “Dry Ridge Peak” (8,975 feet elevation; 925 feet of prominence) is the Dry Ridge high point. The second choice makes the high point the more visually-prominent Hawks Peak (9,079 feet elevation; 1,299 feet of prominence).

Once, again, thanks to Rick for the following:

The Gannett Hills straddle the Idaho/Wyoming line. They are equally shared. According to U.S. Geologist George Rogers Mansfield, who named this feature in 1916, the Gannett Hills honor the eminent geographer Henry Gannett (1846-1914) who, as topographer with the Hayden Survey, mapped this region circa 1877.

Mansfield stated the Gannett Hills are 27 miles in length and have a maximum width of 14 miles. These hills are bounded by Star Valley and US-89 on the east, and Preuss Creek and Crow Creek on the west. The Gannett Hills are sandwiched between the Preuss Range (Idaho side) and the Salt River Range (Wyoming).

Mansfield identified Red Mountain in Idaho as the highest peak in the Gannett Hills. His 1909 elevation was 8,799 feet. The current reading is 8,809 feet. Google Maps, however, shows a “Gannett Hills HP” on the Wyoming side. This corresponds to “Crossley Benchmark” (8,792 feet elevation; 1,052 feet of prominence).

A good portion of the Gannett Hills is in roadless, hard-to-reach country within the Bridger and Caribou-Targhee National Forests.

Thanks to Rick Baugher for the following:

George Rogers Mansfield described Freeman Ridge in the 1927 USGS Professional Paper #152 as follows: “Freeman Ridge, a subsidiary member of the Webster Range at the southwest, takes its name from Freemans Pass. It is 8.5 miles long but only a mile wide except at its south end. It is separated from the main range by a succession of subsequent valleys and cols and is divided into smaller units by several passes, of which Freemans Pass is the lowest. It is a conspicuous topographic feature… separated from Snowdrift Mountain by the deep through valley of Deer Creek.”

Using the above definition, there are 4 ranked peaks on Freeman Ridge. The ridge high point (8,716 feet elevation; 946 feet of prominence) has been dubbed “Spike Peak“. Several additional summits crowd this headwaters area of Blackfoot River in the adjoining Webster Range and Preuss Range.