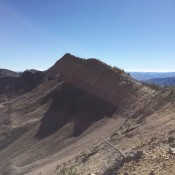 Climbing and access information for this peak is on Page 122 of the book. Updated and more detailed information is set out below. Updated July 2018

Red Peak Benchmark is the highest summit found in a large, remote area east of Yellow Pine, Idaho and west of the Middle Fork Salmon River. The peak sits on a ridge line between Murphy Peak and Red Peak. The view from the top is endless and includes the Lick Creek Range, Big Baldy Peak, Pinnacles Peak, the Sawtooths, the White Clouds, North and South Twin Peaks as well as everything in between. USGS Big Baldy 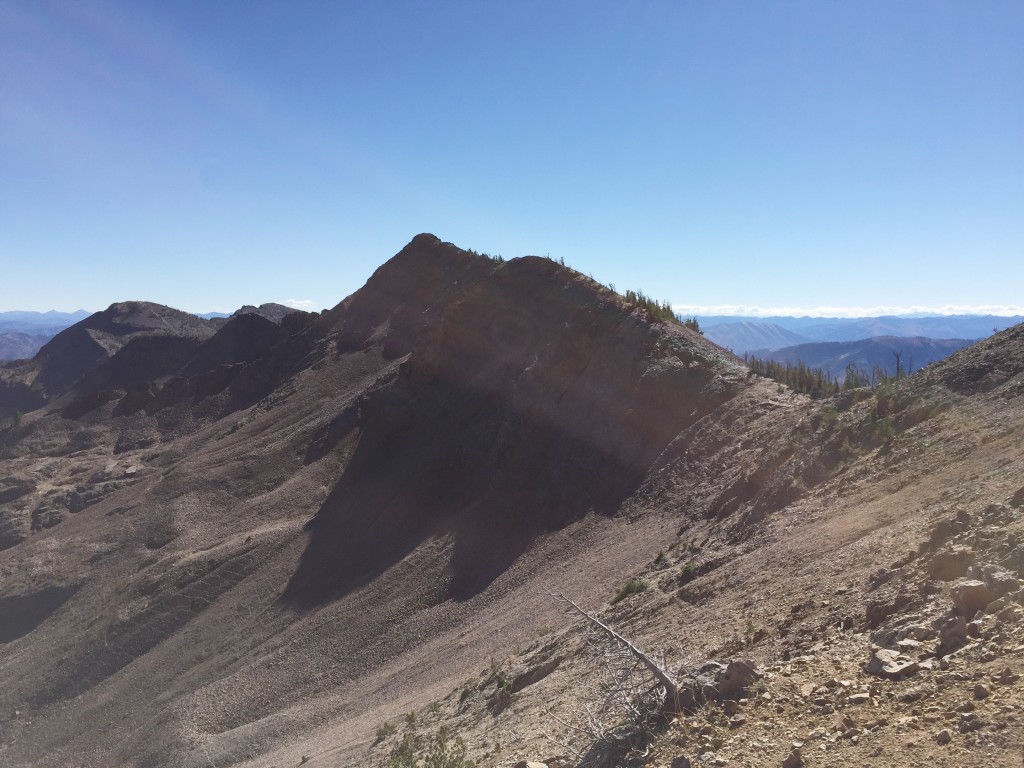 Red Peak Benchmark as viewed from the top of the last step on its North Ridge.

Here is some information on names in this area. On Page 122, I discussed two Red Peaks which are found on a ridge line running south from Murphy Peak. The map makers evidently had the name “Red” tattooed on their minds when they named features in this area. The name Red Peak was given to a peak just south of the higher peak identified by the map makers as Red Peak Benchmark. The name Red Ridge was a name given to an adjacent ridge that runs east from Red Peak Benchmark. Red Ridge contains two notable unnamed peaks. Just south of Red Peak, there are two more worthy summits. Interestingly, none of these peaks look red to me.

When I wrote the book, the only information I had on these peaks was that the peaks were remote, that hunters often hunted mountain goats along these ridges, and that the ridge was walkable. I was fascinated by this region because of its remoteness and the duplication of peak names. Despite my curiosity, I did not make it to this area until October 2015.

John Platt and I climbed Red Peak in 2015 by first climbing Murphy Peak and then traversing the long ridge to Red Peak Benchmark. This involved a one-way trip of 5.4 miles with 2,700 feet of elevation gain and 1,300 feet of elevation loss. The route drops steeply from Murphy Peak and then undulates up and around several ridge points before it begins a long stair-step climb to the summit. It’s a strenuous, but not difficult, traverse. 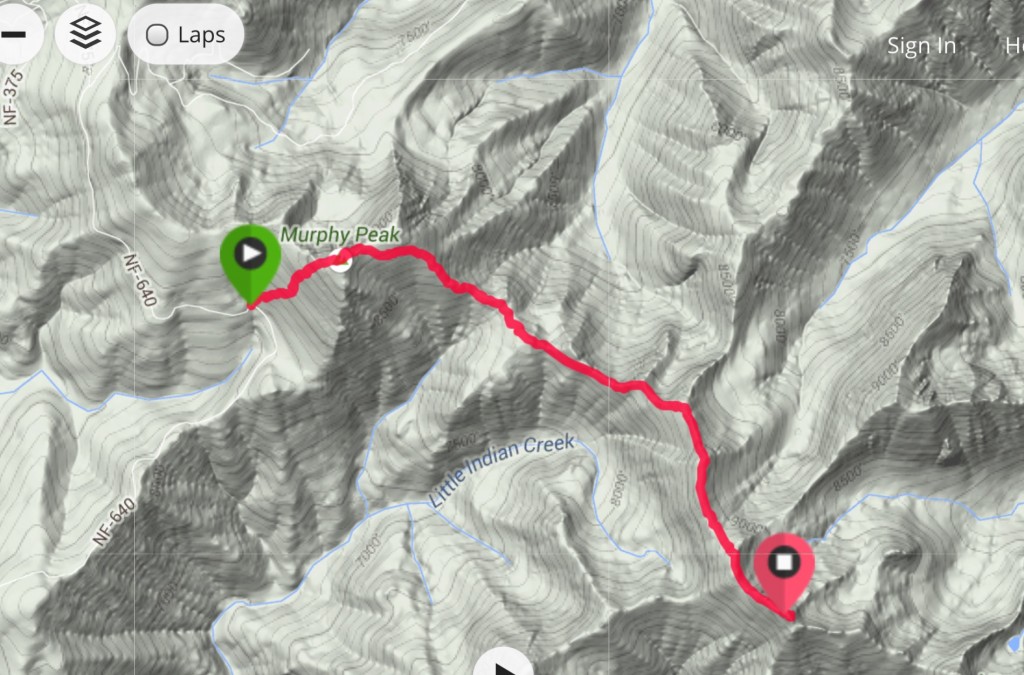 This is my GPS track for the climb up Murphy Peak and Red Peak Benchmark. 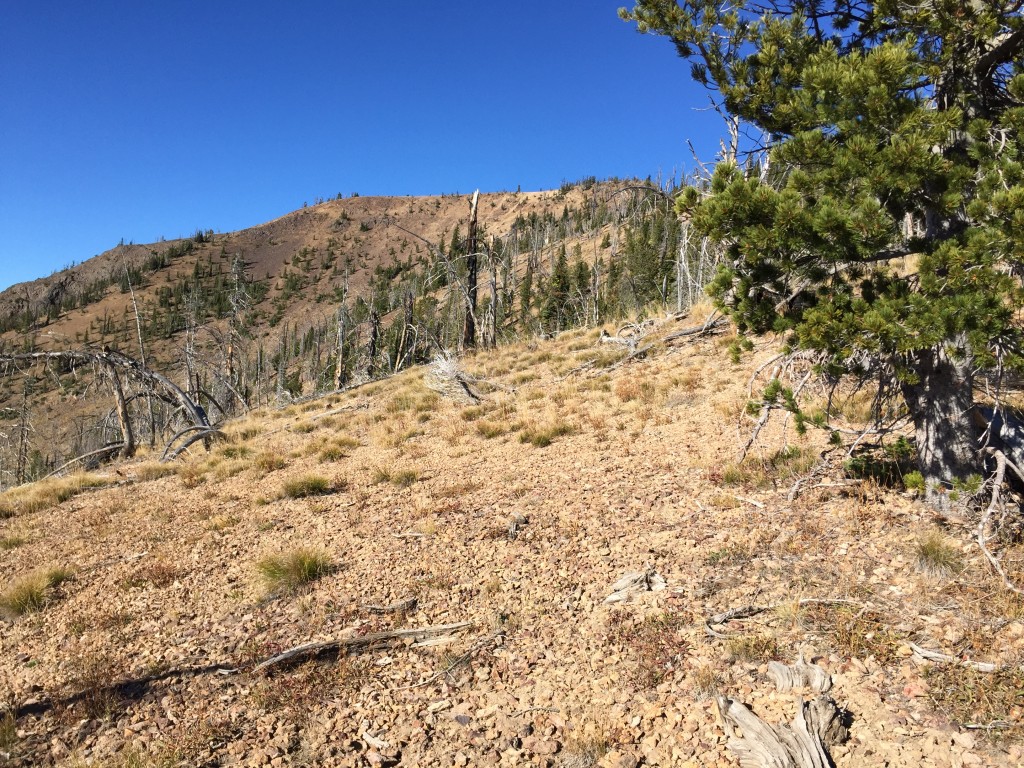 A view along the North Ridge. Sections of the North Ridge were open and others were forested. Footing varied from easy to ball-bearing, loose gravel. 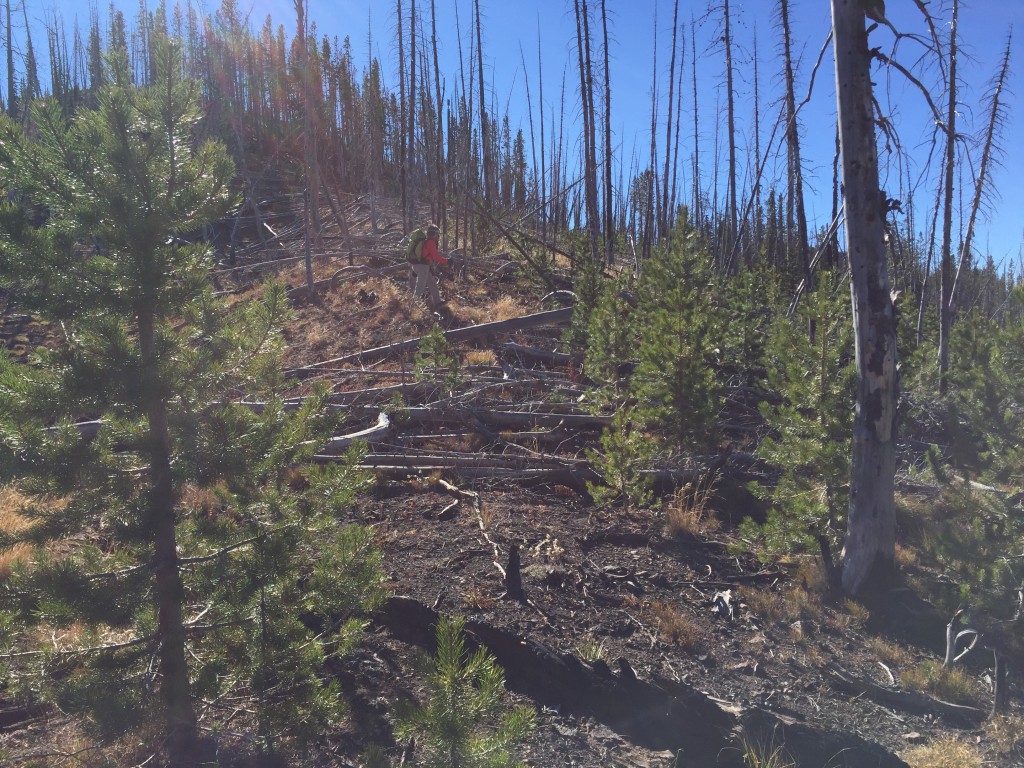 We ran into lots of downed timber on burned areas of the North Ridge. 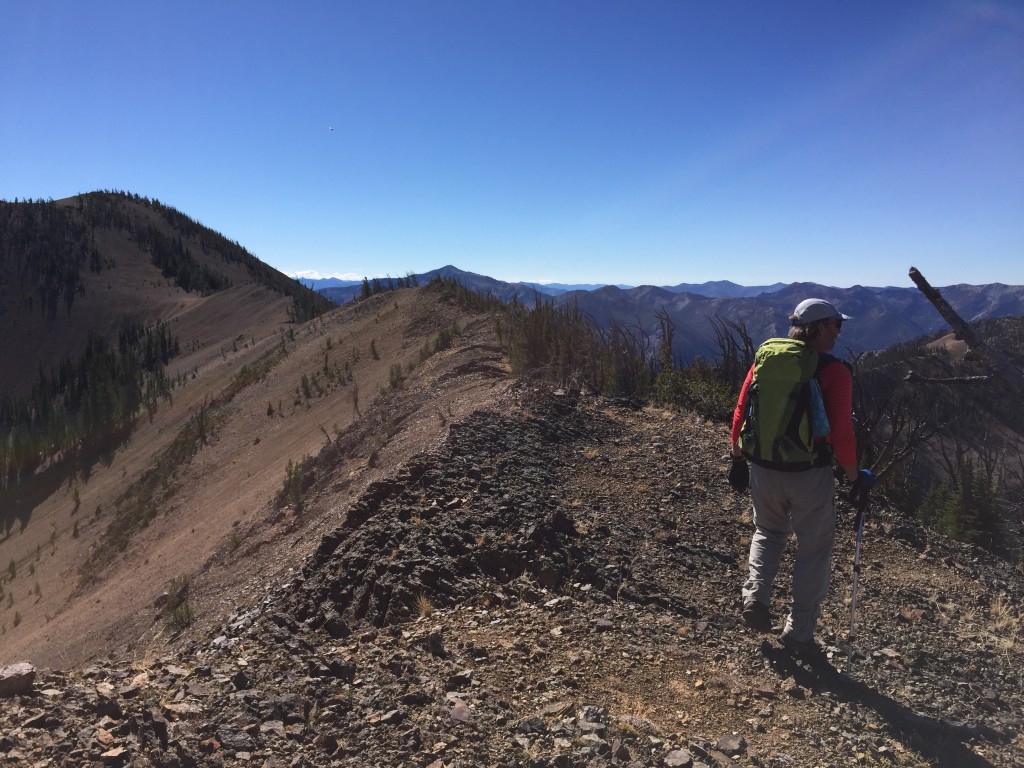 Once above treeline, we still had a long way to go. 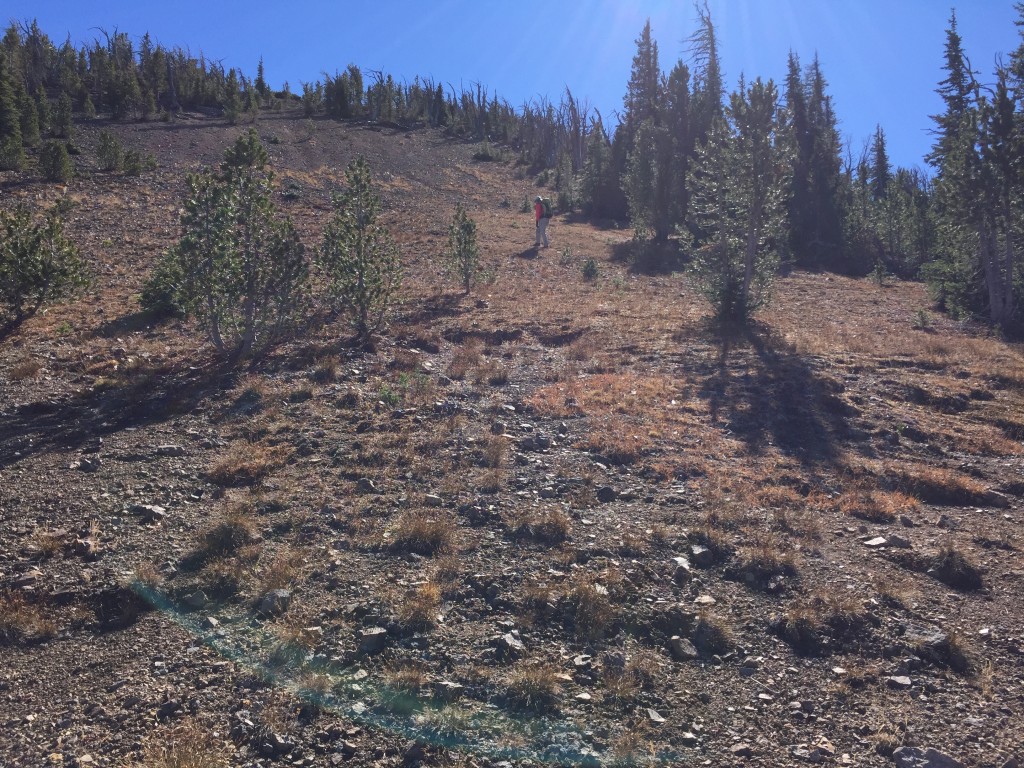 The entire North Ridge is Class 2 but it is LONG. 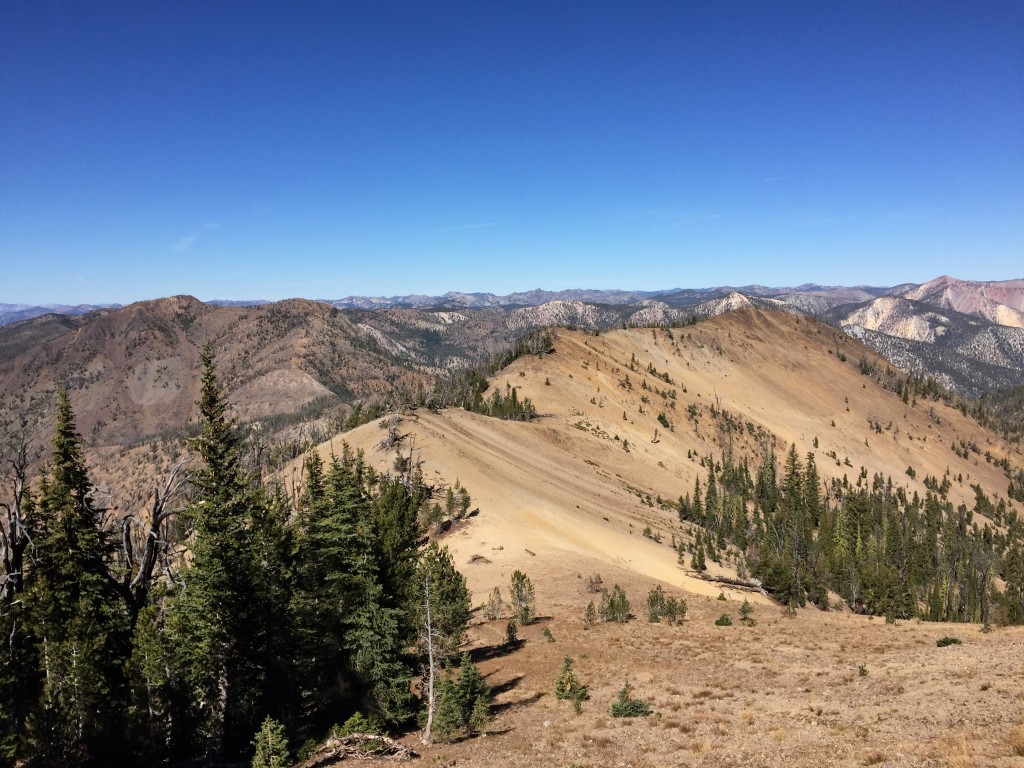 Looking back down the North Ridge from near the top of the last step.

We had hoped to also climb Red Peak, but found that it was too far away given the shortness of October days. Having climbed Murphy Peak on the way out, we decided to bypass it on the return trip. We followed the ridge back to the base of Murphy and then traversed across its South Slopes to a saddle which sits just above Thunder Mountain Road. This route was 4.0 miles long, lost 1,778 feet of elevation and gained 384 feet of elevation. If you are NOT interested in climbing Murphy Peak, this is the best way to reach Red Peak Benchmark. The traverse was a bit over a mile long and only gained about 200 feet. The footing varied and was at its most treacherous the last 200 yards before the saddle. 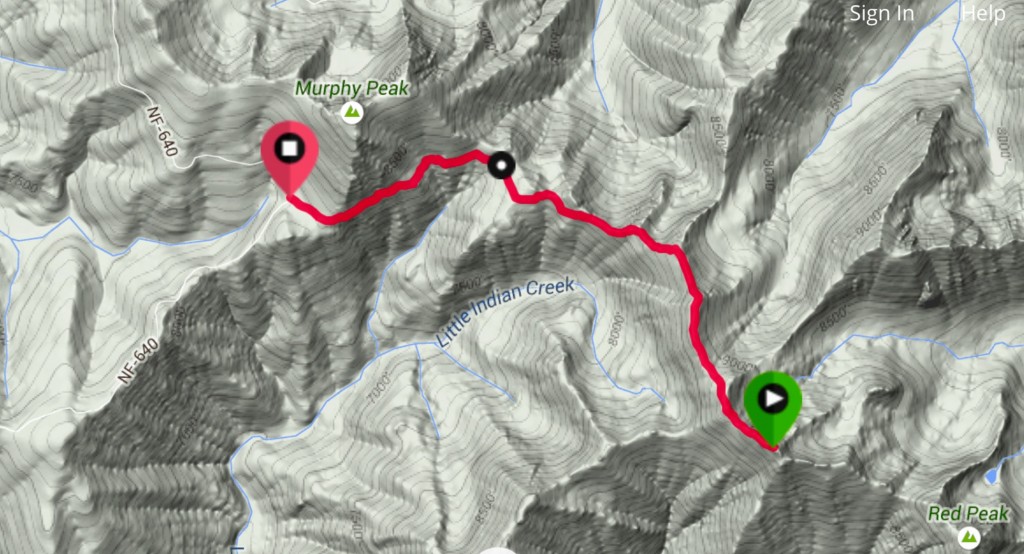 My GPS track for the return trip. 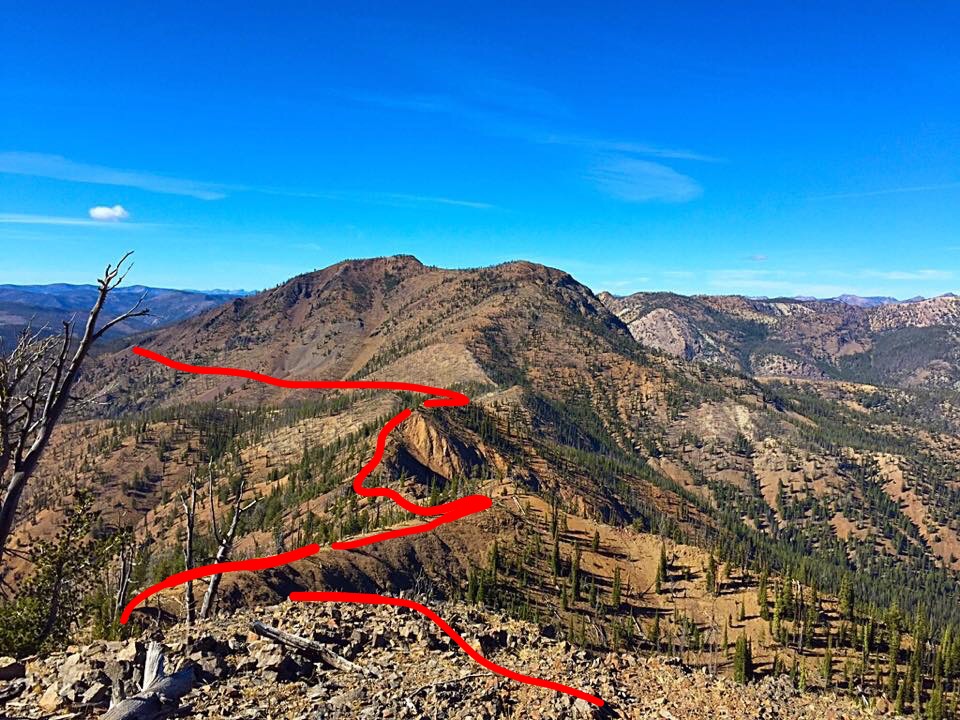 The approximate line of our hike showing much of the ridge walk and the traverse across Murphy Peak. 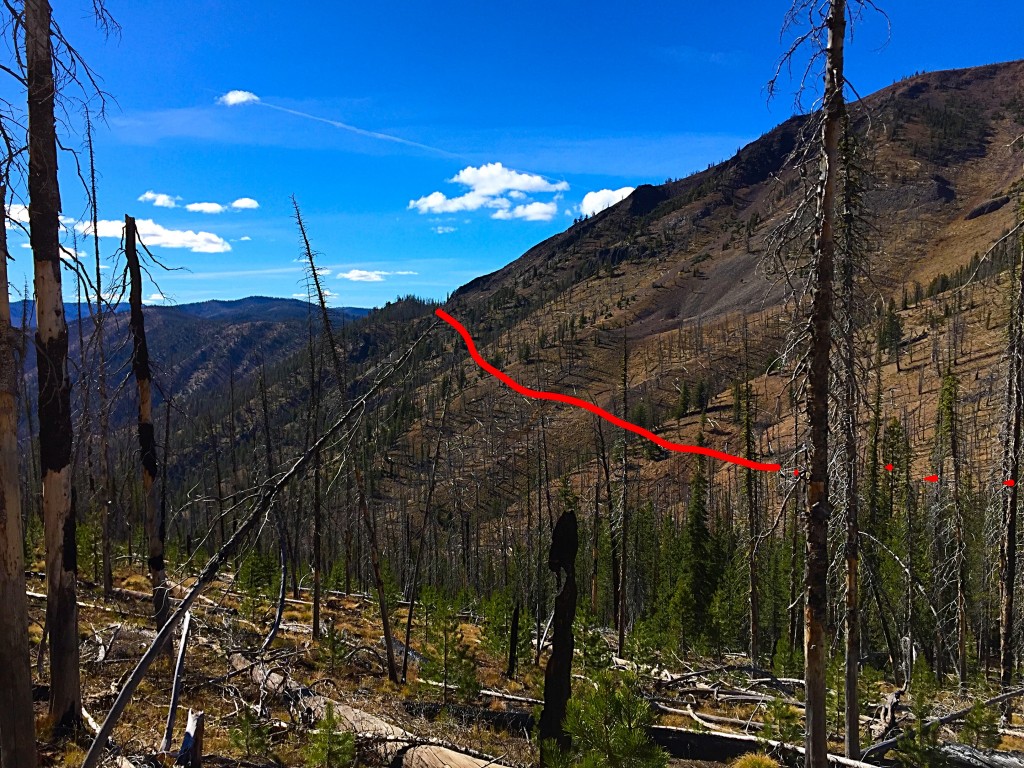 A closer view of the traverse.