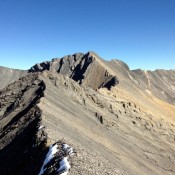 Climbing and access information for this peak is on Page 278 of the book. Also, see Wes Collin’s article on The Lost River Traverse in the Climbing History Section.

No Regret Peak is located in the Lost River Mountain Range, northeast of Donaldson Peak and northwest of Mount Breitenbach. No Regret Peak is seldom climbed since it lacks 300 feet of prominence. Therefore, it is often ignored by those seeking to climb all of Idaho’s 11ers.

I know that Rick Baugher, Chuck Ferguson, Wes Collins and Margo Mandella have climbed it (see trip reports below). Wes Collins and at least 4 other climbers climbed No Regret while traversing the Lost River Range Crest between 12ers. For them, No Regret was simply an obstacle to pass over on the traverse. Margo Mandella and her climbing partner climbed the peak via its Southeast Face. Undoubtedly, a few others have reached its highest point and numerous others have tried.

Given the difficulties in reaching this summit, I consider it to be one of the best prizes for Idaho climbers. The fact that the ridge to Mount Breitenbach only drops 272 feet is irrelevant. This is a great peak! USGS Leatherman Peak 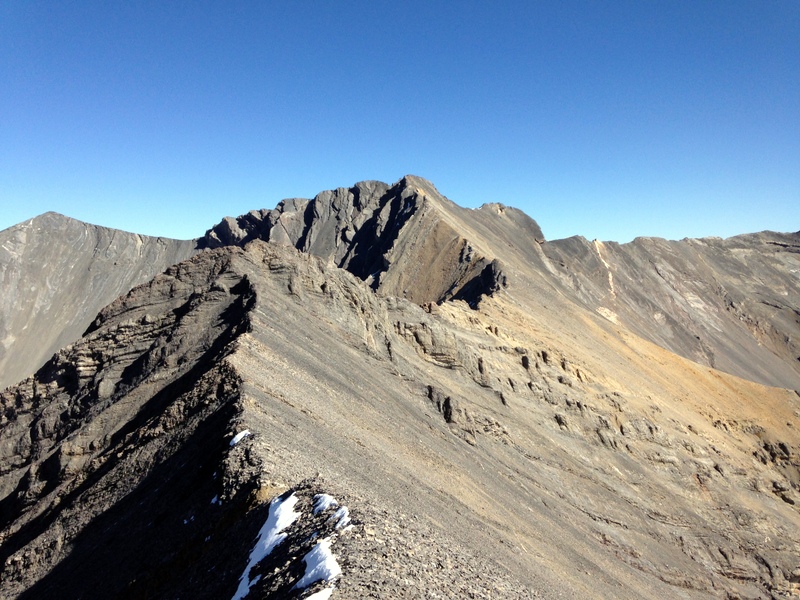 No Regret Peak as viewed from the summit of Donaldson Peak.

Additionally, I have crossed half of the ridge reaching the high point between the two peaks. When I asked Wes Collins about the ridge, he indicated that it was not a nice ridge walk. In the half of the ridge that I crossed, I found that the ridge obstacles were not difficult, but the last half of the ridge is more complicated. It looked like it would be very time consuming and require me to drop down off the ridge in places. 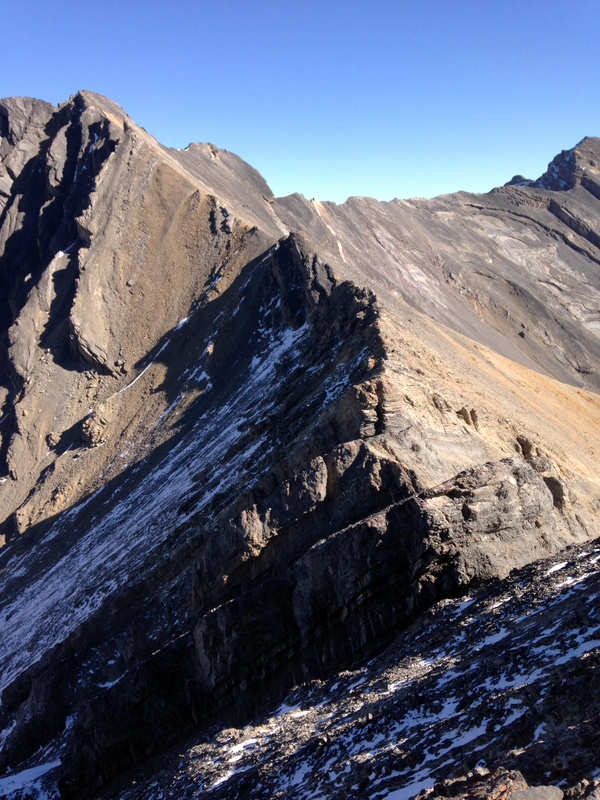 This photo shows the second half of the ridge traverse from Donaldson Peak to No Regret Peak as viewed from the high point between the two peaks.

Down-climbing Donaldson Peak’s Northeast Ridge is not the easiest task, as the upper ridge is comprised of steep slabs covered by loose scree. It’s a Class 3 descent that takes some care. 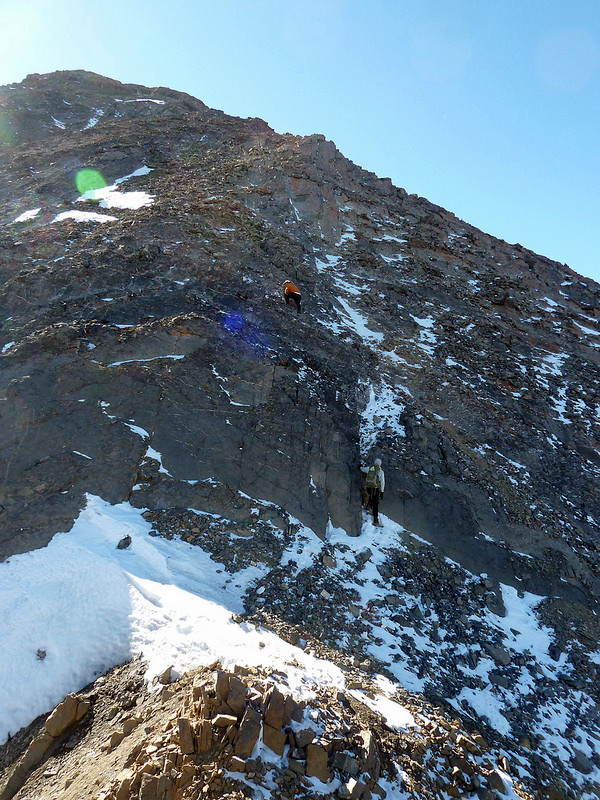 Based on my past experience and discussions with others, I believe that the best way to summit the peak is via Jones Creek and the Southeast Face. Start early. If you can hit the route just right, the water level in Jones Creek should be low and there should still be some snow in the upper basin to ascend. Be aware that Jones Creek is a difficult drainage to traverse and the upper basin is very unstable. Class 3. 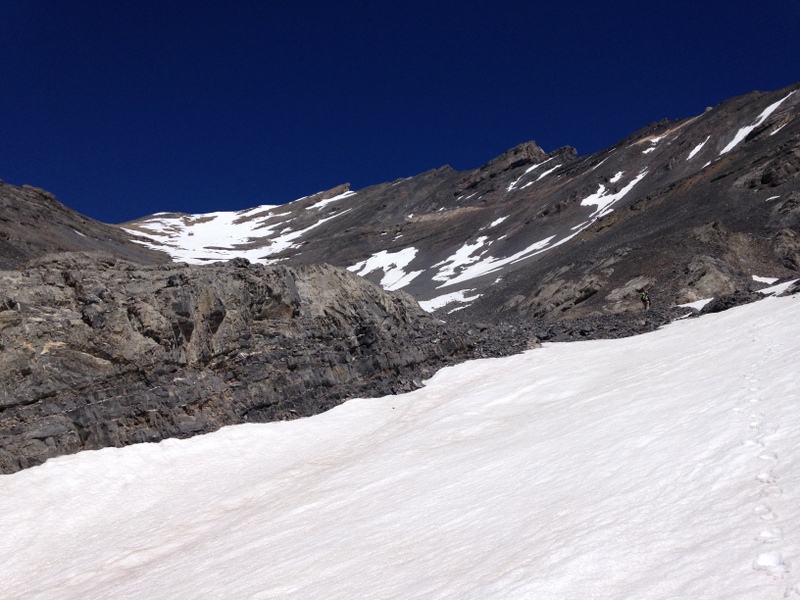 Looking up the South Face of No Regret Peak from Upper Jones Creek. The summit is the high point in this photo.

See Wes Collins’ article on his traverse of the range from Mount Borah to Lost River Mountain.

Rick Baugher and Chuck Ferguson missed a first ascent on this peak as they found a small cairn on the summit. Here are Rick’s notes from his climb:

Drove to the mouth of Jones Creek with Chuck and David Ferguson. As usual, the rubbly stream bed required many crossings. Running shoes worked well for this. At around 9,500 feet, there appears to be perennial snow. In this steep, narrow gully the snow is covered and protected by a layer of rockfall. Continue up into a cirque, over and around small cliff bands, then up a ledge. Do a short scramble on the West Ridge to reach the summit of No Regret Peak. We found a small cairn in place, but no register. It didn’t appear old. We left a register. Windy as usual. We descended our ascent route. We found good brachiopod fossils in the Paleozoic limestone of the upper cirque.

Margo Mandella and her climbing partner actually summitted this peak in error. They were attempting to climb Mount Breitenbach. Instead, from Pete Creek, they “climbed toward the saddle to the northwest,” as it says in the book, but too soon (i.e., northeast of Peak 10039) and ended up in the Jones Creek drainage. From there, they continued to the No Regret’s South Face and climbed very steep and extremely loose scree, working their way up to a notch, which is next to the summit. While Margo rested at the notch, her partner had retrieved and opened the summit register to find a piece of paper with “No Regret Peak” written on it. He said, “You’re not going to believe this….”

As Margo recalls: I remember wondering at one time if we were in the right place, but my partner seemed pretty confident, and we hadn’t had any route issues on our other climbs. We were climbing the 12ers in the late 1990s/early 2000s and, for the most part, we would read the book and have the route in our heads. There were no handheld GPS or cell phones, just maps. But we were pretty comfortable in the Lost River Range as most routes were from the south, used ridges and were pretty straight forward, so generally we would not carry a map. However, we would scout the access ahead of time as most of the 12ers we would start climbing in the dark.

Margo continues: I do remember the climb up the face like it was yesterday…that was the most difficult scrambling I have ever done. It was like a deep sea of moving scree and we just kept climbing, rather crawling, the entire time, trying to reach any rock that might stay put for just a second until we moved again. It was nothing short of arduous and I remember we were out for a very long time that day. After the shock of discovering we were on the wrong peak, and an epic scree-ski back down the face, we spent the way down trying to figure out what we had done wrong. We suspected it was probably the premature saddle, which we verified when we got back to the car and re-read the book’s directions. 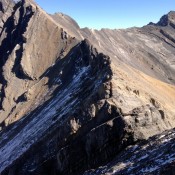 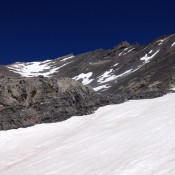