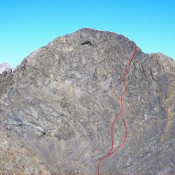 Climbing and access information for this peak is on Pages 308-309 of the book. The book only lists one route. This page has additional route information for the Baugher route and a traverse from Diamond Peak by Wes Collins. Additionally, Derek Percoski and Daniel Todd climbed the peak’s South Ridge on September 4, 2019. Derek’s route report is set out below. Updated September 2019

Although The Riddler is only a few feet shorter than towering Bell Mountain, it is overshadowed by massive Diamond Peak and seems a lesser mountain to those who have not climbed it. Nevertheless, The Riddler is a spectacular peak and is one of the most difficult Idaho peaks to summit. As a result, only a few people have climbed this hidden gem.

Rick Baugher made the first ascent in 1990, pioneering a route up the South Face. In 2002, Wes Collins made the first ascent of North Ridge by traversing over from Diamond Peak. Climbing the peak via the South Face requires a 16-mile round trip which gains over 4,700 feet of elevation.  Chuck and David Ferguson summitted via the Southeast Face Route in October 1996. Rick Baugher believes this was the second ascent.

On this page, you will find route photos from my climb and a trip report from a climb by Judi Steciak and Carl Hamke. Also, use the link below to view the well-documented trip reports from John Platt and Larry Prescott. The register was gone when I climbed the peak in 2015. Fortunately, Judi and Carl’s report (below) documents what was in the register when they climbed the peak. USGS Diamond Peak 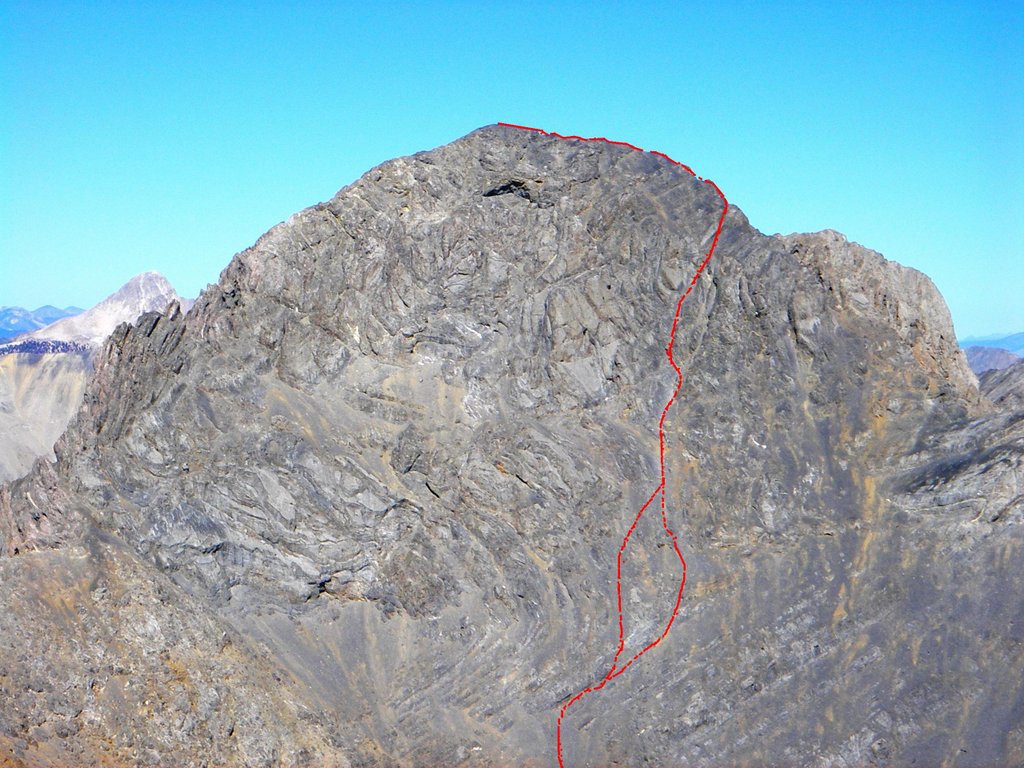 This photo of the South Face by Judi Steciak accurately shows the Southeast Face Route pioneered by Rick Baugher in 1990. The photo was taken from Big Boy Peak. Please note that when you are at the base of the face, the perspective is much different. It takes a bit of study and experience to find the route through the confusing face from below.

Rick Baugher’s pioneering route on the Southeast Face is, in my mind, a crowning achievement. While the route line can be divined from the summit of Big Boy Peak, it is not visible from the base of the complicated, steep, rugged face. Finding the route was an impressive accomplishment as was making the first ascent. 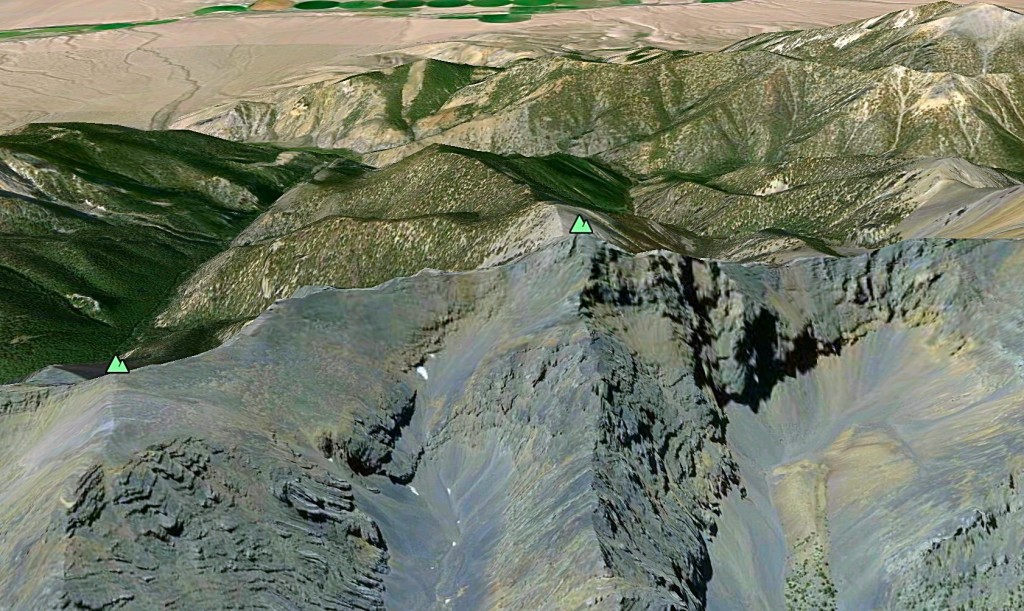 A Google Earth image showing the Southeast Face of The Riddler. 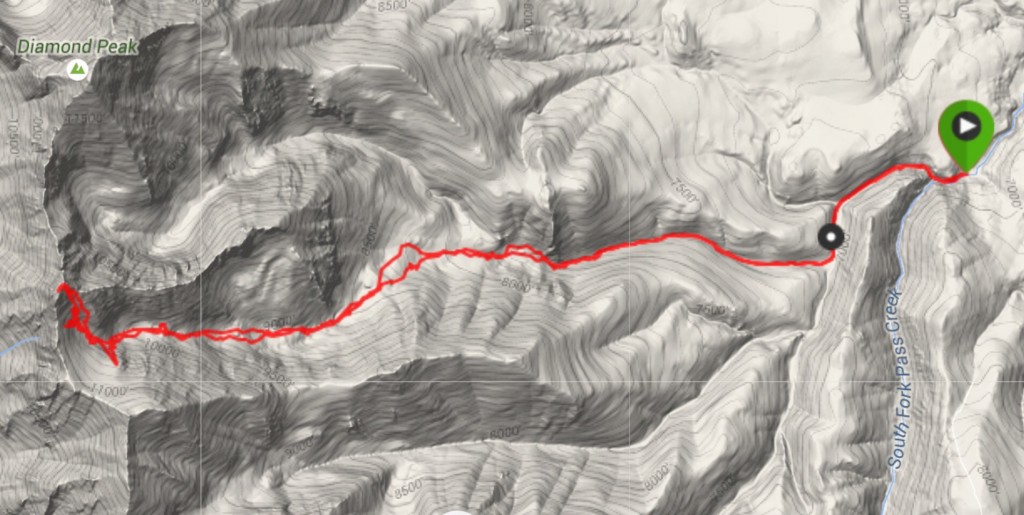 This is my GPS Track for The Riddler. Note that my GPS measured the route at 19.6 miles. My iPhone measured 16.5 miles. Larry Prescott’s GPS measured 16.0 miles. In any event, it’s a long jaunt. 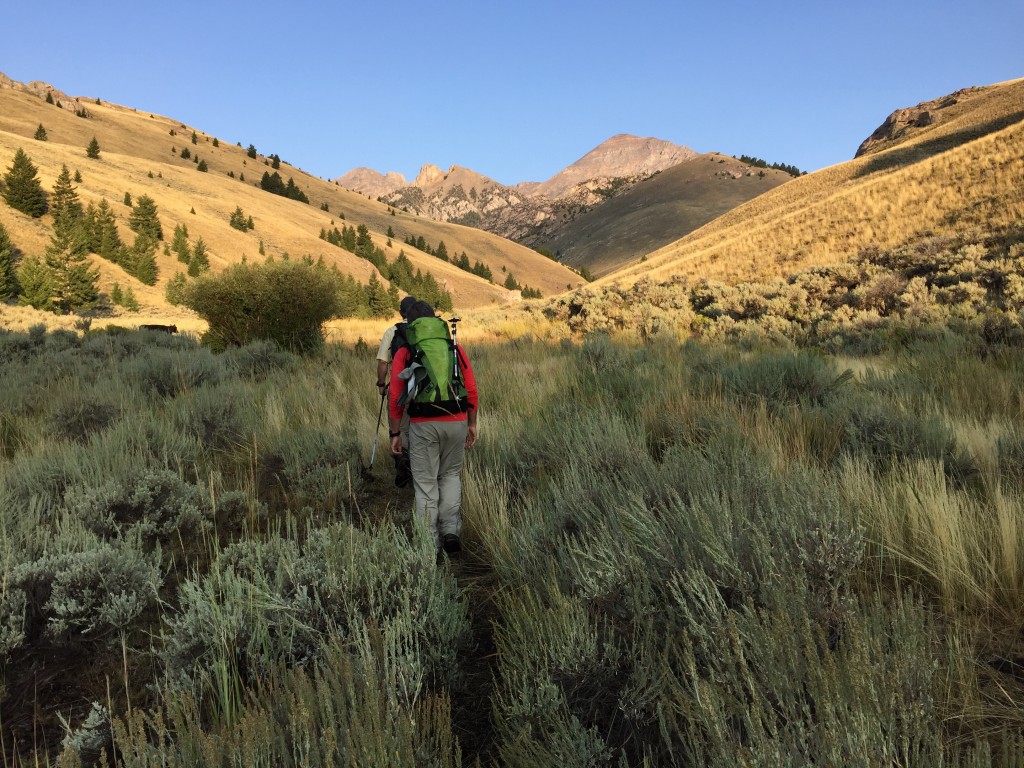 From the end of the Pass Creek Road, an ATV trail continues up South Fork Pass Creek. Follow it for roughly 1.5 miles and then turn into the drainage that leads to the Southeast Face. Cattle trails run up this valley until it steepens. 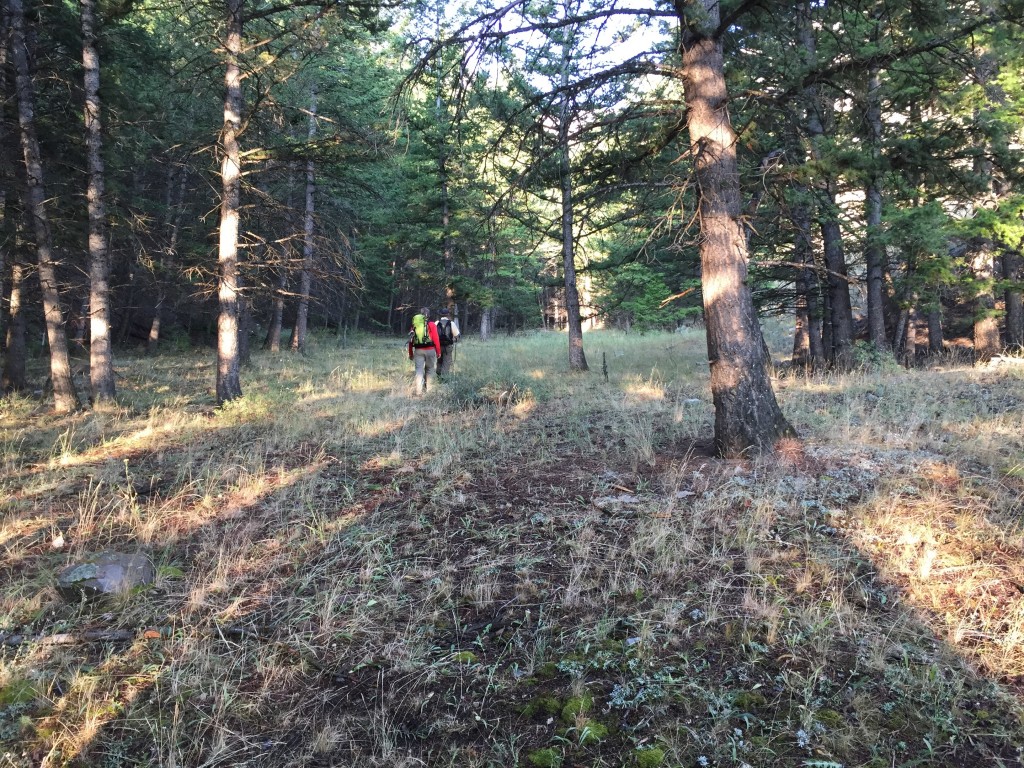 The drainage is surprisingly park-like for much of its distance. 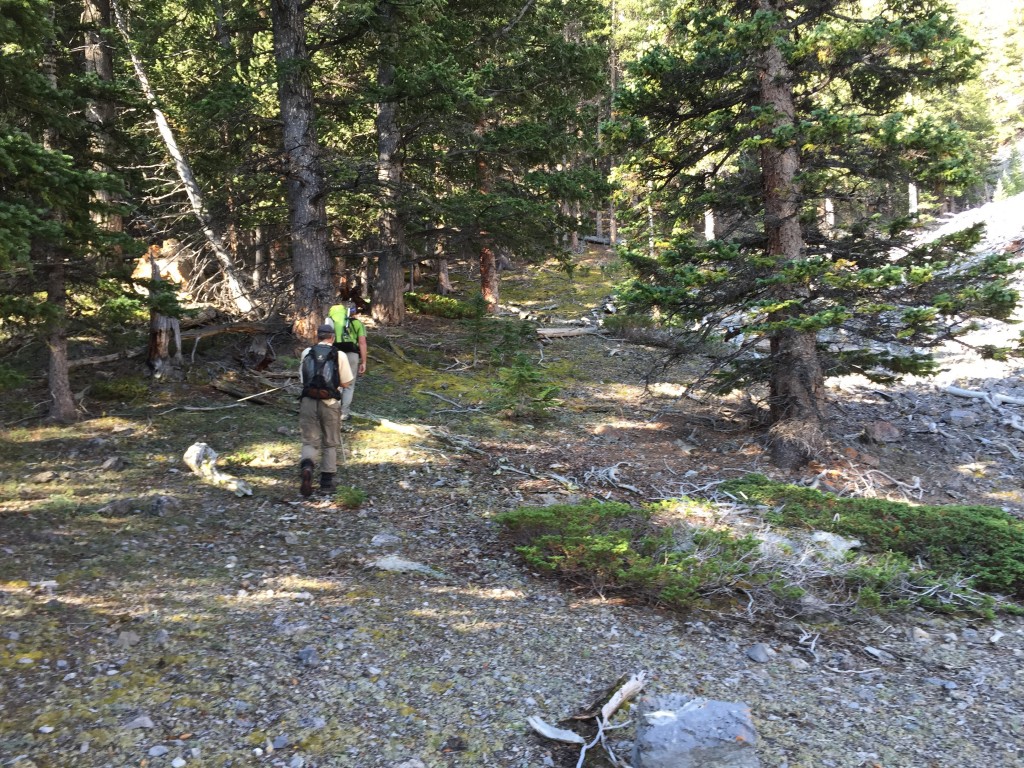 In some ways, the valley resembles a braided river since it does not have a well-defined stream bed. Instead, you will find that your route meanders between draws and steep slopes. 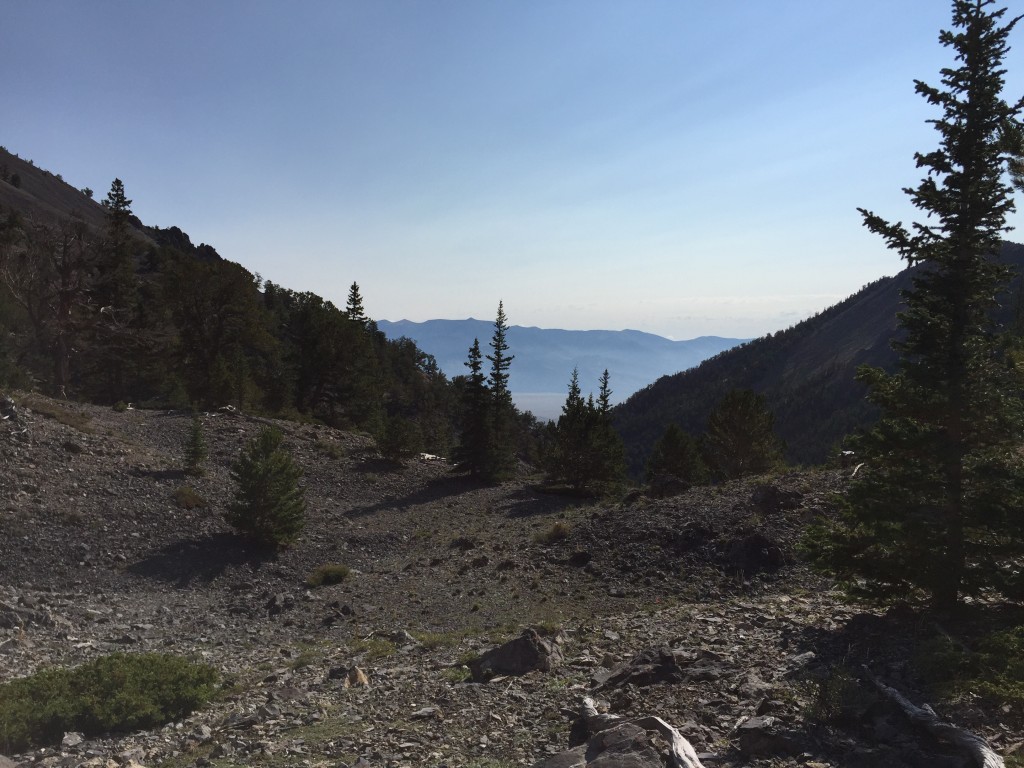 The trees thin out around 9,700 feet. This photo looks back down the drainage. 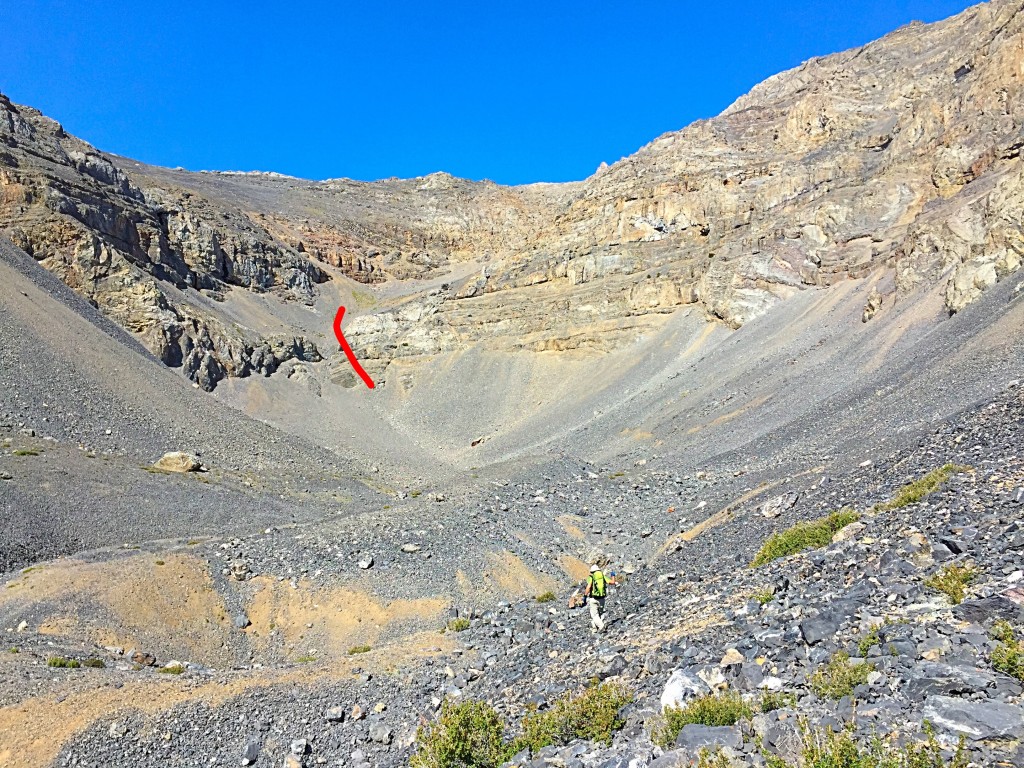 From treeline, you enter a world of talus and broken cliffs. This photo shows the long slog to the upper basin. 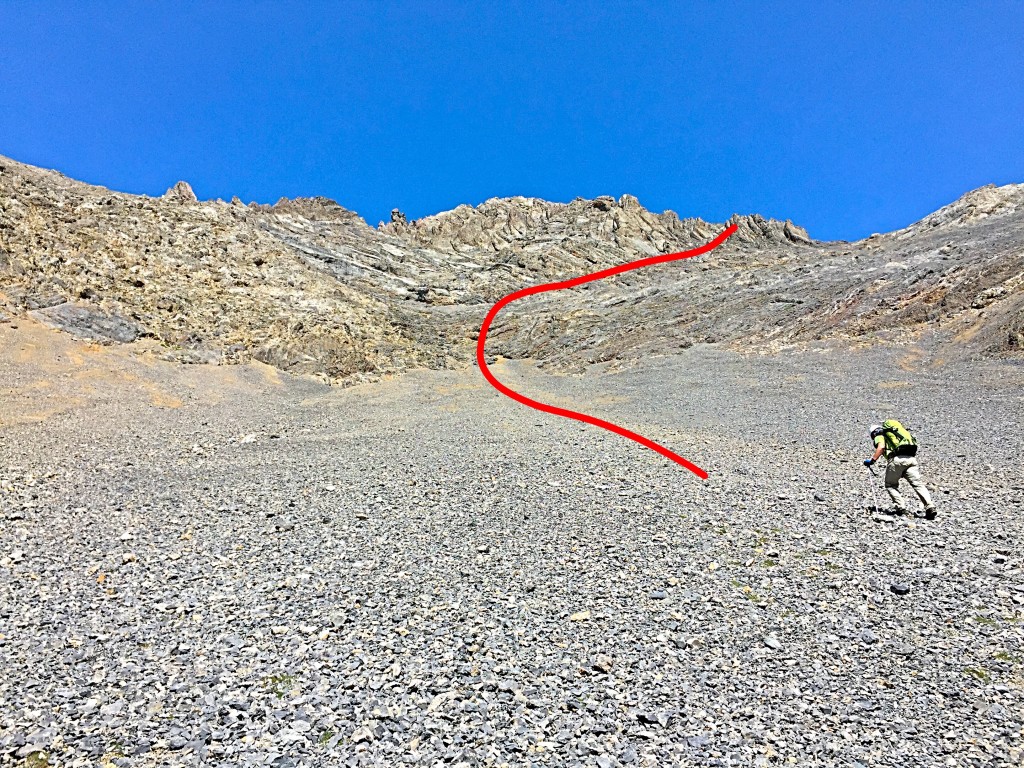 Once through the cliff band shown in the previous photo, my route follows the red line which, in the lower section, is to the right of the original route. 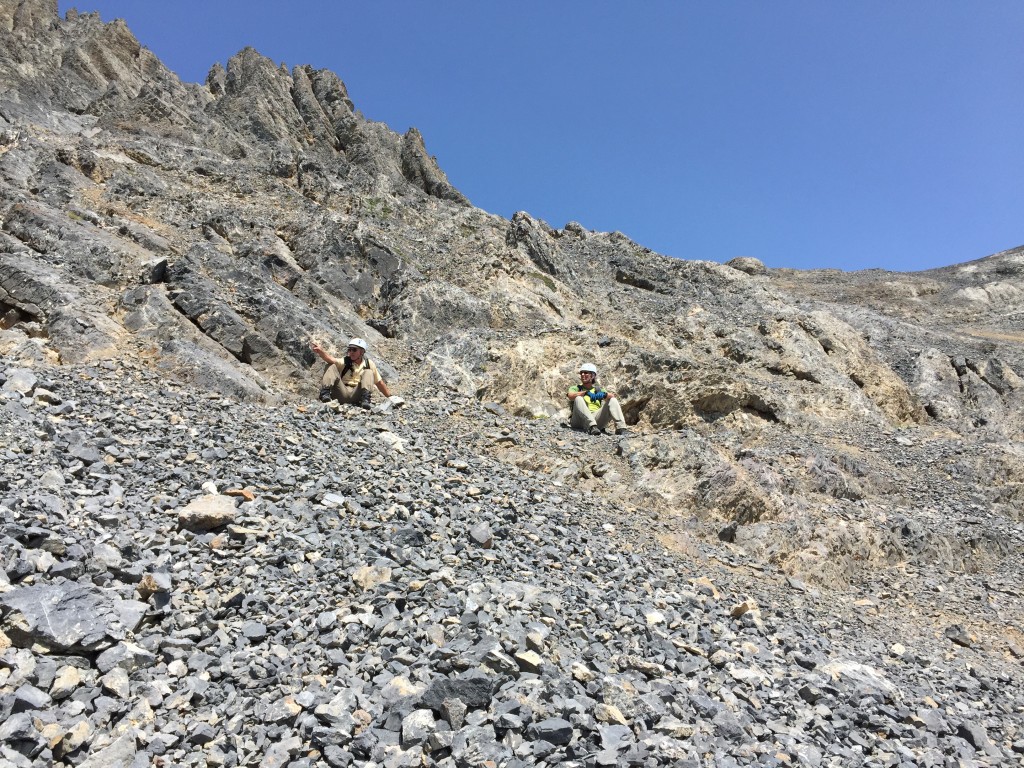 Taking a break at the point where the route leaves the talus and starts climbing talus-covered slabs. 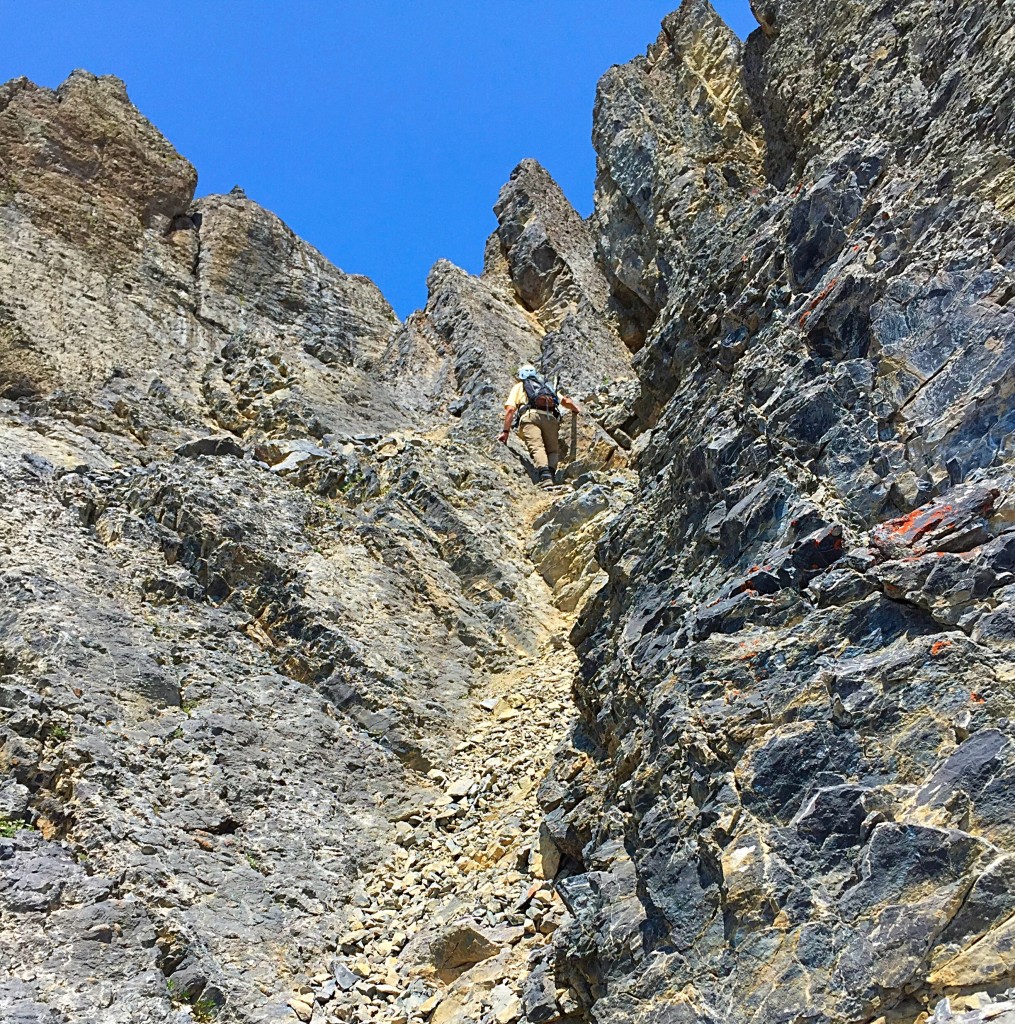 Larry Prescott mid-way up the gully. He is getting ready to move to his left where the rock is slightly less fractured. 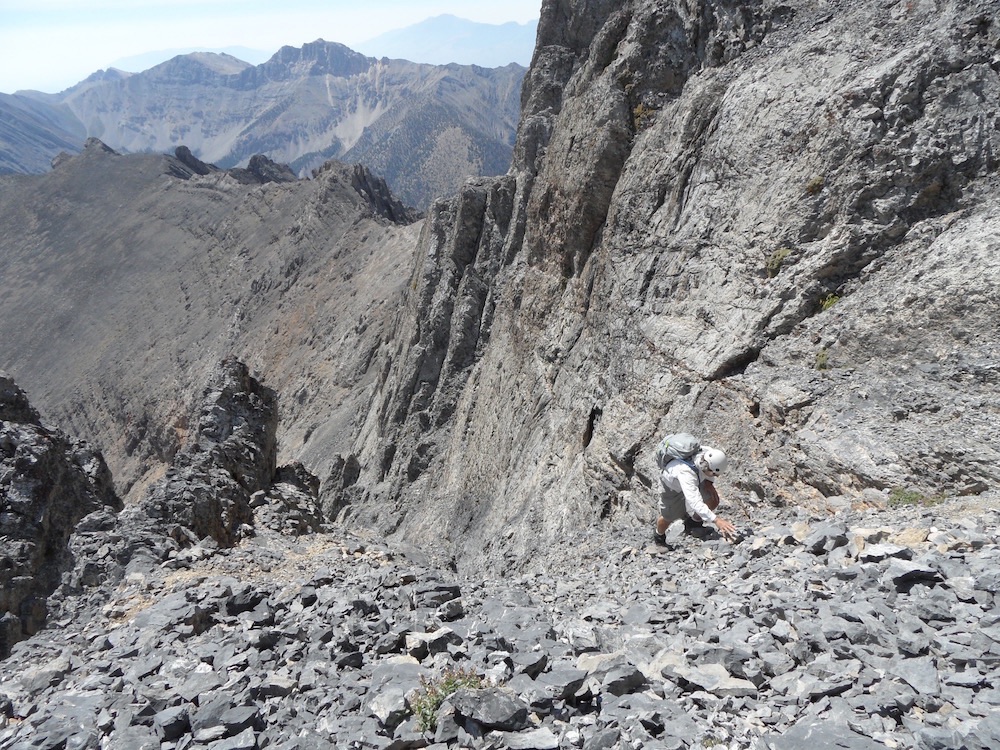 Near the top of the gully. John Platt Photo 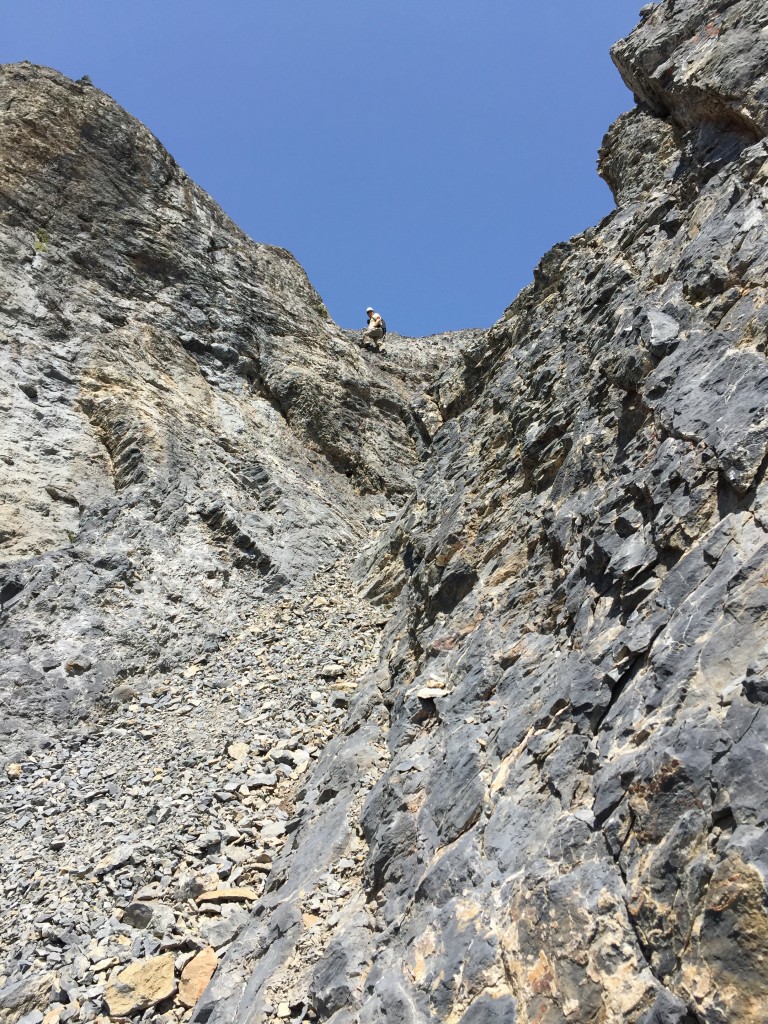 Leaving the top of the gully. 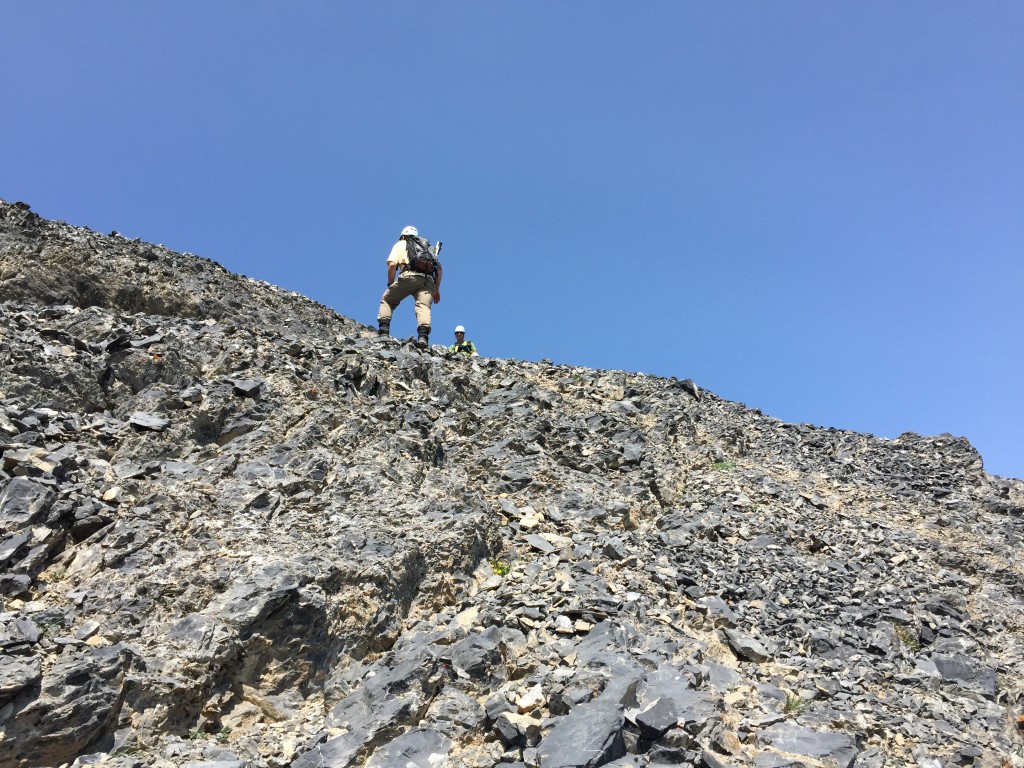 Larry Prescott ascending from the top of the gully to the summit ridge. 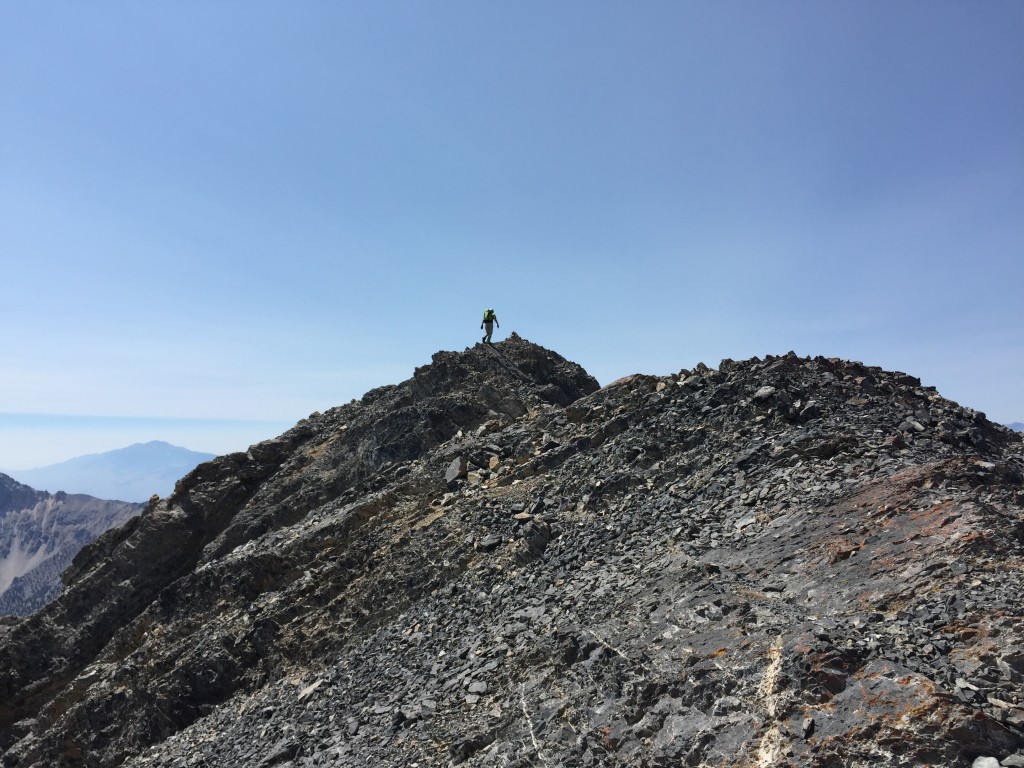 John Platt on the summit of The Riddler. 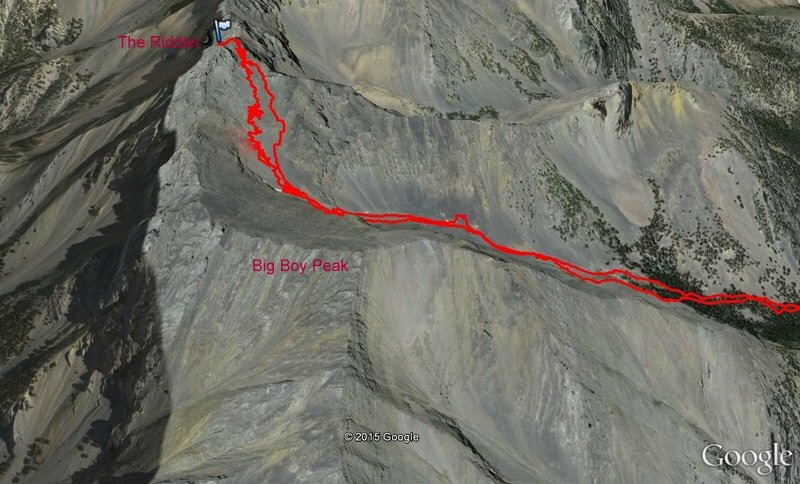 My GPS track superimposed over a Google Earth image. 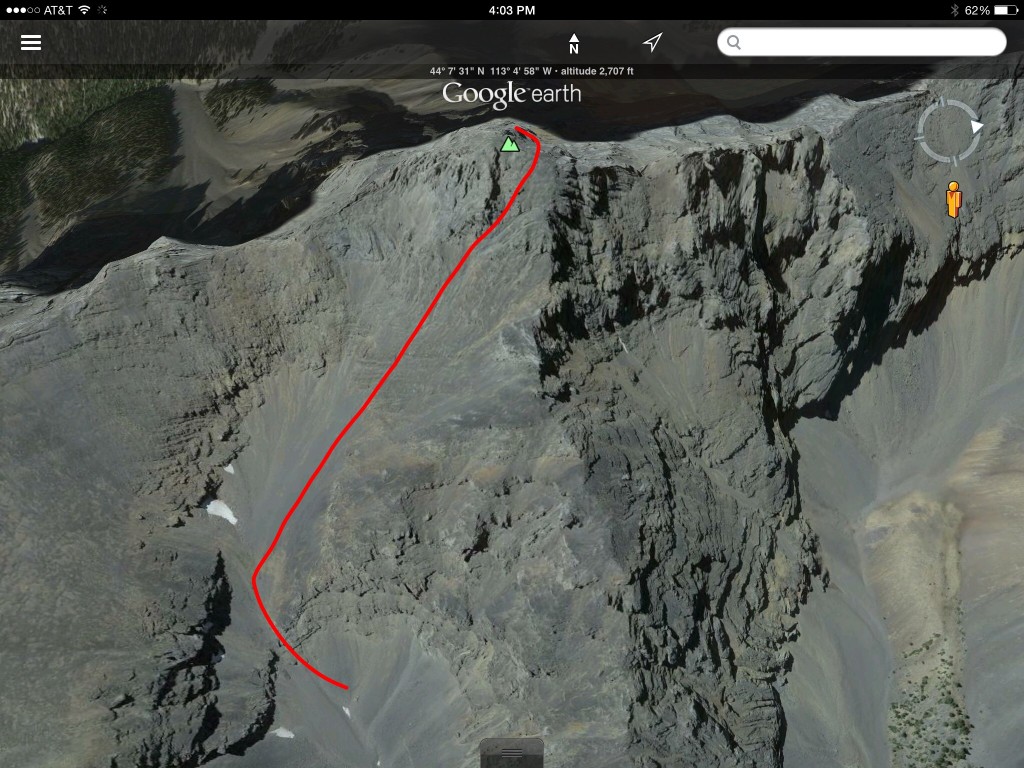 The route drawn on a Google Earth image.

Judi Steciak provided the following information and photos which include 3 route photos and help flesh out this interesting peak’s history.

We followed Rick Baugher’s route on The Riddler. Attached is a picture taken from Big Boy Peak. This picture looks like it is taken from the same place as the one in your book. We happened to do the climb in early July after a big snow year and we were pleasantly surprised to be able to thread a snow climb from low on the mountain (around 10,080 feet) all the way past the crux, where we left our ice axes and crampons, followed by a short Class 3 move to a short Class 2 ridge walk to the summit. When the route is free of snow, the Class 4 crux is probably near the top of the final couloir where the snow was the steepest. We never used the rope that we hauled all the way up there. We felt guilty because we did not suffer more.

In 2005, Rob Landis left a note saying that he climbed the face directly to the summit and found Rick Baugher’s note from 15 years earlier. In 2009, Nathan Basford and Jody Butler said they traversed from Diamond Peak. Attached are the pictures we took of these summit notes, sorry that Carl’s hands are in the way of some details. 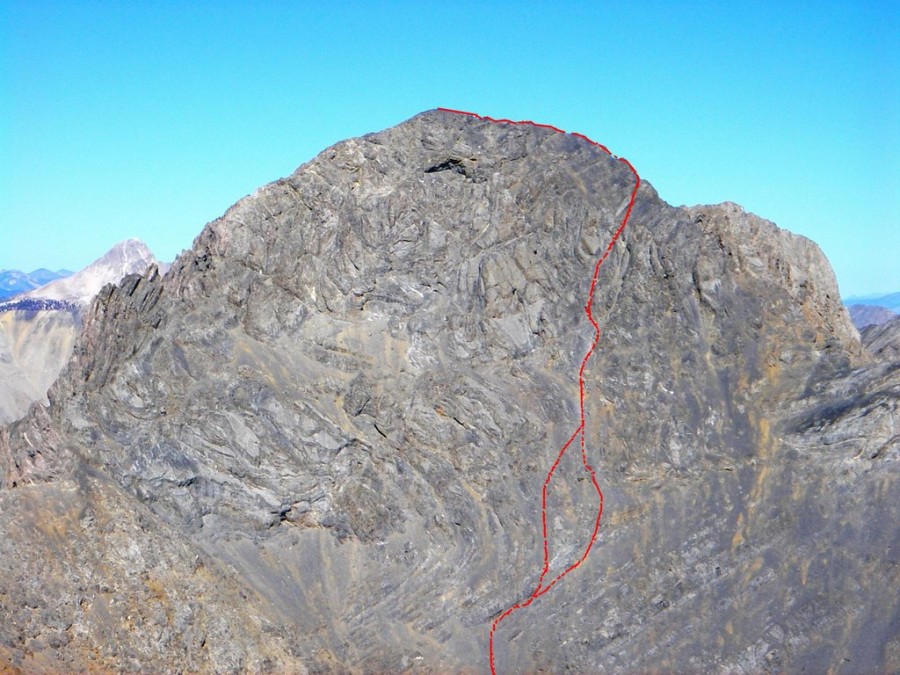 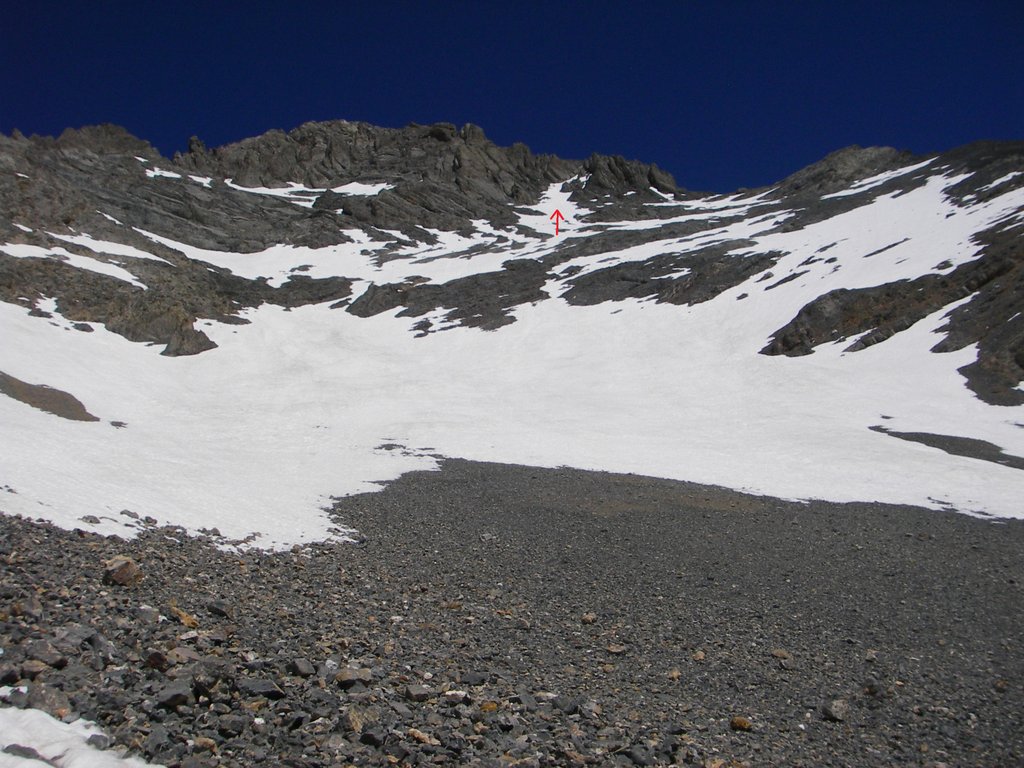 Looking up the route. Steciak/Hamke Photo 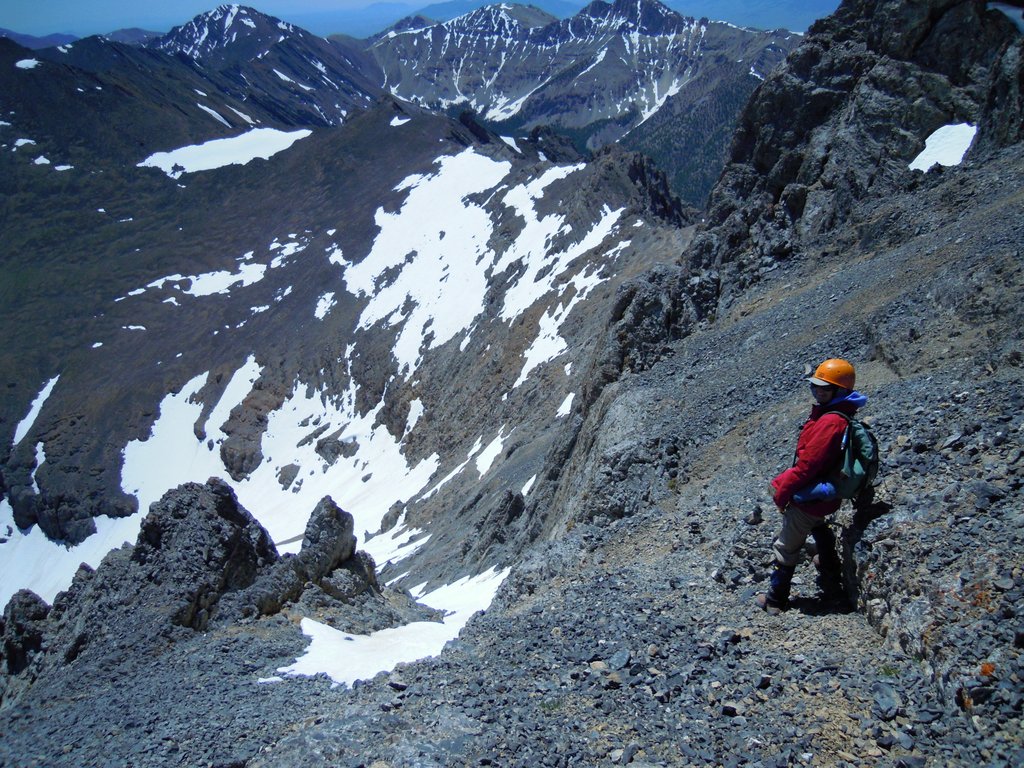 Looking down the route. Steciak/Hamke Photo 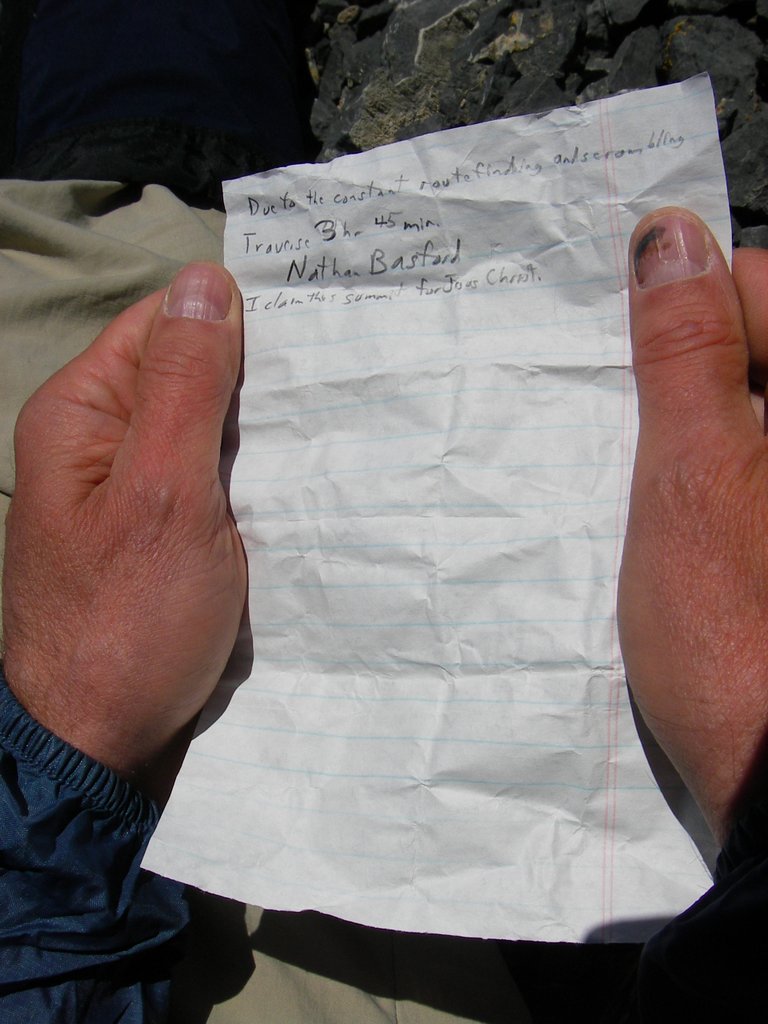 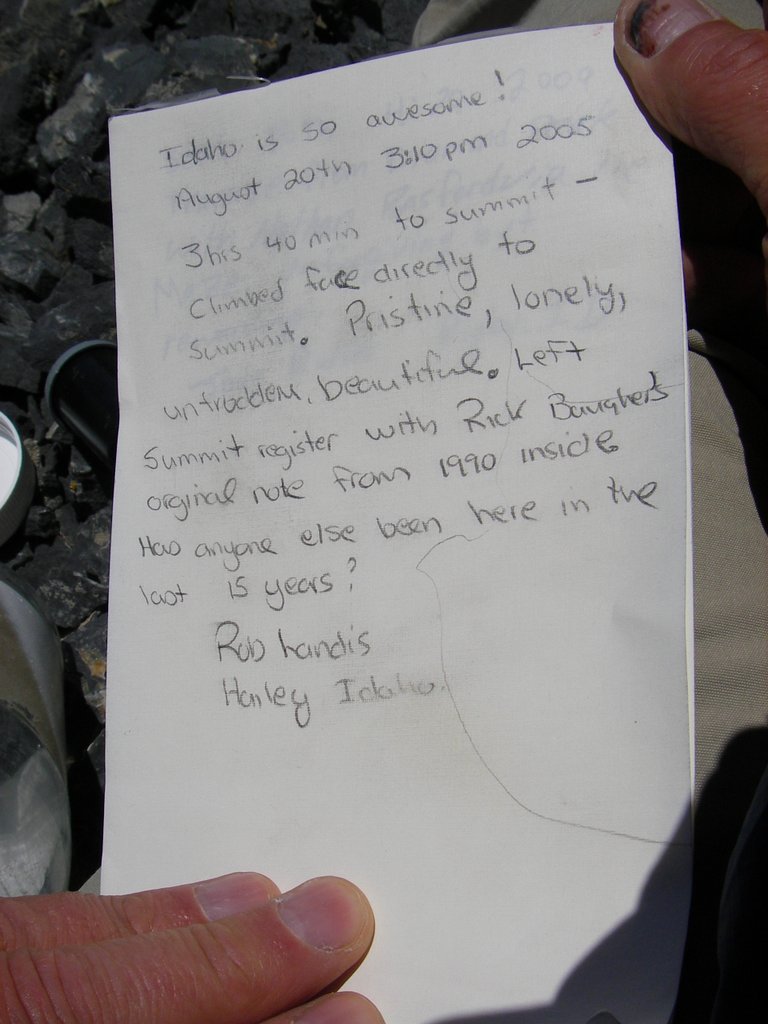 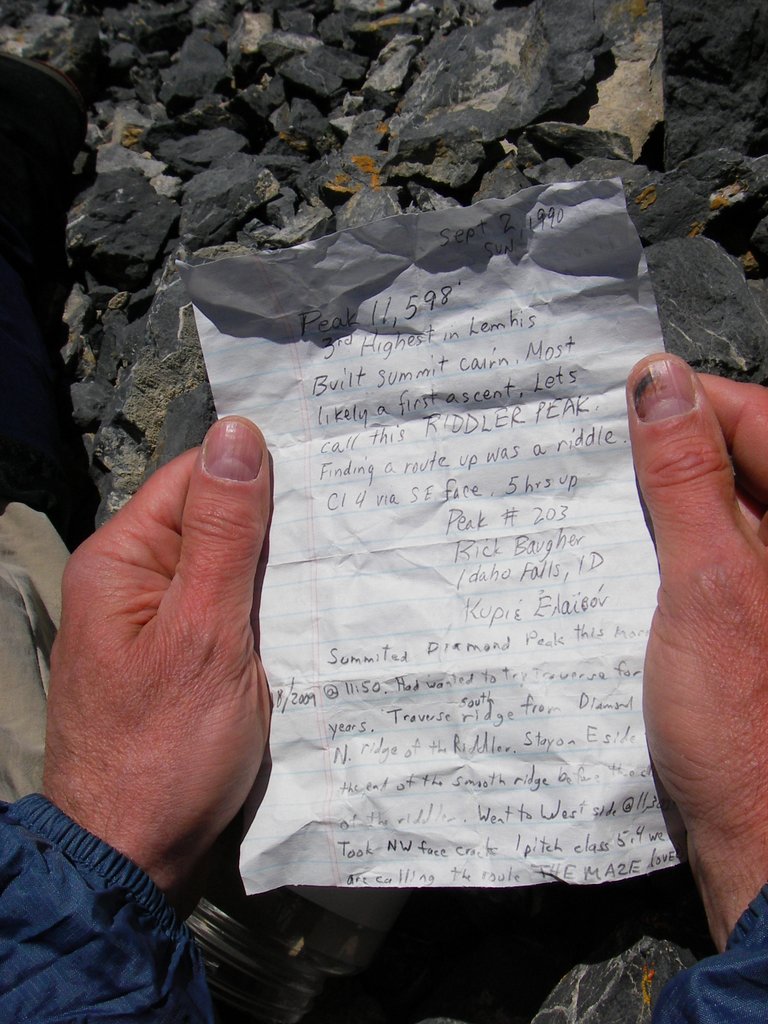 As mentioned above, Wes Collins made the first ascent of the peak’s North Ridge. The photo above references the second ascent of this route by Nathan Basford and Jody Butler in 2009. Jody’s register entry refers to the Maze. The ridge this route follows is shown in the photo below. Wes Collins told me the following about the route:

“I climbed The Riddler in 2001 or 2002 but the details of some of these mountains have gotten a little fuzzy. I remember one part of that traverse very clearly. Shortly after passing the saddle from Diamond and starting up the false summit block, I spotted a really nice 2″ crack on the north side of the peak leading straight up the first or second big obstacle. It seemed tall then, maybe 60 feet but was probably only half that. It was fairly steep, probably Class 5+ and tremendously exposed but too tempting to pass up. It was kind of a stretch just to reach the crack from the last good ledge and I probably wouldn’t have given that step or the crack a second thought except for the drop on the face below (100 feet, maybe more). Once I got onto the crack, the climbing was easy and very solid. I was on easier ground in no time and from there to the top was a piece of cake. Before trying the crack, I scrambled over to the west side of the ridge. The route looked easier on that side but I couldn’t pass up that silly crack. Nowadays I wouldn’t give that a second glance without a belay.” 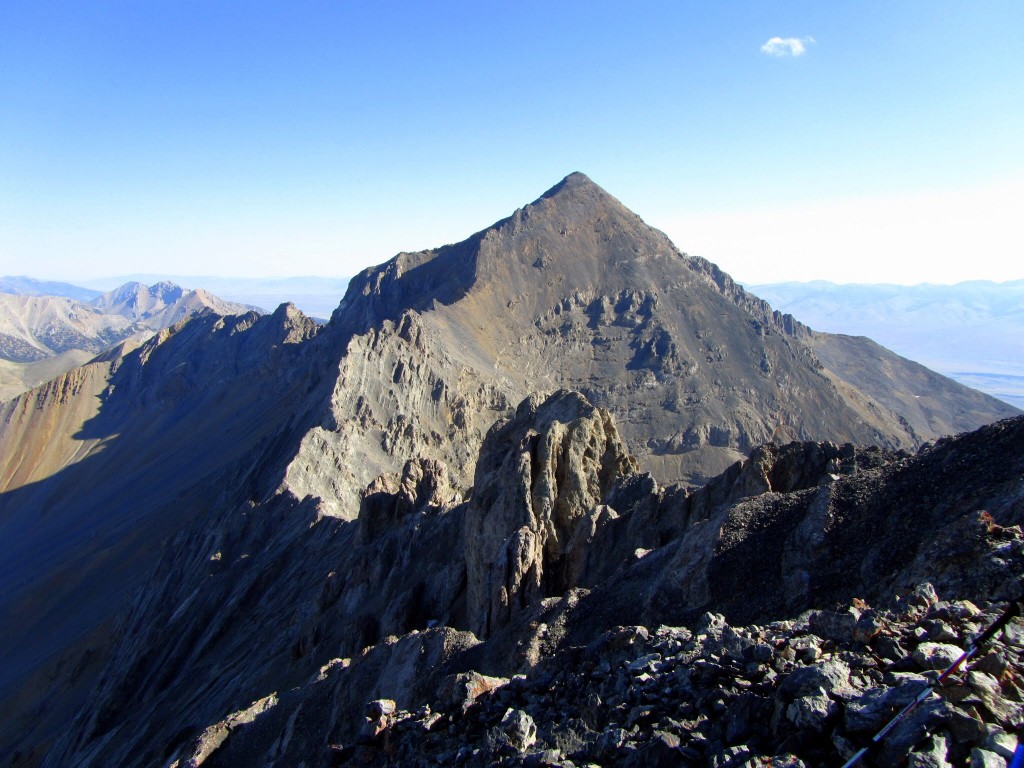 Looking from The Riddler to Diamond Peak. This ridge has been traversed but I don’t know the details. George Reinier Photo

And one more photo from George Reinier: 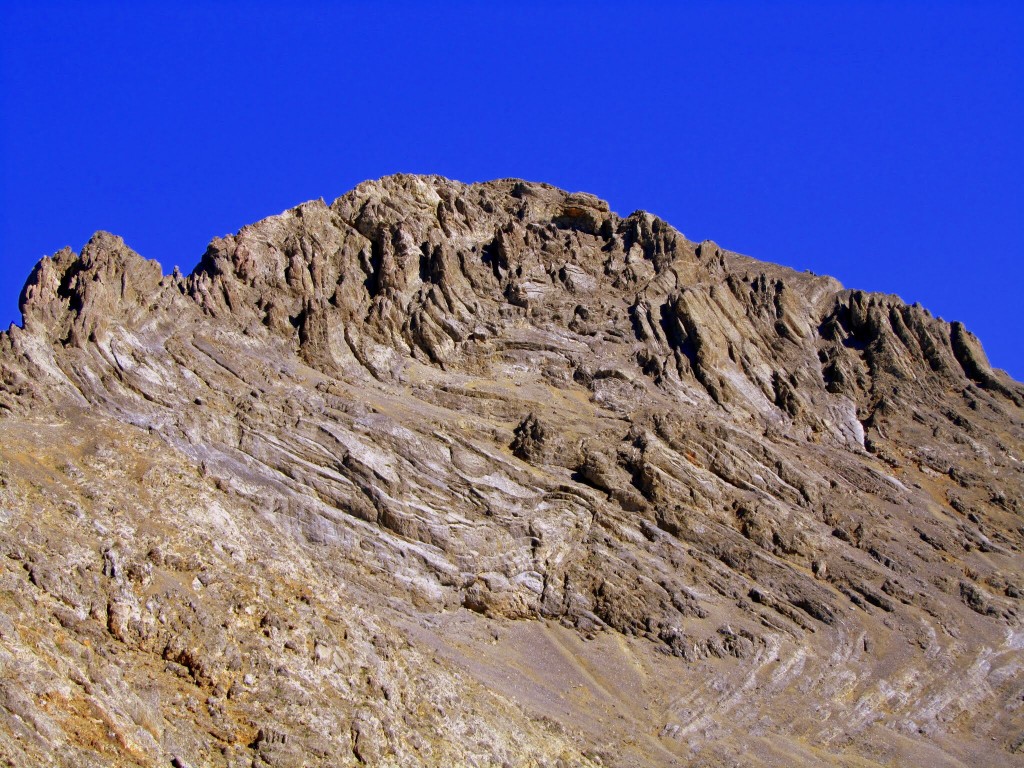 On Wednesday, Daniel Todd and I climbed The Riddler via the South Ridge. It’s possible that Wes Collins took this route already (see Photo #1). Not sure if he made it to Big Boy Peak and, if so, did he climb down The Riddler’s South Ridge? After traversing from Diamond Peak and ascending the North Ridge, that would have been small potatoes for him. The South Ridge might be the easiest way to climb that mountain. Eventually someone will do both and make a comparison. I’d still like to do Baugher’s route someday, since I feel like I’m missing out on an adventure there.

I’ll give you a little backstory since I figure you’d be interested. The plan was to start in Bunting Canyon, climb Shoshone John Peak, then Big Boy Peak, then drop down to Baugher’s route on The Riddler. As we descended Big Boy Peak, it looked like we could stay higher, then either traverse into Baugher’s route or possibly climb the left side of the face. After skirting around an impassable section of the South Ridge, we noticed our best option was probably to gain the South Ridge again. From a distance, it didn’t look doable. But, from a distance, nothing on The Riddler looks doable!

Daniel Todd and I climbed the South Ridge by traversing from Big Boy Peak (see Big Boy Peak approaches). This could be also be accessed via the same approach as the Baugher route. One obvious section of the ridge needs to be skirted  (~11,200-11,400). The worst exposure probably happens here when doing some side-hill walking above cliffs, but there are plenty of things to hold on to when you want to play it safe. Route finding was pretty straightforward—generally nothing more than turning your head to find the best option. Our technical crutch was a steep gully/chimney (Photo #2) showing Daniel Todd descending the crux. 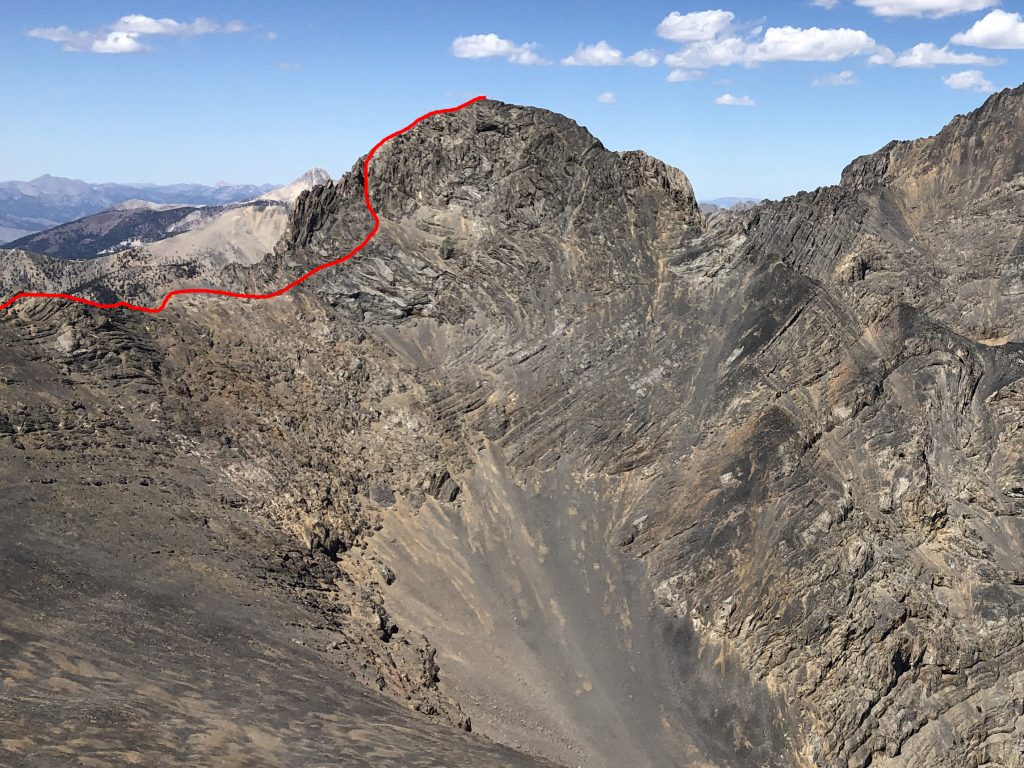 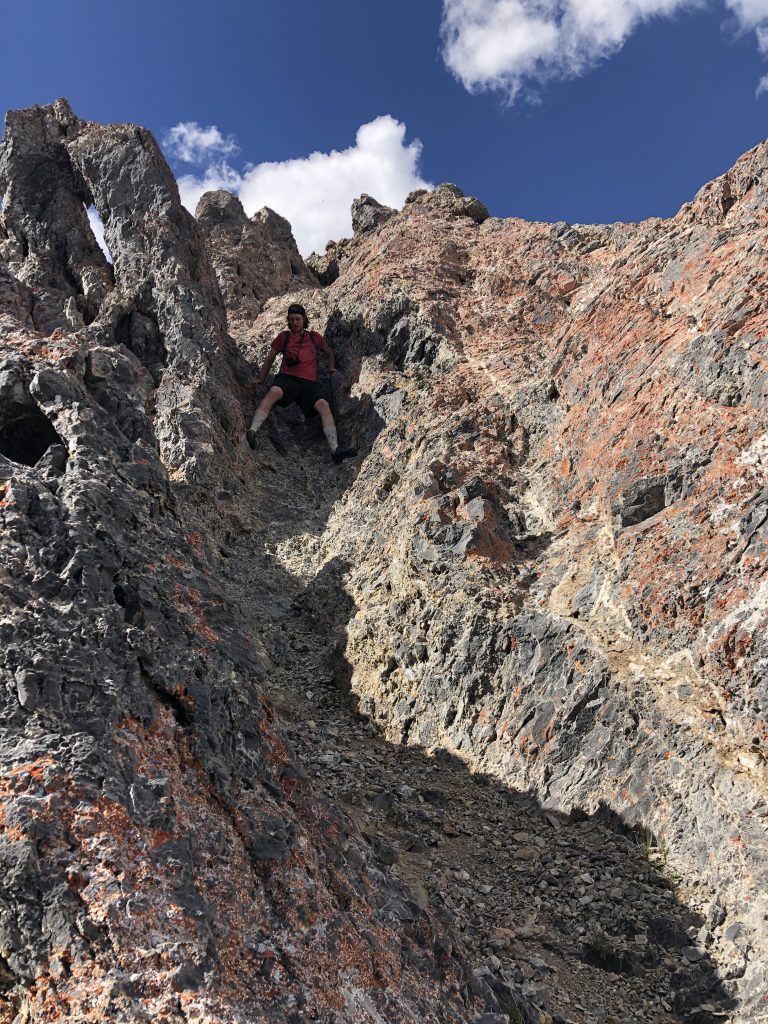 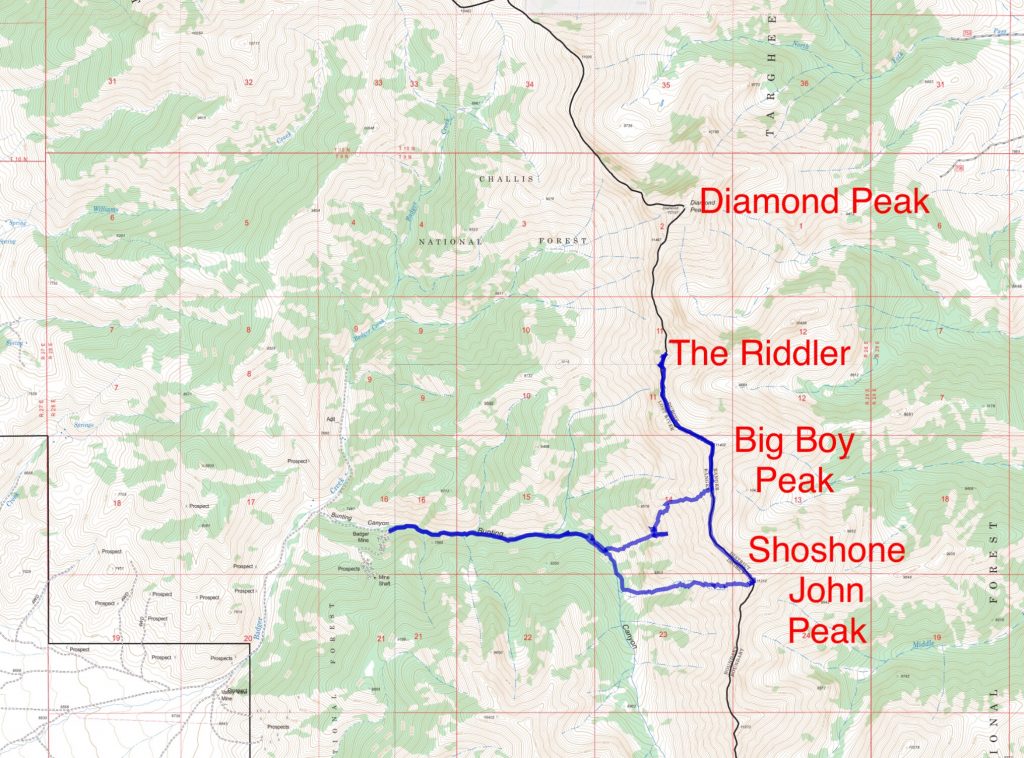