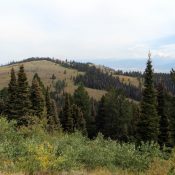 Squirrel Mountain is located on the Southeast Side of the Big Hole Mountains. The summit is located just off the boundary of Teton County and Bonneville County on the Teton County side. USGS Fourth of July Peak 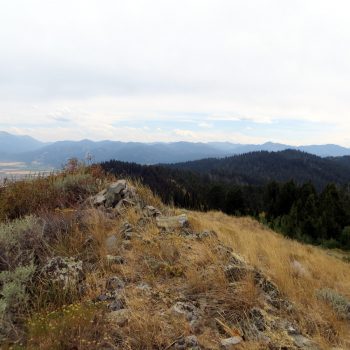 The summit is not particularly distinct and you could easily walk by it or convince yourself that there is a different high point several yards away. However, it is the location shown in the photo.

We climbed Peak 7834, Peak 7906 and Squirrel Mountain, in that order, as a loop from the east via Drake Creek, as shown in the GPS track below. However, the Grove Creek trail, a little farther north of Drake Creek, provides more direct access to Squirrel Mountain if that is your only destination. 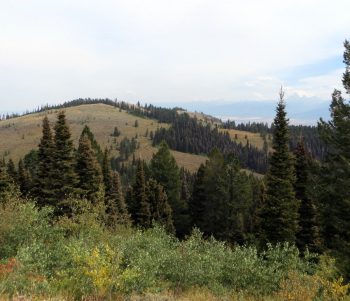 Here you will see a false trail that begins an ascent to a hill on the East Side of a fence. Avoid this spur and stay on FST-217, which traverses the hill and stays left of the fence. Proceed upward until you see what appears to be the high point (shown in the photo). The summit shown in the photo lies east of the fence. There is no cairn or register. These trails are well-used and popular.

Our 3-peak route, shown in the GPS track below, I don’t fully recommend, but I am providing the information, with tips, to help you plan a better version of this loop.

From Victor, Idaho, travel west on ID-31 to W 9000 South. Turn on W 9000 South and continue westward until you can travel no farther and park. Use FST-548 and hike westward as it turns into FST-238 until you reach the Big Hole Crest Trail/FST-217. Turn north and follow the trail to the top of the next hill. Here, you will see a short trail to the west that takes you to the cairn for the summit of Peak 7834.

Get back on FST-217 and continue to the north as the trail descends to a saddle where you will reach a junction of the Big Hole Crest Trail/FST-217 [which continues north to Squirrel Mountain] with the Corral Crest Trail/FST-076/FST-240 which goes west toward Peak 7906. We proceeded to Peak 7906 first and then to Squirrel Mountain but, instead, I will describe what we should have done and save you from some serious, steep bushwhacking.

Continue southwest as you parallel the peak’s base. As you hike the trail, continue to assess the terrain and vegetation on the peak until you reach the base of a ridge that is fairly clear of vegetation and begin hiking off trail. As you gain elevation, the summit comes into view and you can use it to help navigate around some densely-vegetated and forested sections that are common in these lower-elevation peaks.

After summitting Peak 7906, drop back down to FST-076/FST-240 and backtrack (northeast) until you return to the intersection mentioned in the previous paragraph. Now, turn southeast and begin a steep ascent that takes you back to the intersection of the Corral Crest Trail and the Big Hole Crest Trail. Continue back on FST-217 to FST-238 and the Drake Creek trailhead. Note: It is probably not much shorter, but the three-peak loop can be done from the Grove Creek trailhead. There are some nice views of the Teton Mountains and the Teton Valley from all three of these peaks. 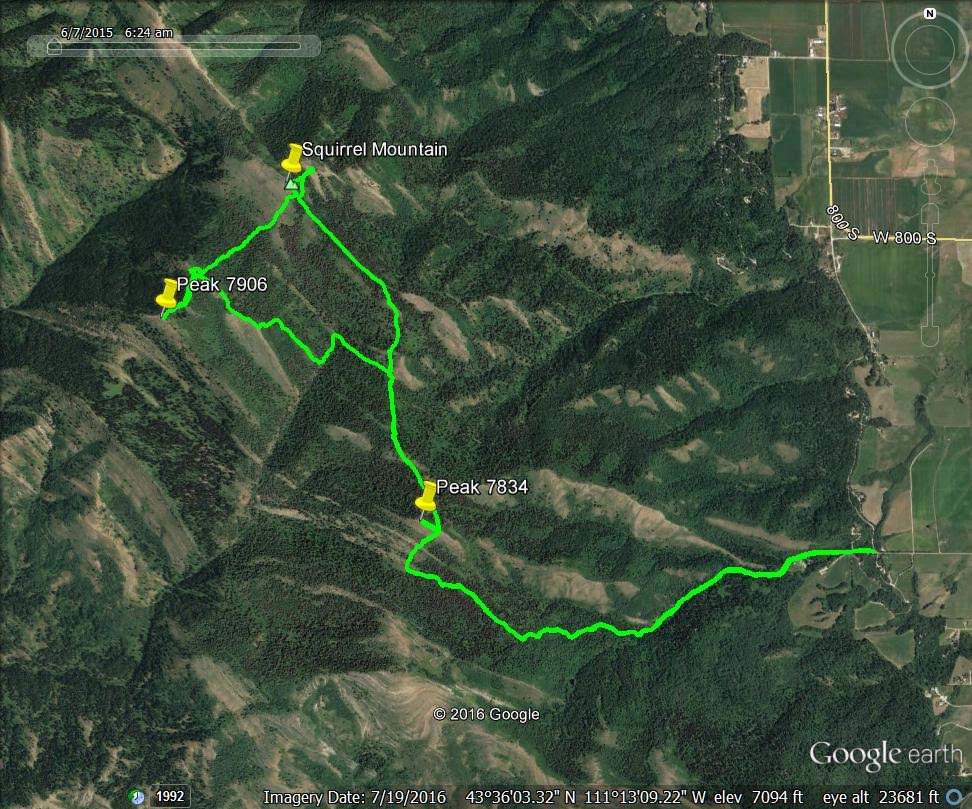 The actual summit lies just north of the trail. Leave the trail, cross a fence and top out. The ascent over the 2 intervening peaks gains 1,397 vertical feet and loses 442 vertical feet in 3.6 miles, one-way. The trail was in good shape for the entire distance (July 2017). 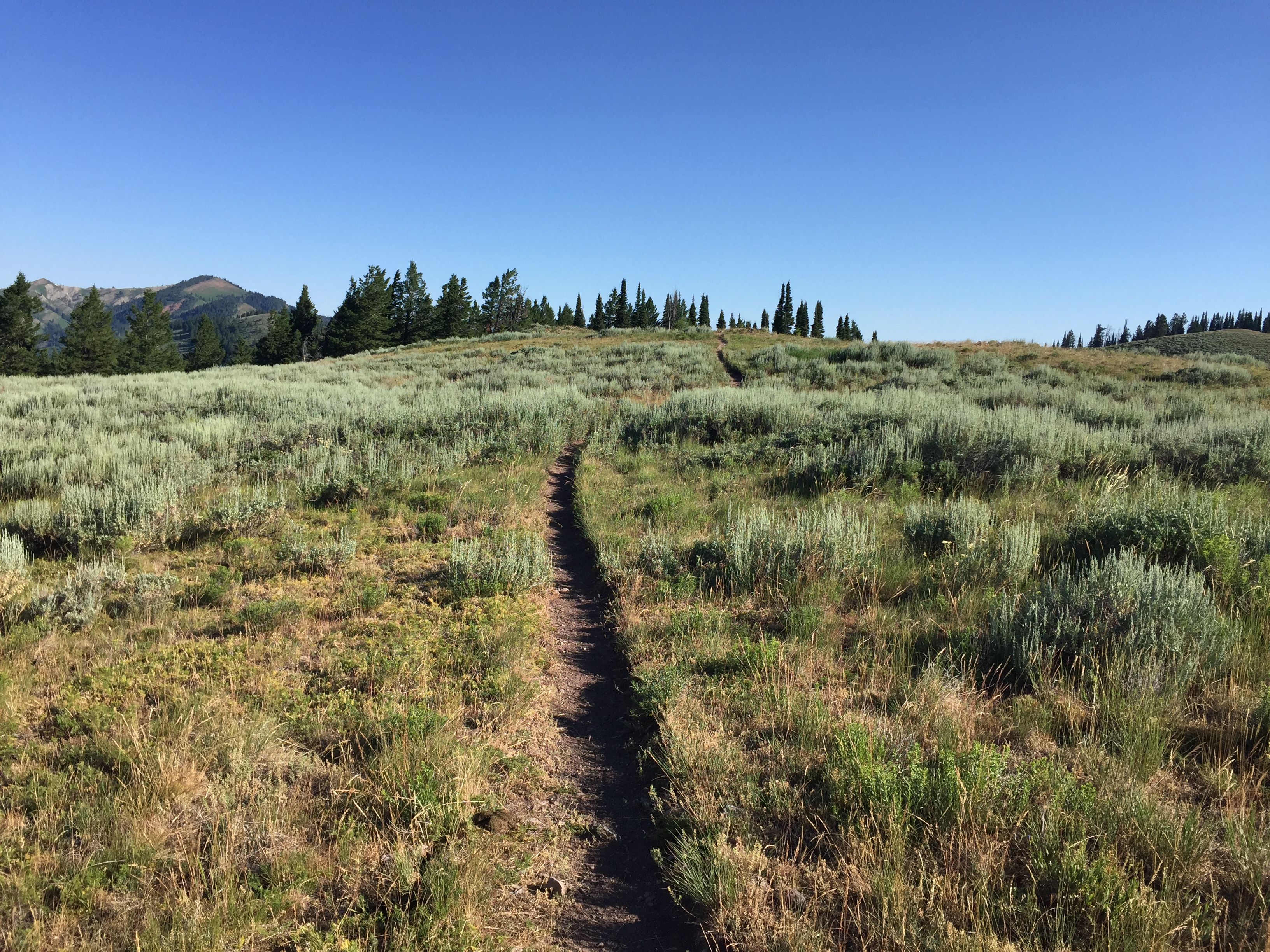 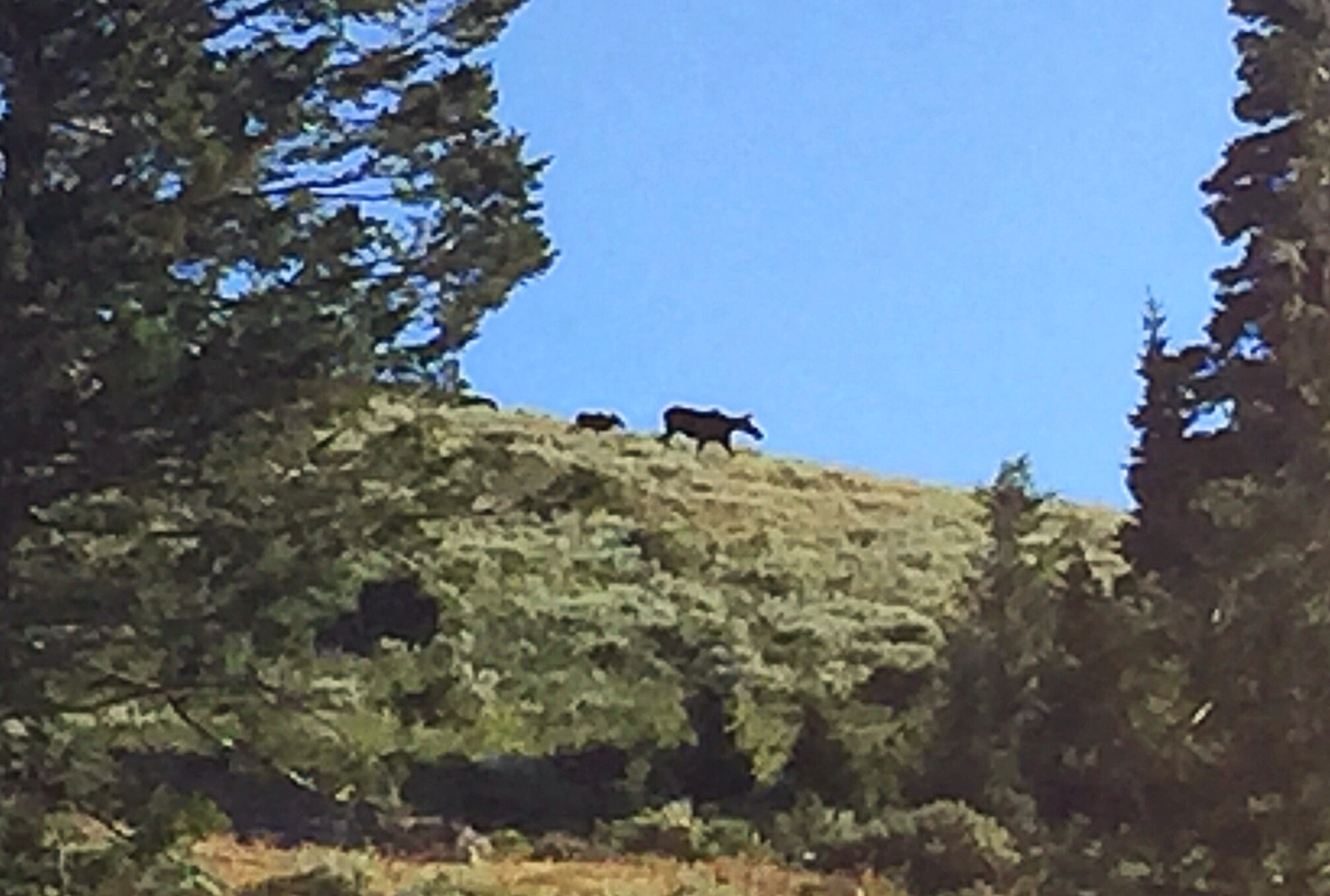 A moose just off the summit of Peak 7834 following the trail from Pine Creek Pass. 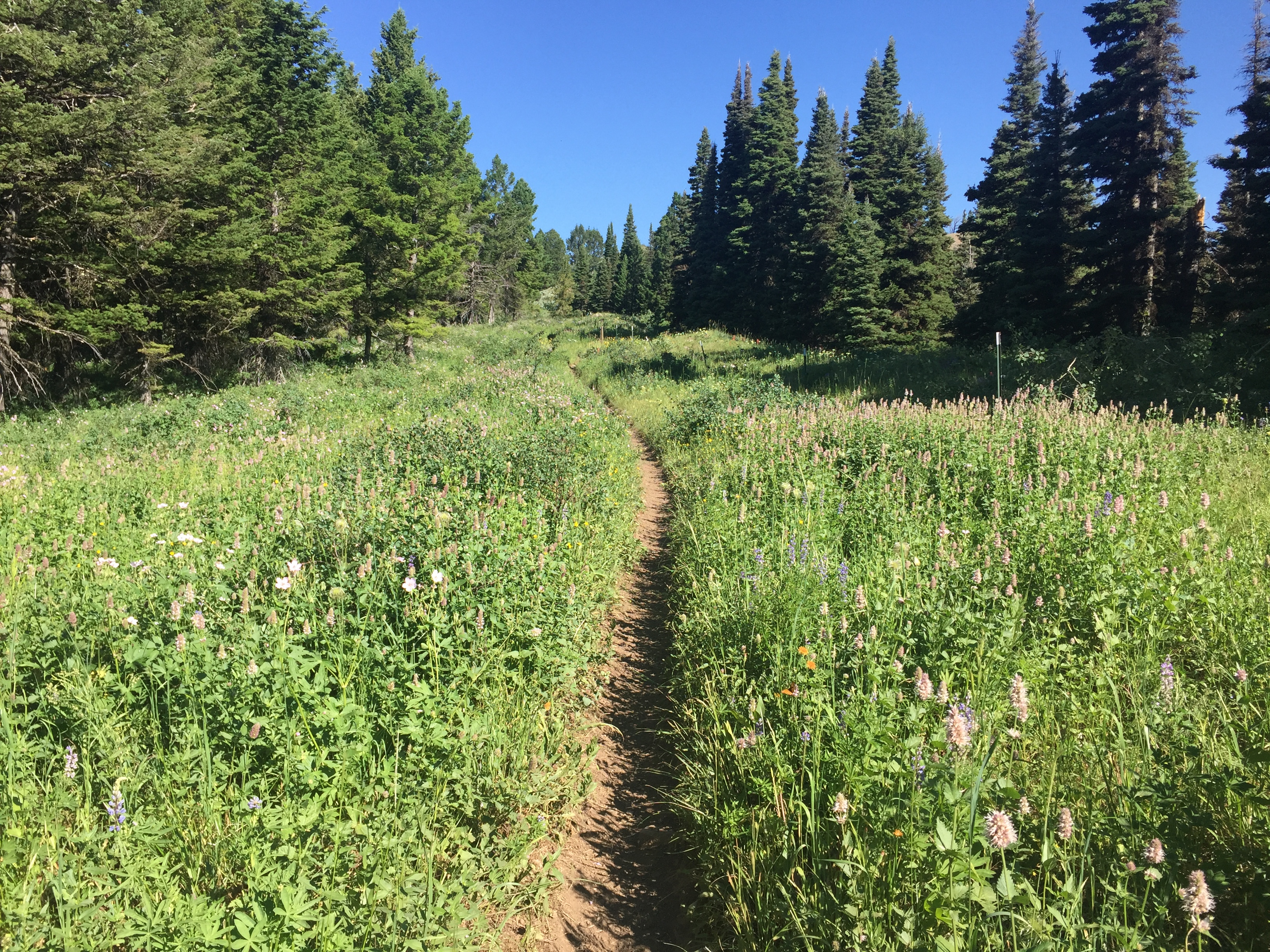 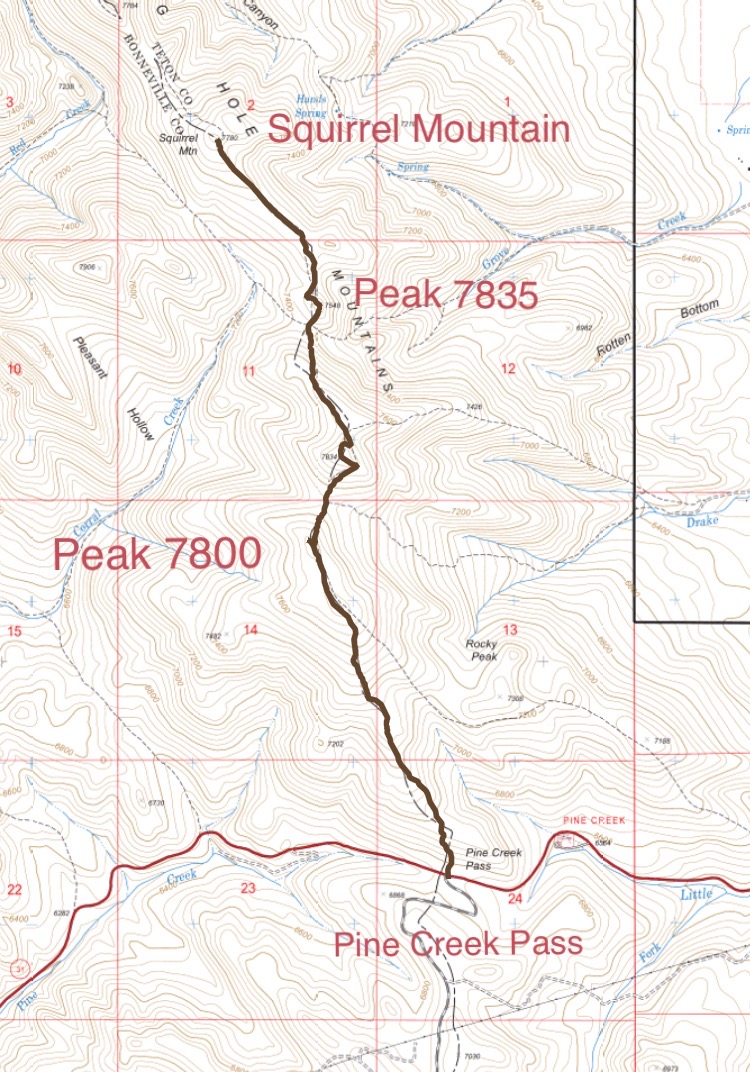