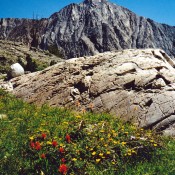 Climbing and access information for this peak is on Page 251 of the book. Most ascents are made from the west via Big Basin. Dave Pahlas and Livingston Douglas climbed the peak from the East Fork Wood River. Livingston’s detailed route descriptions are set out below and Dave’s GPS track as well as a link to his trip report. Livingston’s route varies from Dave’s as it climbs the east face all the way to the southeast ridge. Dave’s descent route descends the east face and avoids both the north ridge and the southeast ridge. Updated November 2022 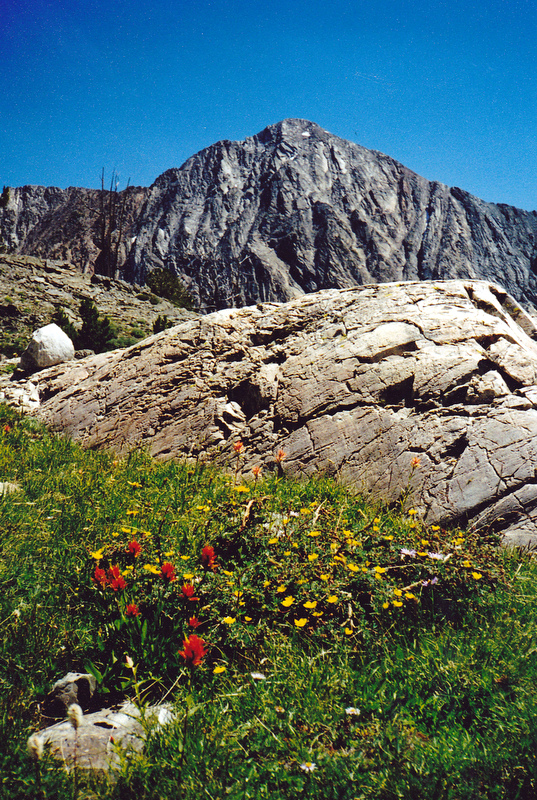 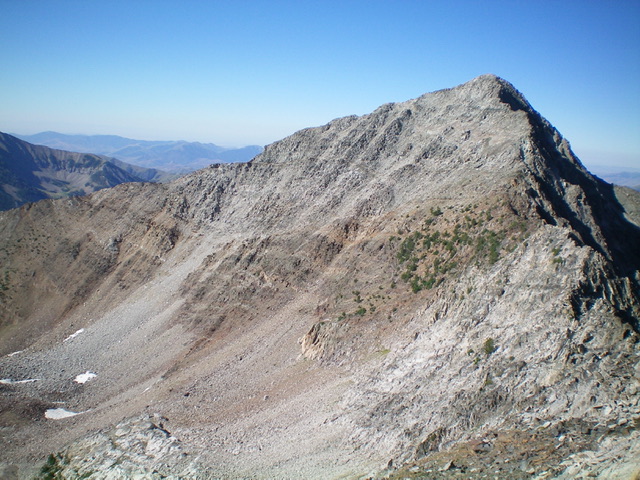 From the base of the ridge towers on the north ridge (at the top of the basin that separates McIntyre Peak from Jacqueline Peak), climb diagonally up and rightward across the east face to reach the base of the massive summit ridge cliffs underneath the north ridge. Work along the base of the cliffs, with a few minor gullies and ribs to cross, to reach a chute that leads up to a notch in the southeast ridge (Class 2). Once on the southeast ridge, scramble up steep, narrow ridge rock (with ledges) to the rocky summit area (Class 3). The summit of Jacqueline Peak is a mess of large boulders. There was no summit cairn so I hastily built one with the loose talus that I could find. 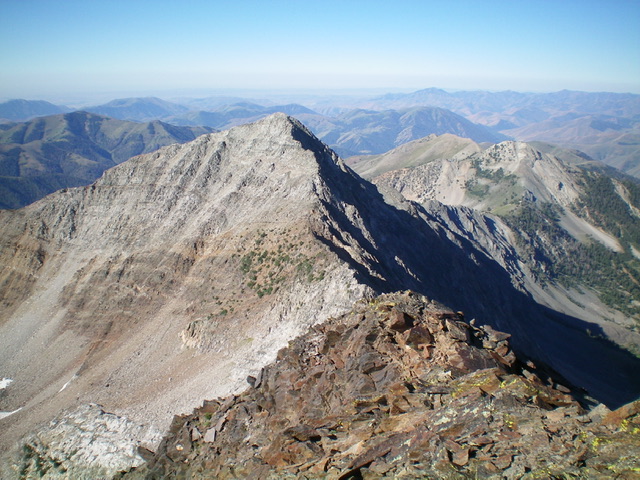 Jacqueline Peak as viewed from the summit of McIntyre Peak. Livingston Douglas Photo

From the summit, descend the southeast ridge through steep, choppy ridge rock up high (Class 3) then skirt a series of rocky ridge outcrops. Stay close to the ridge, mostly on its right/west side in this section. The final drop to the valley floor is harder than one would expect. It is critical to make a right/south turn at a ridge corner at 10,150 feet to avoid ridge cliffs below. As it is, this route almost cliffs out, but you could always exit right/west into a wide basin if necessary. Stay on the ridge crest and downclimb Class 3+ steep face rock and ledges to reach a loose talus slope below. Intercept the East Fork Road at about 8,000 feet (on public land), only 0.3 miles from the road’s end and the trailhead. 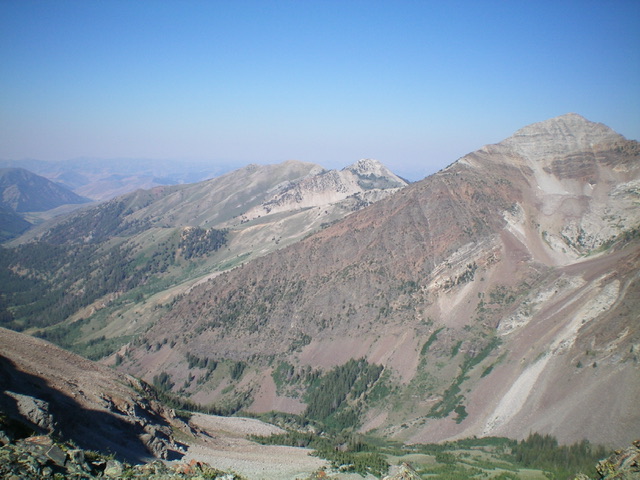 Jacqueline Peak (summit is at far right) and its lengthy southeast ridge (descending diagonally left in middle of photo). The southeast ridge was my descent route. Livingston Douglas Photo 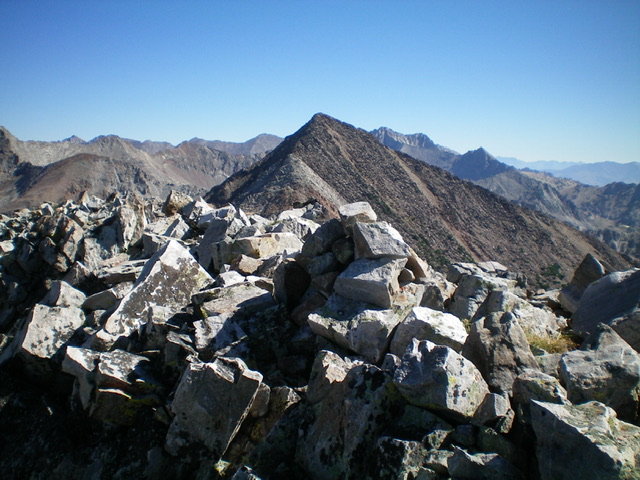 The rocky summit of Jacqueline Peak with McIntyre Peak in the distance. Livingston Douglas Photo

Most people climb the peak from scenic Big Basin. Dave Pahlas climbed the peak from the East Fork Wood River. Use the link below to read his trip report. 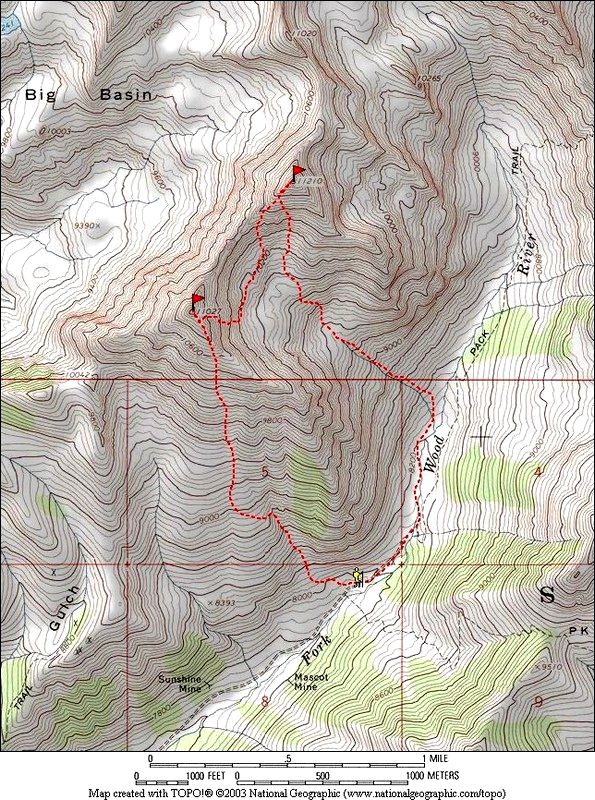 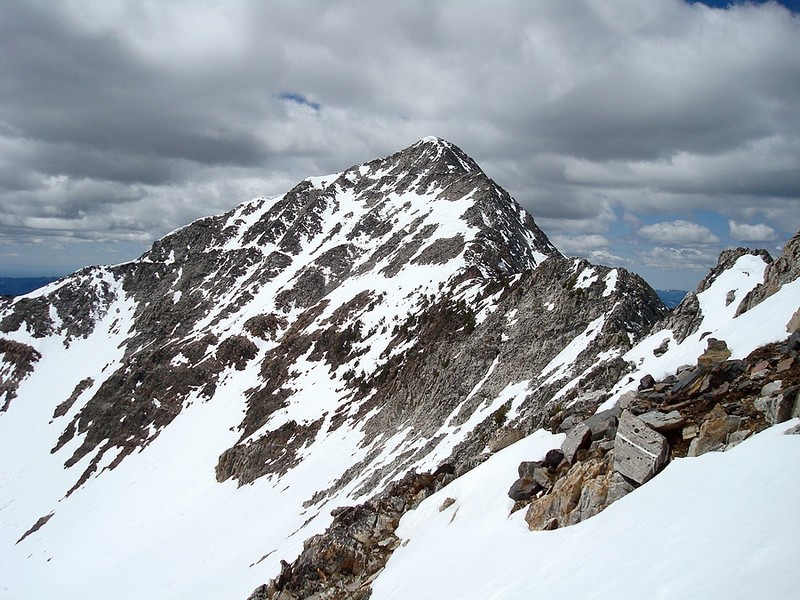