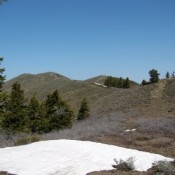 This Grand Slam peak is not in the book. There are 4 routes listed below in order of popularity. All 4 routes involve steep Class 2 hiking. Updated June 2019

Mount Heinen is located in the Boise Mountains about 4 miles NNW of Arrowrock Reservoir. This peak is one of the 4 peaks of the Grand Slam Peaks. The other three peaks are Kepros Mountain, Cervidae Peak and Shaw Mountain.

Mount Heinen is the highest of the Grand Slam Peaks. It is a great early-season hike, but it is a strenuous climb from any direction. There are 4 routes outlined below: the standard route, the North Face Route, the Southwest Ridges Route and the Orth/Koehler Route. USGS Dunnigan Creek

Access begins at the point where the Middle Fork Boise River Road/FS-327 [(C) on Page 154] leaves ID-21. This junction is 6.1 miles north of the Lucky Peak Dam. The junction is signed for Atlanta, Idaho. Follow this paved road along Lucky Peak Reservoir to Arrowrock Dam. The pavement ends just short of the dam. Set your odometer to zero at the top of the dam.

0.0 Arrowrock Dam. The road along Arrowrock Reservoir is narrow, washboard gravel with many blind turns and significant dangerous drop-offs. On weekends, traffic can be heavy. Drive slowly and responsibly.

7.5 Irish Creek Boat Ramp and the Trailhead for the Standard Route.

9.0 Cottonwood Creek Road/FS-377 junction. Turn left. This road’s condition varies from year to year. In 2019, it was in good condition with only a few rough spots. A high-clearance vehicle is recommended.

The route starts on the northwest side of Arrowrock Reservoir. Park just north of the Irish Creek Boat Ramp. This route was originally a motorcycle track but is now designated for foot traffic only. The track can be viewed from this spot as it climbs up the steep slopes to the west. Follow this track upward and to the northeast toward Point 5402. 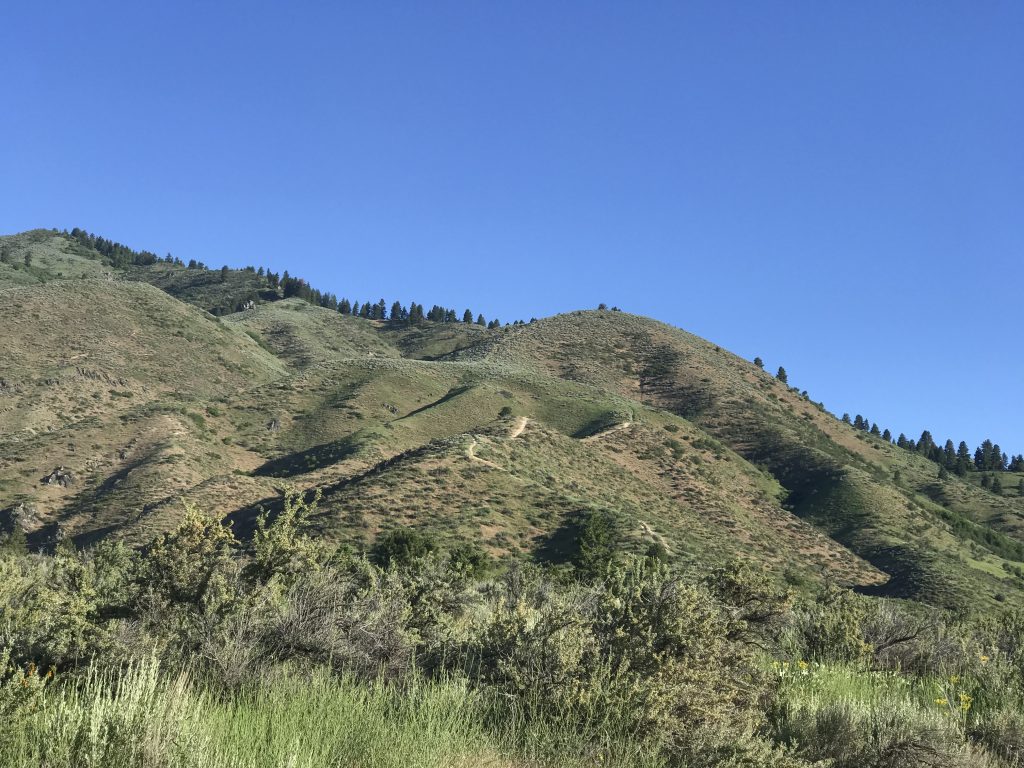 The trail climbing steeply up the slopes above Irish Creek.

The route now follows an overgrown fire break until just south of Point 6137. Traverse around Point 6137 and then continue north along the ridge that leads to Mount Heinen. This is a long, strenuous route. Take lots of water. Since I first climbed this route in 2000, a use trail has emerged for nearly the entire distance. The route is roughly 10.0 miles with 3,500 feet of elevation gain round-trip. 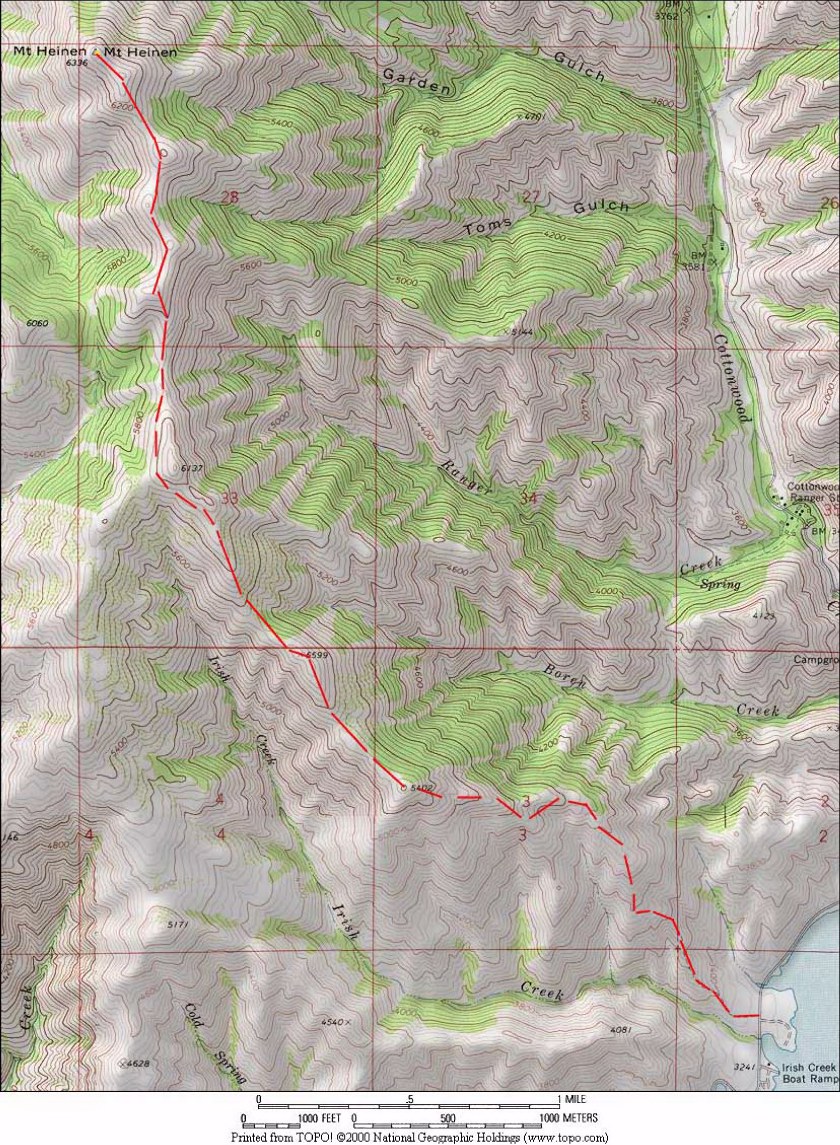 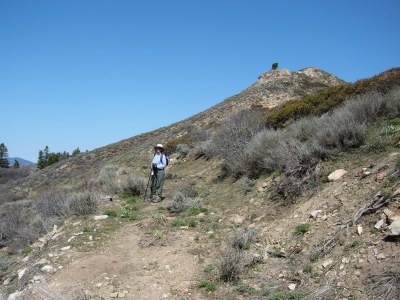 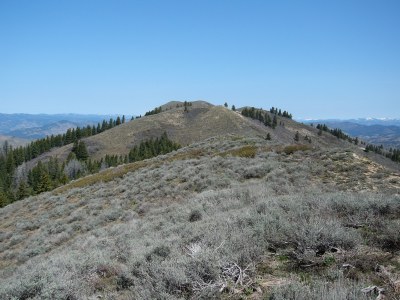 View of the summit from near the top of Point 5402. 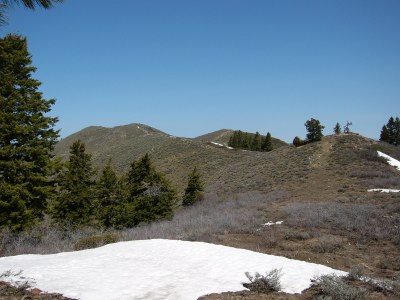 View looking toward the summit from the low point between
Point 5402 and the summit. 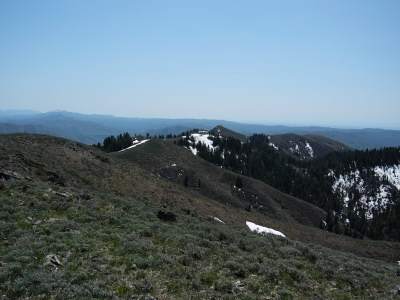 Looking back down the ridge.

This route is a little shorter than the Standard Route and has much less elevation gain, with only 1,625 feet for the climb and 264 feet on the return. Nevertheless, it still includes a steep, difficult 900-foot section up the North Face.

This route leaves FS-377 at the top of the North Fork Cottonwood Creek/South Fork Thorn Creek Pass. The route uses the FS-202 road system, a group of closed logging roads. The road is not well-mapped on either the Forest Service or USGS maps as it includes a number of roads not shown on the maps. FS-202 and FS-202C are in good shape though FS-202C has brush encroaching it in places. Unfortunately, none of the roads have signs designating which road is which. While I have hiked this route, I highly recommend using a mountain bike for the first 3.6 miles. 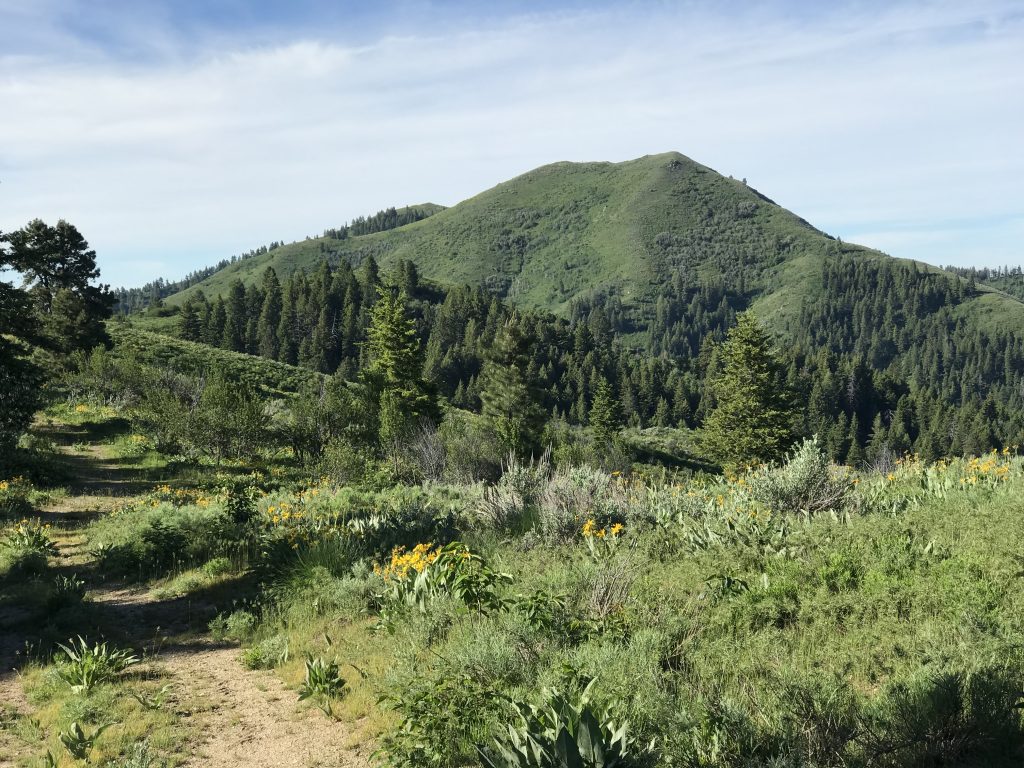 Mount Heinen as viewed from FS-202C.

Follow FS-202 west from the pass (past the gate) for 0.4 miles to a junction. Go left. The road now winds in and out of drainages to the ridge top where it turns south. Roughly 1.9 miles from the pass, there is a Y-junction. Keep right and you will immediately come to a second Y-junction. This junction is the beginning of FS-202C. Go left here. 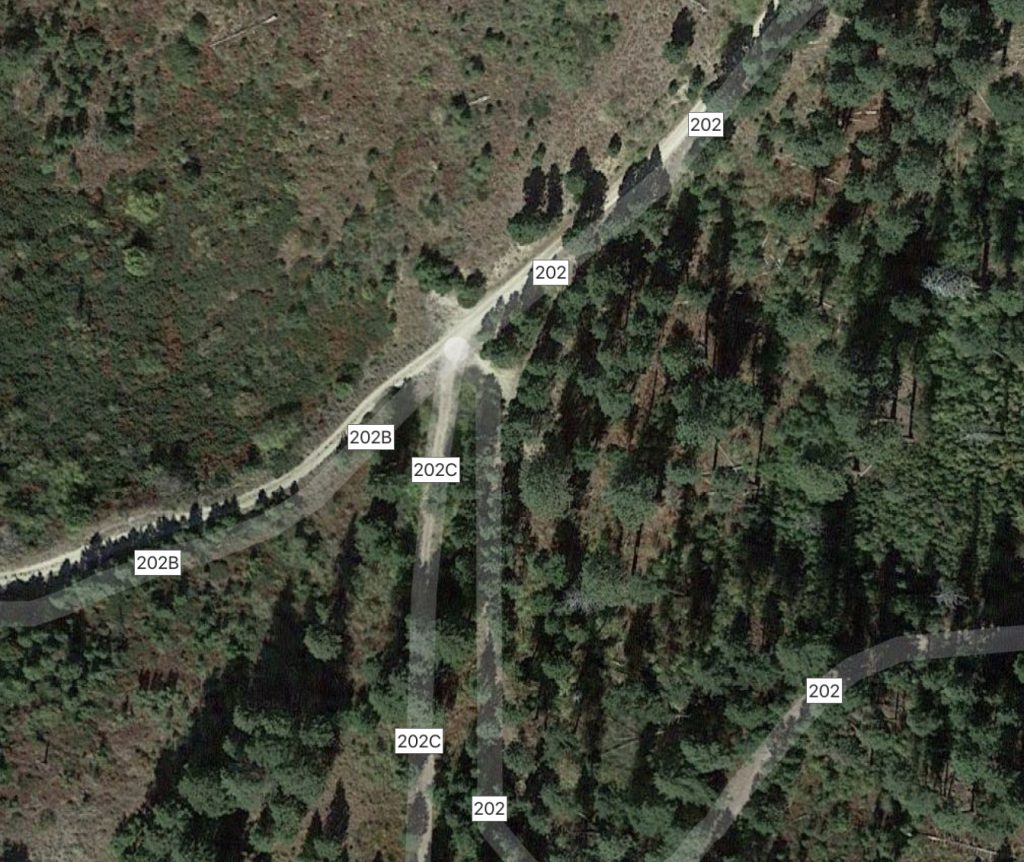 This Google Maps photo shows the confusing intersections at 1.9 miles. You want FS-202C.

FS-202C quickly wiggles its way steeply up the ridge, staying on the East Side at first and then crossing to the West Side between Point 5710 and Peak 5740. Once past Peak 5740, the road stays on the ridge top until it reaches Point 5645 at 3.6 miles. From this point, the road drops to the saddle below Heinen’s North Face, losing 200 vertical feet. While this section is rideable, I would leave my mountain bike at Point 5645.

From the saddle (5,444 feet), the trail climbs steeply to the peak’s [lower] East Summit. This section of trail appears to be an old fire break which is occasionally traversed by elk or a human. The trail is brushy in spots and is always steep as it climbs up the face. As shown on my GPS track, it is possible to leave the trail short of the summit ridge and traverse directly to the summit. Round trip stats: 9.2 miles with 1,900 feet of elevation gain. 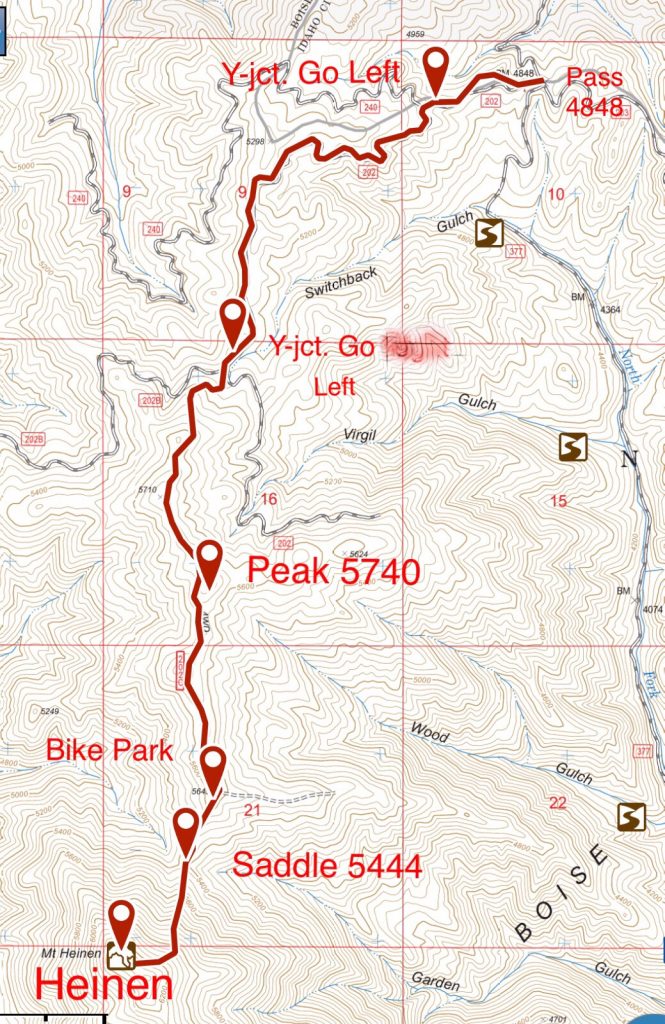 My GPS track for the North Face Route. 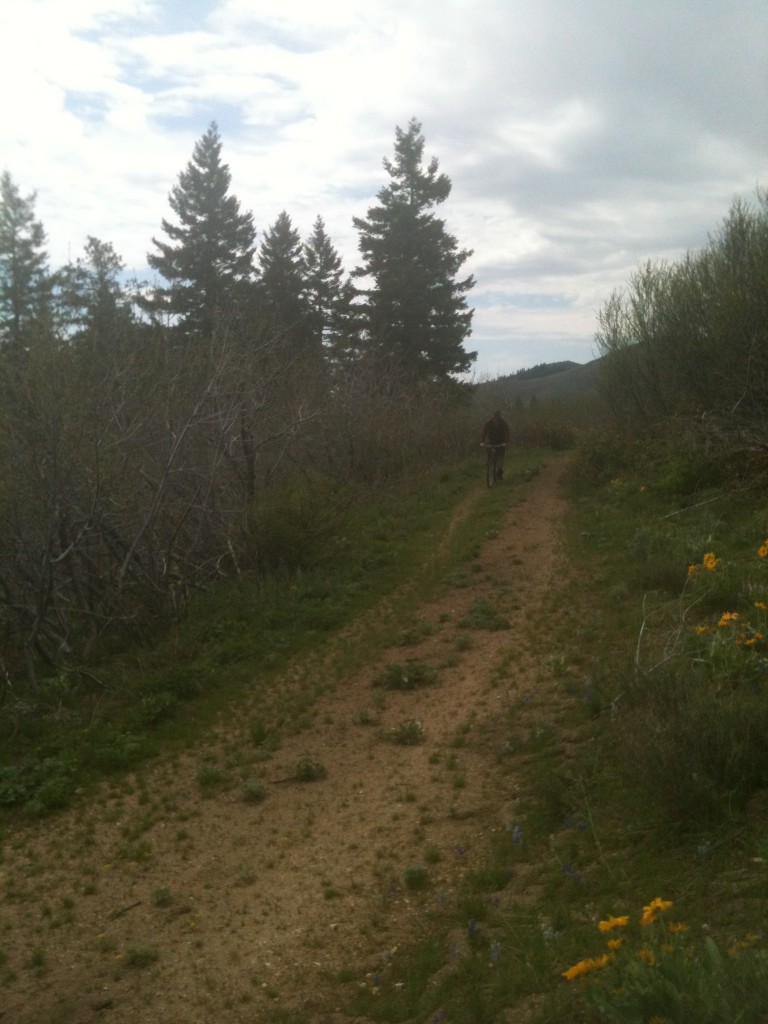 The ridge top road is good enough for mountain biking. I have never been on this road when the gate was open. 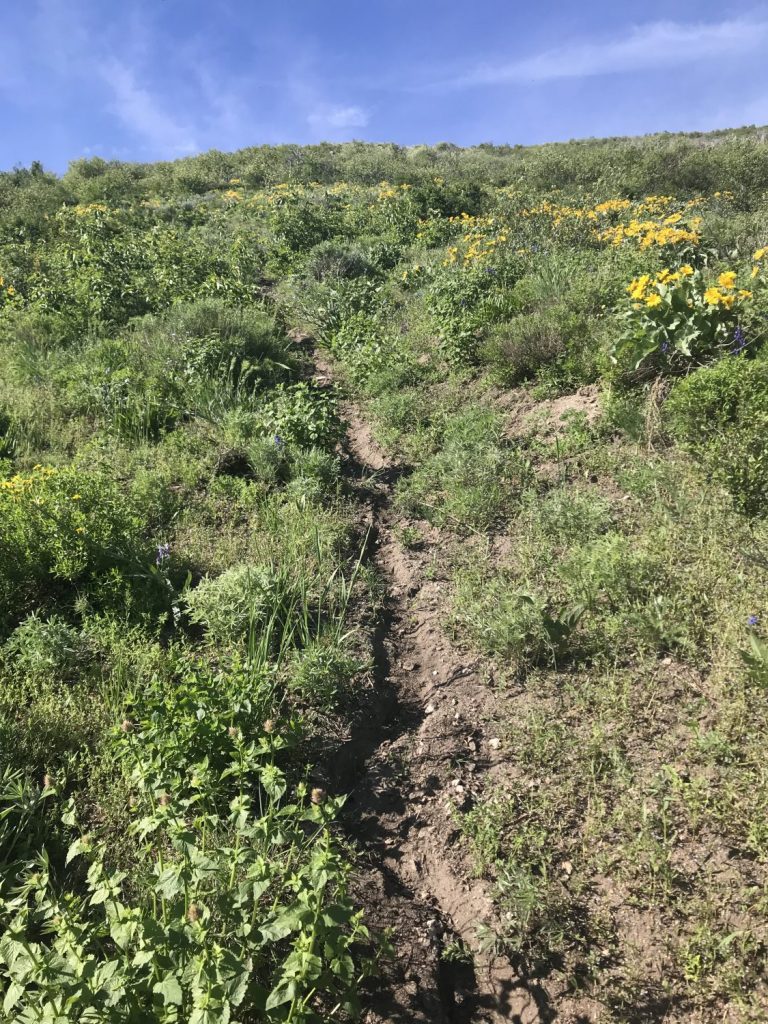 The steep trail leading up the North Face.

Whether you are walking or riding a bike, the North Ridge is delightful in late Spring and early Summer.

There are two ridges that run on either side of Cinch Creek that climb more gradually than the Standard Route up to Heinen’s South Ridge. John Platt suggested the route and along with Dan Robbins and 4 others, we climbed up the ridge on the West Side of Cinch Creek and descended the ridge on the East Side. This was in 2007 and none of us were carrying a GPS. I estimate the distance at 12.0 miles with 3,500 feet of elevation gain round trip. See John’s trip report which is linked below.

There are two parking options as shown on John’s map below. After passing the Arrowrock Dam, you can park at the first intermittent flowing drainage you encounter or you can proceed on to Cinch Creek, which is the a major drainage that is difficult to miss. See the map below.

Both ridges are classic ridge walks with good game trails for much of the distance. The ridge on the East Side of Cinch Creek is the shorter route at around 10 miles. If you climb the ridge on the West Side, you will encounter a thick forest in the saddle between Point 6060 and Heinen’s South ridge. This area holds snow longer than most points along the route. Whichever ridge you climb, your goal is to link up with Heinen’s South Ridge on the North Side of Point 6137. From there, follow the Standard Route to the summit. 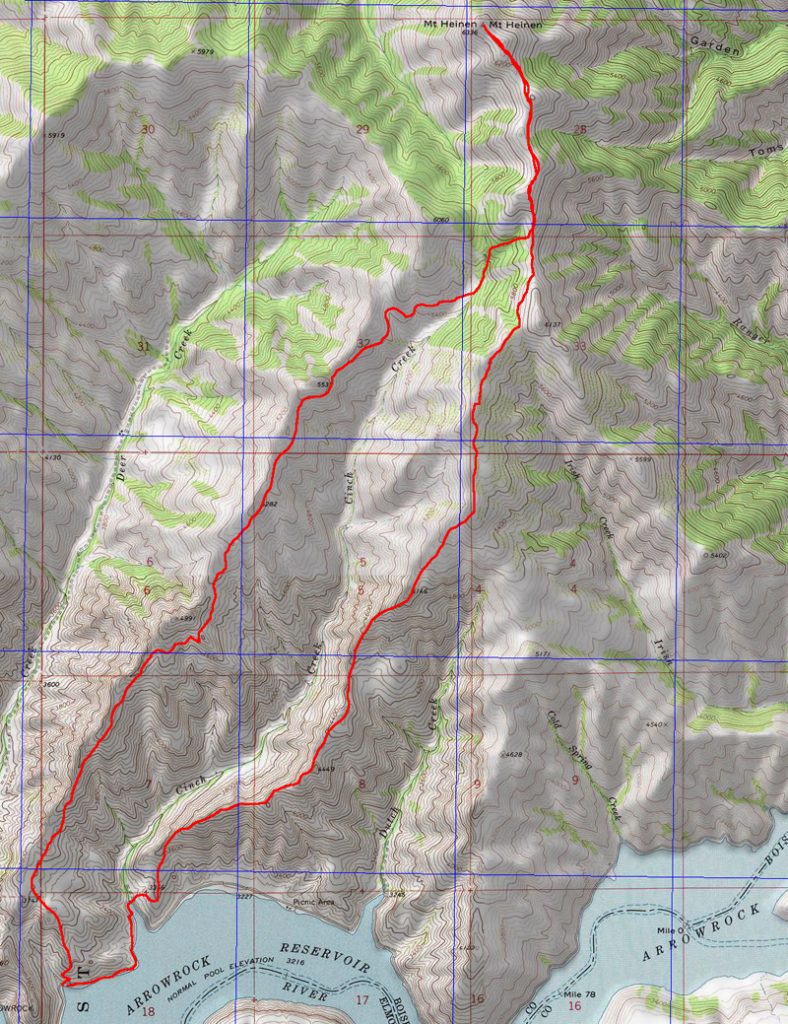 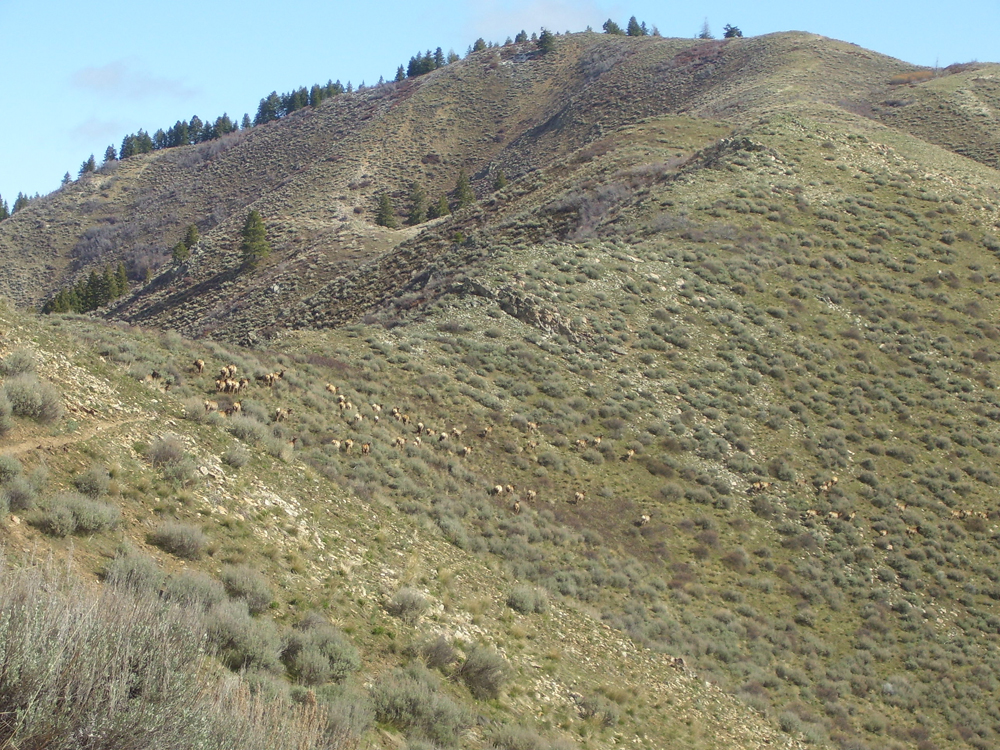 This view is typical of the terrain found on both ridges. Note the game trail and the elk. John Platt Photo

Brian describes the climb as follows: “We were also going to go up Garden Gulch, but it has a no trespassing sign at the bottom of it, so we headed up the wrong ridge on Wood Gulch instead. We figured the route out on the way down.” 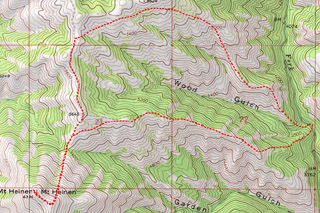 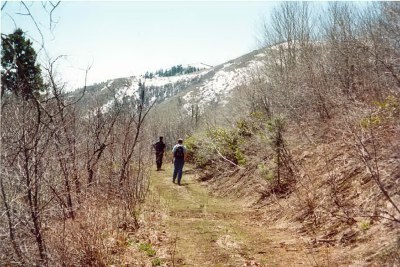 Approaching the North Side of Mount Heinen. 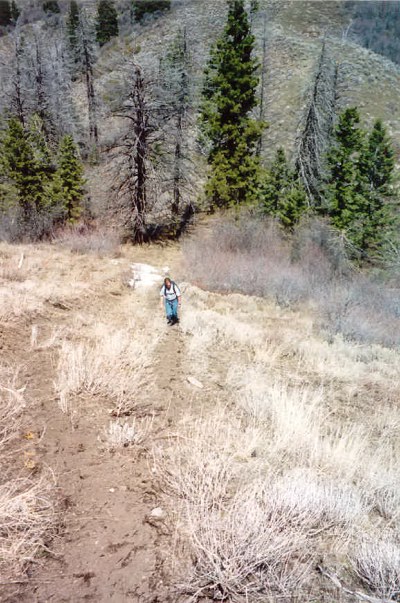 Climbing up the steep North Side of Mount Heinen. 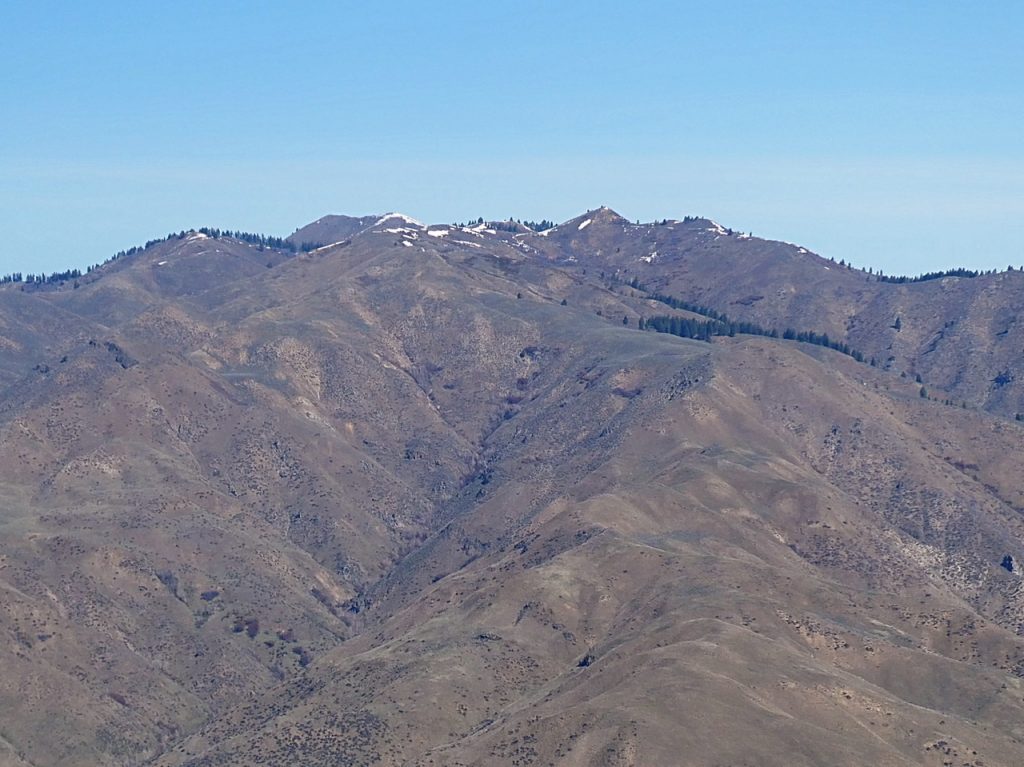