The Lemhi Range is situated in the southeast corner of Idaho’s central mountains. Despite its size and ruggedness, the range remains relatively unknown outside Idaho. The nearby Idaho primitive area, Grand Tetons and the Lost River Range (with 12,655-foot Mount Borah, the highest peak in Idaho) leave the Lemhis in a mountaineering backwater. The range runs over 100 miles north to south but is only 15 miles wide.

Only one primitive road crosses the Lemhi Range. This crossing is made in the northern section of the range. The Lemhis becomes increasingly rugged at their south end. Diamond Peak cast its shadow over the range with an elevation of 12,197 feet. Bell Mountain (11,618 feet) is the most spectacular summit in the Lemhis. Over the last 3 years, we have scrambled over many routes in the South Lemhis. Trial and error have been our guides. There is little information available on routes and roads. Topo maps are essential in planning a climb. Almost all of the approaches to the major peaks involve long and strenuous hikes. If you can drive as high as 6,400 feet, you’re lucky. A few mining roads climb as high as 9,000 feet but you’ll need a 4WD vehicle and a bucket of raw courage to traverse them.

The Summer climbing season can stretch from April through the end of November. July and August are the most stable months for climbing. We have been snowed off the peaks in October, only to return to clear slopes in November. During many years, the higher peaks receive their heaviest snows of the year in late May or early June. During the Summer, water is scarce and above 7,500 feet, it is limited to occasional snowdrifts. Summer climbing can be hot and you will need to carry more water than usual.

The peaks can be reached by non-technical routes, yet many opportunities exist for establishing challenging technical routes. We carried our rope and equipment to the top several times on what appeared to be a difficult route. On other occasions, we have been stopped by unexpected, unclimbable pitches. Rock composition varies from hard dolomite and limestone to crumbling volcanic rock. Binoculars are essential on trips to the high ridges. We have spotted mountain goats on several occasions and the Idaho Fish and Game Department has recently begun a program to reestablish bighorn sheep to the range.

Bell Mountain is most often climbed from the West Side. The makeshift summit register documents many climbs by people from as far away as New England. Members of the Amy family of nearby Howe, Idaho seem to have a special claim on the peak. They have signed the register almost every year for as long as there has been a register. In an average year, 15 climbers reach the summit.

The West Ridge Route is the most direct. The route starts at 6,400 feet, following the ridge up from aspens, through sagebrush, into Douglas-ﬁr and then on to treeline at 10,000 feet. A long traverse along the ridge finally brings you to the summit dome or “bell.” We climbed the Bell by navigating a rib on its West Face, which is a steep rewarding scramble. Steeper, more exposed, routes dominate its North Side.

Diamond Peak is a large pyramid which has been climbed from both the West and East Sides. We climbed up the prominent East Ridge, which climbs 3,000 feet from treeline to the summit. This route is an interesting scramble with spectacular views of the surrounding peaks and the Birch Creek Valley 6,000 feet below.The North Side of Diamond Peak appears to offer the best opportunities for pioneering technical routes. A rope and ice axe are necessities for snow and ice conditions on the East Ridge.

The Lemhi Range can be reached from Idaho Falls, Idaho by driving north on I-15 for 30 miles to ID-33. Drive west on ID-33 for 16 miles until the highway forks at Mud Lake, Idaho. Take ID-28 north to reach the Birch Creek and Lemhi Valleys on the East Side of the range. ID-33 takes you northwest to Howe, Idaho at the mouth of the Little Lost River Valley. From Howe, the Pahsimeroi Highway goes north up the Little Lost and Pahsimeroi Valleys on the West Side of the Lemhis. 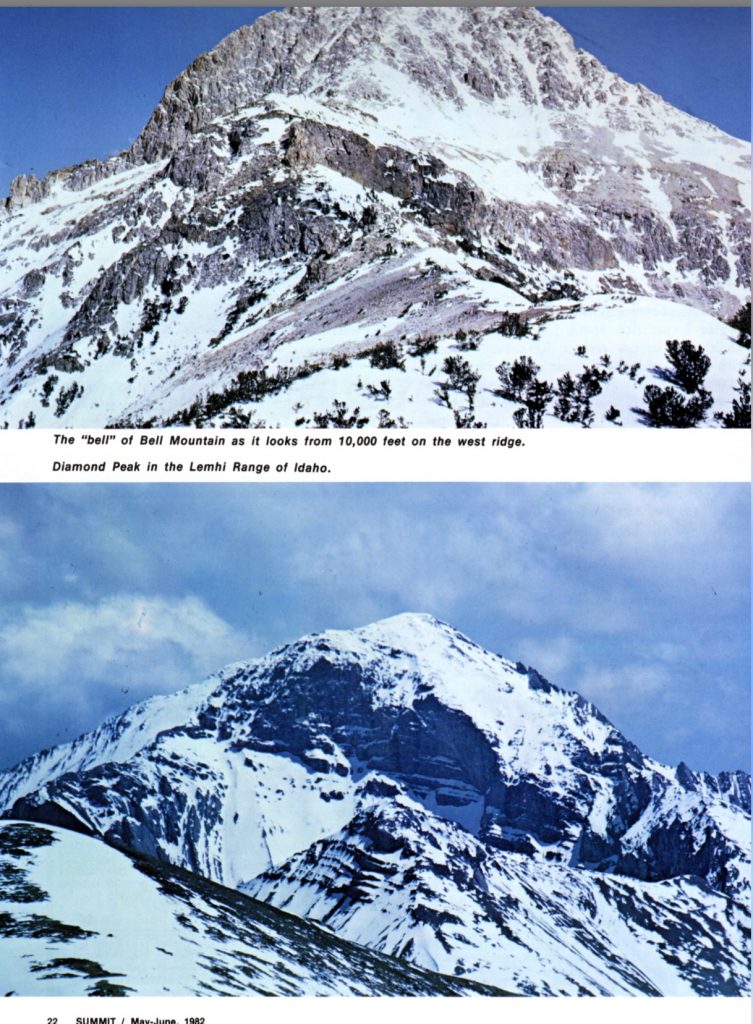