Borah Peak lies in the Lost River Mountain Range of the Challis National Forest. At 12,662 feet, it is Idaho’s highest peak and is usually called “Mount Borah,” or just “Borah” by Idahoans.

Want to climb Mount Borah? Well, this page presents an overview of Mount Borah’s climbing routes and provides links to pages where the routes are covered in more detail. These website pages augment the information for Mount Borah that starts on Page 270 of Idaho – A Climbing Guide. For general information about Mount Borah, please visit the peak’s main information page.

…and have YOU pioneered a route on Mount Borah that you would like to share with the climbing community? Please let us know here. 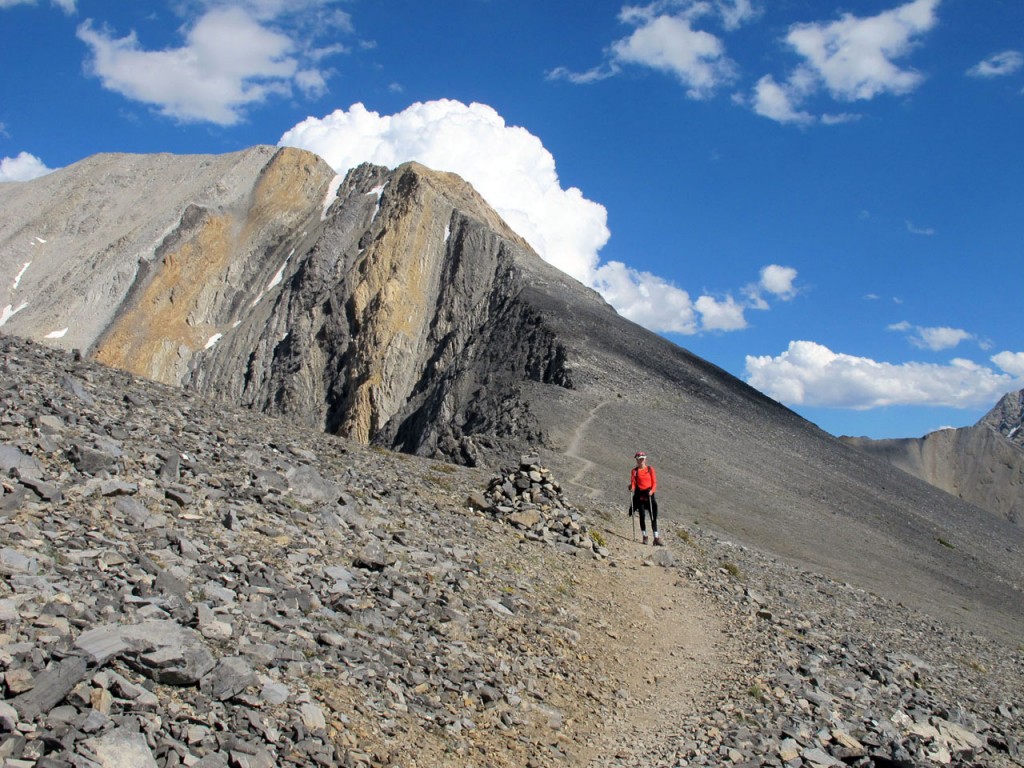 The Standard Southwest (Chicken-Out) Ridge approach up Mount Borah is the most popular route in Idaho. This route gains over 5,300 feet in less than 4 miles and follows a well-worn trail most of the way to the summit. This route is Class 3, if one sticks to the easiest path, but offers a number of variations that are a little harder. In late Summer and Fall, this route is usually dry and requires no special climbing gear. When snow-covered, the route may require an ice axe, crampons and a rope. Helmets are always a good idea, and hiking poles are useful for the steep descent and for crossing the col/snow bridge when it’s covered with snow. The descent is via the same route.

For more details on this approach, visit the Standard Route page. 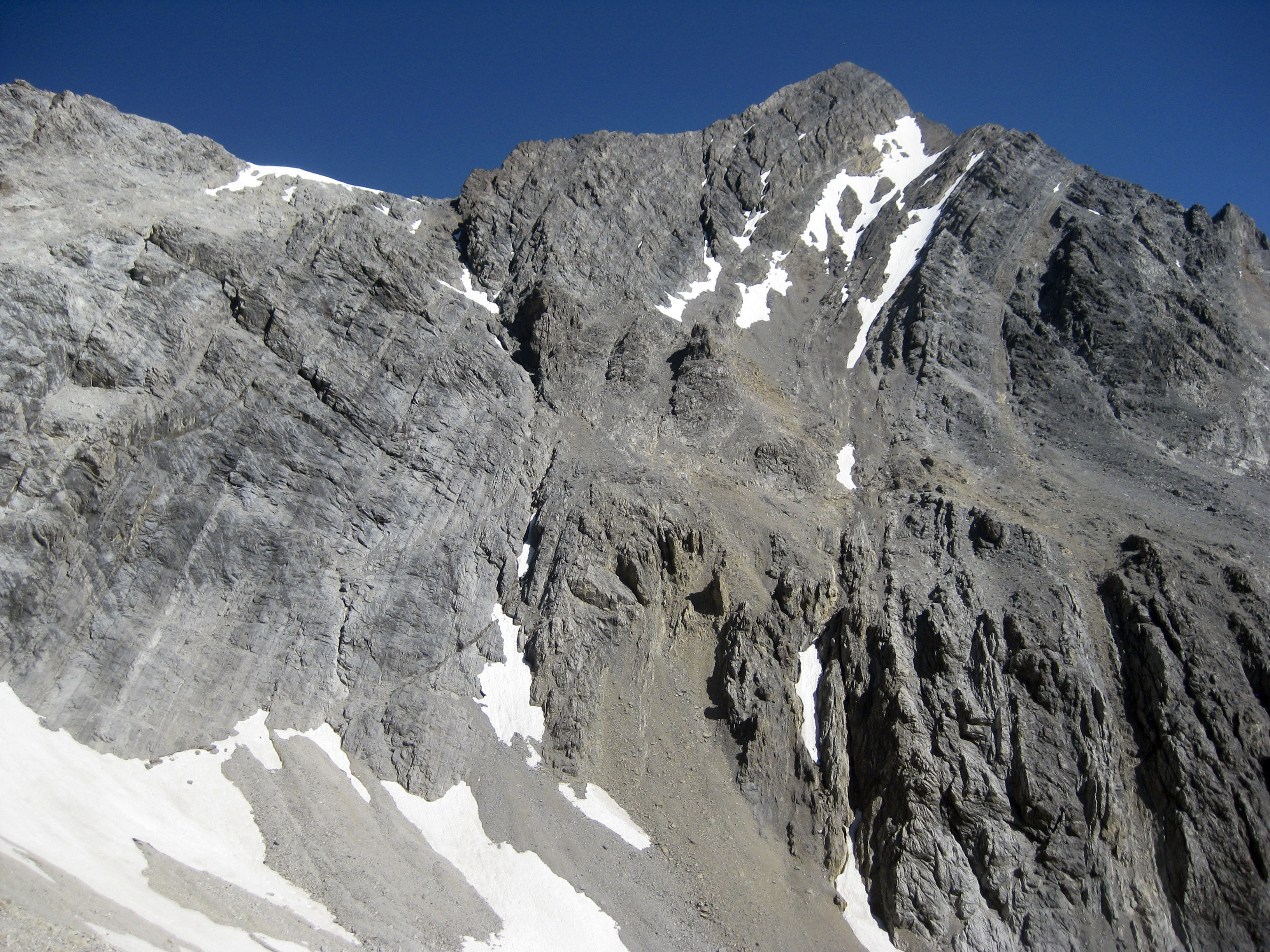 This route uses the same approach described in the East Face Routes, until you reach the 10,000-foot contour where you will traverse south into the Sacajawea drainage. Hike around the large tarn and continue up the drainage past the North Face of Sacajawea until you reach the bottom of the South Couloir. Follow the couloir to where it tops out on the upper saddle and finish on the Southwest (Chicken-Out) Ridge. Descend by way of the South Face or make arrangements for a shuttle if you use the Southwest (Chicken-Out) Ridge to get off the mountain. 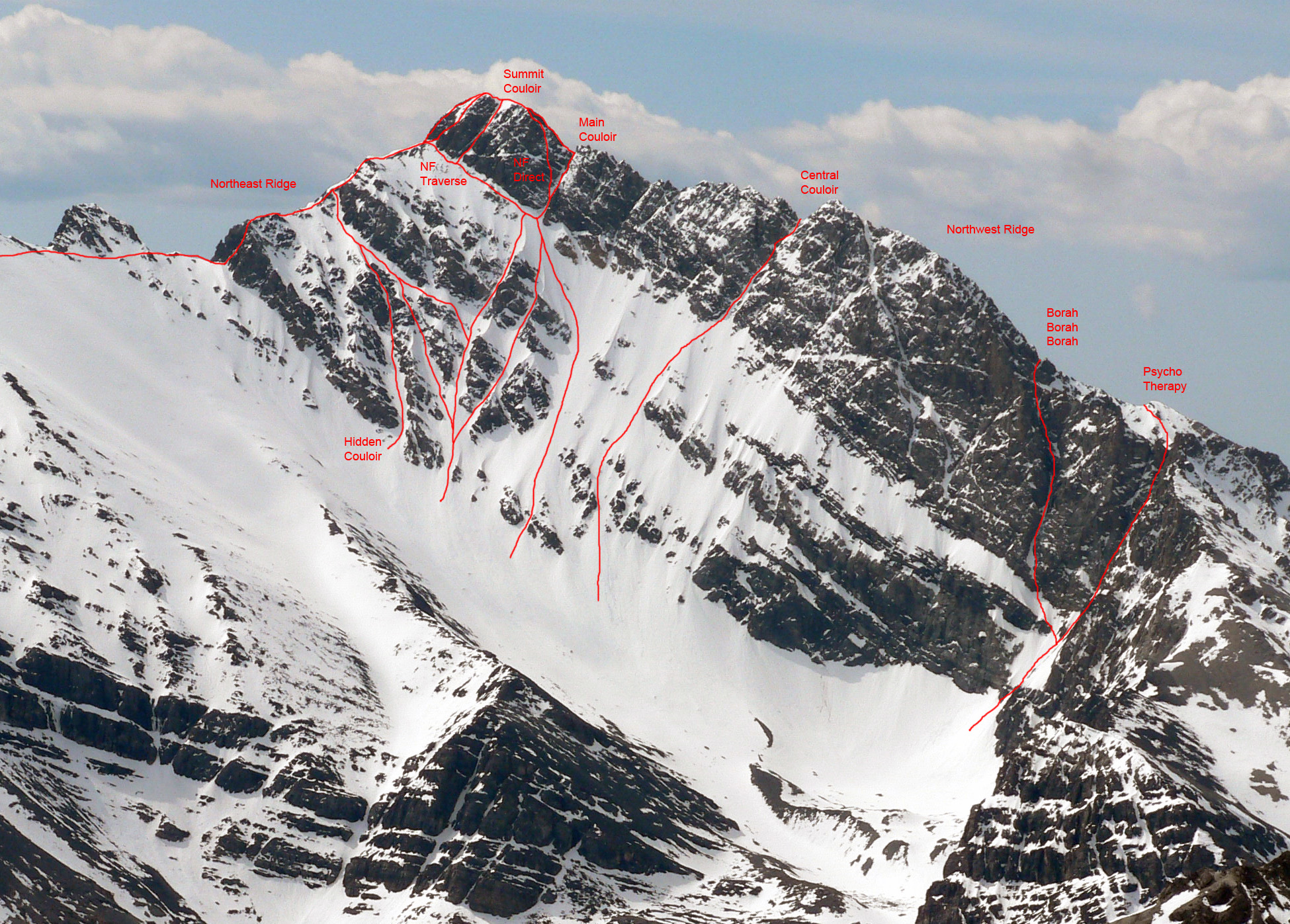 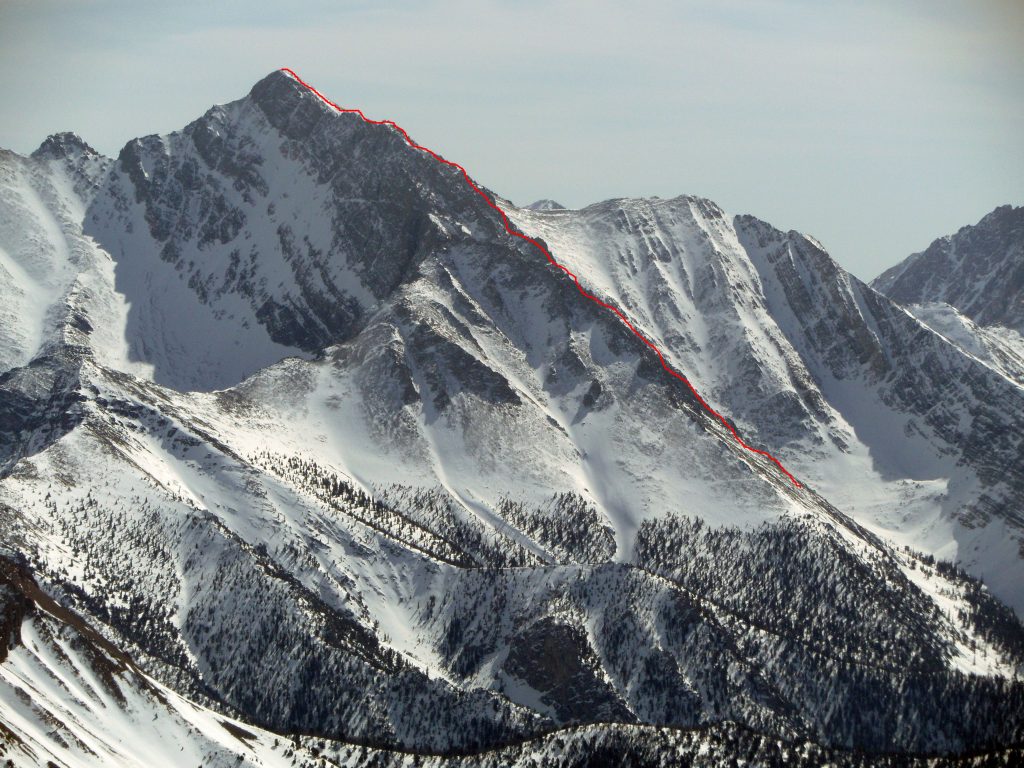 This Northwest Ridge was climbed in 1976 by Idaho brothers Michael and Vaughn Howard. In the Winter of 1977, Vaughn Howard and Guy Campbell climbed the route again, but it’s unknown whether they reached the summit. Vaughn and Guy succumbed to an avalanche as they were descended the mountain in bad weather conditions.

The lower Northwest Ridge splits into two spurs and either can be used to gain the ridge proper. The approach is the same as the North Face (Rock Creek, west) for the first couple of miles and then takes off up one of the spurs. The upper spur is often used as a short-cut to the North Face Cirque. The ridge is mostly Class 3 but, like most of Mount Borah’s routes, options are plentiful, and it is easy to get into harder terrain unless one is careful with their route finding. Descend the Southwest (Chicken-Out) Ridge and, from the lowest saddle, one can drop back into the Rock Creek drainage if that is where you started. 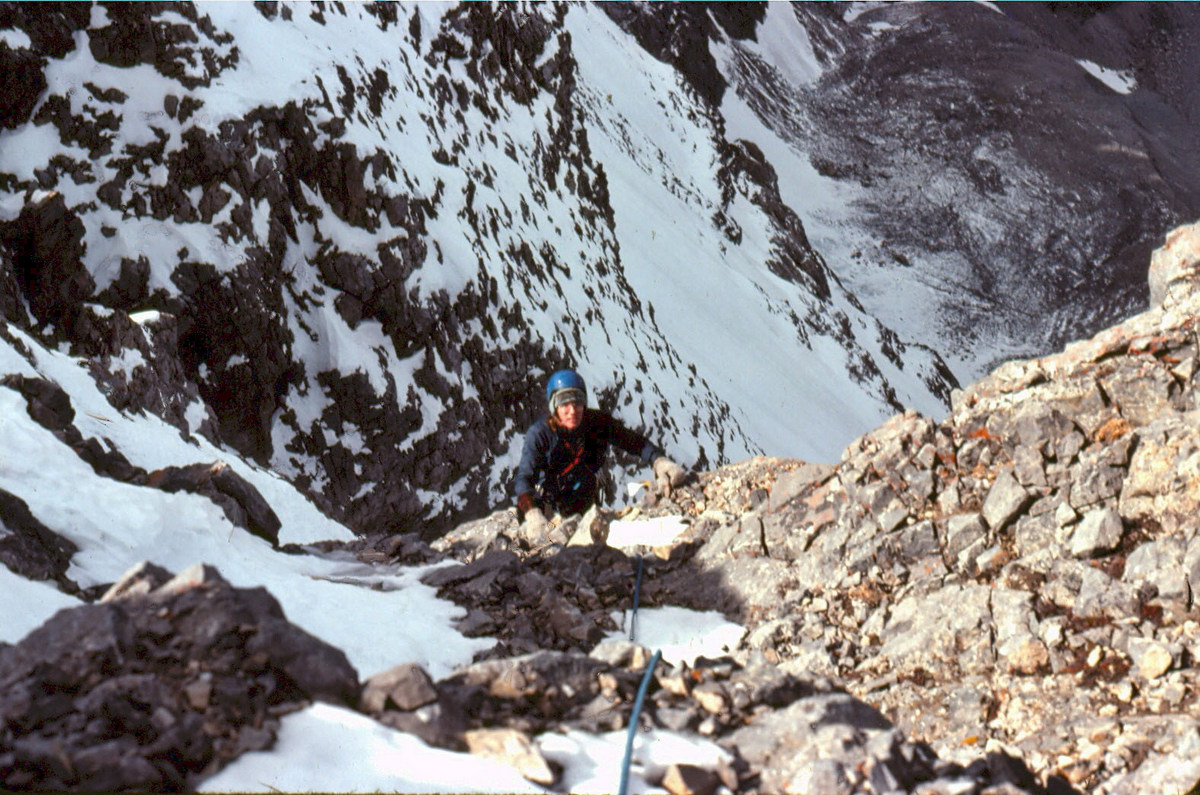 The North Face of Mount Borah is considered by some to be one of the finest alpine climbs in Idaho and one of the few faces that holds ice during most years. The lower face starts at around 45 degrees and steepens to about 55 degrees below the summit pyramid. This route takes the left branch of the main couloir until it ends at the short, steep rock step (5.7) and then follows low 5th, 4th, and 3rd class steps directly to the summit. 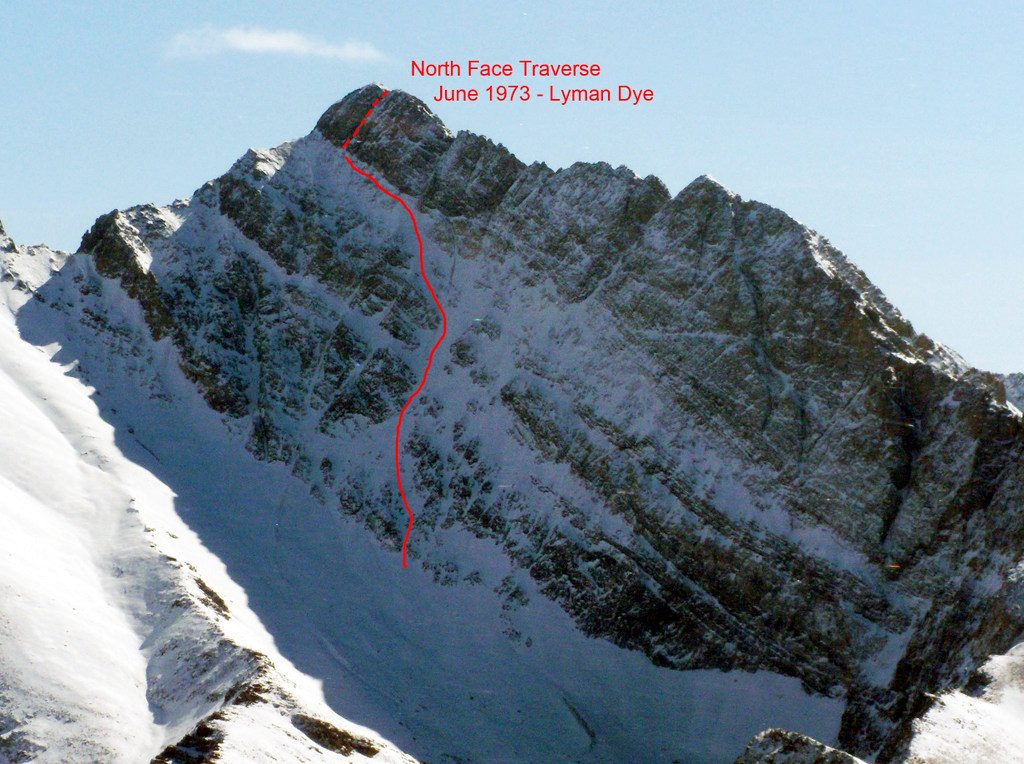 This route uses the same approach as most of the North Face lines. The ice will vary from year-to-year, so pick the line through the rock bands that looks best. All of the lower variations end at the top of the headwall at the base of the main couloir. From here, traverse left across the steep ramp for approximately 3 pitches to the summit couloir, or choose one of the other North Face options to finish, depending upon conditions. When in shape, the summit couloir is all ice and rears to around 60 degrees to finish about 20 feet below the summit. Like the North Face Direct Route, in early season this is mostly a snow climb, where in late season it is often all alpine ice.

An excellent trip report of this route is found on the Cascade Climbers website. 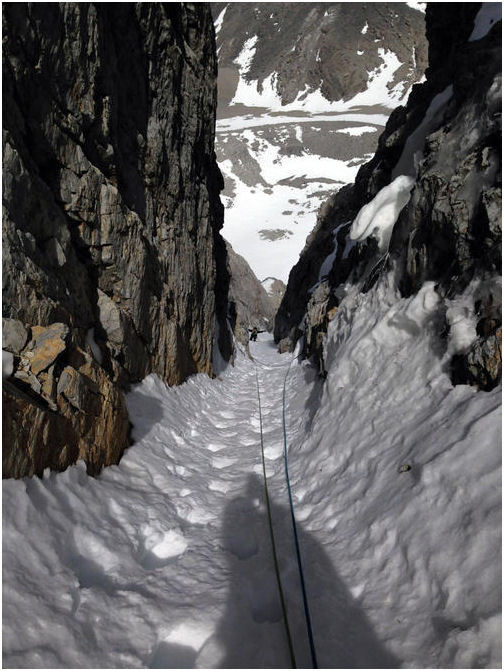 Of all the routes that have been established in Mount Borah’s North Face Cirque, this one has stood out as the test piece of alpine climbing in the range. This route was first put up by Dean Lords and Bryan Woods in September 2003 (American Alpine Journal, Idaho, 2004) and over the years has resisted all attempts at a second ascent by some of Idaho’s strongest alpine climbers until 2014 when Kevin Hansen and Cory Harelson climbed it.

Both the first and second ascent teams described this route as being “run-out” and to quote Kevin, “Hands down, the scariest lead of my life.”

For more details on this approach, visit the Psycho Therapy route page. 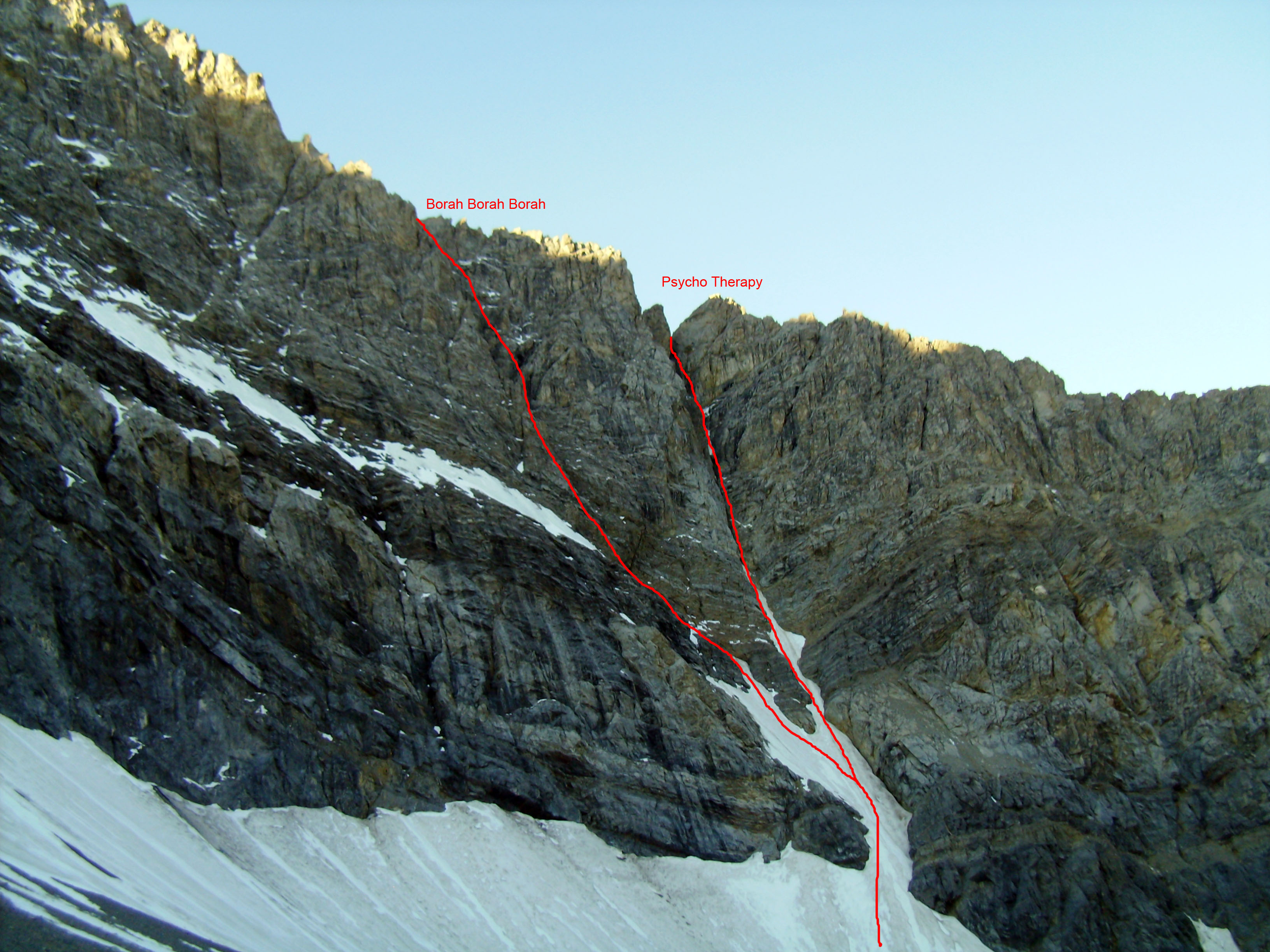 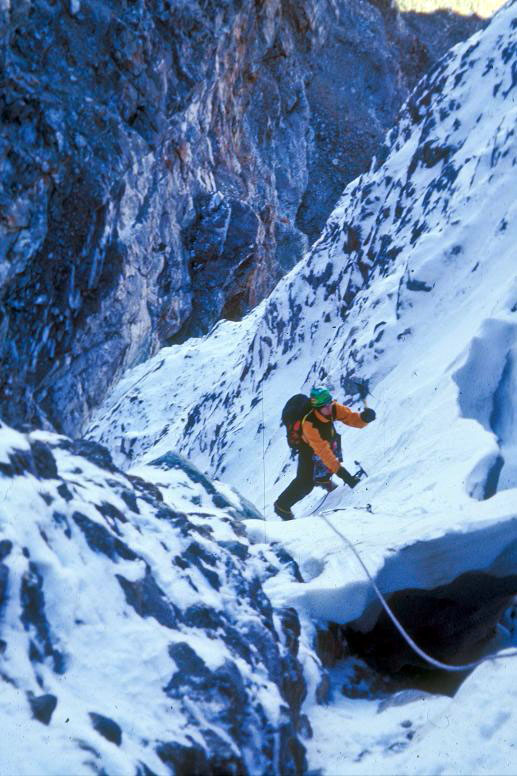 This route was first climbed by Tim Ball (Seattle Mountain Guides), Brad Schilling (City of the Rocks Climbing Ranger) and Doug Colwell in October 2004. The route begins at the base of the Psycho Therapy Couloir and climbs up and to the left/south on steep 5.7RX snow ramps to the horizontal band guarding the bottom of the Borah, Borah, Borah slot. This slot can be soloed, conditions permitting. The crux is a shoulder-wide and short vertical step, WI3. Continue up the couloir to the top of the Northwest Ridge. For more details on this approach, visit the Borah, Borah, Borah route page. 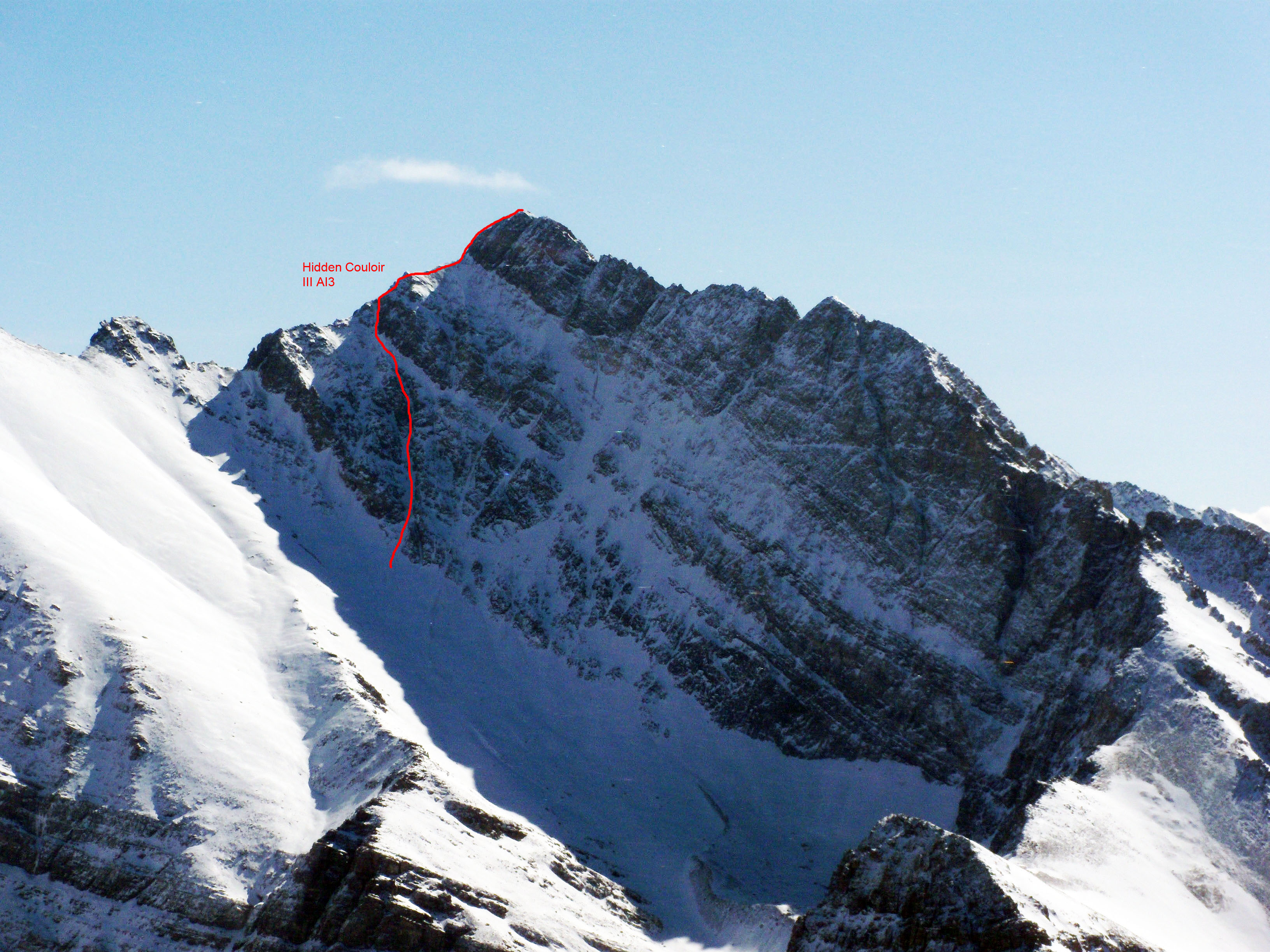 The Hidden Couloir is often overlooked because it can’t be seen without hiking above the start of the other North Face Routes. Because of its exposure, this route is often the first one to start showing ice in the late Summer and Fall. This is one of the shorter couloirs on the face and finishes on the Northeast Ridge. Access is the same as for the other North Face Routes. An excellent trip report of this route is provided by Ralph Shelton on his site. 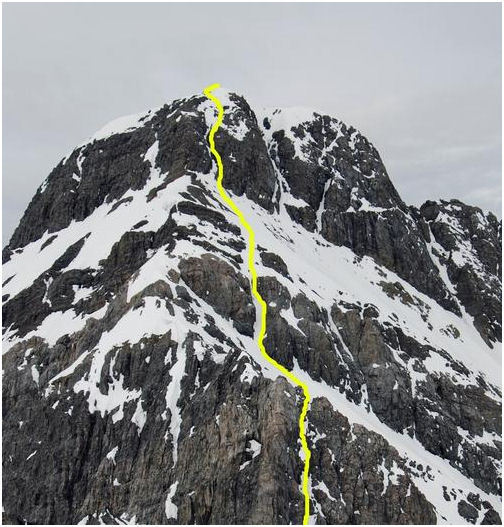 The Northeast Ridge is usually climbed by using the North Face Approach from Rock Creek (west). From the moraine, ascend the mile long, Class 2 hike to Point 11715. From here to Point 12247 feet, it is a Class 3 scramble. Traverse the 0.5-mile ridge and avoid the worst of it by staying on the right side of the ridge.

The first difficulty is the steep 90-foot step above the col. In late July 2012, we found water ice that required crampons and at least one ice ax at the start of the step. After the steep step, easy ground leads to the base of the final summit block from which there are several options depending upon the conditions. The upper Northeast Ridge can also be reached from the East Face by climbing the face to the col on the right side of the cirque. 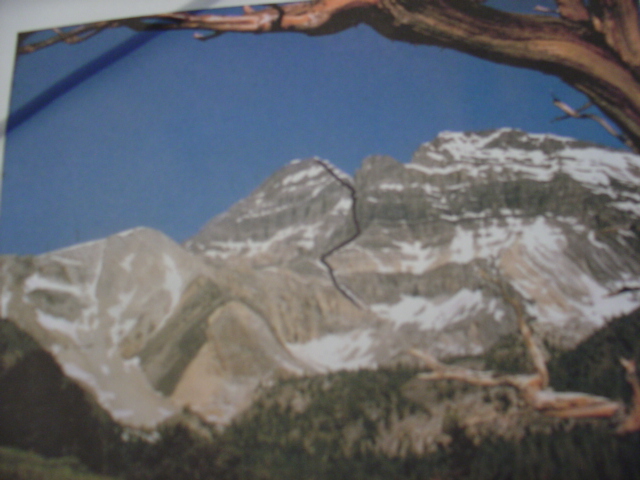 This classic route was put up in 1962 and was the first technical route on Mount Borah. The first ascent party approached the East Face from Rock Creek on the Pahsimeroi River side (east) of the range. The approach can be shortened by a couple of miles, if one drives to the campground at the end of the road on the West Fork of the Pahsimeroi River. The first ascent party rappelled down the East Face to descend back to the start. For more details on this approach, visit Bob Boyles’ East Face Dye Boyer route page. 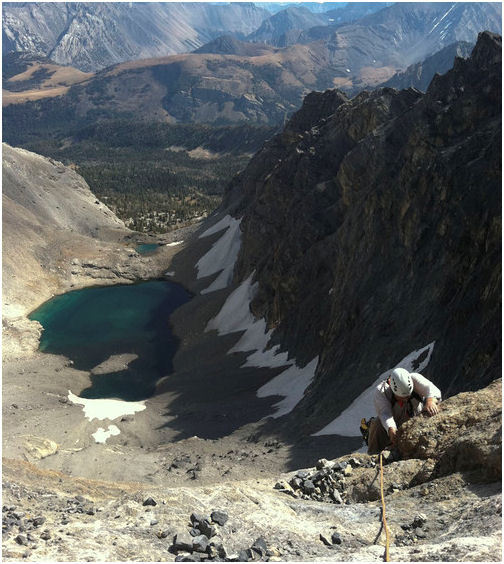 This route pretty much follows a plumb-line from the base of the mountain to the summit and is the hardest and most sustained route on the East Face to date. In general, the rock is solid and most of the climbing is mid-5th Class, with the exception of the 5.9 crux pitch. By late Summer, this route is mostly dry and, other than the snowfield at the start, this route is all rock to the summit, so rock shoes might come in handy.

The Southwest (Chicken-Out) Ridge can be used for the descent of the East Face routes, but this requires a shuttle because you will end up on the opposite side of the mountain from where you started. To get back down to the east, use the South Face Route described under the Dirty Traverse Route description. This is a dangerous way off the mountain, so use caution when using this route for your descent. For more details on this approach, visit Bob Boyles’ East Face Direct route page. 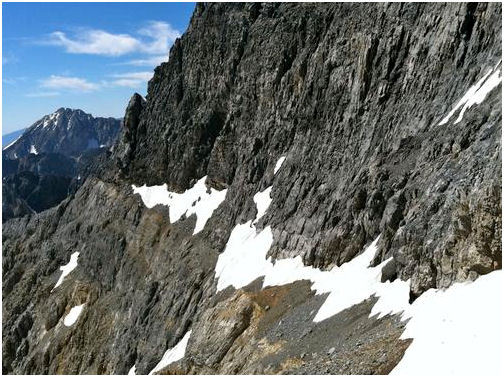 This circuitous route began as a reconnaissance trip that evolved into a free-solo push for the summit. This route takes advantage of the large, dirty ledge that cuts across the entire East Face and is mostly Class 4. Descend from the summit using the Southwest (Chicken-Out) Ridge to the start of the upper saddle at 11,800 feet. From there, drop off the East Side of the ridge and make your way down 1,200 feet of steep, chossy Class 3-4 terrain. This is a long descent over tricky ground, forcing you to pay close attention to your feet and the possible difficulties below.

There are often opportunities to glissade but the run-outs are pretty grim. The angle eases up at about 10,400 feet that makes a further descent on snow the best option. Hike down to the highest tarn just below the 10,000-foot contour line and then start working your way back to the northeast and around the East Ridge of Mount Borah. For more details on this approach, visit Bob Boyles’ East Face route page.

This route usually holds snow and ice, so an ice axe and crampons are necessary. We had to use crampons three different times on this route and encountered a short section of hard water ice at the start of the Northeast Ridge. Some years, the col can be blocked by a large cornice. Descend by way of the South Face or make arrangements for a shuttle if you use the Southwest (Chicken-Out) Ridge to get off the mountain. For more details on this approach, visit Bob Boyles’ East Face route page.