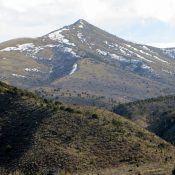 Peak 6495 is located in the Bannock Range. The peak is 3.75 miles southwest of the town of Inkom and 2 miles northeast of Indian Mountain. The peak lies on the border of public land managed by the Caribou-Targhee National Forest and the State of Idaho. Peak 6495 is best climbed from the north through public land managed by the Bureau of Land Management (BLM). This peak can be combined with Peak 5762 via a loop route for an early-season, double-peak outing. USGS Inkom 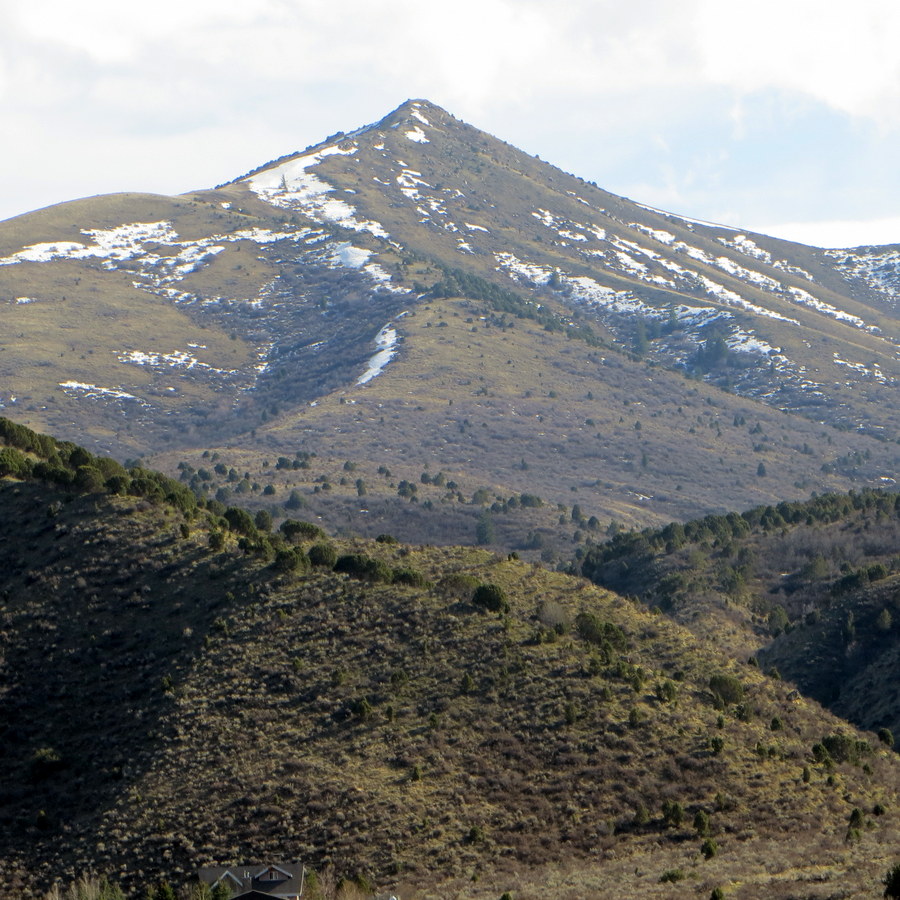 As you drive, look toward your right/south for a BLM trail marker that is next to a fence post. The marker is not easy to spot and there is no parking area or pull-off. But if you pass a private drive on your right that is signed “Dead End” or Tatonka Lane on your left, you have driven too far. When you find the marker, the only legal option to park is on the narrow road shoulder or, as we did…slightly off-road, straddling the small ditch.

Hike south through this strip of land, using one of several “paths” until you reach a gate. The gate was open in March 2017 and there was no indication that it is ever closed. Peak 5762 lies to your immediate right/west. 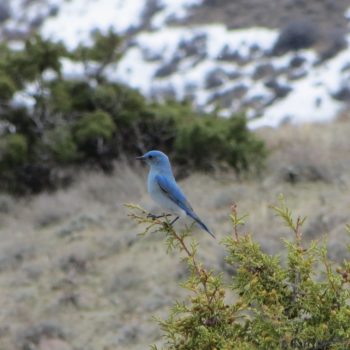 Maybe you’ll be greeted on the summit by this lovely bluebird? Steve Mandella Photo

We climbed this peak with Peak 6495 via the loop route shown in the GPS track below. If Peak 6495 is your only destination, pass through the gate and continue south on a discernible trail toward Trough Canyon. At junctions, stay to your right to stay out of Morris Canyon. Hike for about a mile. At this point, you reach another junction. Here, look for your trail to continue up a short, steep climb to your left/east.

Follow the trail until you find a point to go off-trail and hike up the peak’s north ridge. Or be impatient and immediately bushwhack through tall, thick sage and other scratchy bushes, guaranteeing to collect a few tics (two in my case), clothing snags, and body scratches along the way! 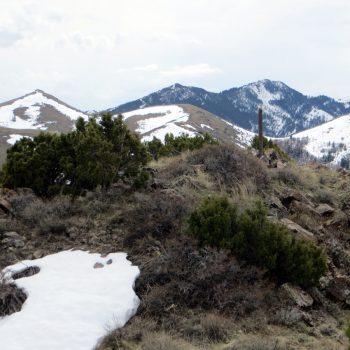 When you’ve finished enjoying the views, reverse your route to the trailhead. 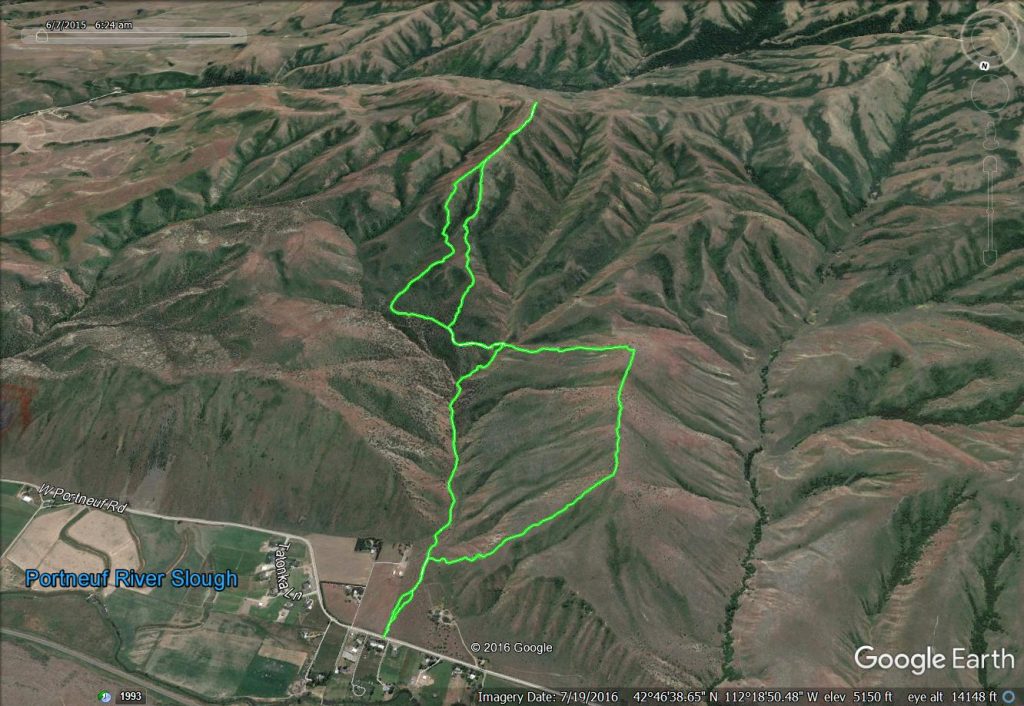 From the ridge saddle south of Peak 5762, follow the ridge south then southwest to just east of Point 5902. This saddle is flat, but is a mess of thick, tall sagebrush and brush. There are some weak trails in here, but even they are very overgrown with dense scrub/brush. Work your way south up off this messy saddle to reach easy, open scrub terrain. Unfortunately, there are few more short sections of thick brush/sage to contend with on this journey to the summit of Peak 6495. You will find a weak use/cattle trail near the ridge crest often, but not always.

The north ridge—WEST weaves a bit on its way to joining the west ridge of Peak 6495. Upon reaching the juncture with the west ridge, follow a narrow cattle trail on the left/north side of a cattle fence up the ridge. Leave the fence to climb over a scrub hump then descend to a final saddle. You will re-join the cattle fence on the descent to this saddle. From the final saddle, scramble up the ridge crest to the summit.

The cattle fence disappears early in this final ridge scramble. The terrain here is somewhat rocky and has plenty of brush/scrub mixed in. Stay on the left/north side of the ridge crest for the easiest going. The summit of Peak 6495 is a small, rock-and-scrub area. It has a summit cairn with a large post in the cairn. 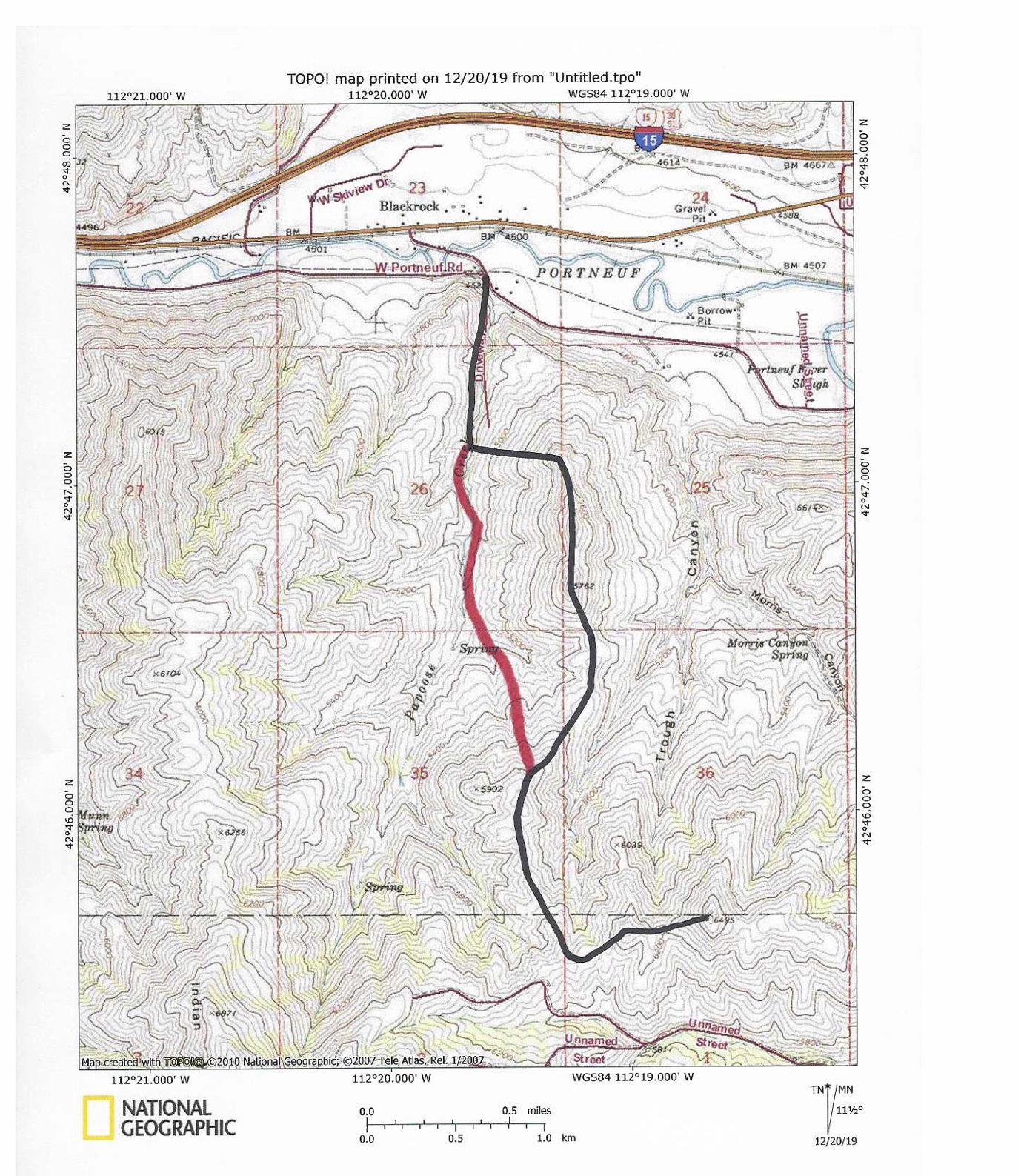 Same as for the north ridge—WEST

Descend back down the west ridge then the north ridge—WEST to reach the ridge area just east of Point 5902. From here, you have two choices. You can continue down the north ridge—WEST to the clogged saddle at the base of Peak 5762 and then descend a gully west down to Papoose Creek OR you can descend directly down the north face (mostly via a nice shoulder) to reach Papoose Creek. I chose the latter option and describe it here.

From the 5,800-foot level, descend north down a shoulder that leads directly down to Papoose Creek. It merges with a side drainage as it nears the creek. Most of this descent is on a shoulder. The shoulders here are much less clogged with thick brush/tall sage than the gullies are. Consequently, it is a much more attractive route to take. As you descend, aim to reach a cattle trail on the shoulder lower down. This cattle trail is visible from high up on the mountain. When you reach the trail, follow it down to the esat side of Papoose Creek. Pick up a good cattle trail on the east side of Papoose Creek and follow it downstream. Cross the small stream (on the cattle trail) to re-join the BLM trail. Follow the BLM trail back to Portneuf Road and your parking spot.