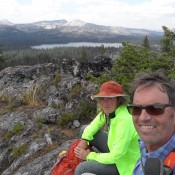 Last week John Platt completed all the ranked peaks found on the Box Lake USGS quadrangle. While many southern Idaho climbers think the world begins and ends in eastern Idaho’s Lost River Mountain Range, John has methodically demonstrated that the Lick Creek subrange of the Salmon River Mountains is a granitic wonderland for climbers. The Box Lake quad is arguably the heart of the Lick Creek Range.

John’s first peak in the quad was the remote South Loon Peak, which he climbed in 1999 during a backpacking trip into Enos Lake. He has climbed South Loon Peak on a number of occasions since that first ascent. South Loon Peak is the quintessential Lick Creek peak as it incorporates large doses of all the obstacles facing climbers who venture into the range. As John states, “the biggest challenge in climbing Lick Creek peaks is navigating and dealing with off-trail issues, especially steepness, granite blocks, slabs and towers, and deadfall.”

Thinking back on his accomplishment John comments, “When I look at all those Box Lake quad peaks, it makes my head spin remembering the difficult miles I travelled off trail.” John also added, “I think my favorite was probably “Paintbrush,” a.k.a. Peak 8610. “It’s a really cool peak that you can see (and identify) from lots of places. It is a gorgeous hike with tons of wildflowers, and I crossed the summit with my wife Julie as part of a big loop hike on a beautiful day.” Paintbrush is followed in John’s pantheon of favorite Box Lake quad peaks by Peak 8647, which John calls “Teardrop Peak” (because he made Julie cry on this ascent). “It has a nice snow ridge with a little Class 4 rock and some exposed snow climbing.”

John’s hardest day of climbing in the quad was when he and Michael Pelton climbed South Loon and North Loon peaks (located just north of the quad). In one of his typical understatements, John relates that the day “about killed me.” Considering that the day involved 20 miles, 7,100 feet of elevation gain, and 15 hours of mostly cross-country travel, I think it would have killed many of us.

John notes that technically Hum Peak, a.k.a. Hum #1 is probably the toughest peak in the quad. “You have to complete a short boulder problem to sit on the summit block. But, generally, these peaks are no harder than Class 3 if you look around.”

[Editor’s Note: I linked all these peaks, with one exception, to pages on this website where you will find links to John’s trip reports. You can also visit John’s website to read about his adventures.]