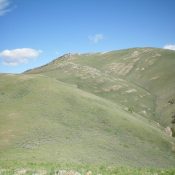 On February 26th, 1926, the Sunday Idaho Statesman published the following report by E.S. Crawford describing the origin of the name Appendicitis Mountain, now Appendicitis Hill. Bannon’s extensive surveying contributions to Idaho Surveying are discussed on Pages 14 and 15 of the book.

Answering a query of The Statesman several weeks ago as to how “Appendicitis Mountain” acquired its name, E.S. Crawford of Antelope Valley sends the Arco Advertiser the following story which adds a bit to Idaho history:

“What is now known as Appendicitis Mountain forms part of the East Canyon Wall of Antelope Valley, and is one or Antelope’s beauty spots. It is steep and rugged and rises almost from the creek bed. From the top of this mountain looking eastward, Moore and Arco can be seen.”

“In the Spring of 1915, the Hanson brothers (from Lewiston, Idaho) came through this section of the country, building monuments on the highest peaks of the mountain ranges. Among these peaks are Old Smiley, Mount Shelley, what is now known as Appendicitis Mountain and Mount McCaleb.

“During the Summer and Fall of the same year, T. M. Bannon (a geographic surveyor from Washington, D.C.) and his helper, Mr. Tucker (from New Jersey), George Adams (of Challis, Idaho) and another man from Colorado (who acted as cook for the party), came through, making maps and prints of the airline distances between these mountains.

“In the early part of September 1915, they camped at the foot of this mountain, in the grove of trees which is on the Crawford Ranch. On the second day of their stay, a trip was made to the mountain top. But as the fog and haze were so thick, they were unable to make the survey and planned on making another trip the following day. This trip, though they did not know it at the time, was never to be made by Mr. Bannon, for that very night he became suddenly ill and passed a night in pain from which morning brought no relief.

“About 8:00AM the next morning, they asked for the best doctor in Mackay and Dr. N. H. Farrell was called. Doctor Farrell pronounced the trouble as appendicitis and advised the removal of Mr. Bannon to the Mackay Hospital. As cars were few in the Antelope Valley, a bed was made in the back of a white-topped buggy and a trip of 20 miles, over not any too smooth roads, was made. This was Doctor Farrell’s first operation case after coming to Mackay, which proved to be a serious as well as a successful operation and Mr. Bannon (in writing to Mr. Crawford after he had recovered returned to his home in Washington, D.C.) wrote very highly of Doctor Farrell and the nurse, Miss  Hendickerson.”

“Although lung trouble set in after the operation and Mr. Bannon had to spend a great deal of time in Ashville, North Carolina, he finally recovered from that and died from some minor ailment in either 1918 or 1919. In one of his letters to Mr. Crawford, he told of naming this mountain and having it put on record in Washington, D.C. as Appendicitis Mountain.”