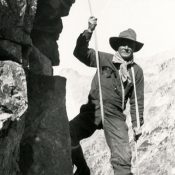 Idaho is a virtual sea of mountains. While there is no doubt that Native Americans rambled across the state’s mountain summits and that explorers, trappers, miners, ranchers, surveyors and locals were climbing Idaho’s mountains from the time Lewis and Clark first passed through the state, there are few recorded accounts of these early ascents.

When I wrote Idaho: A Climbing Guide, I noted at the time the second edition was published that “The following [Climbing History] is a thumbnail sketch of Idaho’s mountaineering history, filled with unfortunate, but unavoidable gaps.” In the intervening years, I have searched for additional accounts of Idaho climbers to fill in the gaps. I recently came across a couple of 92-year-old Idaho Statesman articles that answered one of my unanswered questions about the Sawtooth Range.

The birth of modern Idaho Sawtooth mountaineering has historically been credited to Robert and Miriam Underhill. Robert, a Harvard philosophy professor and an Appalachian Mountain Club member, was a cutting edge American mountaineer in the 1920s and 1930s. Miriam was the top American female climber of her time. They climbed in the Sawtooths in 1934 and 1935 and then published articles in the Appalachian Mountain Club’s journal, Appalachia, in 1934 and 1935. No doubt, these articles awakened the wider climbing community to the Sawtooth’s impressive granite peaks but who told the Underhills about the Sawtooths?

It turns out that the link between the Underhills and Idaho was Norman Clyde. Norman Clyde (1885-1972) was unquestionably one of the most prolific Sierra Nevada explorers and climbers. He is credited with more than 130 first ascents in the Sierra, has a peak, a minaret and many routes named after him. Less well known are Clyde’s climbing adventures in Montana, Wyoming and Idaho. Yes, Idaho. Although a very obscure fact, in 1927, Clyde climbed in both the Sawtooth Range and the White Clouds.

Clyde’s visit to Idaho was first noted in a September 10, 1927 news clip in the Idaho Statesman:

HAILEY — Norman Clyde, who makes a specialty of guiding parties on mountain climbs, is in the Sawtooth country looking for new territory and has ﬁnished climbing a number of the major Sawtooth peaks, including some of the White Cloud peaks and Castle Peak. He reports that Castle Peak is not so hard to climb as the Grand Teton, where he conducted a party last year, but is a mountain that will appeal to mountain climbers. Mr. Clyde’s home is at Independence, California.”

The first Clyde article published by the Statesman was a shortened version of his  longer, unpublished  article, A Glimpse of the Sawtooth Mountains of Central Idaho. The Statesman article was entitled A Southerner’s Glimpse of the Sawtooth Mountains. It appeared on June 2, 1929. This article recounted his ascent of Decker Peak and described the rugged crest.

“Arriving at the crest of the ridge, I came upon a trail leading toward the summit of the range. This I followed until it terminated near timber line. To the southwest, beyond rocky cirques, the summit of Mount Decker came into view. Here it was necessary to drop down several hundred feet in order to avoid an impassable crag.”

Despite suffering from a violent toothache, Clyde pressed on. He recounted:

“As I advanced, more and more of the rugged crest of the range came into view. After surmounting several craggy and glaciated pitches, I reached a talus slope just below the summit. Seized with the elan that fills me when nearing the summit of a mountain, I soon traversed this and scrambled up to the crest of a narrow arete which I followed to the highest point of the peak.”

Clyde then described the view in terms that make climbers grab their packs and head for the mountains:

“The panorama that lay outspread around me was thrilling. For a score of miles in either direction extended the crest of the Sawtooths—a maze of craggy peaks, deep cirques, narrow ridges and pinnacled knife-edges. Azure lakes lay ensconced in verdant timbered bowls of the lower basins while others lurked in rocky cirques, tinged with a shade of turquoise; one with an indescribable amethystine hue. Masses of snow clung here and there to precipitous slopes, while several remnants of almost vanished glaciers appeared in sheltered depressions. Fleecy clouds floated slowly past, crossed the Sawtooth Valley and gathered about Castle peak and the White Cloud peaks. In every direction, range after range extended to the horizon. To the north, the broken crest of the Sawtooths continued for a considerable distance. To the southeast, undulating lines varied by several precipitous mountains faded away in the distance. To the east, beyond the Sawtooths were the high masses of the Boulder and Hyndman groups .”

The second of Clyde’s three Idaho articles, An Ascent of Castle Peak, was published in the Idaho Statesman on June 9, 1929. His article doesn’t mention if he found evidence of a previous ascent but does constitute the earliest description of a climb of the White Cloud Peaks giant.

Clyde made his base camp for his Idaho explorations at the F.W Shaw Ranch near Obsidian. He undoubtedly learned about the lay of the land from his hosts. Following, this advice, he approached Castle Peak via Fourth of July Creek. He climbed an unnamed peak along the way, probably the still unnamed Peak 10405, and then made his way of into Chamberlain Basin and the lake below Castle Peak’s South Face. The next day he climbed up the face, writing:

“Leaving camp early on the following morning, I was soon trudging up the steep slope that rises to the east of the lake to an elevation of about 1,500 feet above it. As I surmounted it, I came into full view of Castle Peak, towering above a lake-studded basin a few hundred feet below me. A number of steep chutes seemed to rise almost vertically toward its summit, which appeared to consist of a series of pinnacles of almost equal height. One chimney, just to the left of the summit almost reached it but, as the apparently perpendicular wall above it appeared to possess few holds, I decided to go to the east and ascend its Southwest Shoulder or attempt to find a way up–another.”

“. . . Crossing above one of them, I made my way up a a broad stretch of talus and then up a chute, broad and gently sloping at first, but soon narrow and steep. After reaching its head by a somewhat difficult scramble, I crossed one narrow arete to another and went toward what appeared to be the summit, but upon reaching it I found it to be only a point on a jagged knife-edge, with another higher one to the east, beyond a deep gash in the arete. Dropping down several hundred feet, I quickly climbed to the top of it. Probably the highest point on the mountain, but several pinnacles of almost equal or possibly greater height were seen to the east. . . .”

Thus, Clyde was confronted with the same question that still confounds climbers 92 years later: which point on Castle Peak’s ragged summit ridge is the true summit? He continued:

“To make certain of not missing the highest point of the mountain, I proceeded to climb the other pinnacles. As I worked my way along the cliff, surmounting one after another of them, I found interesting but not very hazardous climbing, except possibly in one instance where I carelessly stepped on a loose mass of rock that suddenly gave way. Fortunately I had a good handhold, and after hanging in partial suspension for a few moments I was able to proceed along a narrow shelf. Eventually I came to the last of the higher pinnacles.”

No doubt the Idaho Statesman’s publishing of Clyde’s articles and similar articles gave local climbers further reason to explore the Idaho mountains.  How did Clyde inspire the Underhills to travel form their home at Harvard to Idaho?

Clyde was a member of the Sierra Club. In 1931, Sierra Club officer Francis Farquhar invited Robert Underhill to the Sierra Nevada to teach the latest techniques of roped climbing to Sierra Club members. Clyde was part of this group. Given Underhill’s drive to explore mountains world wide, there can be no doubt that he and Clyde exchanged climbing stories over a campfire.

The link between Clyde and the Underhills led to the opening of the Sawtooth Range to a cosmopolitan, out of state, array of climbers including Fred Beckey, Luis Stur, Gordon Webster, Steve Roper, Bill March, Jeff Lowe and the Iowa Mountaineers. Idaho climbers followed these climbers and established themselves in the Pantheon of Sawtooth Climbers. Lyman Dye started the first Sawtooth climbing guide service and he was later followed by Kirk Bachman who established Sawtooth Mountain Guides. Reid Dawdle, Ray Brooks, Dave Bingham, Kevin Swigert, Jeff and Kelly Rhoads and many others redefined and refined the Sawtooth climbing ethic which started with Norman Clyde’s 1927 visit.

Read more about Norman Clyde in Wikipedia and in the Adventure Journal.