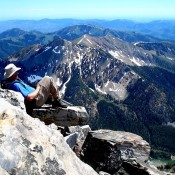 George and his friend Johnny Roache were the first climbers to climb all of Idaho’s 11,000+ foot peaks. George reports that back in June 2006, he crawled off his couch to climb Lost River Mountain with Dave Pahlas (his co-worker), Johnny Roache (long-time friend) and Pat McGrane (John’s co-worker). During the climb, he got bit by the climbing bug somewhere between the snow climb up and the glissade down the Super Gully. Afterwards, he set a goal to climb all of the Idaho 12ers which he completed 6 weeks later. That September, George and Johnny attended their first Idaho Summits outing and unknowingly began their 11er journey on Hidden Peak and Wet Peak in the Lost River Range. They completed the Idaho 11ers 6 years later.