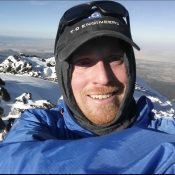 Mark Jones was raised in Cincinnati but fell in love with the mountains on his first trip out West in 1995. He moved to Idaho in 2011 and hasn’t looked back. He has hiked in the hills around Boise extensively but also loves exploring the Owyhee Canyonlands. He makes an annual trip to the Grand Canyon in Arizona and is diligently working on his “Alpine 88” peak list. In 2011, he hiked 600 miles across the Colorado Rockies, climbing over 50 peaks along the way. In 2015, he married fellow climber Tory. They had met on a backpacking trip. His favorite trips are climbing mountains with her and their Belgian Shepherd Vuyo.